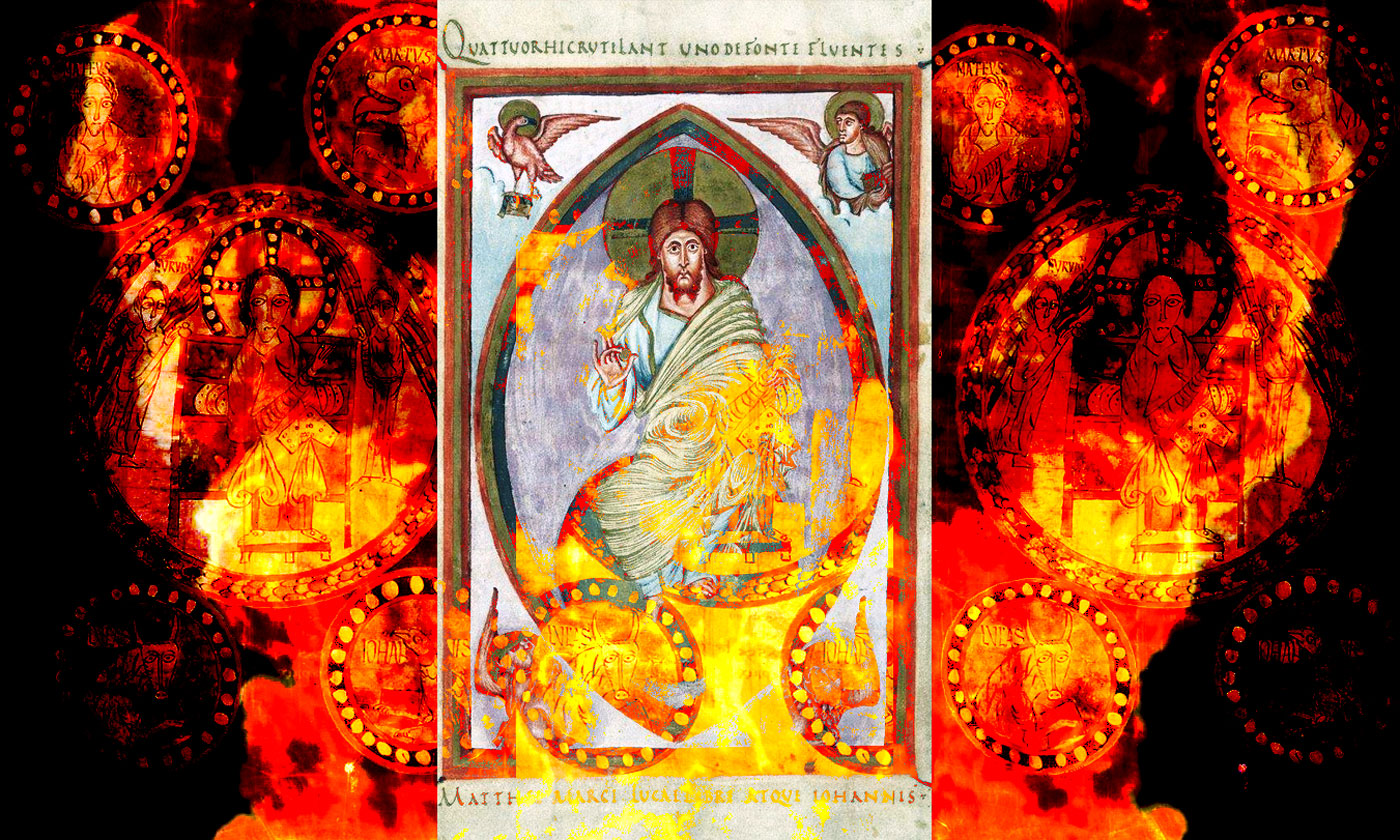 The Tetramorph, these four winged mythological beings that Christians associate with the four evangelists, are the Angel, the Eagle, the Bull and the Lion. The first two have wings by definition. More singular are the wings of Taurus or Lion. Would it be constellations? Should we see there an indication of the origin of an extraterrestrial people?

Several superior extraterrestrial species looked at the cradle of the blue planet when she was a baby, and after. This is what some authors think, relying on various matching traditions. Could it be that visitors to the constellations of Taurus and Leo are two of these good fairies? Which would justify the wings to the bull as to the lion: they came flying from these constellations. Yet the other two figures composing the Tetramorph, that of the Man, or rather the Angel since he has wings, and that of the Eagle, are not part of the zodiac constellations. An investigation is needed, can it shed light on this mystery.

The Tetramorph, symbol of the four evangelists, did not impose itself from the start. They were first brought closer to the four great biblical prophets, Isaiah, Jeremiah, Ezekiel, and Daniel, before being compared to the four cherubim surrounding the throne of God. Then, long after, the Christians went to fetch the four creatures of the Tetramorph, borrowed from the Old Testament. 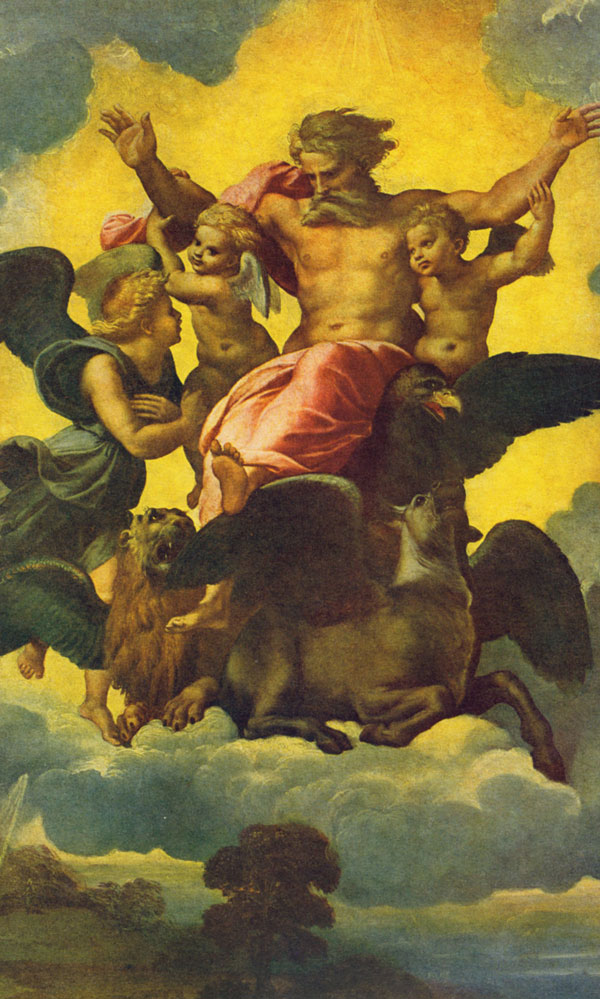 Ezekiel (Ez 1: 1-14) describes a vision: “The heaven opened and I saw divine visions” (Ez 1: 1). “In the center, I discerned something that resembled four living beings” (Ez 1: 5). “They had four faces each, and four wings […] their hooves were like oxen’s hooves” (Ez 1: 6-7). “As for the form of their faces, they had a man’s face, and all four had a lion’s face to the right, and all four had a bull face on the left, and all four had a dull face. eagle.” (Ez 1, 10). They are four identical celestial creatures, each with four bull legs, four eagle wings, four human hands, and four different faces of man, lion, bull, and eagle. These four creatures have their place at the foot of the throne of the glory of God.

Another mention of the Tetramorph appears in the apocalypse of John, which evokes the four creatures around the throne of God: “The first animal resembled a lion, the second a young bull, the third had a human face, and the fourth looked like a human face. an eagle in full flight.”

Saint Jerome (348-420 CE) explains the choice of the evangelists: – the man was attributed to Matthew because he begins his gospel with a human genealogy of Jesus (Mt 1, 1-17) – the lion to Mark because from the first lines of his story he evokes “the voice that cries in the desert” which can only be the roar of the lion (Mc 1,3) – the bull, sacrificial animal par excellence, to Luke who begins by the story of the sacrifice offered by Zacharias to the temple of Jerusalem (Lk 1,5) – the eagle to John because this evangelist reaches the summit of the doctrine as the eagle those of the mountains. (source)

I doubt it … it’s a little far-fetched, my good man Jerome. Besides, St. Ireneus of Lyons (circa 180) had already compared the four evangelists to the figures of the tetramorph, to the nuance that he attributes the eagle to Mark and the lion to John. (Source) Good. The exegetes are not too sure of their business. It is as if these four figures, already present long before Christianity, were still the subject of a vernacular cult, and that it seemed appropriate for the young church to retrain them to justify this ancient cult by Christianizing it. The first Church Fathers abused this strategy, recycling parties in honor of Mithra, Isis or Lugh. Pagan celebrations have become Christian festivals, even distorting their essence, thus ruining spiritual efficacy.

The syncretism of the young church of Jesus has created a great confusion of symbols, prophets and rites. The result was a spiritual mess that centuries and councils only multiplied and generalized, until the Second Vatican Council where the apple of John XXIII absolutely denatured the ritual of the Mass he dissociated sacred sites, changing the place of the high altar and the position of the celebrant, which, for all geobiologists, proceeds from a reprehensible ignorance or assumed cynicism. It seems that this Pope, after the suppression of the Mass in Latin, wanted to give the coup de grace to his already decadent religion in Europe.

It has been understood that the tetramorph has not been created by Christians. It has “a more distant origin, the four guardians of the world or the four carriers of the sky arranged in the four corners of the firmament of the ancient East. We recognize the stellar symbols of the zodiac of the “fixed cross” which are the bull, the lion, the scorpion and the aquarius – the scorpion being replaced by the eagle and the aquarius by the man.” (source)

The zodiac has three crosses: the cardinal, fixed and mutable crosses. If astrologers now take the cardinal cross as its origin, it has not always been so. For a long time it was the fixed cross. The Babylonian texts always begin their enumeration of signs by the fixed sign of Taurus. The Hebrew and Arabic languages ​​have as first letter of their alphabet Aleph and Alif which precisely means “bull”. Scorpio, Leo and Aquarius also belong to the cross of the fixed signs. This cross reminds us of the time when the zodiac was marked by the brightest stars of these signs: Antares for Scorpio, Regulus for Leo, Aldebaran for Taurus. These four signs constitute the figure of the Tetramorph which is found several times in ancient literature. The prophet Ezekiel saw these four signs in his vision of the heavenly throne. Oedipus confronted the sphinge: his body is that of a bull, his chest is that of a lion, his wings are those of an eagle (often symbolic equivalent of Scorpio) and his woman’s face that of Aquarius.

“The Babylonians always begin with the fixed sign of Taurus.” Here is a truth that requires reflection. For me, Taurus was a feminine sign originally, which was masculinized when the nascent patriarchy wanted to erase all memories of matriarchy, the time when goddesses walked among men. 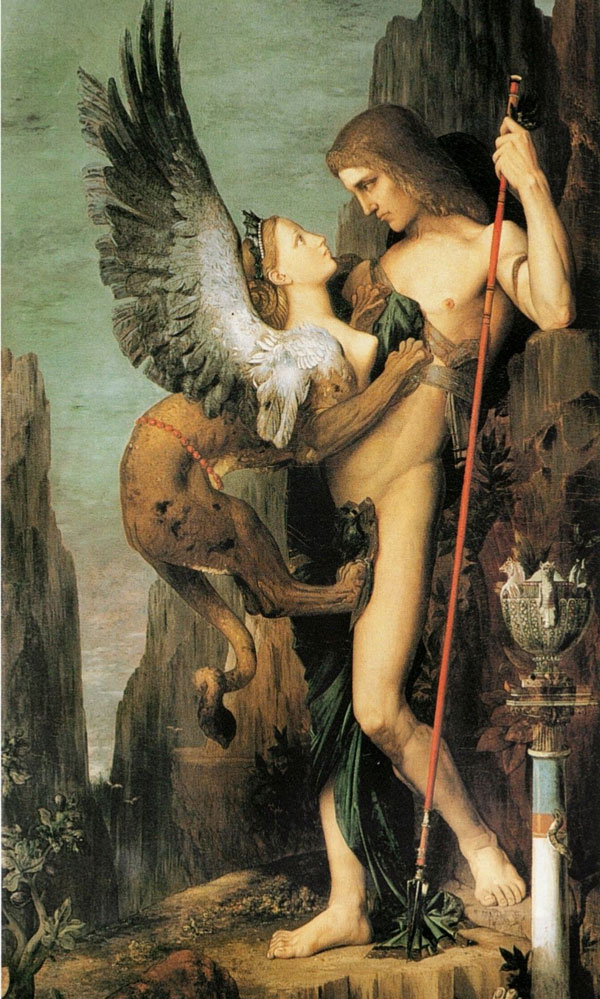 The Sphingefemale Sphinx is represented as a hybrid being, half human, half stupid, with a head and a woman’s bust on a lion’s body with a pair of raptor’s wings. It borrows its appearance from the Egyptian Sphinx which also has a leonine appearance but is male, with a pharaoh’s head. According to P. Legendre (1988), the sphinge name comes from “sphiggô”, meaning “to tighten, to bind tightly, to tie”. It is literally “strangler”. According to Euripides, the Sphinge came from Ethiopia and was sent by Hera to punish the Theban who had outraged her. Asclepiad states that the Thebans were led to meet each day in assembly to try to solve the enigma that the Sphinge was asking them to stop removing them one by one to devour them.

As we can see, the She-Sphinx of Greek mythology unites in its person the four creatures of the Tetramorph. As such, it can be considered as the very first version of this symbolism to the long story. Is she a succubus, an extraterrestrial goddess eager for fertilization by beautiful young people she devoured after mating, like the praying mantis, or more simply a prophetess speaking enigma?

She was probably a bit of both. “The Sphinx was not a wild beast, but a prophetess who gave the Thebans difficult-to-understand oracles, and destroyed many among those who had taken her oracles upside down.”  (source)

In any case, this affair seems to me to be related, again, to the protohistoric conflict between the Matriarchs and the emerging patriarchy. Powerful in sexual magic, fascinating haunting, awakened with sharpened mind, seer, wanderer, prophetess, dangerous crooner of men, insubordinate and domineering, the Sphinge looks too much like Lilith! Is she one of her daughters, or is she her mother? Why does the legend give it these animal attributes? Is it still to indicate its quadruple stellar origin? Would she be the heiress of cultures from the four constellations of Taurus, Gemini, Scorpio and Leo? There are some beautiful people, all of a sudden, on our little blue planet! Is this a way of telling us that the four founding peoples of the human race # 5 were under the governance of women? I have this hypothesis in a corner of my aura, very warm, where I store my virtual drawers. One day soon, I will be ready to tell you through the epic menu of the Great Goddesses, the trinity Isis-Hathos-Hera, queens of heaven and mistresses of the earth. A day that will come in its time. 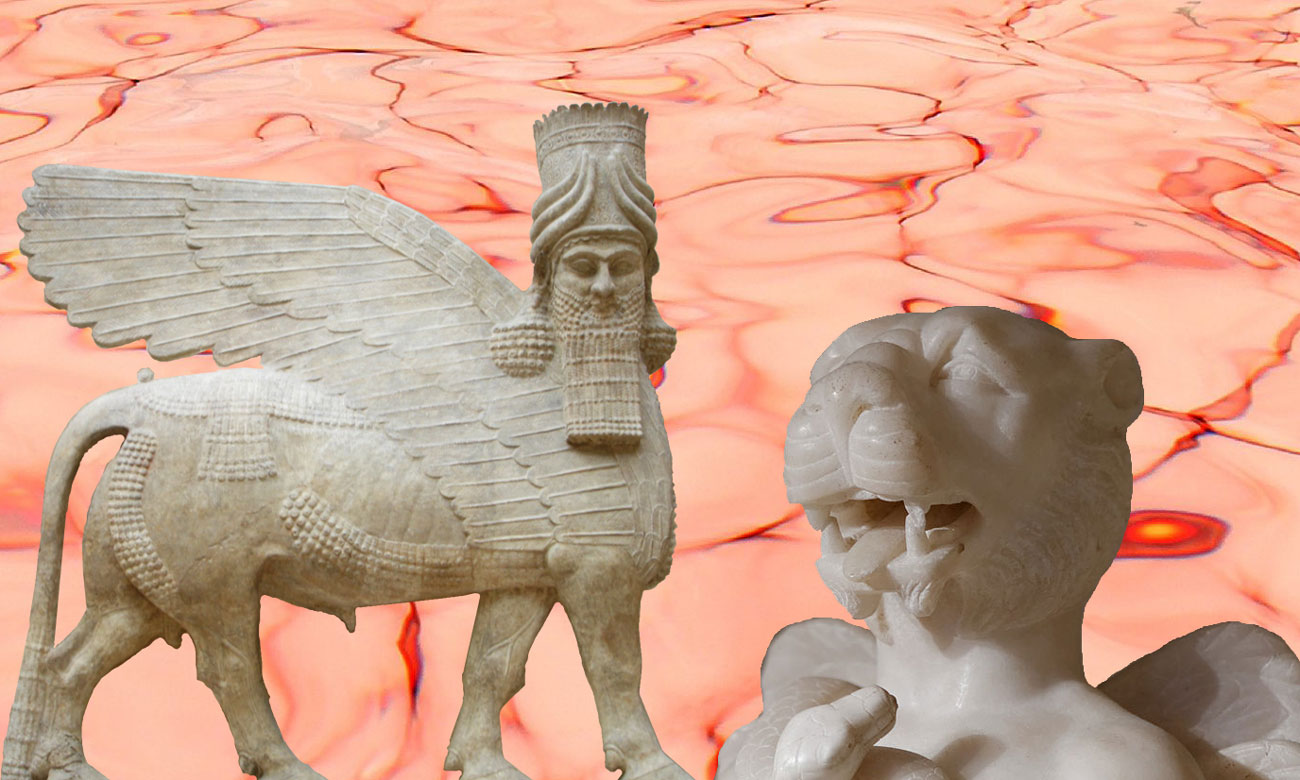 Now back on topic. Above, the winged bull, object of worship in ancient Babylon around 750 BCE. Near him, this lion-headed winged man, said leontocephalin, straight from the Mithra cult, about 380 CE. More than a thousand years separate them! And there is more. One of the oldest statues discovered to date (around 3000 BCE) is also a leontocephalin, a human figure with a lion’s head. To view it, please click here. These curious hybrids haunted for a long time the imaginary of primitive religions. Christians have only recycled them, but the original meaning has been lost over the centuries and mutations. Could it be that they existed for real?

Think of the hybrid gods of ancient Egypt, think of those of the Hindu pantheon. Did they have a reality? The investigation is just beginning.

Already I can give you my feeling: this is the clumsy description of a flying machine. The comparison with the merkaba seems to me sufficient. In the excerpt from John’s Apocalypse, “The first animal looked like a lion, the second like a young bull, the third had a human face and the fourth seemed like an eagle in flight.“

The first two animals are not such: they express the fighting power and ferocity that all the angels of Yahweh, marshal of the legions of angels, had. He who has a human face is also an angel, and not a man. in most medieval representations of the tetramorph, the Man is winged. He is an angel. The last one, the Eagle, still reinforces the idea of flying characters.

Ezechiel is more explicit : “They had four faces each, and four wings […] their hooves were like oxen’s hooves” (Ez 1: 6-7). Four wings to fly with.

The four creatures that surround YHWH in its flying machine are Angels, giant creatures (about 4m) capable of flying, but without wings. Rather with a reactor to the ass. Or comfortably seated in spaceships. Let’s not forget that these scenes were described by simple people who did not know other flying beings than birds, bats, etc. All equipped with wings… 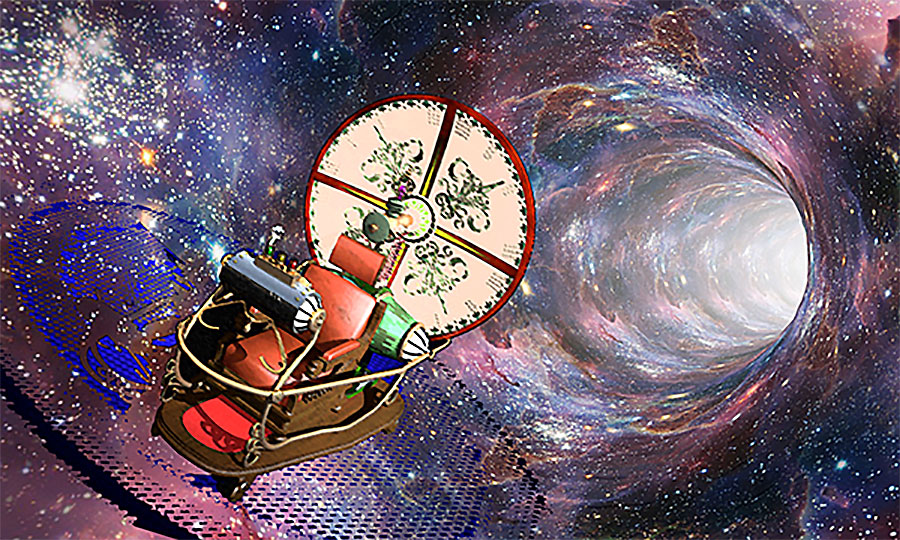