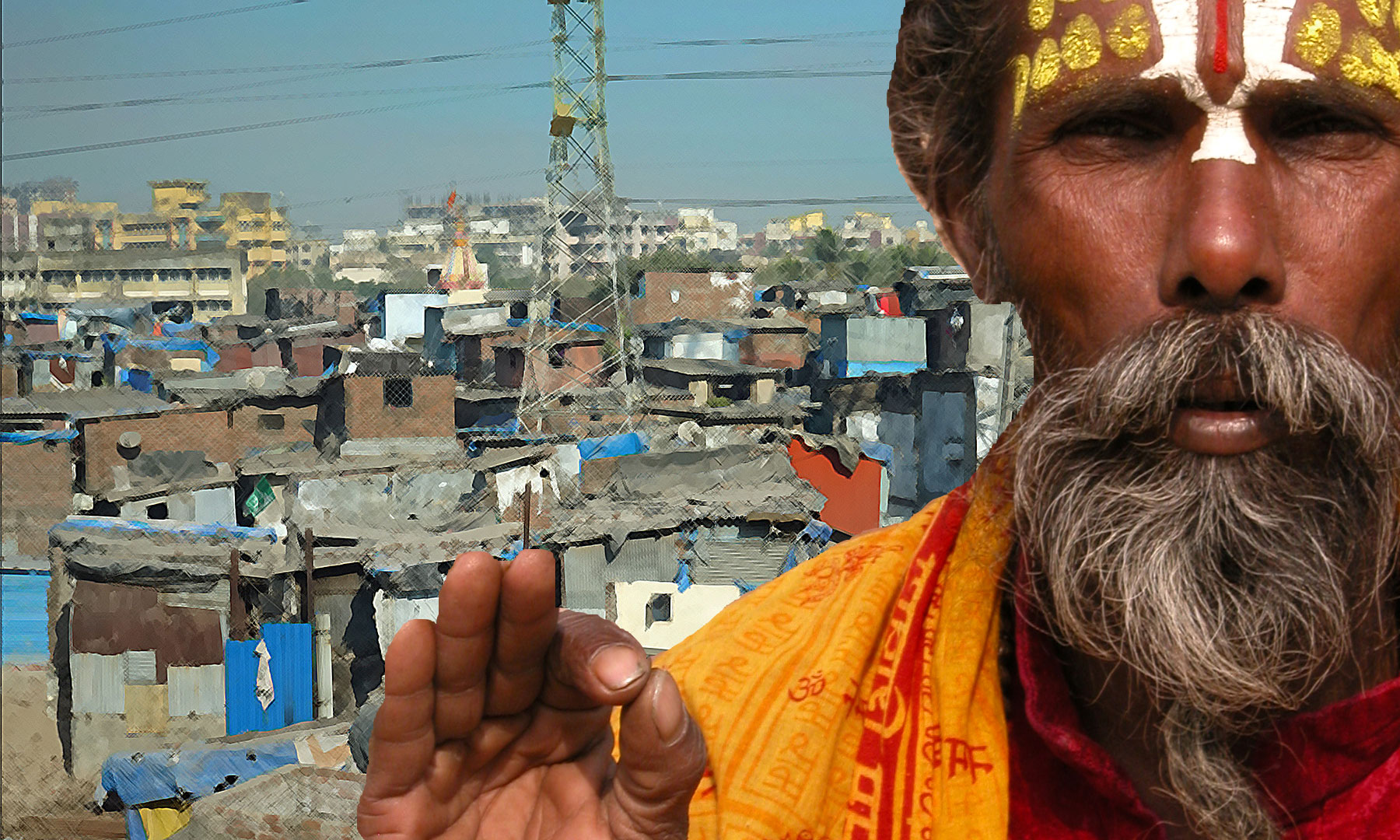 Almost half a century ago, we took the road to India with Micha, my beloved. It was our third trip to the end of the world, which was much bigger at the time. We had known each other in Turkey, with the bellicose accents of a Kurdish revolt. And then we went to stagnate long months in Macao, then in Portuguese China. In spite of that, we were still children without experience, and the arrival in India brings the proof.

Bombay, 1975. India is a shock. Saturation, excessiveness, cruel madness of the megalopolises. Everywhere crows, the big model, crash of feathers, the sparkling eye. Their hoarse screams on the yellow walls and in the shade of the mango trees. The motley crowd of street vendors, saddhus, beggars, businessmen in turban, nude women in their sarees, and British-style executives in their air-conditioned Tata. Klaxons, screams, din of large arteries where bicycles, cyclo-shoots and taxis collide covered with garish paintings. Mixed impression: I finally feel at home, and I never felt more foreign somewhere. I was going to understand that India is an incredible patchwork of paradoxes and contradictions. 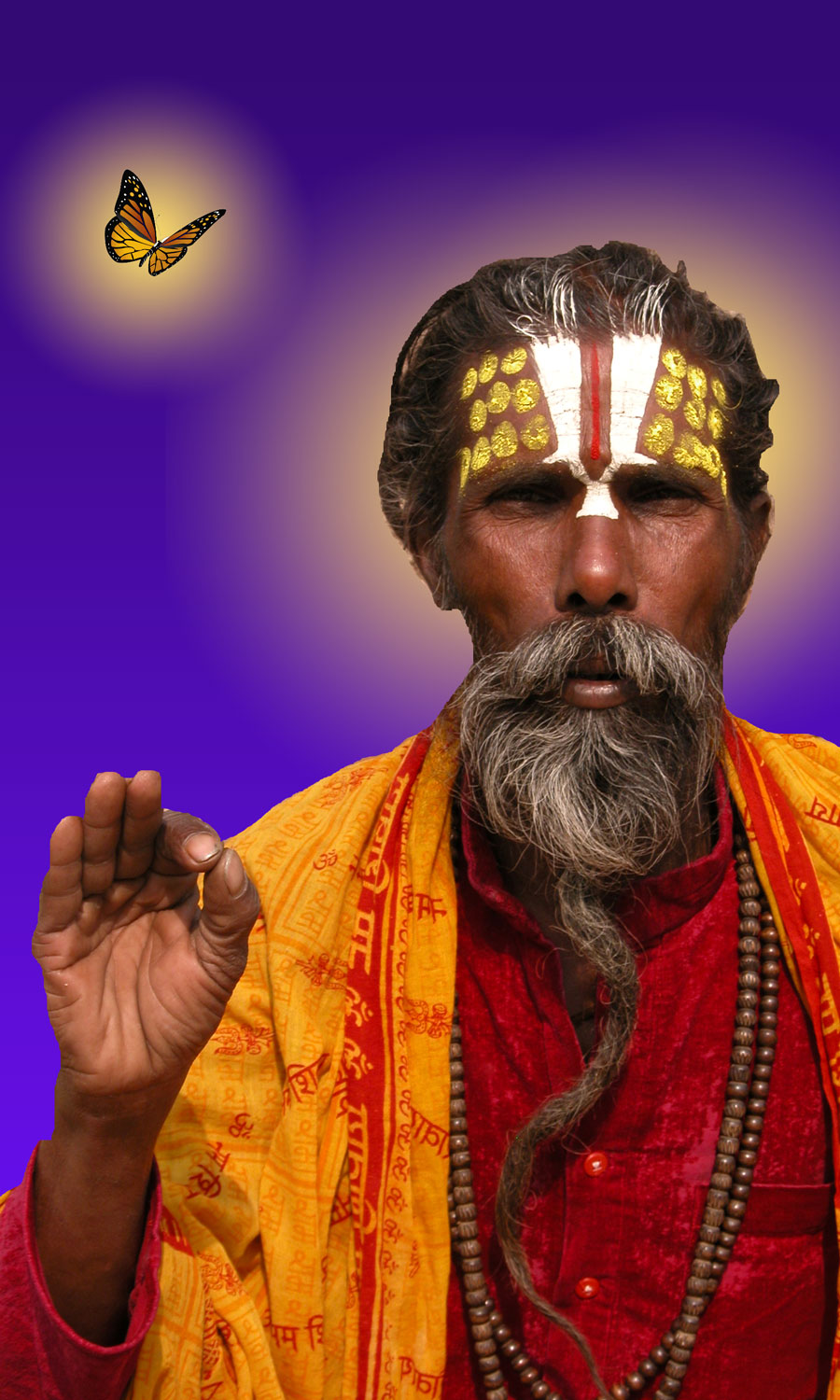 We sneak out of the crowd. In the quieter streets, a naked child holds out his hand, all the misery of the world at the bottom of his eyes. Lancinante chant of a tampura. The bright red flowers of the flamboyants, the monkeys running from roof to roof, the illusory calm of a city that never sleeps. A street kid drives us to a dirty hotel where he bargains for us the price of a slum for the night. Later, he will make us taste the local hashish, of the Black Bombay, largely cut of opium. Welcome to strange land.

The next day, drunk with new colors and scents, we stumble into a busy street when a young Westerner approaches us. He is German, but has a mix of English, French and Spanish, and smiles. Micha is suspicious, the little guy pulls me aside. By a skilful sleight of hand, this brave wizard will strip me of all my travelers checks. And all those of my sweet Micha who vociferates. These travelers checks are refundable in case of theft. We go to the Bank of India, devastated. As the main sinner and naive chief, I shit shame. At 25, a carefree student, I was a child.

Behind his counter, a model employee cheers us up. A tiny bit. He explains that there are far too many flights these days, so an investigation is needed. I disclose my complete identity, my current employer, the date of my first communion, my blood type. The employee promised us a quick result. He can not do anything more immediately. The loss of our nest egg leaves us with a little change in our pockets and our plane ticket for the return. Still very far!

Without a round in unknown land the day after our arrival! Micha is furious, there is something. I could wrap her in seven blankets, her anger would go through. A big hat to Xavier that idiot is myself who has fucked us in the shit. Scrutinizing my empty wallet, I find a phone number. That of Gilles, a high school friend who has been living in Kashmir for two years. A base in Srinagar, a good help from him, our last hope. Scrapbooking of pocket funds: we just have enough to pay for the train to the Himalayas. Two days of hard. Gilles, here we are!

By crossing our fingers, we rush to the Bombay station. Hallucinating show. Hundreds of families are sleeping in the hall, they live here, they are there at home, they wash their clothes on the rails and their needs on the ballast, some cook on a naked fire, others die in silence, is this possible in such a din? Beggars spit fat, girls in T-shirts dance seriously, cleverly, others laugh, others cry, clouds of children’s sleeves and pockets.

But it was half a century ago. Prescription. The current station is normal, old and banal, like all stations in the world. Civilized. Modern. Sanitized. Globalized. Welcome to progress.

Progress? What progress? It’s time to leave the big city. 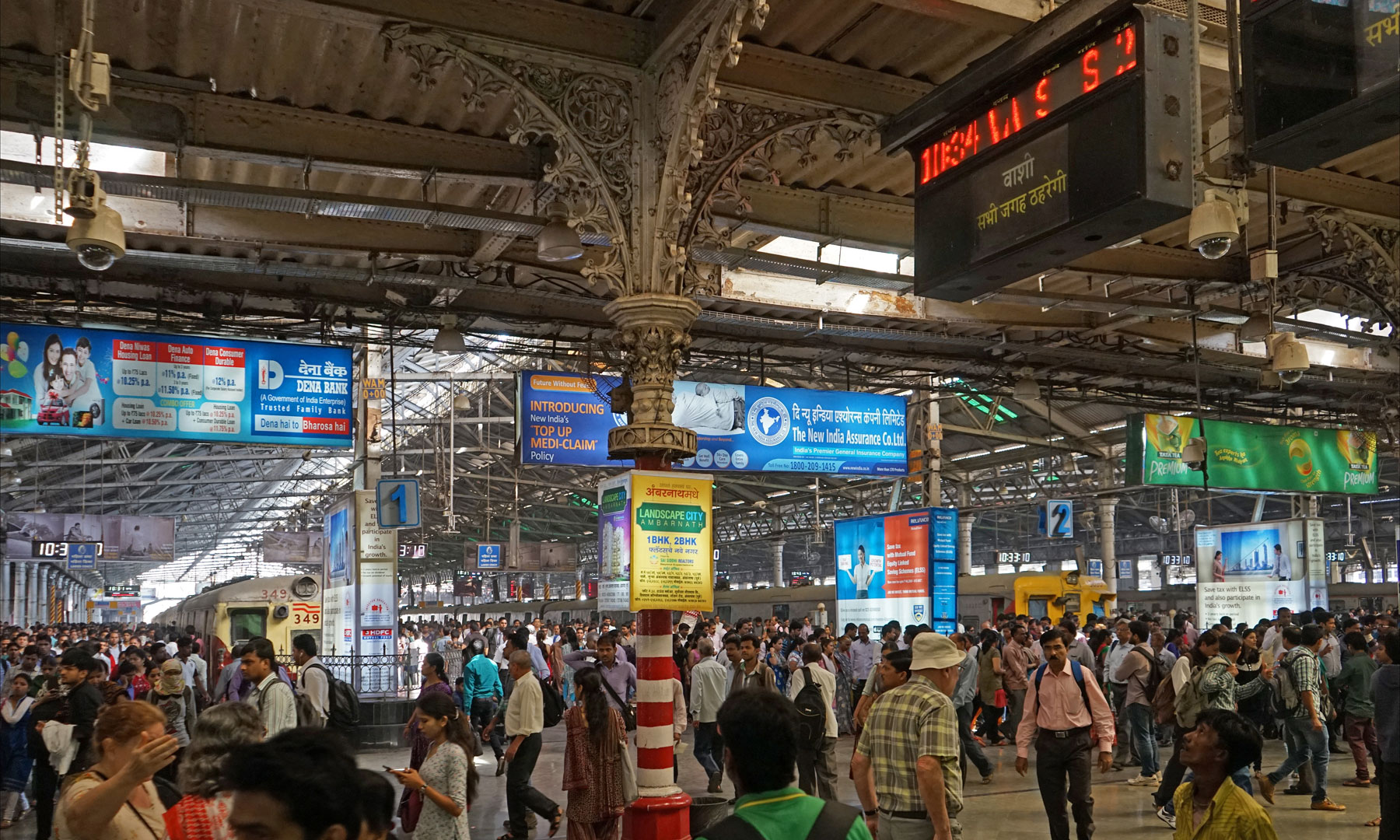 We dive into the green. I saw again. India is a shock that repeats itself. Again, deep, from the root chakra, the feeling of finally being at home. Smooth serenity of the countryside, the fields, the hamlets. Total contrast with the big cities inhuman and super speedy. The train that takes us to the Himalayas is a haven of peace. We lounging limply in a sleeper cabin just for us, in love, well done to reconcile on the pillow.

I do not know what kind of synchronicity we were able to find a place on the crowded train, because all India is rushing to Kashmir to escape the monsoon. During the two days and two nights of the trip, we have plenty of time to celebrate our reconciliation. The loss of money is forgotten, we are in the shoes of a so romantic couple of the 30s, fleeing the monsoon to win our luxury resort. By dint of dreaming his life, here we live his dream when nightmares have more hold.

Hair in the wind, dust burning in the eyes, we go to 20 km / h to Srinagar, capital of Indian Kashmir. This dapper colonial city was the summer residence of British officers, like Darjeeling further east. Lake Srinagar is covered with houseboats, carved wooden house-boats, loaded with history and hippies. But the train does not go that far. He stops in Jammu. The rest of the journey will be by bus. And what a bus!

Finally the train stops in a furious whistle, throwing steam, grinding brakes, various shocks of baggage crumbling, cries of women, crying of kids. It’s Jammu, terminus, everyone goes down. And everyone is immediately crammed into age-old buses. Dilapidated, covered with naïve art and various scars, overloaded with protecting deities and timeless travelers, these English buses make the Jammu Srinagar connection. 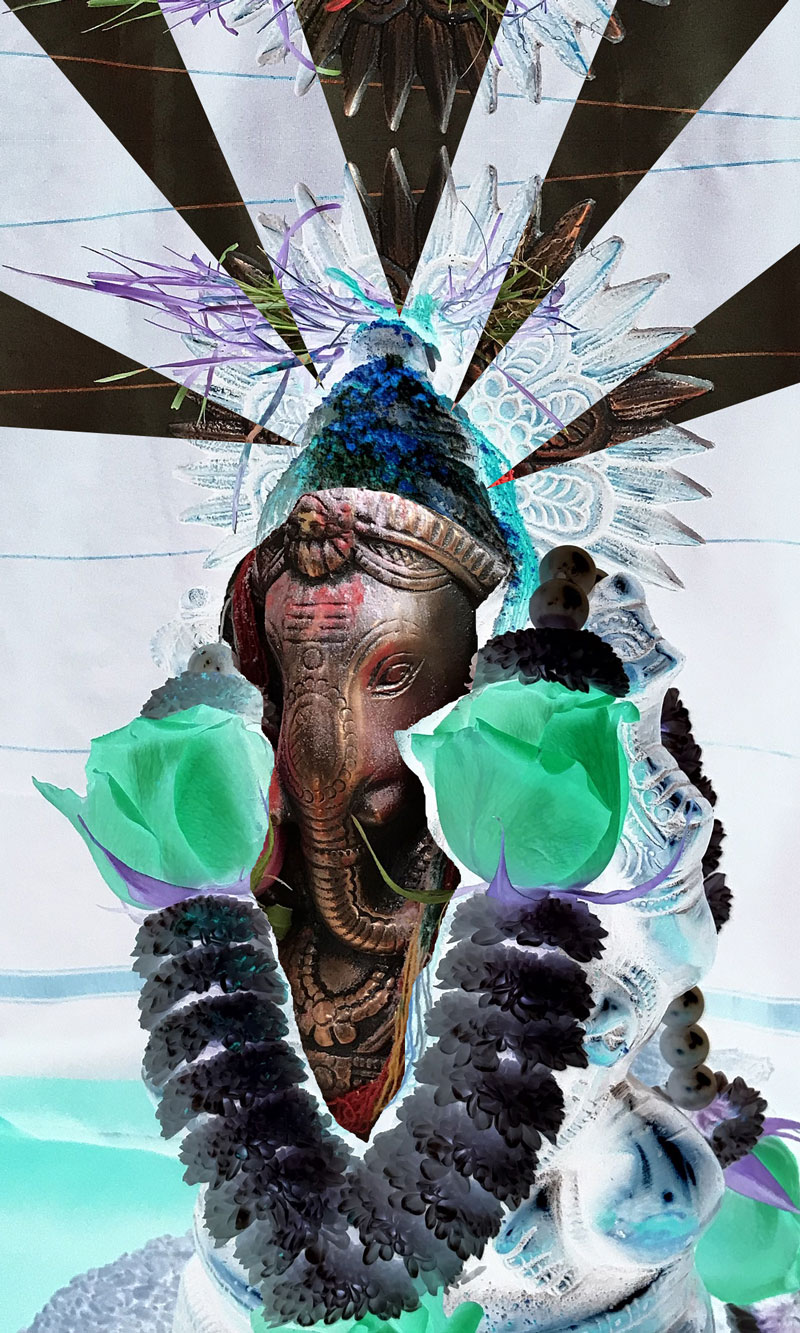 Towards the north, the Himalaya rises a bluish rampart with white peaks of snow. To say that we will have to cross this! And what a reassuring vehicle! Ahanant, rattling, he started. I sincerely doubt that he holds to the end! Near the disillusioned driver, an altar dedicated to Shiva where incense sticks burn. He also welcomes Ganesha, Mira Bai and Jesus Christ. Too strong has never failed. As well as a postcard of the Taj Mahal under a golden plastic Eiffel Tower. All protections are good to take when going on such a trip.

Soon, the cultivated countryside gave way to the foothills of the high mountains. So at the first laces. The dizzying precipices, the peaks and the overhangs, the senseless cliffs, the road gradually losing its covering, going from stony to sandy, from sandblast to slippery, the gusts of rain that drowned the windows, the wipers The dead had died at the time of Lord Mounbatten, the last Viceroy of the Indies. Improbable halt in a village well set on a plateau. We are happy to stretch our legs, even happier to be alive.

But what’s going on? Here is the driver who unloads the luggage! Wait, but we have not arrived, mess!
– Srinagar? I ask, worried. The driver makes me a sign to sleep, and shows me a hovel a little larger than the others. On the leprous facade one can decipher, well worn, the international letters of the stage. H, O, T, E, L. Ah okay. That’s where we sleep? inside, a single whitewashed room. Yellow with lime. On the floor, mats that already women unroll. We settle down, half-fig, half-reason. Picnic of chapatis and dried fruits. Tea for everyone. Without milk, thank you! And sleep.

Or almost. In there it hums, it rote, it fart, it speaks too, it whispers or whines, according to. Welcome to India Change of scenery, I think of another planet. I think about it all the time. Tomorrow, we find Gilles. Hurry to share all this with an old friend, well acclimated, very reassuring finally. And who speaks French! It stinks here. Me too. Ah! Take a shower ! And I went down. I fell like a candle that we fly. Shower or not, I slept like a stump.

The next day around noon, we arrive in Srinagar. And the magic sets in.

Take a whiff of India with the babas in 1970

The point is not to believe or not believe. What matters is to ask many questions as possible.