The meeting with the guardian of the threshold is a special moment on the path of the warrior. From this point, the road becomes not easier, but more direct. We set foot in the other world, remains to transform the test. Carlos Castaneda gives us his experience with, as usual, a good dose of self-mockery. Laughter of oneself is a powerful antidote …

We spent the morning in silence under the ramada. About 3 PM, I was a little hungry, several times I suggested we eat a piece, but Don Juan refused. He handed me his pipe stuffed with his smoking mixture. I was suspicious.

“Soon will come the guardian of the other world. You have nothing to do but watch it. Check how it moves, and all it will do. Your life may depend on the accuracy with which you shall observe it.

– Who is the guardian ?”  I asked. Don Juan kept silent … But I went on. I felt fear invading my belly.

He stared at me for a moment, then his gaze lost in the distance. I jumped on my feet.

He ordered me to sit down and relax. For a few minutes, there was complete silence.
“You want to keep your clearness, right? he said suddenly.
– Absolutely, Don Juan. It is quite right.” He laughed with obvious pleasure.
“The clearness, the second enemy of the man of knowledge, has just appeared above you …

– You’re not afraid, he said reassuringly, you’re just amazed at the idea of losing your clearness, and as you do the moron, you take it for fear” I was lying on the mat. Don Juan removed the pipe from my hands. My body became numb.
“What will happen?” I mouthed. I struggled to form my words. Don Juan laughed. He told me that I had to wait, eyes wide open, senses alert, and sooner or later I went to see the keeper.

He leaned toward me and in a breath he ordered me not to look at him, but to set a point on the mat with my left eye alone. I held the left eye on the point in question, but nothing happened. Suddenly I saw a mosquito come into my field of vision. He landed on the mat. I never turn my eye. Then he approached me, so close that my vision is blurred. Suddenly I felt that I stand on my feet in one leap. 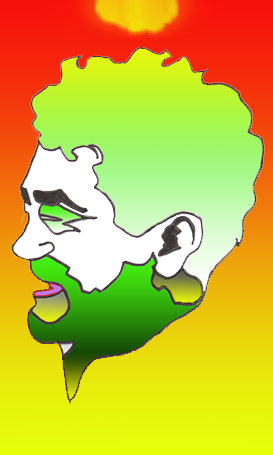 I was sure to observe the stage standing, at the usual height of my eyes, and what I saw shook me an irrepressible tremor. I was scared to death, and worse; how else to describe my panic at that moment? Just in front of me, very close, was a gigantic monster. A terrifying, excessive horror, a calamity I have never seen, not even in the worst scifi movies. I looked at the animal, dazed with stupor and blocked with terror.

Its enormous size was the worst to bear, it was about thirty meters high. It looked like standing, though it seemed impossible that such a monster could stand. Then I saw that he had two wings, short and broad wings. I came to see more details. Its body was strewn with tufts of black hair, and he shook his long runny nose.

He had bulging eyes – two huge white balls. Flapping, he gained speed and began to spin around me. It glided with surprising speed and agility only a few inches over the soil. The monster looked unsightly, yet its speed and ease kept an admirable character.

Twice it made a circle around me, vibrating its wings and projecting long streams of saliva in all directions. Then it walked away with incredible speed and disappeared in the distance.

An intense feeling of heaviness came over me, I could not think or move, I was stuck in place. Suddenly I saw a distant cloud and a moment later, the huge beast turned around me at high speed. Its wings passed increasingly close my eyes, suddenly one of them struck me violently, and I collapsed with a cry of pain and despair. (source)Carlos Castaneda, Seeing

When Castaneda recovers, he is lying at the bottom of a shallow stream, while Don Juan carefully sprinkled him with water to reconstitute his body wrapping battered by astral travel. Then he slept twelve hours or more. When waking up, his mind has taken over:

“What happened to me?”

Don Juan laughs softly. “You went to seek the keeper and of course you found it.
– Say, Don Juan, what was it?
– It is the guadian, the porter, the sentinel of the other world” he replied in a perfectly neutral tone.

Naturally Castaneda get upset, he wants to describe to Don Juan the horrible monster who so cruelly wounded him. He blamed his benefactor to have thrown him into the clutches of such an horror.

My meeting with the guardian was quite similar to his. It was not a cousin, my benefactor was more theatrical, he loved to scare his apprentices. I met the gray man of Brocéliande. One day, I will tell you this strange episode which will undoubtedly entertain you and teach you, I hope …