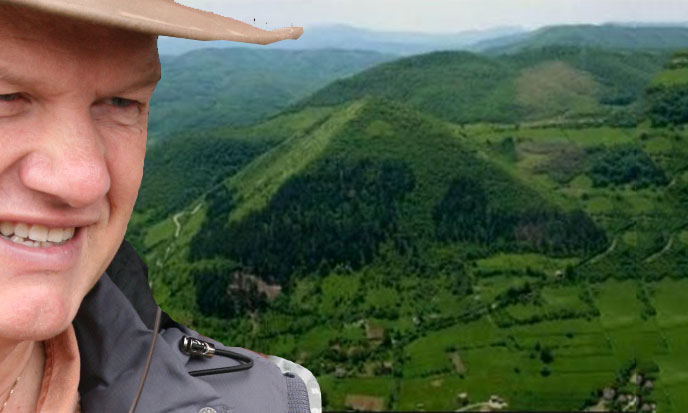 After years of real struggle against the academies and main stream knowledge, an international team of multidisciplinary researchers – archaeologists, engineers, builders … – did a fantastic job at the sites of European pyramids in Bosnia.

They recently discovered, under the thick layer of stones and vegetation, several blocks of carved stone … In brief, it seriously calls into question the definition of the caveman and the hairy look of our ancestors Homo Sapiens sapiens, proving that nothing is ever granted to man … especially not knowing. Today is curiosity, mixed with the desire to work together and intelligence that challenged formatting and ready-to-believe vision of the past imposed by those who do not see beyond their acquisition.

I smiled at the thought that the present generation of researchers is more like Howard Carter and others teachers – led by their readings, their thoughts and observations – they often thumb their noses at the mainstream history books – this biased discipline still taught in school. Wait and see, with some reason to be optimistic: thanks to the support of radar and modern technology, after four years of research, a team of archaeologists has published the results of its investigations concerning the famous neolithic site of Stonehenge.

Awkwardly fixed during last century by the British Army to make the show, the stone circle of Stonehenge in Wiltshire, England is much more than a tourist trap. It is actually part of a gigantic megalithic site including various underground formations, as 60 C-shaped aligned megaliths. In Bosnia, the discovery of deep tunnels nicely confirms the idea that a very distant tima ago, our ancestors had to take refuge in the bowels of the earth. Not to mention Turkey where underground cities of Cappadocia extend up to twelve explored levels … and it’s not over!

Very few indeed! We adopted the common and convenient practice to base our views of history on the Bible – what contemporary archaeologists no longer do since they now date discoveries universally … but we can change our way of thinking in light of recent discoveries – including the DNA present on a dino dated 6,000 years only !! The official time of dinos’ end is 60 million years!!!! Predictable outcome, the author of this discovery lost his job. You do not mess with the archaeological dogma.

Do they forget the Olmec, Mayan and Andean artifacts showing humans playing with stegosaurus? They ignore them, but not for long. Museums stand their “junk” out of hell, probably driven by the increasing thirst of fans, the British Museum is launching a major research campaign by scanning its singularities and inviting the public to define! It is time to quote the old joke that says archeology is too serious a thing to be left to archaeologists …

Philosophically, when you ask the question “who am I?” please realize the answer is blowing in the wind of tens of thousand years – if not hundreds of thousand, why not million years – since our species has been existing. We must stop to believe we are the first civilized beings, if not the only ones. Stop to believe we are the most advanced, stop to take us for the only judges and arbiters of the past. Despite flashes of light moving us, we are made of matter that makes us blind. Matter has permitted the human adventure while the same matter endangered it, covering the past with oblivion.

At a time when the so-called civilized world is acting a scary play with putrid greed and sterile wars, these findings could make us think with simplicity and humility about the fragility of our material possessions, of our societal acquisitions and we do find some common sense.

Nothing is more fleeting than a civilization … and ours made of digital media, plastic and brittle concrete, disposable and biodegradable goods does not really fits in a foreseeable period.

For a long time Eden Saga is exploring other avenues to support these findings. Another History is possible, past, present and future. And you are more likely to join the Saga, which pays the work and is somewhat reassuring.

As Calogero said, “we’re rich only of our friends” I wish you many beautiful things, to live intensely all that enlarges the heart and space, and to share life with desire and enthusiasm. (source)recherches documentaires Ludmilla Zahno