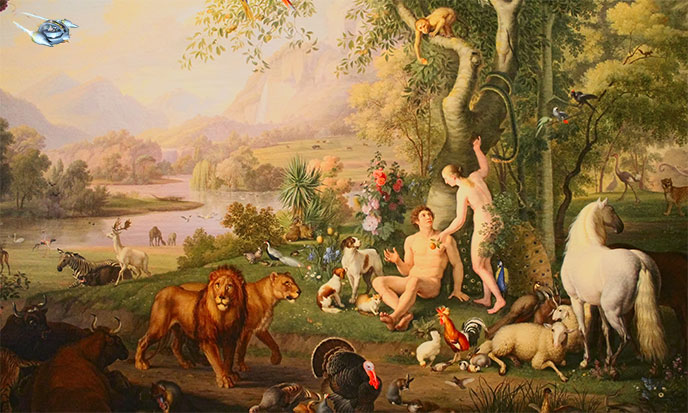 Christian iconography love flying saucers and astronauts. Medieval sculptors and painters drew shamelessly in this imagery, which is asking questions.

In the cathedral of Salamanca, there is an amazing sculpture. Any today kid will easily identify and astronaut in his usal outfits. But there is one detail wrong: the work of the cathedral began in 1513 and ended in 1733. Would it be a coincidence? Nope, because, as everyone knows, random does not exist. What does it mean? 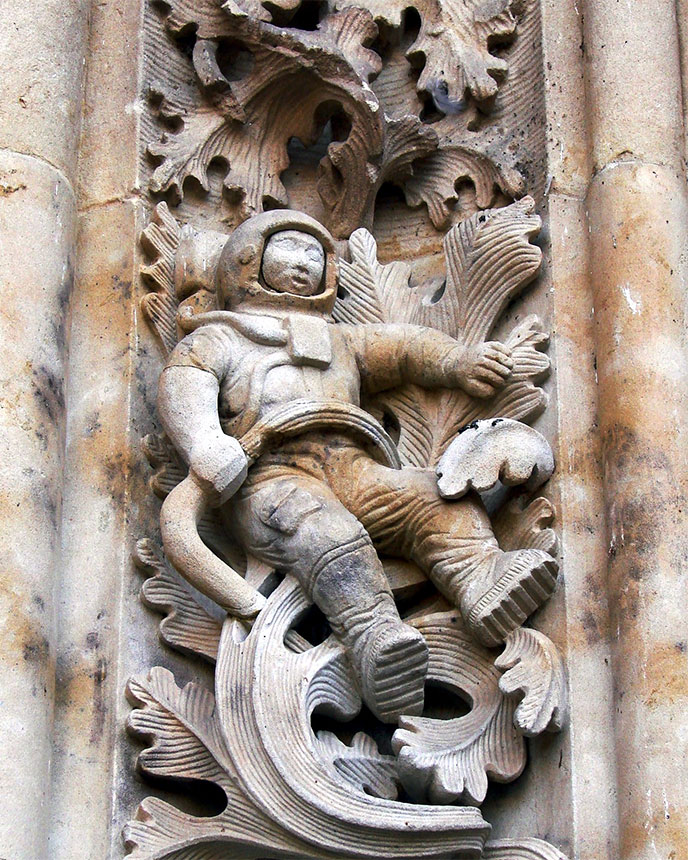 Simply this: the astronaut was added during renovations in 1992, and was not unanimously appreciated, judging by his bruised face. Since then, Salamanca Astronaut is the buzz on networks. It is important to keep a critical distance, it is as important to keep your eyes open. So you can see that the Bible and gospels mention these questions emphatically. Such as prophet Ezekiel who prophecized in the 6th century BCEBefore the Common Era

“I was with my brothers in exile in Babylon by the river Chebar, when the heavens opened. A violent wind came from the north with a great cloud, and a bunch of fire. Around a light shone. In center, there was like the luster that came out of the fire. still the center, something like four living creatures. Their appearance was similar to that of men. every one had four faces and four wings. (. ..) They sparkled like burnished bronze. ” (source)Ezekiel I 1-24

This beautiful scene seems straight out of a movie made in Hollywood. Steven Spielberg presents “Ezechiel’s encounters of the 3rd kind” or something like that. The materialization of the flying object in a blinding light, and especially the description of the astronauts who look like men, whose four wings remind Babylonian bas-relief. There is no surprise because the scene takes place in Babylon. Each of us can try and imagine what kind of flying objects -or people- are hidden behind this naive description. No doubt anyway to understand what it is all about … Will our scholars finally admit that behind their odd appearance, myths speak true?

“They had human hands under their wings, they flew in a straight line, each went straight ahead. They went wherever the spirit guide them. These beings in appearance looked like glowing embers.

Ezekiel then finds that each of these hominids is escorted (or carried?) by the wheel. What kind of wheel is it? “The wheels had a burst similar to that of the chrysolite, and each wheel looked like if it was in the middle of another wheel. They came and went, they could follow the directions taken by the four living creatures, and they flew straight ahead. Their altitude was impressive and wheel rims were covered with eyes all around.”

That’s clear enough. We recognized those good old flying saucers, which eyes all around being the windows that surround these machines. Nothing new under the sun, as you see. Wheels followed the living beings in their movements: when the living beings rose above the earth, the wheels were lifted up. They went where their spirit guided them and the wheels were lifted together with them, because the spirit of the living creatures was in the wheels.  Above the head of the living beings, the sky looked like the sparkle of a crystal. It was awesome. I heard the noise of their wings when they moved: like the noise of great waterfalls, or the voice of the Almighty, a sound that was as tumultuous as that of an army. Above the sky that was over their heads there was something like a sapphire. It looked like a throne of sapphire, and on top of this kind of throne appeared something like a man. I saw the luster like fire enveloping all around.

This kind of Astronautics quirk does not begin with Ezekiel. Remember the poetic sentence introducing Genesis: “The earth was empty and desolate darkness reigned upon the face of the deep, and the Spirit of God was hovering over the waters” (source)Genesis 1:2 We all love this very poetic and beautiful image, the spirit of God hovering over the waters … But the Hebrew text is quite different: “Ve ha-arets aieta tohou va-bohou Ve toshekhe al-pnei tehom Ve rouah Elohim merakhefet al-pnei ha-mahim.”  Rouah is the wind! And the verb merakhefet means: to shiver, to shake. So instead of: And the spirit of God hovered over the waters, we get : “The wind of Elohim fidgeted on the surface of the water.” (source)Genesis 1:2

As you see, we are far from calm an immaterial spirit hovering on the surface of still water. It seems that we are rather in the presence of an aircraft, VTOL or helicopter type, a UFO moving in the air, and whose breath – the wind it causes – agitates the water surface. Also in Genesis we find another description of the presence of a flying vehicle: “A scale was drawn on the ground, its top touching the heavens, and behold the angels of Elohim were ascending and descending on it.” (source)Genèse, XXVIII-12 Apparently this scale allows Elohim and angels access to their spaceship

In Exodus Elohim spoke to Moses: “The Angel of IHVH appeared to him in flames of fire from within a bush (…), the bush was burning with fire, but was not consumed!” (source)Exodus, III-2

We also found further: “But IHVH walked in front of them on the day in a pillar of cloud to guide them on the road, and in the pillar of fire by night to give them light so they could walk day and night. “ (source)Exodus, XIII-21  “The appearance of the glory of IHVH was like a consuming fire on top of the mountain”  (source)Exodus, XXIV-17 This “glory” could be a flying craft … In our episodes devoted to Moses we have seen the glory of Shekinah gushing like a blinding flash of the Ark of the Covenant: this refers to a technological phenomenon and it applies to this glory as well. 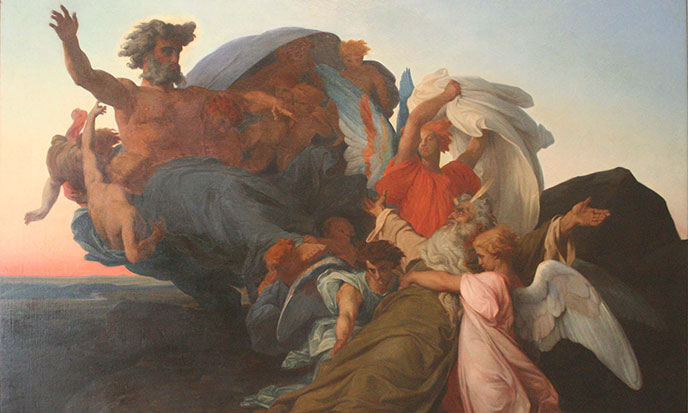 Moses was accustomed to phenomena with a strong alien perfume, as we saw on Sinai. In the second book of Kings, we find an eloquent description of an abduction: “When IHVH brought up Elijah into heaven in a whirlwind (…) here is a chariot of fire and horses of fire came between them deuxentre Elijah and Elisha, Elijah ascended to heaven in the whirlwind.” (source)II Kings II 1-11 The horses of fire, the whirlwind, it’s off to a flying into the fire nozzles.

Quite easy to decode: take a wild Amazonian who has never seen civilization, show him a helicopter, how do you think he’ll describe it? In similar terms, you can bet. Thus we wonder if all divine, angelic, miraculous, supernatural or mystical manifestations abounding in the Bible are not the misunderstood effects of technology?

If God is an alien, i wish he remains in Alienland.

Beware of everything, the matrix is everywhere, but not the Resistance.