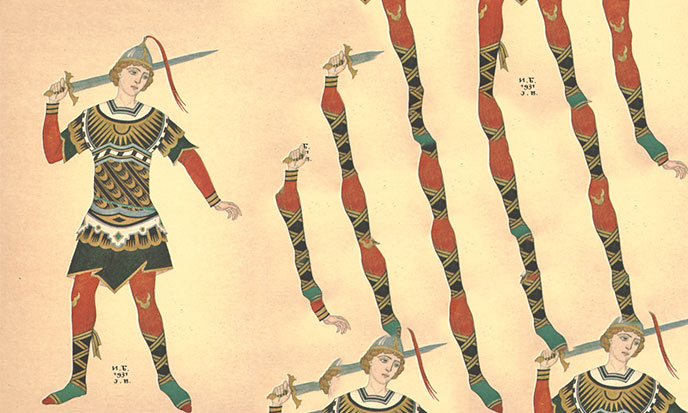 In pagan mythology of the Slavs, the chief god is called Perun or Перун. Reigning at the top of the divine pantheon, he is the master of lightning, which made him the Slavic equivalent of Germanic god Thor, among others, but not only.

Perun is the counterpart of the Greek god Zeus, the Roman god Jupiter, the Celtic god Belenos, the Mayan god Chac, the Aztec god Tlaloc, the Phoenician god Baal, the Hebrew god Yahweh, the Yoruba god Shango, the Indian god Indra, the Japanese god Raijin and all the gods in different mythological beliefs who are acknowledged masters of lightning. They are a whole lot. Which poses question.

Okay, no wonder that the gods are masters of the elements. As almighty human protectors they control disasters. But lightning is not the only calamity that can befall the poor world.

If this universal tradition was a nice invention, born of storyteller fantasy, the divine attributes would be different from one country to another. Here the Almighty would control floods, elsewhere volcanoes, or earthquakes, fires, droughts, deadly diseases, meteorite falls, locust invasions, and so on.

Nope, the god of gods control lightning, everywhere, in all the legends. As if that was based on real events. This is where the ancient astronauts hypothesis does irrupt. Some researchers believe that a long time ago -say a significant number of thousands or hundreds of thousands of years- the gods came down here on their roaming planet, which was a mother ship the size of the moon. Their leader was the almighty master of the lightning.

All regions of the world have been visited by the sky gods. Everyone enjoyed their power, their methods and weapons, as lightning and other rays. And each country has made its own religion, giving different names to these gods from space. It’s crazy, so deadly crazy that it’s likely to be true. 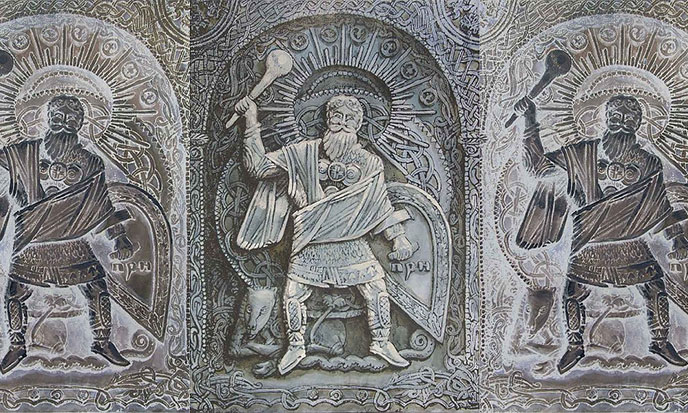 Superhuman giant, Perun was dark hair with a copper gold beard. He rides a fiery chariot pulled by a horse or a goat. The goat, like the ram is the fetish animal of former gods, the terraformers of our planet and the fathers of all species.

The horned gods such Belenos the Aries, Ram the Aries, Baal the Aries, Yahweh the Aries, Cernunnos the Stag, Dionysus the Goat, Perun the Goat, Marduk the Goat, then became the demons, when a new religion hijacked the old. Thus, Christianity demonized former administrator of the planet Saddam or Satan, who at once became evil and mischievous, accompanied by his totem animal, the Goat.

Perun get a powerful weapon ax, that always comes up in his hand, like the boomerang of the Australian Aborigines. It is, make no mistake, a technological weapon very similar to modern SciFi’s. Now Perun has a name that evokes something strong to my ears. Very very strong. Please listen.

A researcher who is dear to me, Milla Zahno, sent me a link to the god Perun emphasizing the similarity between Peru and Perun. As I pondered the familiar sounds of those two syllables Pe Run, I could not ignore the close resemblance to that distant country, Peru. Milla was right. And that very moment I attempted the  mind somersault, as Castaneda puts it. 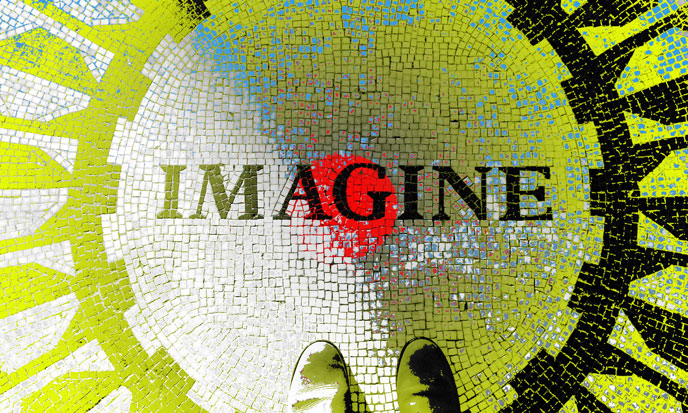 What is added to Peru to get the sound Perun? The final letter N. What famous Peruvian site begins with N? The Nazca site, of course, with its lines and magic animals drawn by kilometers along the sandy plateau, which seem to have been drawn there to be seen from the air. Nazca where the rocks are covered with many prehistoric petroglyphs and where the caves revealed pre-Incan mummies and artifacts in large numbers.

As you know, I am faithful to the old approach of Goslings, ie the children of Mother Goose, who used the secret language called the language of Goslings -today’s ignorance says language of the birds, which is a shameless mistake. I developed with another researcher as crazy as I, Alain Aillet, an exploratory method of languages being radically different to linguistics.

We consider oral language only. The various ways to write a language, highly variable, are preventing meaningful comparisons when studying the written texts only, as most linguists do. Concerned only with phonemes, we arrived at surprising results: some disturbing parallel is existing between all languages.

The existence of a first universal language is evidence to Alain and to me. Probably is it the language of the gods astronauts, since according to ancient traditions and the various mythologies they have taught us everything. This unique language had its end at the biblical event of the Tower of Babel, which was not a tower but a spaceport. 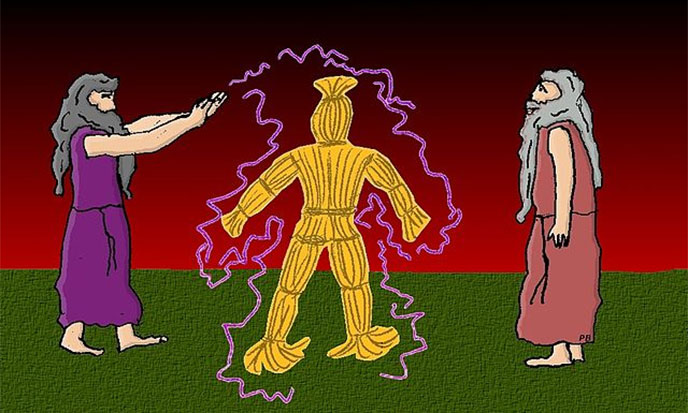 Now return to Peru and Nazca. Peru-Nazca. Considering the name Perun under the only phonetic aspect, pe roun, the sound ASCA or ASKA is missing. Now this word does exist in the Slavic language! Aska means thunder. Yes, thunder!!

In tales of babushkas, the god Perun is often called Perun Aska, Perun Thunder, as the thunder is his first feature and his favorite weapon. Superhuman giant, the Peruvian god Viracocha was dark hair with a copper gold beard. The god Perun in Russia has the same golden copper beard as Tiki-Viracocha in Peru. Too many coincidences to invoke chance, which, as everyone knows, does not exist.

Peru Nazca, Perun Aska, we are dealing with one and the same person, only one legend, common to both so distant countries, Russia and the Andes. No one can imagine any colonization of one by the other.

This requires that the ancient common and yet fully present root, comes from an earlier universal language, that of the former astronaut gods. The certainty that we had, Aillet Alain and I, here finds a stunning confirmation. The world and history are much more exciting than scolars say …

Hard to resist to the game. You too will try, if you’re not in yet. Searching words beyond the letters, looking for the words hidden in the sounds. Understanding the Language of Goslings.