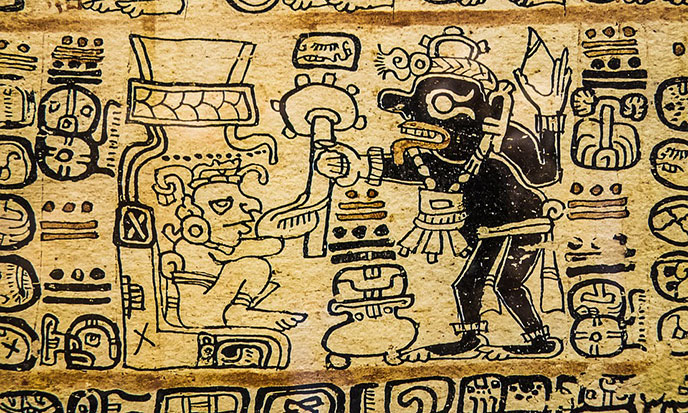 The Aztecs wrote their many myths in the codices, many of these codices are preserved despite centuries and spoil of the conquerors, as if among the Aztecs and their descendants was always found an insider to hide these precious documents, subtracting them to the ignorant lusts.

This sacred task now gives us many information about creator gods and the origin of the world, according to Aztec ancestors, the Toltecs and the Olmecs.

Thus, Quetzalcoatl often appear over the Codex, and in many different appearances. Do not confuse Quetzalcoatl, the creator of the first time, the envoy of the gods who live in heaven, do not confuse him with different newer historical figures who are adorned with this title. All Jesus are not the Christ. All Quetzalcoatl are not the first one. 10th century warlords in particular were called as their father god.

But the first, the only, the true, the wonderful Quetzalcoatl, ie our creator, is staged with “significant details in La Leyenda de los Soles part of the Chimalpopoca Codex.

The gods being concerted, they decide to send Quetzalcoatl down to Mictlan to recover the bones of previous humans creations. Quetzalcoatl appears before the Guardian of Hell called Mictlantecuhtli and asks for the “precious bones to make with them those who will dwell on the earth.”

The Guardian subjected Quetzalcoatl to a test: to get the precious bones, he will have to ring a concha without holes. Quetzalcoatl called insects to help: worms chew holes in the concha and bees are ringing it.

Thus Mictlantecuhtli let Quetzalcoatl take the bones and escape. But quickly the Guardian changed his mind, and ordered his troop to capture the fugitive. They had Quetzalcoatl fallen in a big hole, where the sacred bones break.

Quetzalcoatl picked the bones up and made them grind. On this powder, Quetzalcoatl poured the blood of his sex. The other gods were present as well and this “penance” gave way to “the servants of the gods”, that is to say, the present humanity.”  (source) 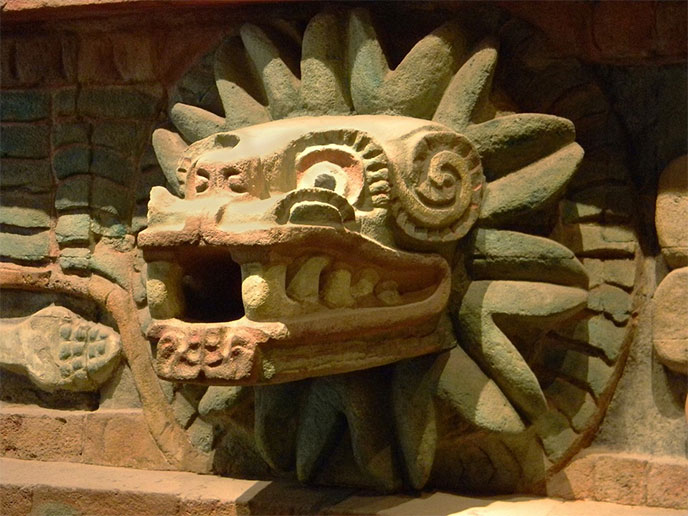 Mictlan, that was translated “Hell”, is a Nahuatl name meaning place of death and place of the dead, of micqui, death, and tlan, location. It is exactly the place of the Egyptians died, the Amenta, which corresponds to Atlantis.

For Atlantis was the mother ship floating in the Atlantic Ocean where were stored the genes of countless species of hominids identified by terraforming gods.

Knowing the Sumerian version of the creation of this humanity, we are confused by the concordances. Just replace Quetzalcoatl by Enki, and the deed is done.

If we also know the Greek version, Quetzalcoatl is replaced by Prometheus, and the case is classified.

If we know versions of the Bible, the Torah or the Koran, we are amazed to the bones. It’s all the same. Which, incidentally, is enough proof of a true story. If it was bullshit, everybody would not tell the same.

The terraforming visitors came from distant stars in their gigantic mother ship, a real wandering planet fitted with all conveniences and amenities for such an expedition. They were not in their first mission.

Their leader was called An / One / One / Anu / Uno / Ein / Oum / Om, which means the first. This explains why the letter A is the first letter of the alphabet. A  / Anu instructed his best geneticist – Prince Prometheus / Enki / Quetzalcoatl / Yahweh / Rama / Osiris – to conceive a new human prototype using a variety of hominids genes.

These are the “precious bones” Quetzalcoatl must come down and search in Middle-earth, the Mixtlan or Mixed Country – for the gods stand alongside men – ie on earth.

Quetzalcoatl, genetic engineer, will extract DNA from the bones of the former humans. For this, he must reduce them to powder. Then he mixed primitive humans DNA with his own, a divine DNA. Here we are.

We see how this curious myth, which initially does not mean much, proves to be the perfect description of our in vitro creation.

Make no mistake: the human being existed before the intervention. Those who made us were already men. Our species is innumerable, human beings have been occupying the Earth since its origin, andour species existed elsewhere long before, that’s my belief.

According to the same source,La Leyenda de los Soles part of the Chimalpopoca Codex Quetzalcoatl is also a protagonist of the myth which tells the acquisition of food for the men.

La Leyenda de los Soles reports that the gods wondered what the humans would eat. Quetzalcoatl, who had seen a red ant carrying corn, tried to find out where it came from.

The ant would not initially answer and then eventually take him inside the Mount Tonacatepetl. Quetzalcoatl, who had turned into a black ant, brought back corn. The gods, after having chewed, nourished early humans with it.

The gods then asked how to enter Mount Tonacatepetl. Quetzalcoatl did not manage to move it by pulling it with a rope. Oxomoco and Cipactonal predicted while Nanahuatzin succeed only split the mountain. Which he did. Then the gods Tlaloque stole all foods.

What that legend reveals? This central fact: the god Quetzalcoatl once brought corn in America. The thing is not surprising because terraforming gods brought with them all the cereals we eat today.

And they dispatched cereals to the continents. In America, they gave corn. In Asia, they gave rice. In Europe, wheat. In Africa, millet and cassava. In each region, a cereal – which is the basis of the local diet.

Now we know the date of the appearance of wheat and agriculture. First tracks, Egypt, circa 10,000 BCE. Then Mesopotamia, circa 8000 BCE. The grown corn in America appears circa 8000 BCE. We can therefore conclude that Quetzalcoatl lived on that date, during the 9th millennium BCE, making him the contemporary of Hercules / Herakles in Greek mythology.

Hercules too lived in a time when agriculture and animal husbandry are developed, since many of his works focuses on these areas.

The end of the legend joined the Egyptian and Sumerian myths. The Tlaloques – the gods that live on the mother ship Hyperborea / Nibiru – will steal the delicious corn to humans.

The former gods wanted so hard to eat vegetables they created us – small humans – to grow. For their first assistants, Angels / Giants were quite unable to cultivate the land and raise livestock.

We owe our existence to the greed of the gods. And to their lust, as regards our women and our children …