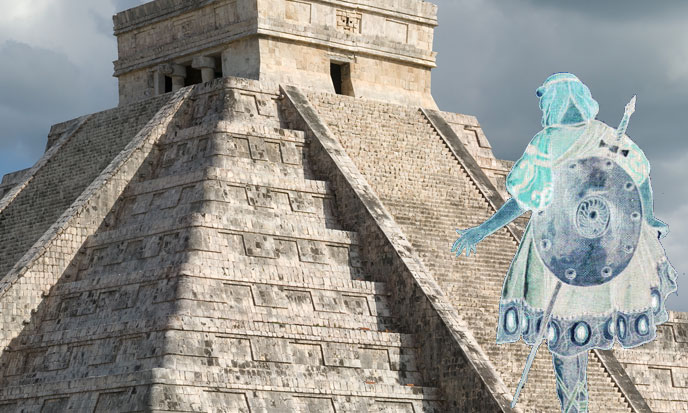 While the elder, Ram the Aries of Hyperborea conquered and civilized the world eastward, Enki and Cuchulainn went eastward. In the Andes, Enki was called Tiki, first god of the Pre-Incas. Tiki laid the foundations for a sustainable civilization, temporarily cured of any passion for human sacrifice, that Tiki violently fought. Cuchulain, the third son, decided to change his life. Breaking with his warlike manners and the bad memories of his red veil over the eyes announcing the rise in him of a terrible desire for murder, he became a kind of monk soldier, with a small band of followers, headed for the land of America, that he landed in Yucatan.

There, under the name of Kukulkan, he pacified the Indians, taught them and healed them. The demi-god has sown his wild oats. His frenzy of murder, the red veil that formerly drove him to kill, turned into a quiet strength that refused any violence and bloodshed.

He forbidded human sacrifices and spread in the land a message of brotherly love. His turbulent and dissolute youth has turned into a path of awakening made of sweetness, altruism and austerity.

He protected the weak and healed the sick.

At the end, when Tezcatlipoca – the Smoking Mirror – provoke him in a duel, Kukulcan Quetzalcoatl will have no alternative but to run, not to break his vow of nonviolence. This picture is confirmed by that made by the local traditions. In the Popol Vuh of the Quiche, for example, we are presented the men of Kukulkan as monks scholars: “They were lords of genius. Dead, famine, strife, all was known by them in advance” They were men of knowledge.

But also men of power: “They were great within themselves” Great sages, but not gods: “They fasted for long periods and did penance before their gods.” (source)Popol Vüh

The gods would have a God, too? It reminds me of Mickey Mouse who has a dog smaller than him. It goes where, then? When I think of all the doctors of the church, all these learned rabbis, all these ulema steeped in holy texts… All these scholars fanatics of God have racking their brains for centuries to justify the unjustifiable… God is unique, they are certain, and yet their sacred texts present him in plural. Total mystery.

It has stimulated them. They invented all kinds of stuff. The Kabala, the Sufi mysticism, the Christian doctrine, much ado about nothing. The Source does not care about these twitterings. Vertigo of the mise en abyme. Where is the One God? These gods who pray to their gods, a double bottom opens, we plunge headlong into the former world where opens the previous world that leads to a former world that reveals an even older world.

The time is not linear as we think, nor cyclical as the ancients thought. Time is trundle. Civilizations grow into each other, as matriochkas. Myths are like trees: they grow from the inside. And mammals, too. The man grows from the center. The fetus that grows in the womb makes us nesting animals: each year sees us a little taller, a subtle new skin replaces the old one.

We are trundle beings in a trundle universe. Each of us is the tridimensional terminal of a multidimensional being involved in an infinity of parallel universes. And as the ancient Maya believed there is any likelihood that the universe is not infinite, but holographic. They say time is not linear but cyclical. What happens here happens in an infinite number of places. What happens now already happened many times and will happen again and again.