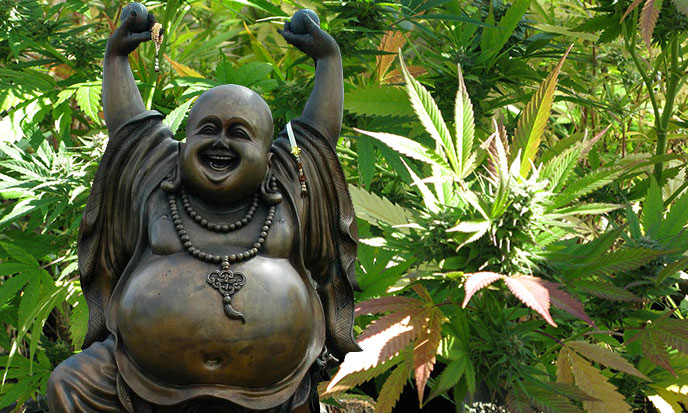 In 2008, an archaeological discovery scared the wet blankets. Right in the desert of Gobi, to the Yanghai Tombs near Turpan, China, was found marijuana in a 2700 year old tomb.

Dr Ethan Russo analyzed the cannabis. After a battery of tests, Journal of Experimental Botany confirmed that these flowers of hemp had psychoactive properties, the laboratory tests have shown that the ancient ganja “is very similar to that cultivated today.”

“We know from genetic and chemical analyzes that it could produce Tetra Hydro Cannabinol or THC, the main alkaloid of cannabis,” said Russo. With a stony-high trip, it would be similar to the famous White Widow; pitily nobody could not verify this, the plant being too old to be consumed. A dirty disaster might think some of you, knowing there were about 800 grams totally spoilt. It shows that our ancestors were still going strong, even dead.

We previously thought that the ancients cultivated only textile hemp …  bad mistake!! Researchers believed firmly until now that hemp was only used to make bags or ropes in the old days, they were firmly wrong. Our not so stupid ancestors also used hemp to get high. No surprise, as we all know, hemp is a good way to enlightenment – which was the main concern in ancient times. Now the legal drugs – as wine, alcohol, tobacco – offer no way to enlightenment. Kali yuga, ye know, sad sad Age of Iron …

The weed was stored in a wooden bowl, at the bottom of a leather bag, near the head of a blue-eyed Caucasian, about 45 years old. “This individual was buried with an unusual number of rare valuable items,” says Russo, who mentions a makeup bag, pots, pins, a quiver of arrows, and a musical instrument of jalopy type. Researchers believe he was a shaman of the Gushi people, who spoke a vanished language called Tokarian, close to Celtic language. (source)Jennifer Viegas, Discovery News, 3rd december 2008

Cannabis is cultivated in China since Neolithic times : for instance, hemp cords were used to create the particular designs of Yangshao pottery. The first Chinese Classics often refer to the use of the plant for clothing, food and fiber, but not for its psychoactive properties. Probably because the Chinese associate cannabis with indigenous shamanic practices of Central Asia which are surrounded by contempt. (source)Wikipedia

The botanist Li Hui -Lin noted that “the narcotic effect of the hemp plant has been known very early in time” He noticed the ideogram MA meaning “cannabis, hemp” has a connotation of “numb, tingling, foolish” for example, mamu 麻木 “stunned” and Mazui 麻醉 “anesthesia, amazing”. These double meanings are apparently derived from the properties of canabis’ fruits and leaves,he would say flowers which were used as infusions for medicinal purposes.”

Li believed that shamans of Northeast Asia transmitted the medical and spiritual uses of cannabis in China. In ancient Chinese wu 巫 means “shaman, medium, doctor”. The use of cannabis as a hallucinogenic drug by necromancers or magicians is notorious. A in most ancient cultures, Chinese medicine has its origin in magic. Doctors were practicing magicians. In Northeast Asia, shamanism was widespread from the Neolithic until recently. In ancient China shamans were called Wu. This vocation was very common during the Han Dynasty.

After that, they gradually lost their importance, but the practice persists in some scattered localities and among certain peoples. Today, Rastas shamans and inspired artists fighting for the free use of creative and recreational hemp.

Former U.S. presidents have formed a lobby for the decriminalization of hemp. Their argument is that war against mafias and cartels failed. President Obama said that hemp is less dangerous for young than alcohol. In France, we’re not out the wood yet: the wine lobby blocks it all.  Cannabis makes yelping opponents of gay marriage and alcohol fans. How nice people they are, a bunch of desperate racists, backward-lookers, and gay killers. If this gang refuses hemp, it cannot be so bad …

Will French President eventually hear the message? Will he succeed one day to choose sides? Will he finally stop his cowardly and indecisive behavior? Who knows? In the meantime, I’d like to remember that the acquisition, possession and use of cannabis are strictly prohibited in France and severely punished by the French low. Sorry, law.