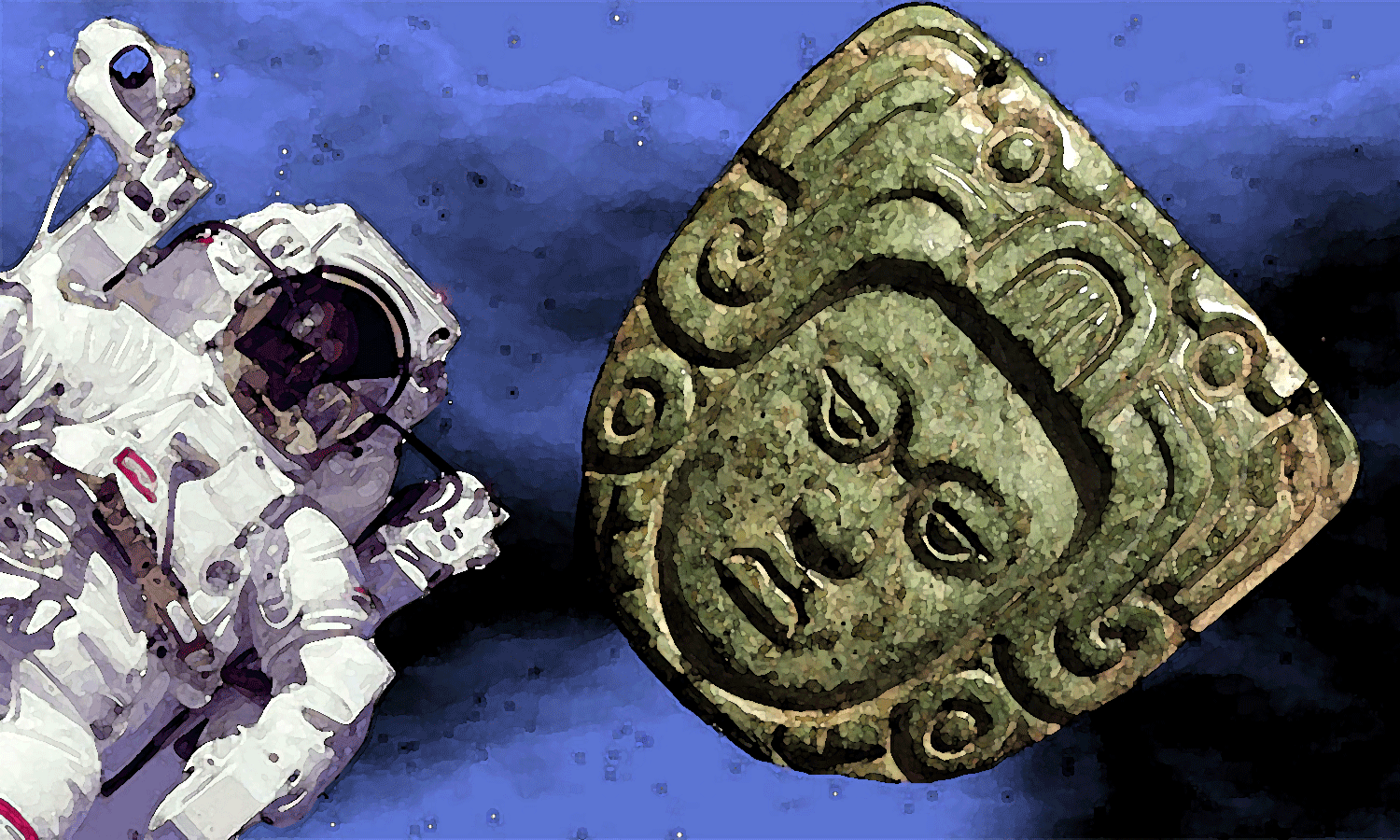 We come from far far away. But we did not come out of the jungle. We were brought up, washed, dressed, capped from our origin by benevolent beings, superiorly developed, who mastered the most advanced technology, one we do not have yet … But it’s coming!

Where did we come from? Caves or heaven? Did we descend from apes or from giants? Why would UFOs come from elsewhere? Would the Atlantean civilization have finally passed some secrets on us? Are we on the verge of finding the technology of the Former Gods? Quite agreeing with each other, hundreds of ancient traditions taught we have been created. If our species is as old as we think today, the creation of Man occured such a long time ago that we may doubt the memory of it could have been transmitted. 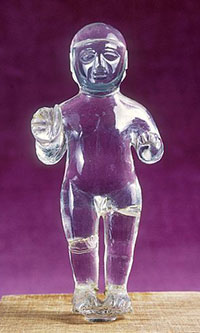 So all these ancient traditions must evoke a more recent event. In this case, Adam was not the first human, but ony the first of our kind. His creation was just a recreation. The right word is procreation. Scientific procreation, yes, we are GMO, genetically modified organisms. The mythological stories leave no doubt on this subject: the modern man has been shaped by an advanced civilization. The Genesis, the Book of Enoch and the epic of Gilgamesh say that our creators were ‘like us’ and that they came from heaven. “Swing low, sweet chariot coming for to carry me home” says the Negro Spiritual from the Bible.

For those who have eyes to see, evidence of the existence of this civilization is everywhere. Witness this crystal figurine, belonging to the Hittite culture, and dated 3200-3700 BP. It recognizes an astronaut, almost identical to the Olmec and Mayan astronauts. But this picture is from Wikipedia England that the legend as follows: figurine of a child. The reader will judge.

As Pichard and Lob told us,Ulysses, by Lob and Pichard, Dargaud 1974 – see on top of page the Olympian Gods fly all sorts of planes, rockets, or UFOs. They carry laser weapons, balls of fire, death rays.

They even used the nuke bomb. The U.S. sighted person and prophet Edgar Cayce told us the same thing, not about the Olympians, but about Atlantis. Evidence that they are the same. For if the first generation of gods, the Titans were peaceful and civilized, the second generation, the Olympians, was much less peaceful. The golden age has given way to the Silver Age, twice as long, half as pure, half as bright.

OK: our creators had flying machines. So what? The book of Enoch called them Watchers or Guardians because they were endlessly observing the stars in their crystal tubes, to derive predictions. In the Mahabharata, we learn that the Rama people owned aircrafts and spacecrafts. At that time, apparently, men knew how to fly in the sky and space. Duly noted.

Our makers were hyper-talented superhumans – overdeveloped in such a degree that the wild Adams couldn’t believe. Those extra-special people seemed like giants for the dwarfs the Adams were. Such a gap between populations is not a big surprise anyway. Still nowadays, huge cultural differences exist between the different human populations. And before that TV got all over the world, a Papuan could have taken an astronaut for a god. In the distant past of our species, some strains could have been able to achieve a high degree of development.

Enough technology to go to the stars, and come back? Why not? Enough to make genetics manipulations and why not, to make a real race of giants ? Yes the fossils exist. They are even so numerous that scientists have more and more trouble to make them out to be singularities. With the extraordinary prospects of mankind dating from dinosaurs, hundreds thousands of civilizations had enough time to develop, and to destroy themselves too. The problem is the absence of technological traces. Just a very few remains, not enough to explain what really happenned.

Still, open your eyes, some very ancient architectures evoke perfectly the futuristic galactic civilizations. Above this monument of unknown origin is in Japan, on the island of Yonaguni near which divers discovered an underwater structure that evokes the civilization of the megaliths and Mu. Why can’t we trace the footprints of the gods  down here? Why does their track suddenly evaporates? Maybe they are just left of the space from which they came. Those we call they were the ancient gods of the civilizing astronauts? Was paradise on board their gigantic mother ship? 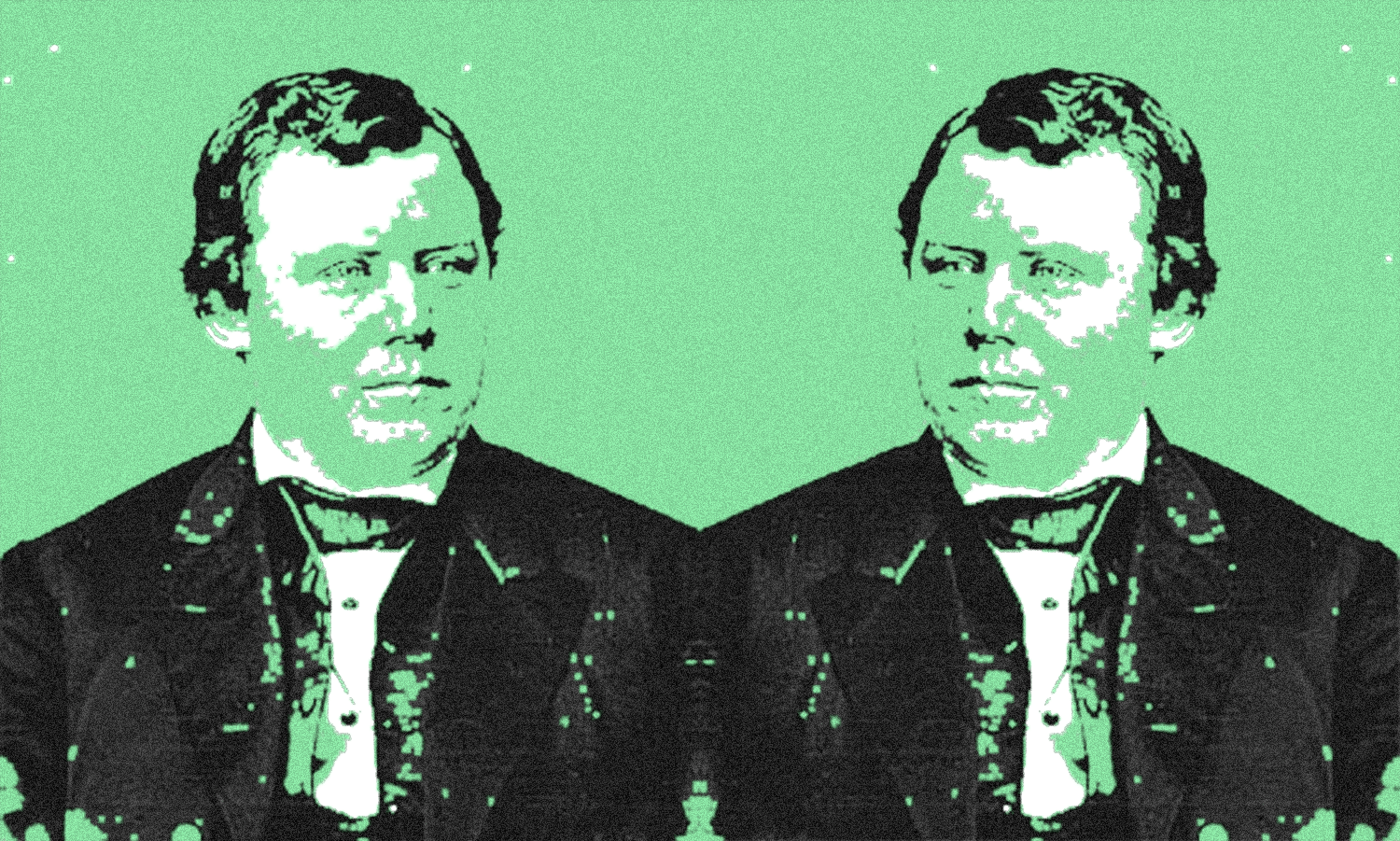 Many researchers have spent a long time to enumerate the lost Atlantean sciences. Ignatius Donnelly thought their civilization has been lasting more than 150,000 years: thirty times longer than ours! Enough time to gather a prodigious knowledge. Considering the degree of scientific and technological development that we have reached in only three thousand years, we can easily imagine the amount of knowledge accumulated by a one hundred or two hundred thousand years civilization.

I indulge in thinking that the Terraformers first came to our blue planet three billion years ago. And the Terraformers who created us belonged to the same species. A civilization that has several billion years of existence, and is capable of pursuing terraforming enterprises for the same duration, deserves more than admiration: it exceeds us infinitely. Enough to master sciences that we still ignore as gravitology, fulgurology, ultra-luminic speed, teleportation, and the infra-acoustic field with the fabulous use of infrasonic scales.

Bad faith throws away the scientific evidence that does not fit the allowed scheme of the evolution of our species. Bad faith destroys scientific treasures and lost knowledge. Thus, the Atlanteans used certain properties of metals that our civilization has disregarded.

Thus, the Atlanteans used some properties of metals that our civilization disregards. To propel their ships, they had sonic engines driven by polymetallic repulsion. How does this kind of engine work? It works on the principle of natural attractions and repulsions of certain metals. For those who doubt the high technology of Atlantis and the Former Gods, please consider the following object. 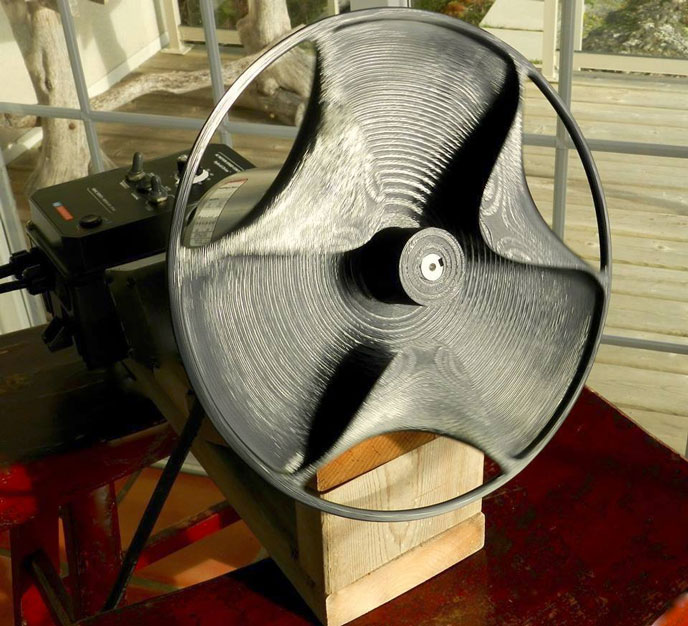 The disc of Sabu was discovered during archaeological excavations conducted in 1936 by the Egyptologist Walter Bryan Emery, a specialist in mastabas of Saqqara, Egypt. This mysterious utensil was in the grave 3111, in the heart of the Mastaba of Sabu dating back 6700-7000 BP. Sabu was the scribe of Horus Adjib, pharaoh of the First Dynasty. 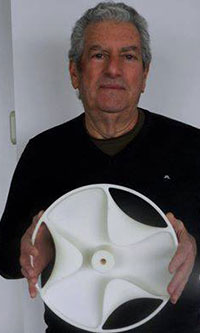 As seen in the pictures, the circular artifact is pierced by a shaft to which converge three profiles lobes. The object has a diameter of 61 cm. Its height is 10 cm. It was restored to be exposed under its present appearance in the Cairo Museum.

The official version of Egyptologists is this: it is quite simply a censer. C’mon! Futuristic silhouette and a little technological design for its time make a cult out of the ordinary. But that does not appeal Egyptologists. I saw immediately a propeller drive out of an industrial workshop. This is in my opinion a small clay model for a large carrier ship propeller, which would then be produced by casting.

A researcher, Daniel Statnekov, is presenting his model of Sabu disk he did at 1/2 scale to make expiriment with, trying to find out the use and function of this strange piece of technology.

In any case, this piece is an anachronistic daring … It reinforces the vision of a very ancient past bathed in high technology. Where are the remains of the Atlantean ships? ask the skeptics. What about the computer of Antikythera? say others. What about the Hittite and Olmec astonaut figurines? And what about this propeller drive?

According to the archaeologists who certainly do not miss any joke, the Wheel, which concept is less sophisticated than this disc, will not emerge before 15 centuries. Square headed teachers have to stop bullshit now. Why did not a developed civilization leave more traces ? Because it left to where it came from. To the stars. 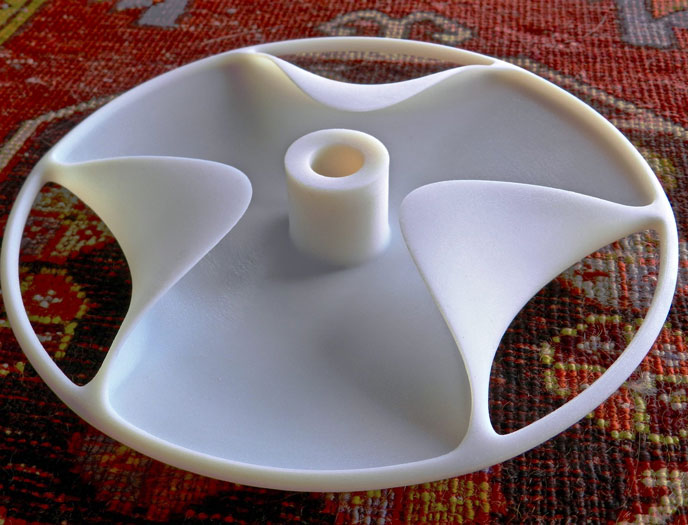