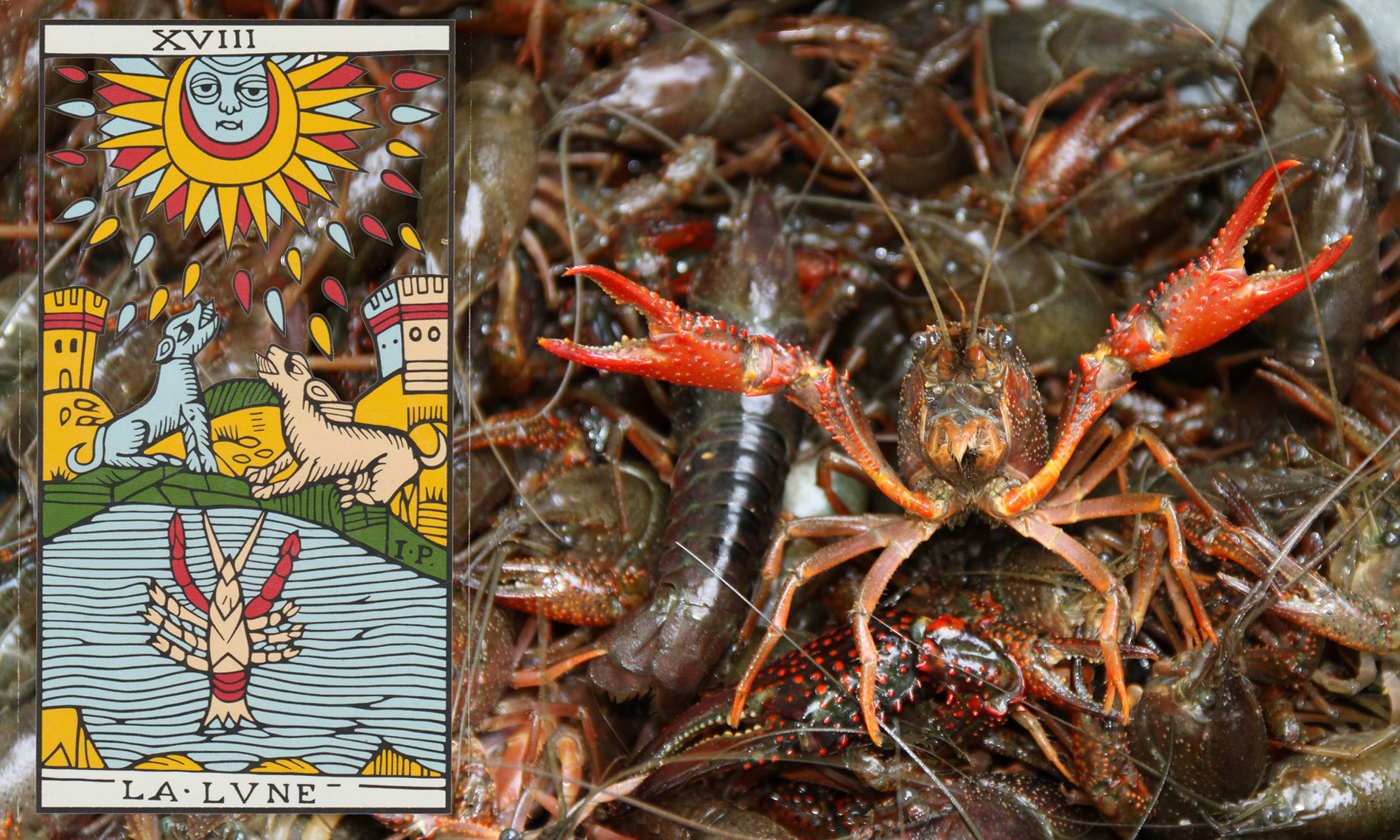 As I pursue my Star – I’m still pursuing it – the dark scenery of the Moon is set in place. Two naked dogs around a pond of water howl at the moon who does not care. At the bottom of the wave a danger rises. The crayfish is waiting for its time. Fragile and pugnacious, she is waiting for her carapace.

The Moon bears the bark that only challenge the patience of the crayfish. Samurai of the rivers, this little crustacean does not stop to fight. However, at the full moon, the crayfish moults. While waiting for it carapace harden, it sinks to the bottom of a hole, the forceps forward to repel the incessant aggression of its fellow warriors like it is. 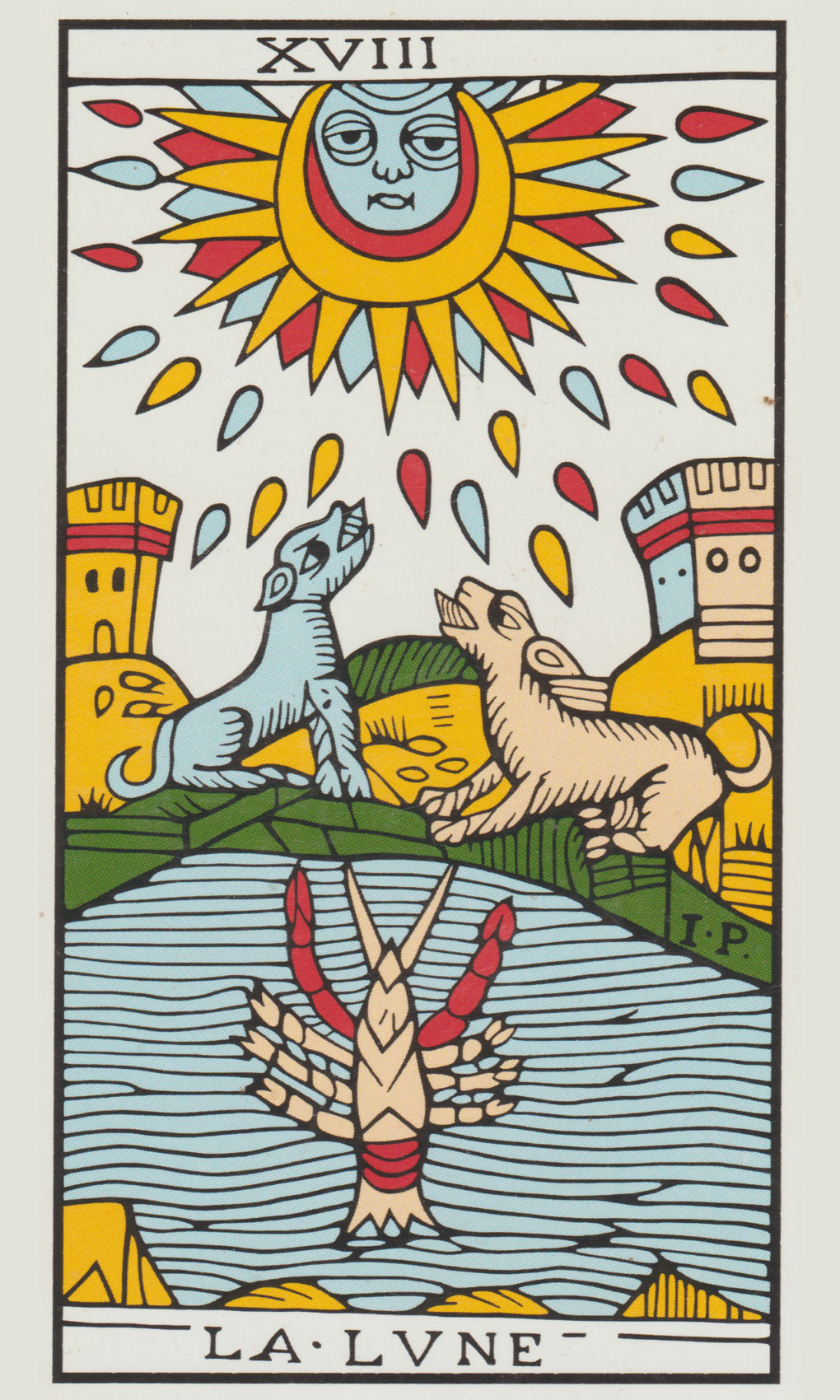 Such is the image of the Moon, samurai of the night sky. Slow to rise, slow to ripen, full moon of the witches’ Sabbath, full moon of the werewolf, hexes and spells. Ascending or descending, it holds out its horns for the fight. Darkened nights without it, her comes changing moon. It sings, it’s enchanting, you’re dying.

You disenchant yourself. For a long time you have roamed the plain, in the depths of the valleys, in the forests of the night. You looked at it as it darts on you its big round eyes. Unfit to penetrate its mysteries, you have loved, hated, despised, adulated it. At length you have learned its phases, until having them in your body — engraved, unalterable and yet mobile in the midst of the movements. Mobilis in mobile, the Moon is like you, my friend, my comrade.

You my other self, you who roam around these pages under the sweet name of Kervor, the house of the sea. You who recognized the Moon for what it is, cruel, indifferent, spying, mistress, friend. Your enemy too, that moon that makes you Pierrot. This dead star that lends you its pen to write a word. Your ills. This living dead Star that taunts and tears you away.

You are the prowler, the wanderer, you running fast among the hobbits and elves just before the return of the king. Moon modest, you hide your buttocks to humans, always turning to us your face pale, hiding your ass naked – not out of decorum.

What is she doing behind her back? Will we ever know? I do not care, I hate her hiding under the hedge. I wait for him at the zenith shining in the night. I fear it in the morning flowing and drowning. Moon my twin ignored, in the belly of Mom your shine rocked me, and then I ate it, the Moon was not born.

Oh, the strange mise en abyme! Oh, the queer madness of rhyme! The moon in the moon is mirrored, the moon I admire, no buttocks and yet, in the words of children, the moon of nursery rhymes is the other name of the booty. 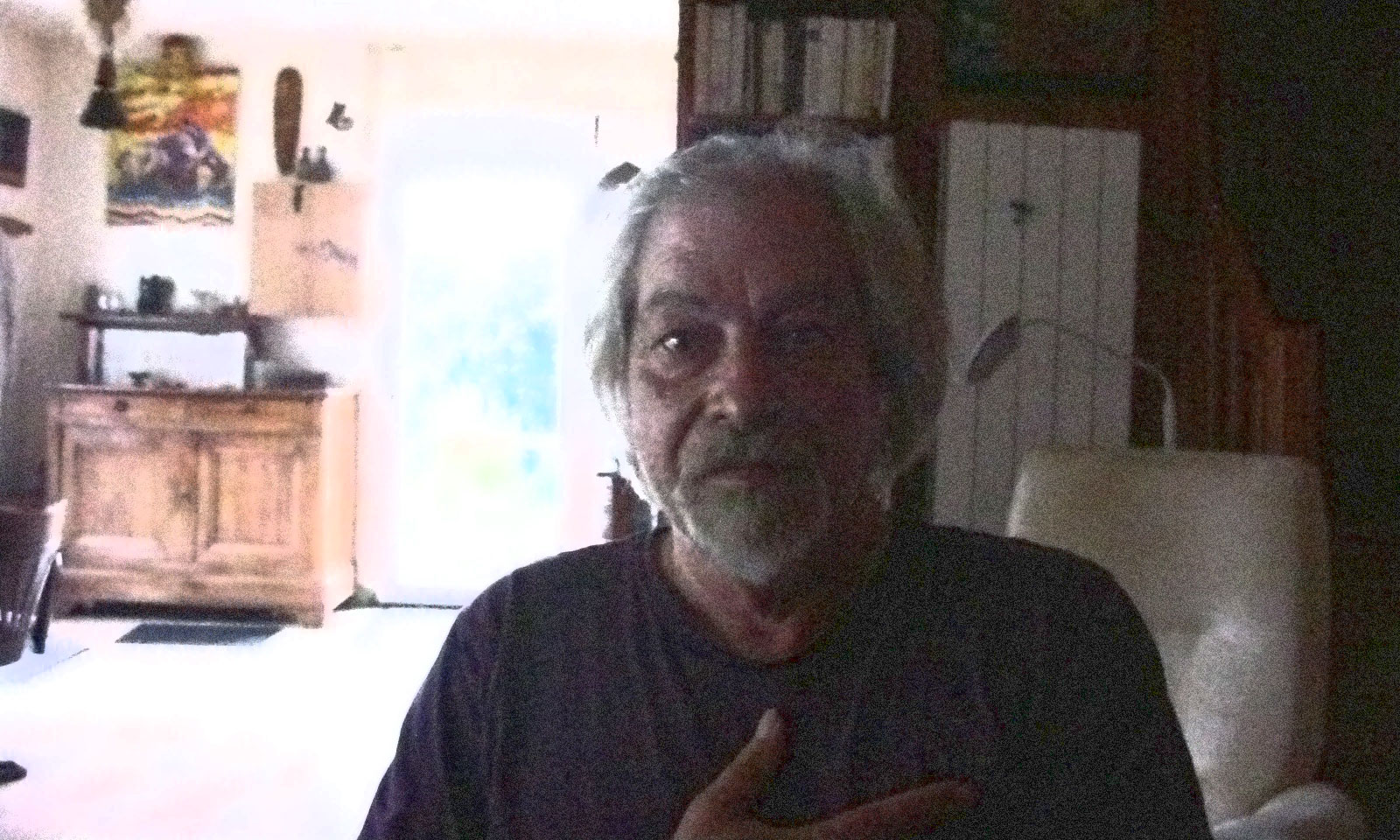 I pulled the moon as one gets a prison sentence. I vibrated on her like a dog screaming at the moon. Or two dogs, said the arcane. I fought, debated, fought on the beaten tracks to the refrained refrains in my heart felled and my body curled. Moon, are you fighting? One said the other answered me. One says pretty fresh words laid Monday.

Hardly recovered from the excitement of my awakening, celestial reunion, since I was told awake by birth, I began to write, feverish, indefatigable. And I have not stopped since. Scriptomaniac in heat. On my previous lives, or inner experiences. On my benefactor, initiation, enlightenment. And on the history of the world. I’m flooding, I’m blowing.

So many year-old years where I pulled necklace of pierced boat, salesman of wind of the cities, vilipendent, archangel, master of my emotions, slave of my pains and my debtors. So many carabosses years when I drove carosse! Pierrot swaps the pen for a keyboard that rhymes with master on board.

As the first volutes of the future saga take place aside, already the Moon is occulting the Star which follows its choppy path in the hard bumps of pebbles. Who will tell the languor of the dark black moon? When on the round pond a crayfish weaves and knits another carapace the artist’s way. Who will say the dead time that passes slowly? Who will say crass patience? Scarlet anger? Silence?

I burst to muzzle my rage. I exasperate myself, odious I am. I rush. I drink the streets, the odious places. I run the city with my Columbine, lunar and crazy Pierrot, I look like Godard’s film, ie Godard before it’s too late. It’s always too late when we watch over the moon. We have no more courage, we are enraged at the heart of the night.

My wife fired me on the corner of a chilly evening. King of beggars, I sleep under bridges. Columbine arrives, panicked. I make love to her slowly, gritting my teeth. The moon in glory splashes just like me. I’m drunk, I’m a widower. Shiny as a penny. My Moon has been beating me up. I was crumbling, naked, along the street, under the bridges. But the echo answers me. Echo and vision.

Pierrot is not nice. Pierrot growls. He is cold. In his heart he is Kashtabalda. He is incrusted, he combines. He insults the skies, the passers-by, Colombine. He shouts his hatred to the wind, to his customers before. Fish, snails and blackbird. He no longer has a reader, he is no longer an author. No longer has he a trade, a roof, no more than you, my pretty Columbine, who is not feeling fine. Pierrot is not nice. His lover is patient. Fortunately, happy joker.

Colombine and Pierrot disguised as hobos. From door to door, from fake to real friends, they are looking for a song, for a home, a shelter for the storm. They are relegated, like a bad football team. They do not play, only win blows, slaps, rebuffs, they do not harvest much, they do not sing notes, they do not eat but they fuck a lot. With rhyme and reason. In the coldest season …

They do not play football but live on a daily basis the horrible sensation of seeing their head in a gutter, roll rolling on the field under the edge of the cleaver. Close the perky ones. Mistletoe the new year’s guillotine. No more Pierrot, nor Colombine. When curtain was lowered it was sad to see the public run away without applause. 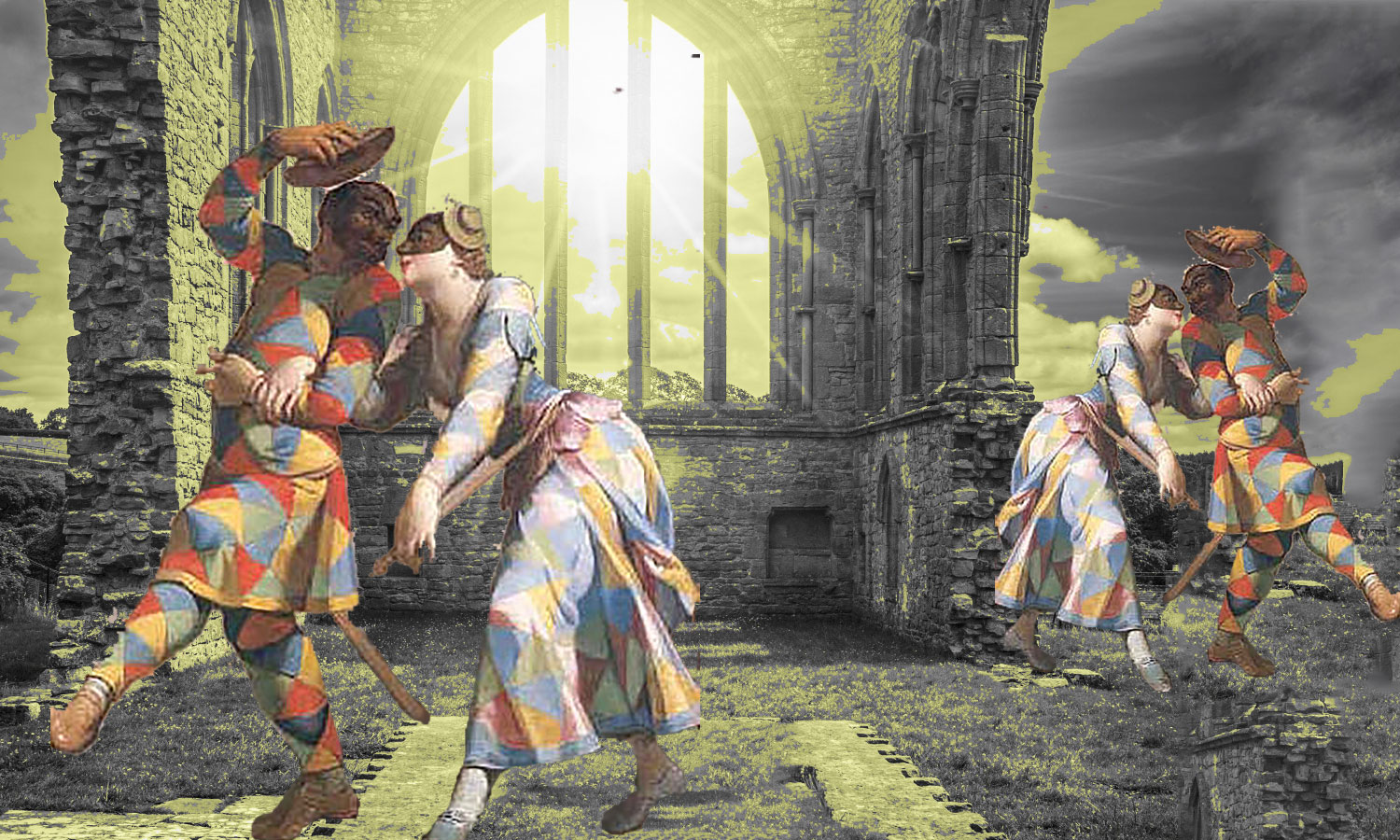 Your encouragements are the daily bread of those who make honorable career of stage. Here, there is no free meal to snack on. The easy life belongs to yesterday. Hard working every night, we wet the underwear. We dip the vest, we fear the rosaries of insults. Humiliating, miserable quibbles turn to a dirty shame to belittle those who use them.

The Star has shone on the Moon, the coming Sun won’t hide the shining Star, the Judgment still honors it, the World will appreciate its gold.