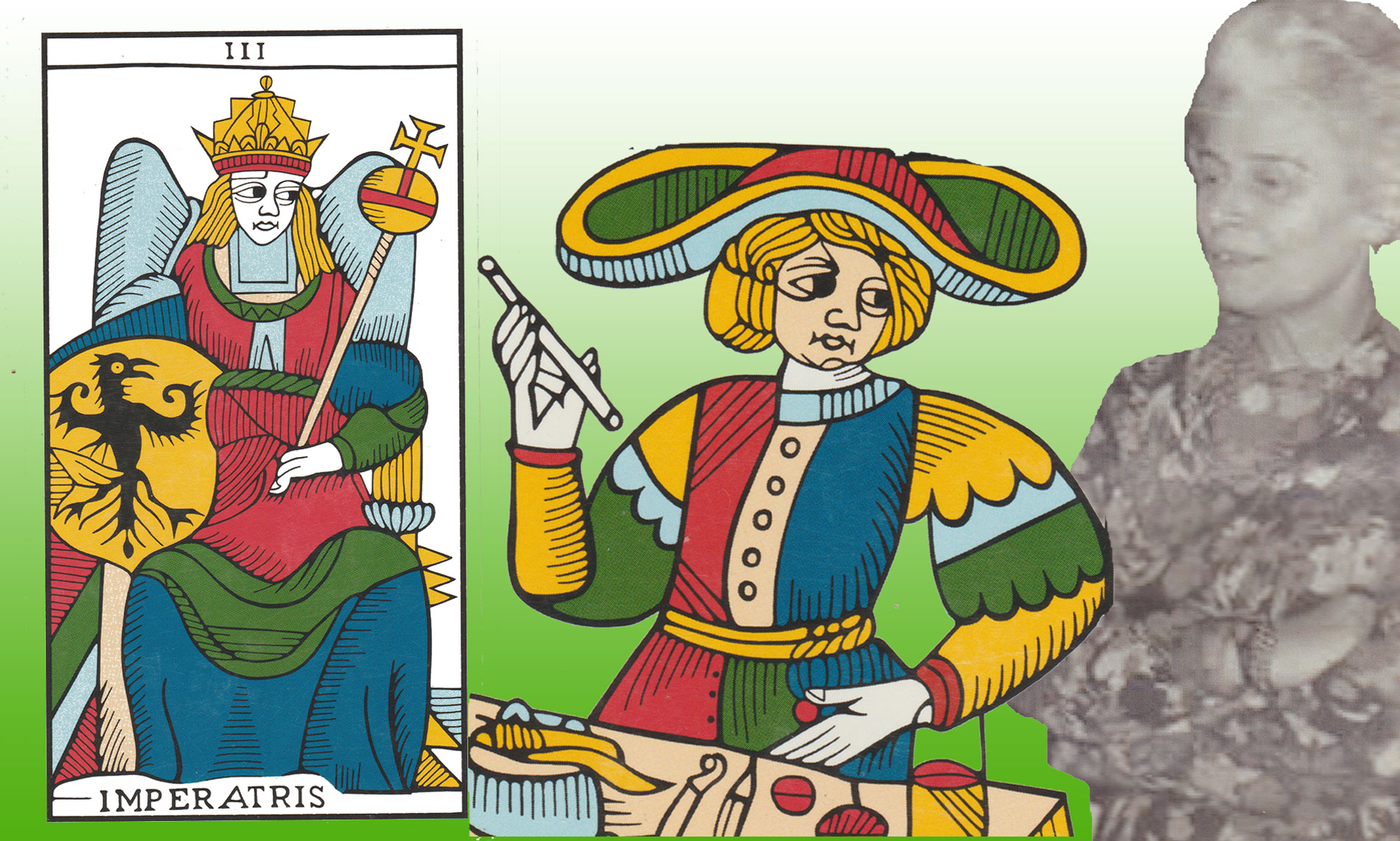 Our BateleurMagician – your servant in this case – therefore continues his initiation. After being entrusted to the care of his good grandmother, here he is out of danger, deemed viable, and therefore worthy of being given to his mother. A new episode begins for him – for me. What the Empress is going to teach me is a precious viaticum for this material world.

Why viable? Let us not forget that the tarot dates from the 17th century: since the Middle Ages, the infant was not entrusted to his mother before he was out of danger. The post-natal mortality was indeed very high, as Alexandre Astier clearly shows us in Book V of his prodigious series Kaamelott. So, here I am finally in the arms of Mom. According to the original description made by Jean-Claude Flornoy, the training that the Bateleur receives from the Empress is that of money. How to use it, how to manage it, how to save it especially.

I was born in 1949, the turmoil of the nearby war was still felt. Ration tickets were still in effect for many commodities. Struck hard by the absence of men for many years, agriculture lacked arms and children lacked bread. Money too was rare. What Mom showed me first, then and finally, how to avoid spending. How to recycle, reuse, retype, refurbish, mend, transform, tinker, requin, repair. How to do something new with the old to not go to the street naked ass. I do was a spoilt child. Third after twins, clothes too small for them were my big ordinary. I will always remember my first new pants. I was twelve years old. Solemn Communion.

In families, if it was then the father who brought the money back, the role of the mother was to distribute it at best. Basically, at home, it was all for the food, and for the rest we improvise. Clothes, Mom knew how to do everything. Knit, sew, cut, trim. Dad did a lot of work too. The children never lacked anything, even though they were often dressed like the ace of spades. Who cared about this France in black and white? When I saw my first color film by Technicolor®, I realized that gray childhood was over. Before, everything was color wall, and the walls of Paris were black with dirt. And then Jean-Paul Belmondo dethroned Louis Jouvet.

In the neighborhood cinema, we could spend a few afternoons watching two big films, mostly American, with a documentary on the manufacture of fixed-socks, advertisements presented by Jean Mineur’s helmet miner, news and a cartoon in color. Sometimes at intermission there was some music hall. Convertizers, ventriloquists – I loved Jacques Courtois and Omer! – extralucid clairvoyants, and for the most cunning young spectators, we got it all free … due to the emergency exit! That way we kept our coins to signal to the usher: “Eskimos, Iced Chocolates!“ 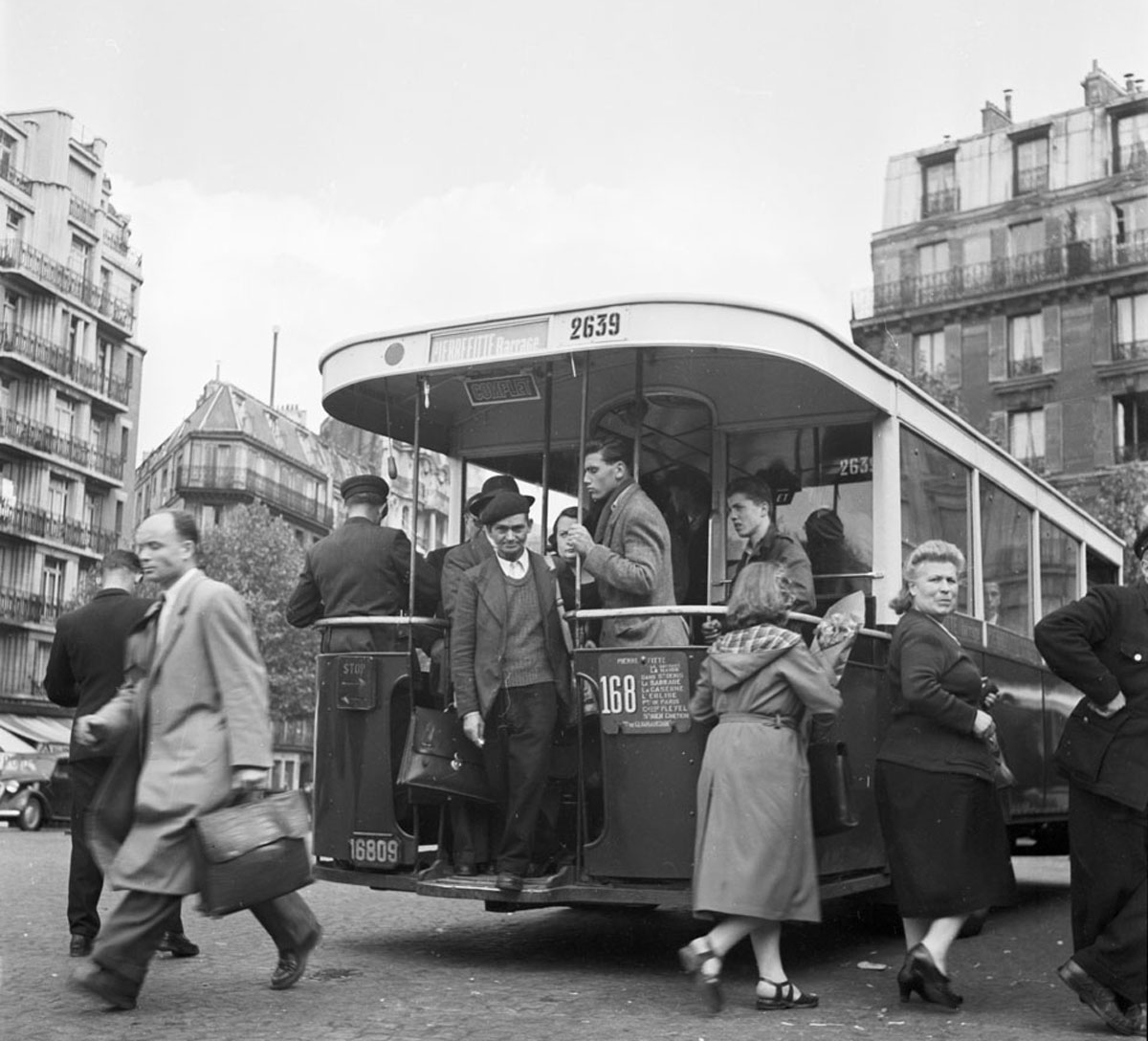 Stretched forward on the bow of the boat, my mother was watching. In the boat, my elder brother and sister. Loustic and Mastic. My little sister Picnic was not here yet. She was to come a year later. I was three years old. We had rented a cottage in Grand-Bornand. With old planks full of splinters, Loustic and Mastic had made a hut by pressing them on a wall of the cottage. I spent my days there. I see again the clear sun on the mountain, I hear the sound of the water of a ru which flowed without end in the watering-place. There must have been cows, brown dress, long horns. Surely. Savoy produces the best cheese in the world. The Reblochon. At Grand Bornand the best Reblochon of Savoy was produced. So the world. The Reblochon of Bastard-Rosset. So there must have been cows all around the cottage. Heaps of cows. But I do not remember, cows.

On the other hand I remember reblochon perfectly. This is my first taste experience of quality. In those dark days, we were satisfied with what was on the plate. And we ate to live. There, for the very first time, I savored. Unforgettable. It remained my favorite cheese. I also remember the great tunes that the twins gave themselves. They have always had great airs. They still give it. Good luck. And I remember Mom. She was alive, she ran everywhere. I never saw it like that after that. The air of Savoy was good for him. Too bad she never returned.

From my father, I have no memory in this cottage. Yet he was there, that’s for sure. But he was with us without being there. Part of him had stayed in the Rhur camps in Essen. Mom told me much later that five years after her release, Dad was a zombie. Mom made all the decisions for him. He answered, “Yes darling.” Distant. Lost. Too many dead friends at the front, too many shots, too many tortures. Dazed. He was here but still there. Mom was carrying the family on her back. She has retained an inner strength and a gift for the organization that has been admired by all who knew her.

My darling dowser, my fire-eater had her head firmly planted on her shoulders. She knew how to recognize underground springs and streams. I saw her doing in the garden. With a dowser stick. It is a fork of green wood that is taken in a hazelnut tree. I planted two hazelnut trees in the garden when I came back here to finish my life. Mom loved me, she paved the way for many other outstanding women who loved me in turn. But no anticipating. The three-year-old kid does not care about his future romances. Here and now. Le Grand Bornand. Bastard Rosset. 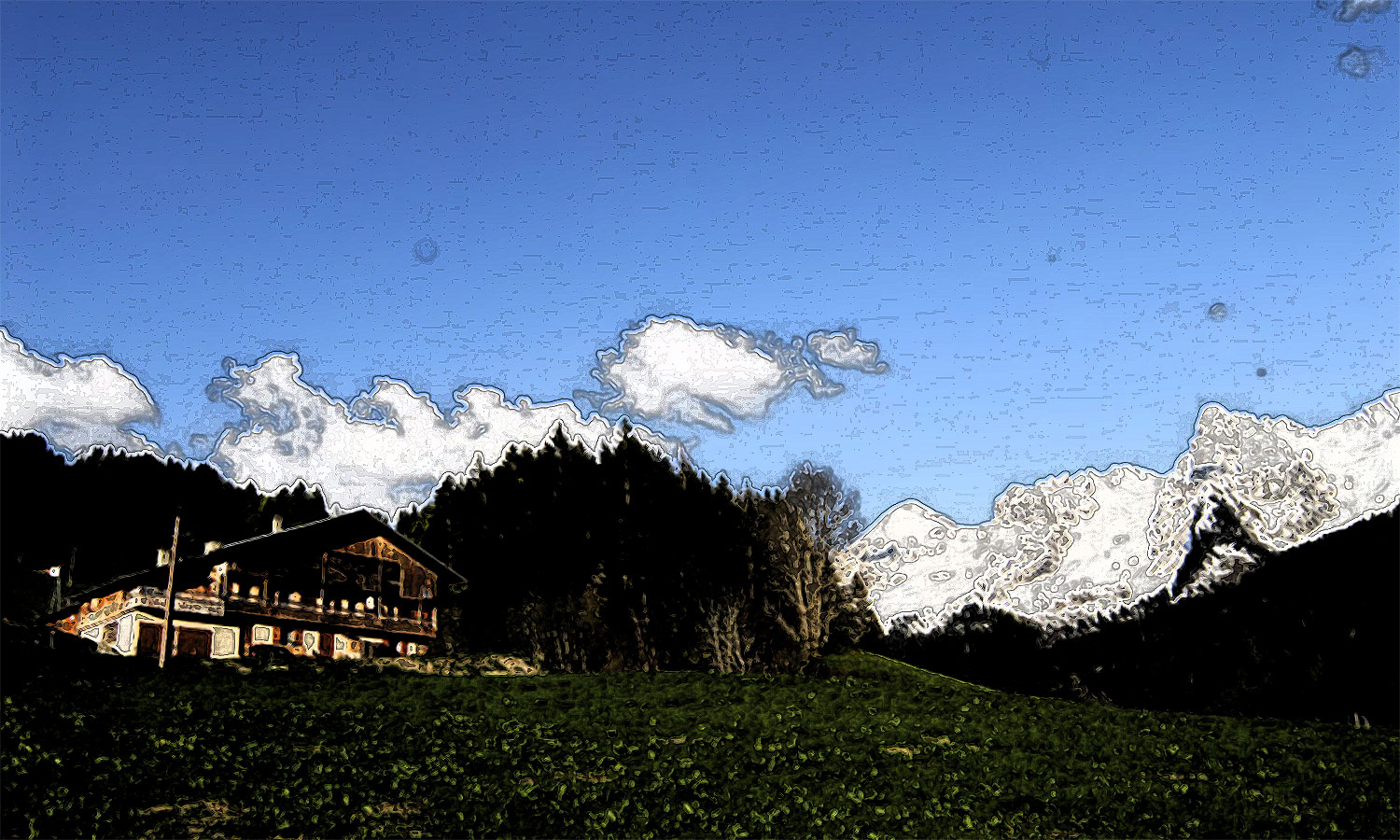 For my four years, my parents bought Erquy’s house. The next fifteen years we spent all our holidays there. Initially, there was only one long-lived pink sandstone farmhouse that Picnic occupies today. When the family grew with the patches, sons and daughters, Papa had another house built in the magical garden. I receive passing friends.

I live in the old garage at the top of the garden. A splendid view. I have everything done again. Facing the sea, in the middle of the flowers, I look at the sun shining on the sea. Wind is rising on the bay. The tree that I planted that year, in the summer of ’53, dominates the hillsides around it. Its shadow deprives me of the sun until noon. But for nothing in the world I would not put it on the ground. He is the flesh of my flesh, I am of the wood of which we make trees. Thanks to him.

Dad had picked up a sprouted pine cone on the Portuais moor. “Look at this, my Pippala, we’ll plant it in the garden, and it’ll be a pine tree soon.” A bread?bread is pain, pine is pin. Homophony. I understood everything wrong. I was 4. It has not changed, I’m 70. Daddy called me Pippala when he was really here on earth. The rest of the time he was dreaming so high that he was unaware of our existence. I did not really know him until much later. There is a time to everything. Sometimes we are not ready. Expect. Everything comes at the right time if you got enough patience.

Mom arrived a little later, young mother she was, with my little sister in a basket. I remember the first time I saw Picnic. Her round face. Later she wore mats. Her blond hair and her astonished look all the time. As a baby, she wondered what she was doing there. We all ask ourselves the same question when we arrive, then we pretend, nevertheless we cannot believe it inside. In the Picnic case it was obvious.

Mom nursing a baby. So cute they were both. I’ve never seen that. The twins did not care, they had already nursed with me, no desire to put that back. They decided that she had no interest and kept her in this position until now. Mastic asked me one day: “Do you think Picnic really belongs to the family?” Mastic is insane.

These are some of the facets that come to mind when I think of Mom who takes care of her Bateleur. But it stopped soon after. She had a brand new Bateleuse. Work to be done. More bread to earn. And it was not over. 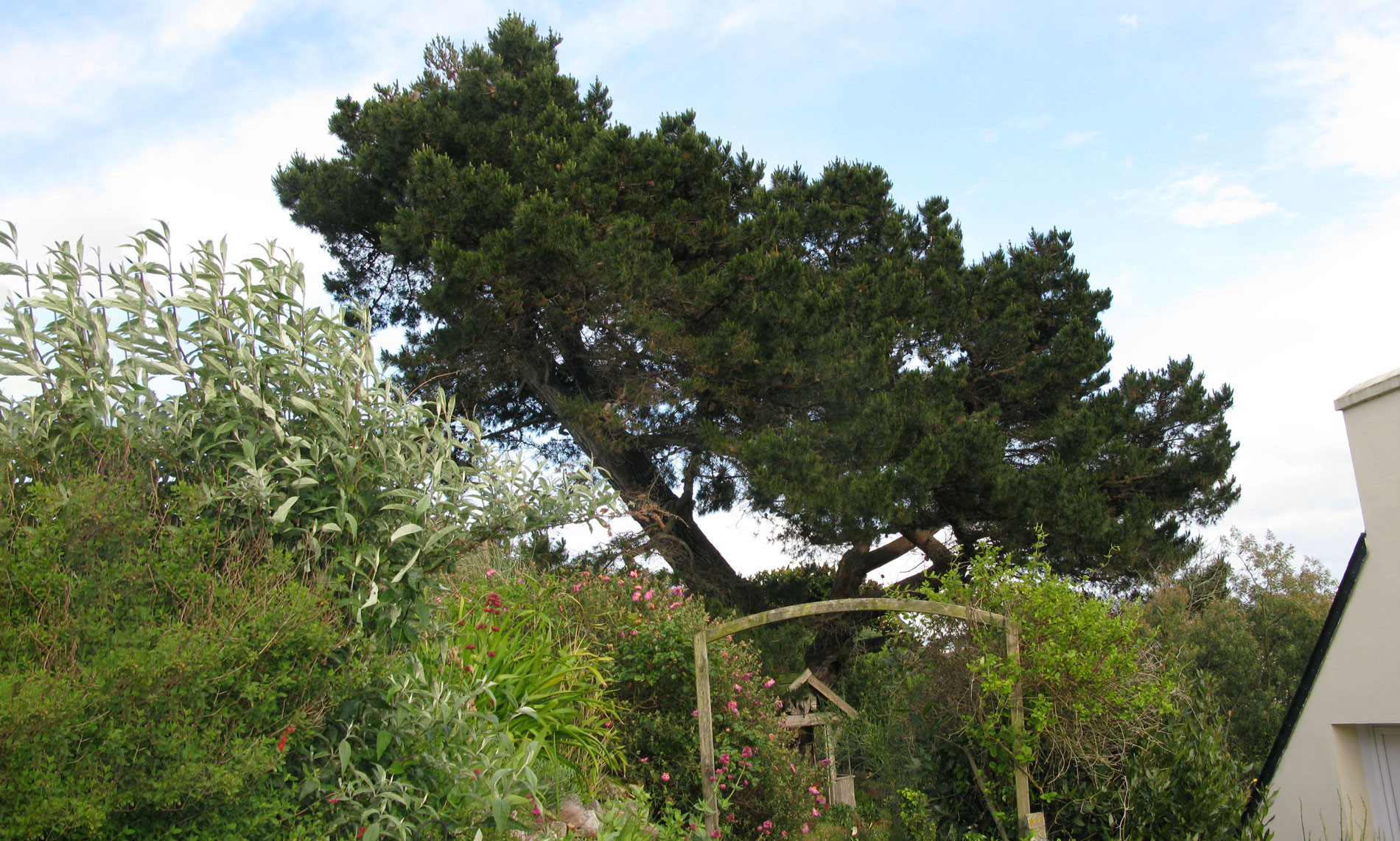