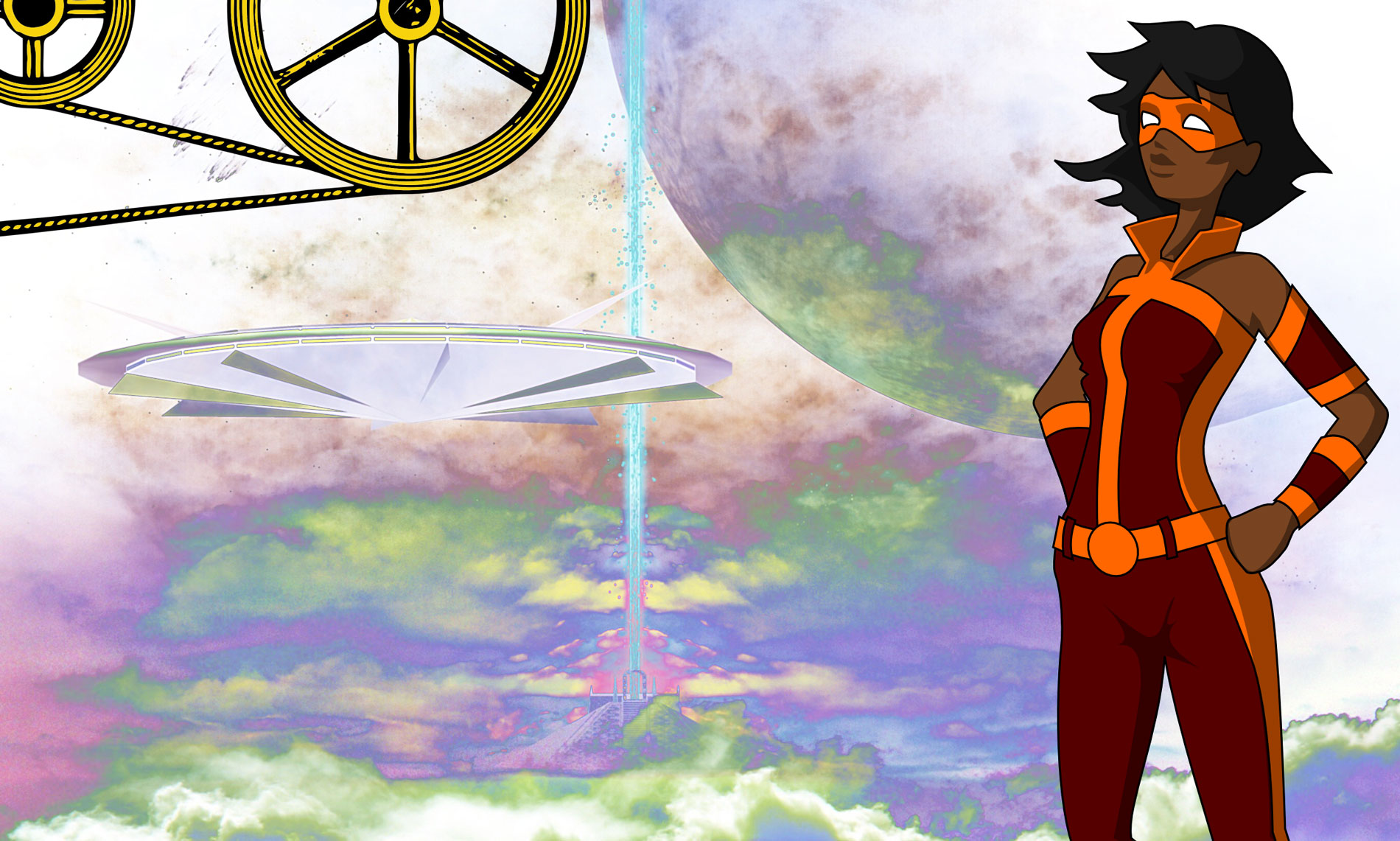 As I reread Bergson for a previous article, I came across the following text, in which the philosopher evokes a very present notion in antiquity, so present that I have always wondered why. Thanks to Bergson for finally bringing me the answer!

Ancient wisdom “explained the regular succession of causes and effects by a true deus ex machina – it was sometimes a necessity external to things and hovering over them, sometimes an internal Reason, guided by rules quite similar to those which direct our conduct,” writes Henri Bergson in his Essay on the Immediate Data of Consciousness. I’ve already explained his guiding ideas, I wont repeat, pls click the previous link. Here my interests goes to his concept of deus ex machina, which remains misunderstood in its deep meaning by most people.

Anyway, thanks for the quote! I’m delighted, I’m laughing, I’m amazed. I’ve just grasped what it means, by the way I see why dear Bergson could not understand in his time. Why ? This guy is smart, nothing to do with that. But it was too far from the way of thinking that prevailed then. When ideas are not in the air, nobody can find.

Deus ex machina, the god comes out of the machine, fundamental and founder concept. Fundamental: it sums up a mountain of misunderstood maintained for ages. Founder: he inaugurates a new reading of antiquity, and of the period that preceded it, ie protohistory. This period is not silent. It is told through texts unfairly relegated to the radius of curiosities, if not that of nonsense and bullshit. These texts, essential to my eyes, are called myths. Every old culture has its mythology. All planetary mythologies tell the same story.

Courtyard side, garden side

In fact, what Bergson could not understand is all I tell you in these pages. The paradigm shift of the third millennium brings us to turn our gaze and see the world from another eye. This is what I undertook to show in the 700 articles on the date I publish this one of this site. Before giving my point of view, I would like to recall the accepted meaning of deus ex machina.

Here is the definition given by Google: Deus ex machina, invariable masculine name – In the theater and figuratively in life: Character, event whose unlikely intervention brings an unexpected outcome to a situation without a way out or tragic.

Here is the definition of the Larousse, more relevant by its precision: 1-In a play, intervention of a god, a supernatural being descended on the stage by means of a machine. 2-Character or unexpected event coming to unravel a dramatic situation.

Here again is the definition of Wikipedia, as incomplete as that of Google: Deus ex machina is a Latin phrase meaning God descended by means of a machine. At the theater, a person who arrives, impromptu, at the end of the play and by whom the denouement takes place.

On the court side, it is a machine like those used in temples to make believe the divine omnipotence in a naive public. On the garden side, it is all artifice that allows to unravel in extremis an inextricable situation. This is the favorite use of screenwriters.

Well, I think we understood what it is. On one side or the other, the deus ex machina is a trick. A deception. We conclude that the most effective divine magic is based on special effects and pretense. In any case, it is the impression given by the god of the machine.

The chameleons of the puzzle

Let me explain the idea that came to me. The stories I tell here are not free invention. They are the result of a lifetime of observations, readings and strolls on the timeline. And all these elements brought back, all this heteroclite bric-a-brac has formed in my head and in my heart a puzzle certainly still incomplete – will it never be complete? Still, I live with him.

My living puzzle is always looking for a new piece that is missing. All I look at, I observe it through this filter. Everything I explore immediately takes on the color of the puzzle, and comes automatically match with it. The world is a chameleon that marries every shade of the current puzzle. I am a chameleon myself. And my discoveries are so many little chameleons, always ready to marry with other chameleons that grow in my puzzle for years sometimes.

This strategy, which is not one, has become a way of being. I react a quarter turn, an idea is needed, develops, that’s it, I got on my hobby. And you who am, admit it, you only wait for that. You ask for more. So listen well. At that time, humans were simple and crude. They had a magical vision of their environment. The gods walked among them, who considered them masters of magic. Our ancestors had noticed their ride. As soon as an inextricable situation arose, a god arrived illico presto at the controls of a terrible flying machine. He settled the case in three spoonfuls. Then he descended nobly from his turbo jet. It was the god coming out of the machine, it was the deus ex machina. 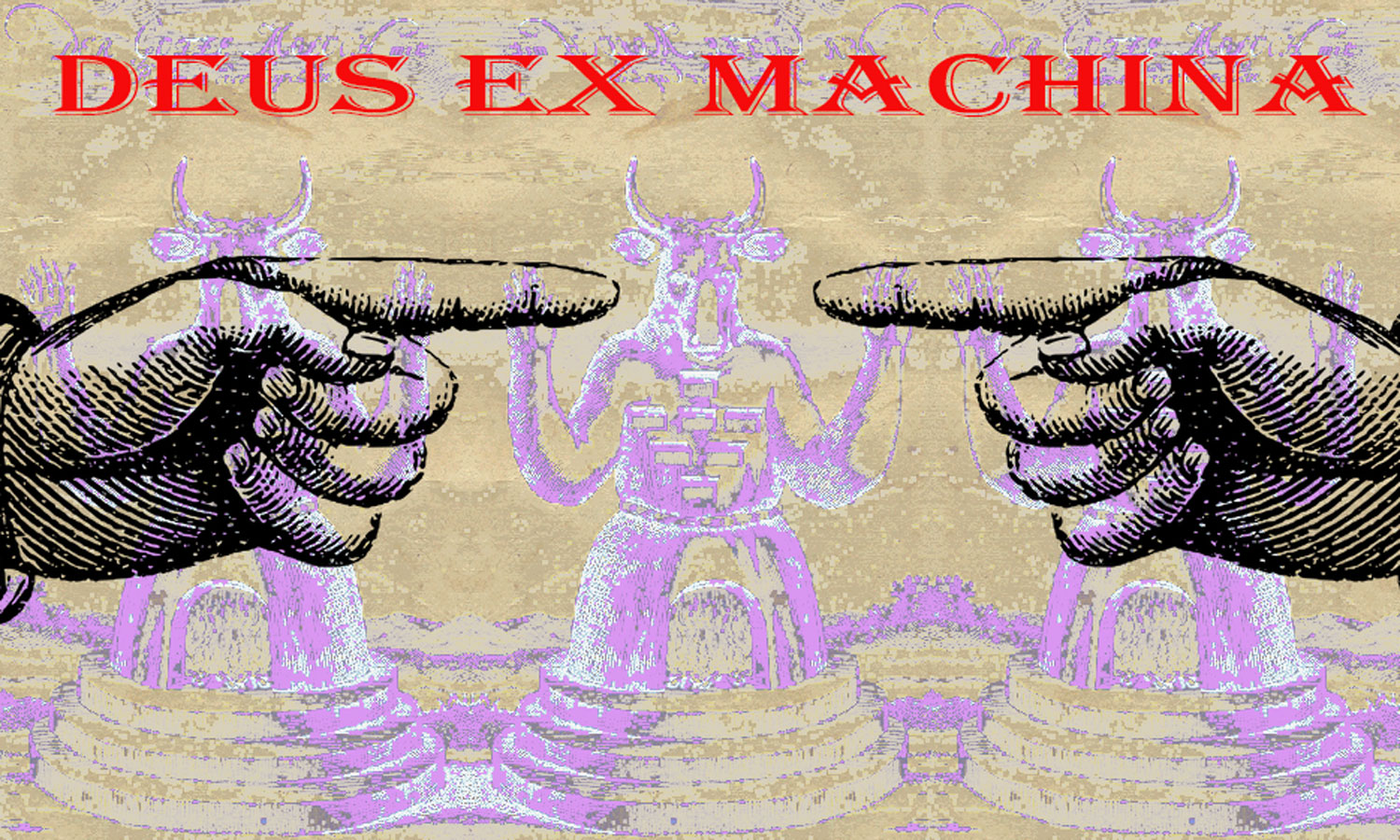 For the simple people of this distant time, everything ended with the miraculous arrival of an almighty in his machine. They watched him straighten a wall or a megalith, tear down a tree, dig a well, build a dam, drain a swamp, and they always saw the god as a mechanical centaur, being one with the machine he drove. When everything was settled, the god came out of the machine. And humans admired him.

There was nothing religious about their worship. It was made of respect and fear, as in the face of the forces of nature. When the lightning ignited a tree or when the god burned a forest, people felt the same thing. That the god uses his laser beam, that escaped them completely. For them, he commanded the lightning. His discretion to kill or remove people made him dangerous, terribly. Hence the Qur’anic verse: “Fear God as he deserves to be feared.” He comes from the beginning of time. It comes from dawn, when the giant gods walked among humans. It expresses in a few words this memory of terrible gods, all-powerful, formidable.

A long time later, another memory floats in the collective unconscious: the god of love. It would be better to say the goddess of love, since it is a goddess who commanded the gods. Like the queen of bees or ants. The Mother Goddess. Isis and the child Horus. Pachamama holding a human standing on his lap. Even the size is the same. The child standing on the knees of the Black Virgins is not an ordinary baby. He represents, on the scale, a small human on the knees of a giant goddess.