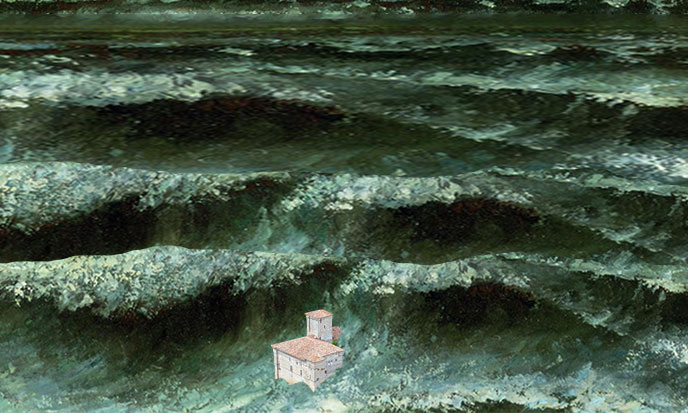 At the end of Ice Age, say the geologists, began a fabulous thaw. Huge icebergs came off the vast ice sheet that covered the whole north of our hemisphere. A titanic collapse urged the melting and the dismantling of huge glaciers on three continents.

More Than A Flood

In the memory of peoples, the saga of floods was about to start. “Many glacial lakes, sometimes huge, were forming in America and Eurasia. The Baltic Sea basin contained one of the biggest: the great lake of meltwater of the Baltic Sea. It was about 30 yards above the sea level, before flowing into the North Sea, in early Pre-Boreal Era, around 10,200 BC, causing what an archaeologist has described as ‘a major ecological disaster’.” (source)Huggett 1989, quoted by J-M Greer, Atlantis, p.158

Indeed, the geography of this whole region
would experience a terrible upheaval.

Birth Of A See

At the time, England was connected to the continent by a narrow strip of chalk cliffs, white, which traces can be found in Dover as in Etretat. The North Sea did not communicate with the Atlantic Ocean, as the Channel did not exist. Instead, there were meadows and forests where hunter-gatherers lived among all kinds of animals. But the great Baltic lake broke the ice dam that held it thirty yards above the level of the North Sea.

Then a huge wave, charged with mountains of ice, fell on this line of cliffs. Under pressure, the rock cracked. Chalk began to melt, the icebergs were swallowed up in the breach. Splitting the natural dam, cataracts formed a roaring torrent that would become the British Channel. A cannon shook the Earth. The huge dam had broken.

Waters rushed into the breach, tumultuous ice cubes broke the cliff, while the waves were carrying away pieces of white chalk. Hunter-gatherers saw a wall of ice arrive, icebergs carried by the Mother of Waves which have blown them like straw. Devourer, the new sea erased the valleys, raked farms and villages, engulfed men like demented ants at the bottom of their burrows. Huts and crops, barns and kilns, any human trace disappeared. Except a large white pyramid that was swallowed without damage.

The multimillenial memory of this inexorable rising waters still finds echoes in many legends of sunken cities. In Britanny, it is the city of Ys, also known as Is, off Douarnenez (Finistère), or that of Nazado off Erquy (Côtes d’Armor). Decorated with a truncated pyramid, the white Ys was a pre-Celtic Capital. It lies, they say, off Douarnenez, deep in the Baie des Trépassés.Bay of the Dead At high tides, its bell tower emerges and rings its death knell. Nazado, in Côtes d’Armor, was exactly the same origin.

Nazado was a powerful Neolithic city built around a large white pyramid. It was located off Erquy, somewhere between Cap Fréhel and the island of Guernsey, on the reefs of Minquiers which then dominated the southern shore of a great river formed by the Seine, the Somme and the English river Solent. The legend remains very much alive, the name of Nazado still baptizes mansions, shops and trawlers. In summer, it sometimes adorns the shirts of tourists.