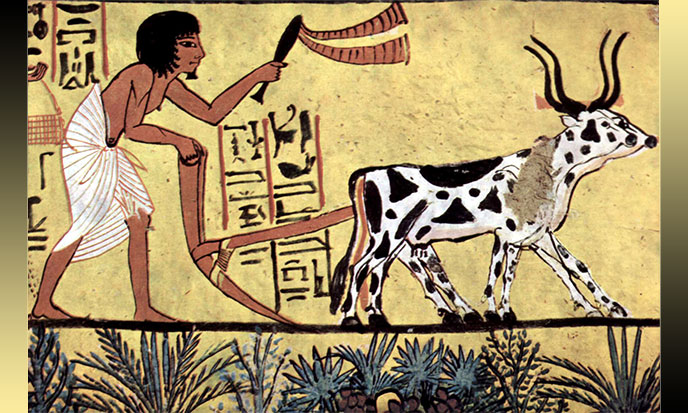 Our Paleolithic ancestors were hunter-gatherers such as the Omos, the Papuans or the Yanomanis. And then, suddenly, here and there, they became farmers and ranchers. Why and how did it happen? Two different scenarii are possible.

Regarding the emergence of agriculture, the official line is part of darwinism, Bryan Sykes tells this ‘main stream’ version: “10,000 years ago, our ancestors, hunter-gatherers had spread worldwide, excluding the least accessible areas, such as Polynesia, Greenland, Iceland and Madagascar. The men were traveling in bands of ten to fifty, living on hunting, harvesting tubers and fruits.” Until now, it looks allright. Wait and see … The coming step is quite different.

“Then, independently and at nine different times in at least nine parts of the world, began in earnest the domestication of plants and wildlife. It began first in the Near East approximately ten thousand years ago,” (source) or rather 2,000 years before. The Egyptologists have noted indeed the first appearance of agriculture in the Nile Valley in Egypt, 12,000 years ago. And we believe the andenes or agricultural terraces in the Andes are older, some dating back over 15,000 years. But let us get back to the main stream version.

“Within a few thousand years, new agricultural centers appeared here and there in India, China, West Africa and Ethiopia, New Guinea, Central America and in the eastern United States. It was not an abrupt process, but once it had started, it got an inexorable and irreversible impact on the trajectory of our species.” (Source) Such is the official version of our proto-history. To say why agriculture arose in this way, from -8000 and in different parts of the world, Pre-Historians are quite incapable.

If we made a side step out of main stream History, we can see quite a different picture. By basing on the same facts, the world’s mythologies give us another story, likely to shed light on this enigma.

Here is the narrative: “12,000 years ago, our ancestors hunter-gatherers saw coming among them more learned men who taught them agriculture, livestock and other crafts. These newcomers, they called them civilizing gods, because before them, the hunters were like wild beasts. The civilizers were not gods, but men. Having inherited the knowledge of their engulfed civilization they have created a new world.

And they began to sow the land of the wheat seeds of Osiris. And they taught to the humanity which had returned to barbarism how to escape their brutish condition and access, almost without transition, to the civilization and its benefits.” (source)© Xavier Séguin for eden-saga. Like everything in the text This likely scenario has the merit to follow step by step narrative of universal legends, which makes it more credible. But for the prehistorians, even if it suits with the facts and dates, his main fault is to betray the doctrine in place. 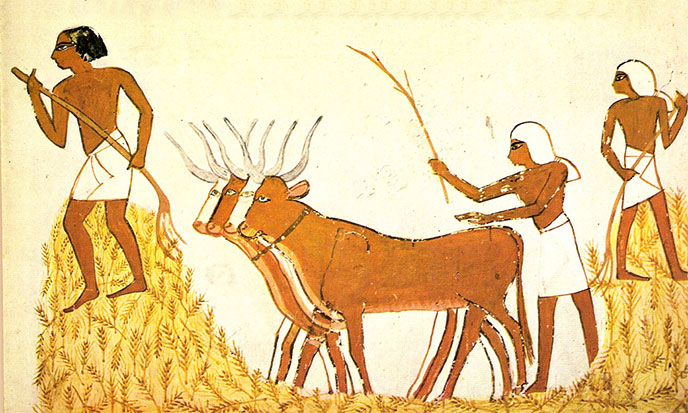 So why not abandon the dogma and return to the scientific method Because there is another obstacle, a huge one. Where did they come from, these so educated men? From distant stars? Some said that. But why not from our good old Earth? These supermen could be the survivors of a civilized world with several technological nations, before the great flood, some 13,000 years ago. In that case, why is there no trace of the agriculture before the flood?

In fact, traces exist: “Some corn pollen, older than 80,000 years, was discovered in Mexico, whereas according to mainstream science, the corn would have appeared in Asia about 9000 years ago.” (source)Maurice Chatelain, Our Cosmic Ancestors, ed. du Rocher 1981

Some farming settlements estimated 40.000 years have been recently discovered.

So why academic history does it cling tooth and nail to an erroneous vision of our past? Because traces of earlier agriculture are too rare.

Because agriculture was long time the privilege of the island Atlantis  and its main colonies. And the flood, engulfing the island, has also removed the traces of its agriculture.

However, we have converging evidence, as the Greek myth of the Hesperides, and his fabulous garden where golden apples grew. Or as the Aztec myth of Quetzalcoatl, who brought agriculture and craft in Mesoamerica. Or as the Egyptian myth of Osiris, the creator of men on the lands of Amenta. 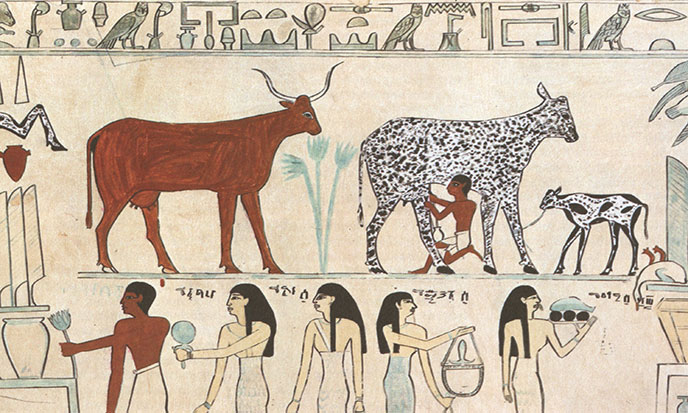 Osiris to whom the Egyptians attributed the creation of the wheat that bears his name, and whose ears, if you believe the ancient frescoes, exceeded the size of those of corn! In several passages of the Ptolemaic texts, Osiris, creative and nurturing father, is presented as the inventor of wheat. So speaks Pharaoh coming before a statue of the god:

“I come to you, elder in the womb of his mother, King of the Two Lands, chief of the banks. I bring you the grain offerings together to double your desire. So you will be happy in your heart, [you] the god who grows the grains for thou hast created the wheat to make men live.” (Source)Ptolemaic texts

Osiris the Atlantean is considered the creator of wheat by the ancient Egyptians, and it is also in Egypt than wheat reappeared in 10,000 BC before disappearing again after only a few centuries ago. Previously, agriculture had been mainly developed on the island of Atlantis. But not only there. There should be traces elsewhere, in the huge Atlantean empire.

For obvious food reasons, the Atlanteans had brought their farming techniques, far before the flood, in most of their colonies. So people could think it would be possible to find traces of them.

Unfortunately, the Atlantean colonization was located on the coastal fringes of continents. And since that time, the sea level has risen of 150 meters. As the mother island, the Atlantean colonies lie at the bottom of the water. Except those who were at high altitude, as the Cities of the Peaks.

As in Egypt, the civilizing god of the Andes, Viracocha, also gave a valuable cereal to men, corn. It was under his leadership that were traced and built the countless andenes and irrigation canals. At the other end of the world, in the brilliant hydraulic civilization of the Indus Valley, it is the civilizing god Vishnu who is believed to have brought rice to Manu, the first man. In Africa, the Dogon have a similar legend with the god Nommo who gave millet.

Indeed, in the Andes, the countless terraces which gave their name to the Spanish cordillera show a prestigious agricultural past and a long control of irrigation techniques. The “Hydraulic Civilizations” of Pakistan and north-west of India showed the same mastery.

But in Asia as in America, the dating of these civilizations is lowered by the thinkers of that time, due to the ideology in those days. The ‘main stream’ archaeology totally conflicts the evidence that expresses through art, literature, cinema and the history of thought.

The antediluvian planetary civilization revived agriculture after the flood. The Antediluvians provided tools, seeds, and methods. They improved the genes of plant and animal species. If the antediluvian agriculture did not leave some trace, the megaliths, pyramids, Cyclopean walls and andenes are all vestiges of their genius. To find their sunken cities, just dive on the edge of the continental plateau, which was the antediluvian shore.

All reality exists in the mind. The outer phenomenon, that which appears, is only its outer expression. The visible universe is the reflection of the invisible,