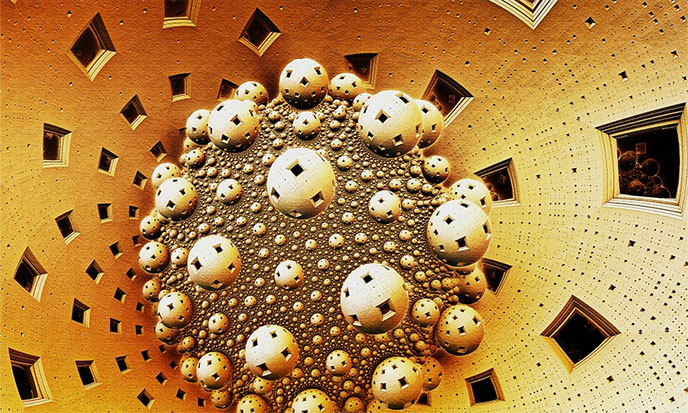 A bombshell rocked the astronomical community: NASA reveals that all planets are hollow, even ours. Had been hidden to us so long, now we have to cope with it. Even if the news makes sense, it is surprising to figure out so much space under our feet. Unless our hollow planet is inhabited by others?

NASA even think that the Moon is hollow.  (source)  Old tune suddenly becomes new. Hollow but natural? Or hollow since artificial? It would be the perfect place to observe the Earth, right?

Just think of the incredible support of astrophysical circumstances that the Moon rotates on itself in exactly the same time as it orbits the Earth. Result: it always shows the same face, which could well be a hologram.

While the dark side can be used to hide many things, including the approach of a spaceship to a lunar base … There are only very few available images of this side, at a very poor magnification ratio … see next picture.

When you see the big white eye of the full moon shone on you, remember to behave yourself: the bosses are watching you. But remember also that the watchmen are seeing you all the time, even in the dark moon. They stand up there, comfortably installed in their well appointed hollow satellite, with an inner ocean of drinking water, and they keep staring at us without end or truce or respite.

Wait, do not shrug your shoulders, do not laugh out loud, it is entirely credible, just read the following lines. The case of the Moon deserves attention, and its trial must be instructed in the utmost impartiality. First, I have mentioned the amazing coincidence that the Moon rotates on itself at the same time it revolves around us. There is not one chance in a billion that this inexplicable peculiarity is natural.

Not to mention that the Moon is ~ 400 times smaller than the sun in angular size and ~ 400 times closer to us. It therefore has the same apparent size as the sun, which it completely masks in case of eclipse. In addition, the Moon protects us from asteroids and manages our tides. And all of NATURAL way, we are told. Hum!

Amateur astronomers who observe the Moon whenever possible have found in decades of observations some strange phenomena occuring on the visible surface, ie large spots of lights, with elliptical or circular shape, roaming the Moon at irregular intervals. The diameter of these bright spots varies from a few hundred meters to over a kilometer. No scientific explanation has been given ; on the contrary, professionals deny the reality of this phenomenon – yet quite observable.

You tell me, what prevents amateur astronomers to look more closely at the thing? I’ll tell you: if an individual wants to buy a telescope, the power of it will necessarily be limited: there is no professional telescopes on the trade, the amateur will be satisfied with a magnification ~ x150. This allows well to observe the surface of the moon, but absolutely not to discuss the details.

Yes, you read right, only twelve moonwalkers, since lunar exploration lasted only four years. Since then, no one is returned. There must be a good reason for that, right? The reason given by US President Richard Nixon is the extravagant cost of these lunar missions. Oh yes? And the cost of the space station is a gift ?

When there was a more comfortable and free space station a little further ahead, they chose to build an expensive one. The Moon seems made for it, why despise? Think efficiency of the Hubble Space Telescope, if only it had been installed on the Moon, instead of being in close Earth orbit? Why didn’t we ever returned to the Moon for nearly fifty years?

Why no lunar expedition has been organized since the first US astronauts? What have they seen on the Moon? Clear evidence of the artificiality of this satellite, as well as his longtime occupation. Traces of intelligent life. Perhaps wheel tracks, footprints, like Hergé suggested in his visionary album Explorers on the Moon. Or detritus of all kinds, like empty cans or bottles. Decorative elements, metal frames, holographic projectors, and most of all !! Aliens. 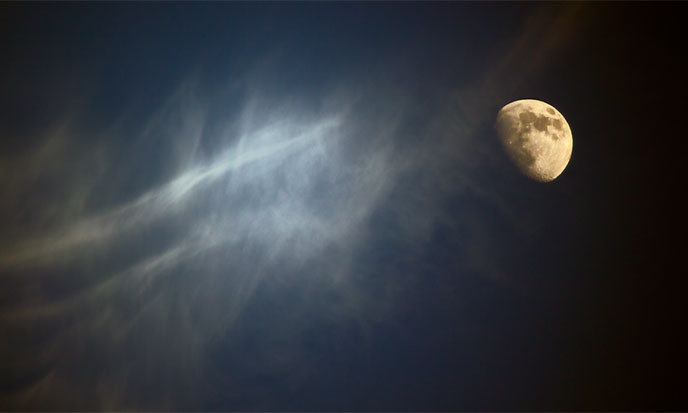 Wait! Yet NASA showed us pictures of the first moon landing in 1969. The nude and gray soil of the Moon, and the US flag planted in the dust. Yes, we were then hundreds of millions of viewers to watch, breathless, this incredible feat. Except that since doubts have arisen. How is it that the famous US flag, suddenly, to be put to tremble under the clear effect of a draft? How can???  There is no atmosphere on the Moon. Or did they lied about that too?

Anyway, a lot of nosy ufologists are confident that the film of Neil Armstrong taking his first steps on our satellite was a fake. (source) The actual location was identified by these amateur scientists: it would be a US desert. NASA feared that the landing fails, and at that time the United States could not afford a misfires in the space race, when they were overtaken by the Russians, at the height of the Cold War. NASA had therefore shot a fake moon landing on Earth before shipping.

And when Armstrong landed on the moon, he saw the whole scenery there, he immediately concluded that we could not see that. Thus instead of the real images  NASA played the short recorded film with the famous phrase “one small step for man, one giant leap for mankind.” It was all recorded. No direct, you’re kidding, too much risk.

I see some who do not take my word. They are right, don’t just swallow any raw information you get around. Reflect, use your guts and brain, weigh the different solutions, make your own opinion. It’s the firts rule of this site, believe with disbelief. But also be honest and persistent.

Sergeant Karl Wolf told the Press about how he saw photographs of an ‘alien base’ on the ‘dark side’ of the Moon: “he was showing me how all this worked and we walked over to one side of the lab and he said: ‘By the way, we’ve discovered a base on the back side of the Moon.’ And at that point I became frightened and a little terrified, thinking to myself if anybody walks in the room now I know we’re in jeopardy, we’re in trouble, because he shouldn’t be giving me this information. And then he pulled out one of these mosaics and showed this base which had geometric shapes that were towers. They were spherical buildings; they were very tall towers and things that looked somewhat like radar dishes, but they were large structures.” (source)

The text quoted in reference is on pages 315 and following. I encourage you to read it all -if the English language is familiar to you- for it contains amazing revelations. David Icke explains how the Moon was made by reptilian aliens, who use it as a secret base, as an Earth observatory, and as a platform for close intervention. We must not believe all as you know, but his assertions are more than troubling. 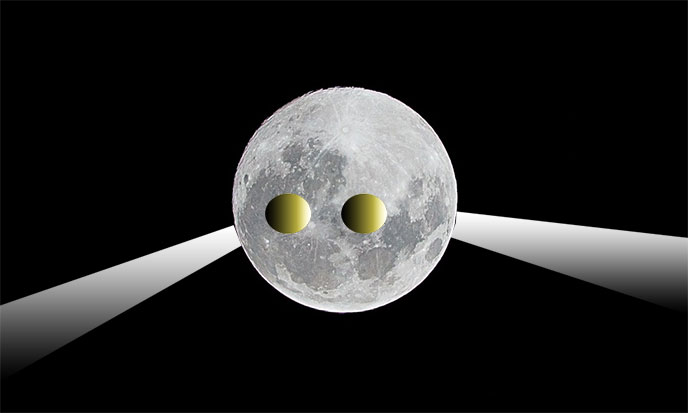 Among the US astronauts who walked on the Moon, several turned insane. Some started sects. The shock of this discovery and the weight of this secret proved too heavy for these seasoned soldiers.

Yet they are very special people – handpicked, highly trained, experienced in all spatial disciplines, with unique psychological and mental stability that earned them admission to this exceptional program. So ?? What have they really seen the moon? Who did they meet there?

They saw things impossible to show us. Unimaginable things. They met the former gods, they talked to those who have been terraforming the Earth for three billion years, those who created all living things in it, to complete their work with our species, so that we take their place as gardeners of this garden and custodians of this zoo. The almighty ones did not welcome them on the Moon. Preserve. “Go home and do not get back,” they told them. The US astronauts returned, and since then, no one has set foot there. Everyone acts as if the moon was no longer a goal.

“The great Russian newspaper “Pravda” reported October 5, 2002 that traces of civilization have been discovered on the moon, including those of the presence of inhabited cities! Under the pretext that we would not be even able to digest psychologically, those who govern us seem to have decided once and for all it was better to hide the truth to the people of Earth.

In Europe as in the United States, and we are once again faced with the blackout imposed by the disinformation campaign that governs the world. For it seems that there are cities not only on the Moon, but the Moon. These are actually some of which bases are populated by humans and other aliens.”  (source)

I’ll tell you the idea that came to me. Formerly the Terraformers caused several floods by landing their mother ships in the world’s oceans. Just think, these motherships measured more than 3000km in diameter!

When the Atlantis spacecraft landed in the ocean that bears its name, it was almost the whole distance separating Europe from America, and there were only a short distance to travel to reach the coast on either side. This is consistent in the words of Plato.

After raising tsunamis in the Atlantic, the Indian Ocean and the Pacific, the terraforming gods remained stationary orbital VBOL above the North Pole. Their mother ship at that time, was called Hyperborea, which means “above the North Pole.” And then they left.

Now you get it. The moon is a mother ship inhabited by our famous terraforming gods. They are always there in front of the telescope and emitting radio waves or others. Always there to watch us day and night, to control us, to lead us probably. Behind a smokescreen of false lunar surface, they have their comfortable, technological facilities, and they continue to steal our children for their sex parties.

And those who are not on board orbital spacecraft called Moon are on board other vessels, which, coincidentally, are exactly the same size. Many UFOs of this type and of this format have indeed been reported orbiting around the sun. They arrive, and believe me, there is nothing to rejoice. No Alleluya.

Those gods are crooks, hackers, pirates, child-slave drivers who do not care about your prayers. Those gods are hypocritical, vicious, human too human, and yet totally devoid of humanity. They do not deserve our respect for their behavior towards us. But you can not choose your parents …

God is a concept by which we measure our pain. I just believe in me – Yoko and me – and that’s reality.