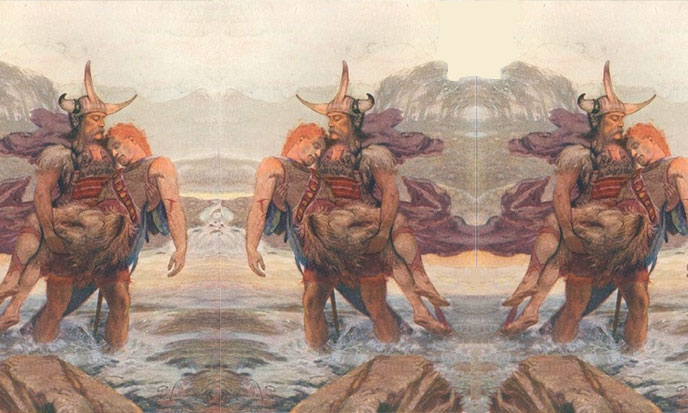 Why did Cuchulainn kill his son? It is quite simple. Cuchulainn went to learn the art of war with Scathach the Wild, a warrior princess of the Island of Shades. He went there and served the magician.

Scathach dissuaded Cuchulainn to challenge her sister Aoifa. It does not take much to tickle the pride of the giant who overcame Aoifa by treason. Then she became his mistress and told him that she would bear a son. Cuchulainn then slid out the signet ring of Lugh he wore on his finger.

“Keep this ring until it goes to your son, he told his lover, then he comes and get me in Ireland. No one will divert his route, he won’t let him know to anybody and he won’t avoid anyone!” Then Cuchulainn ordered his squire to harness the terrible scythe chariot, bristling with blades, strap on his body seven bull skins that repel arrows as stone or horn, and takes over the mantle of the fairies, who gives invisibility. As he remembers all the dead heroes, his warlike fury increases; excruciating pain twisted his body.

In magical metamorphosis, his flesh trembles in his skin as each join shivers, his muscles are formed hideously. His face is deformed. Through his gaping mouth are sometimes shaking his lungs and intestines, sometimes shooting jets of flame. Torch hero goes out of his forehead, as long as a scythe whetstone.

Above, firm as a ship’s mast, is drawn a line of purple and black blood that flows to the zenith, then disperses across the sky when a dark cloud takes place. Then he rushes on the army, most dazzling than lightning, and his scythe chariot, pruning blades, hooks, harpoons, forks, claws and scissors starts to carve, to tear, lacerate, amputate and dismember thousands of terrorized Irish warriors. Invisible next to him were fighting his grandfather McBigh the Long Handed god and his father Lugh, son of the Sun, the god with sparkling face.

The day of his seven years, the child went to fetch his father. Ulster warriors saw coming towards them a bronze boat and in the boat was a boy, golden oars in his hands. He put a stone in his sling and when he threw the stone in his right hand it immediately turned into a bird that landed on his left hand. 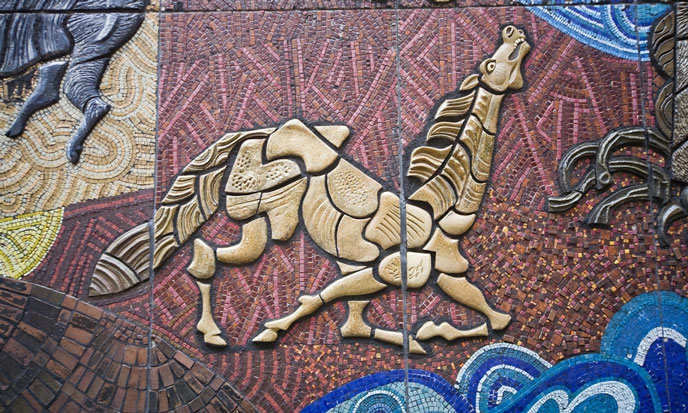 “Holy shit, said the chief, if a kid can do that, I prefer not to see their adults! Another fucking magician from Island of Shadows where fucking Scathatch sharpens her fucking spells, I do not want that crap around! – Who will prevent him from landing ? asked Cono Tough Guy. – You, the chief said. – Why me? Cono said. – Why not? said all the others. Cono went. The boy approached the shore. “Stay where you are, Tough Guy said, and tell your name, kid. – I don’t let me know to anybody and I don’t avoid anyone.

– In this case you won’t land, said Cono handing his weapon. – I’m going back where I come from, said the young man. – Not so fast, pretty face! If you think your fucking magic scares me, you’re fucking wrong! – Forget it, said the boy, even if you had the strength of a hundred men, it won’t be enough to beat me. – Fucking sorcerer, says trembling Cono.

He went back to the Ulster heroes to designate another champion. “Nobody trample honor of Ulster as I live !” said Conahr the Victorious. “Let me see what you play, kid, he said. – This is not your age” said the boy putting a stone in his sling. He launched into the air by twisting so well that it made the sound of thunder. This roaring sound threw Conahr on his back. Before he get up, the boy had tied his hands. “Okay ! Conahr said. This baby wants war, but it won’t be against me. Whose turn, my champions?”

It was a mission for Cuchulainn.

Cuchulainn was already walking towards the kid when his beloved Emer put her harms around his neck. “Please don’t go, she said, it’s your son down there ! Listen to me, I speak the truth, please take my word!  – If he is my son, he will let him know. If he is not, he will die by my hand, said the giant. Come, speak, child! Who is your father, what’s your name, where is your land? – I don’t let me know to anybody and I avoid nobody, replied the child, faithful to the given word. – In this case, you will die! – You said so, said the child coming upon the hero. They hit each other. The boy cut his hair with a well placed sword. “Stop kidding! said Cuchulain. Fight for good.

They went into the sea to drown one another, and the son did him dive twice. Half drowned, Cuchulain betrayed him with the Lightning Spear (Gae Bolga – lightning spear) Scathach had given him. He throws Gae Bolga against the son whose guts fall on the feet. Only then Cuchulainn remarked Lugh ring on his son’s finger. His wrath falls as suddenly as the guts of the boy. “So that’s what Scathach did not teach me ! Woe to you who hurt me ! said the son . – It’s true“, said Cuchulainn.

He takes his son in his arms and carries before the warriors. “This is my son in front of you, O famous men of Ulster, he said. – True, said the son. If I had stayed only five years among you, I would have defeated the men of the earth, westward as eastwards, you would have had the largest empire from the Fortunate Islands to Cambay.” Then he put his arm around the neck of each of them one after another, he bade farewell to his father and died immediately. (source)The different celtic legends