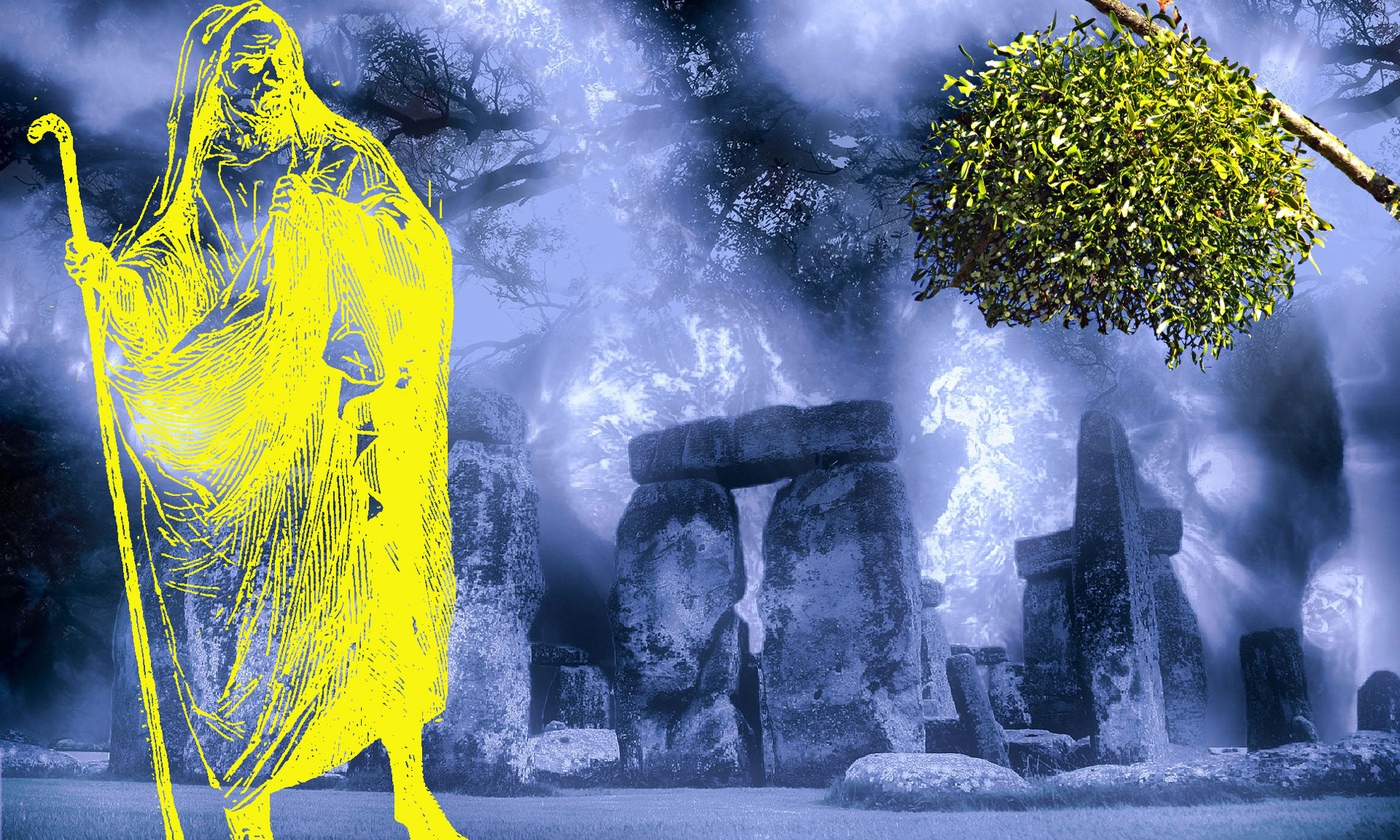 Our ancestors the Gauls practiced a forgotten religion, Druidism, also called the Old Religion. There is a good chance that it has been the religion of the Tuatha De Danann, themselves heirs of Atlanteans beliefs.

The Old Religion is primarily the worship of the great goddess. There was a time when all Druids were druidesses, ie female druids. And then came the decline. Historians have knowledge of the declining phase, which seriously distorts their understanding. “Druids do not go to war and pay no tribute imposed on other Gauls. Seduced by such great privileges, many Gauls were trying to enter into this order. But it was necessary for this, to learn a great number of verses, and some spent twenty years in the novitiate. It was not allowed to entrust these verses to writing, while in most other public and private affairs, the Gauls used Greek letters. There is, I think, two reasons for this purpose : one is to prevent the science of the Druids spilling into the vulgar and the other, sitting on writing, their disciples would neglect their memory.” (source)D’Arbois de Jubainville, Revue de l’histoire des religions

Recent studies suggest that only the elements memorized are used later by the student. Celtic method was therefore better than ours. Islam still uses this method in Koranic schools. “Druids taught that matter and spirit are eternal, that the substance of the universe remains unalterable under constant change phenomena dominated in turn the influence of water and fire, finally the human soul is subject to metempsychosis” (source)Jules Michelet, Histoire de France

Metempsychosis is an old word for belief in past lives and future lives . It was indeed one of the bases of the Druidic religion and a source of great courage Gallic warriors recognized by Julius Caesar. “A belief they seek primarily to establish is that souls perish , and after death they pass from one body to another, a belief that seems singularly their own to inspire courage in away the fear of death. The movement of the stars, the vastness of the universe, the size of the earth, the nature of things , the strength and power of the immortal gods , these are also the subjects of their discussions , they are transmitted to the youth.” (source)D’Arbois de Jubainville, Revue de l’histoire des religions

From childhood, the young of both sexes receive sacred education, initiatory, whose opening is marked by celtic baptism, they receive when they are seven years old. Boys and girls immerse themselves in the sacred pool that could be find in any village. 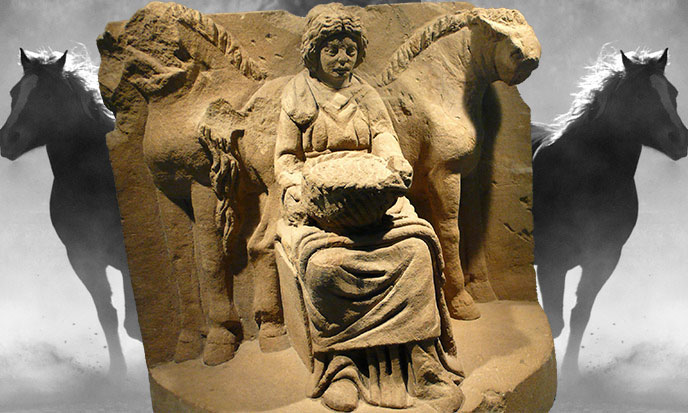 It is often a bubbling spring with miraculous virtues. We find some of these basins around the blessed springs flowing near Brittany or Vendee chapels. Then comes the difficult age of the oral study, singing, learning verses, practising the art of healing, at least for those of you who intend to become a druid.

The different degrees of druidic initiation happen every 7 years in the life of a human being. The first, at the age of 7, was taken up among the Catholics in the form of private communion. In medieval chivalry, at this age, the boy left the company of the women to become the page of the knight his father. Nowadays, it is said that 7 is the age of reason. The second initiation takes place at 14. It has become the renewal of the vows of baptism, or solemn communion. In the Middle Ages, it was the age when the page became squire. At 21, the squire became a knight in his turn. It was when I was young the legal age of majority. It has since been brought back to 18, which is a mistake in my opinion, which disrupts the seven-yearly biorhythm. Similarly, the presidential quinquennium is an absurdity that Charles de Gaulle would have despised. The previous septennat was far superior in all respects. There followed three other sacred initiations at 28, 35 and 42 years. The latter consecrates spiritual maturity. Celtic tradition considers that after this initiation, all the personalities of the being are mature and complete. I don’t know any better point of view, nor wiser.

In the Middle Ages chivalrous, these initiations are addressed to men. What about women? In the old religion of the Druids, are they set aside? Women are admitted to the Druidic function, for the reason that they get the most powerful magic: their matrix gives them powers and horizons that males would never reach. Their special status of Masters of Magic by the matrix path put them in a position which has not always been understood: “The witches and female prophets were affiliated to the order of Druids, but without sharing their prerogatives. Their duty imposed bizarre and contradictory laws: somewhere the priestess could reveal the future only to man who had raped her ;  elsewhere she vowed to perpetual virginity ; elsewhere, though married, she was forced to live as a bachelor. Sometimes these women were to attend nightly sacrifices, naked, black dyed body, messy hair, flapping in frantic transport. Most lived in wild reefs, amid storms of Armorican archipelago. In SenaIsland of Sein was famous oracle of the nine terrible virgins called Senes by the name of their island. To have the right to consult, you might be a sailor and still have made the trip for this purpose only. These virgins knew the future ; they cured the incurable evils ; they were launching storms”(source)Jules Michelet, Histoire de France

The description turns grotesque, yet it is based on real facts. Jules Michelet (1798-1874) has no idea of kundalini, of chakras, of the awakening process, of the rules of courtly love, of the sexualis magia or sexual magic, of the key role of the matrix and the feminine energy to healing, charming, awakening the applicant. Terrible, these virgins are by their power. They know how to calm the furious winds or launch them to your boat and sink you down. They belong to another world, without knowing whether it is the world Gwenwed, world of white light ; or the world of Ankou, sinister underworld of death. If Druidism affirms the existence of three worlds accessible to humans, he honors the gods and goddesses in large numbers.

The Celtic pantheon presents “some analogy with the Olympus of the Greeks and Romans. God Tarann, spirit of thunder, is also the god of the sky, the engine and the arbiter of the world. The sun, under the name of Bel or Belen, gave birth to healthy plants and presided over medicine. Heus or Hesus, the war. Teutates or Teutatis, trade and industry. Even eloquence and poetry had their symbol, Ogmius, like Hercules armed with mace and bow, and leading after him men attached in chains of gold and amber that came from his mouth”(source)Jules Michelet, Histoire de France

“The Druids, ministers of a bloodthirsty and only custodians of all science worship, long ruled by the word of their holders were supreme and terror . Approximately three centuries before our era, tribal leaders and nobles broke at . frightful convulsions environment, the yoke of the priestly caste But the military aristocracy , after his victory, found two enemies : some of his more skilled or more brave , united several tribes and made themselves kings. On other points, the lower classes, especially city dwellers, rose. Druids united rebel against the nobles who had dispossessed, and in most cities and royal aristocratic government was abolished and replaced by a democratic government more or less mixed with old elements. Thus, in a city, it was the elders and priests who constituted senate appointed a vergobret or annual judge, and need a warlord. In another, the people instituted a king who remained in  the dependence of the priests. Also a former he said that the kings of Gaul , their golden seats, amidst all their magnificence pumps were only the ministers and servants of their priests.”(source)Thierry Bordas, La mythologie des Celtes et des Vikings, traduction Xavier Séguin

This more contemporary reading of Druidry stresses the cruel and bloody appearance of human sacrifices practiced by the druids. I do not share this view, as it was that of Julius Caesar, who sought to discredit this great people to justify its military conquests. He did the same thing with Cleopatra. For the same reason, one cannot believe Cortes or Pizarro when they grossly amplified these human sacrifices of the Aztecs or Incas him. Conquistadores and tried to justify the barbarity of their own massacres. Julius Caesar did the same and he is the only source of information about Gauls. (source)Julius Caesar, De Bello Gallico

It is true however that the Druids, and later the bishops have held more power supplies that kings who were actually under them. Thus the rivalry of the Order of the Temple and of Philip the Fair, King of France, much less rich and less powerful than the great master of the order. After the introduction of the Roman pantheon, the Gallo-Roman Gauls eventually mix their gods with those of the invader. But the old religion has not disappeared. Druids continued to reign almost unchallenged on rural populations until the French revolution. These shade-druids did not practice human sacrifice, they did not celebrate Black Mass, they did not rape child. They were healers, spiritual teachers, awakeners, and often, alchemists.

Hounded by the Inquisition, threatened to be burnt at the stake, they learned to hide behind the beautiful language of goslings -wrongly called language of the birds- which is the green tongue of children of Mother Goose – all Goslings in the medieval Tour de France and the pilgrimage to Compostela.