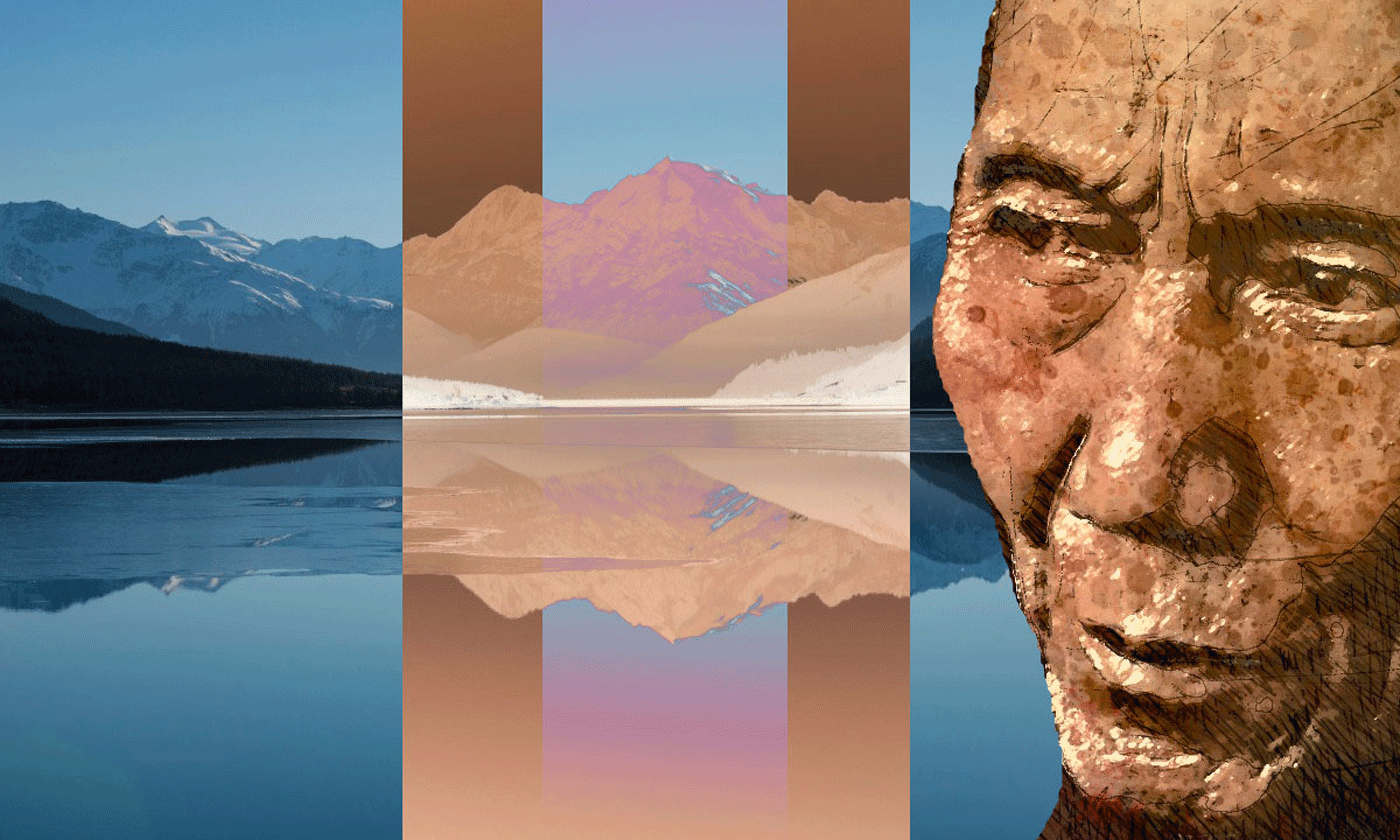 The second paradise of Hinduism is in fact the first: it is that of Brahma, the immense being. Brahma is the god of the Hindu gods. It has nothing of Jupiter Zeus, it has everything of the unique god as it is conceived in the West. Except that he is surrounded by 30,000 friends, all gods like him. It must be warm to his heart.

As far as Hinduism is concerned, I have already touched on the subject of the famous northern mountain center of the world, in Shiva’s paradise. I would like to go deeper into the subject of paradise where the great gods live, this earth near the Sun, or on the Sun, as it is evoked in the main planetary traditions. The ancient Greeks called it Hyperborea. In Hinduism, there is another heavenly paradise, hardly different from Shiva’s Kailash, it is Mount Meru of Brahma.

“Buddhists and Hindus tend to identify the Meru at Kailash, a Himalayan peak 6714 m high, for whom Kailash is the most sacred mountain on earth: it symbolizes the axis of the world. the Ramayana is where the Hanuman monkey would have gathered the medicinal herb to make life in Rama, but this mountain should never be climbed, and so far no mountaineer has never climbed.” (source)

It was true, it is not anymore. An incredible documentary retraces the epic of three totally untied climbers … from rope as from tradition!

India’s traditional beliefs about Mount Meru are in all respects comparable to those of all other peoples. Authors such as the French indianist Alain Daniélou have made synchretism works by showing the close and numerous parallels between Shiva and Dionysus, but also between Hinduism and other beliefs, all of which draw on the same source, that of a historical truth that I strive to restore. It still glitters weakly under the heaps of deceptive slag, resulting from ignorance and the desire to distort our origins.

“In Indian cosmology, Mount Meru is the axis and pivot of the earth, around which the stars revolve, and above it shines the polar star. The other name of the Meru is Jayadhara, ie “Jaya support”, the sun. Always this analogy between the land of the gods in the sky, and the solar star. The reason is simple: this fabulous mountain is crowned by Jambu, an immense tree.” (source) Looks like Yggdrasil, the giant Ash, the axis of the World according to the Scandinavian tradition, is recognized there, as well as the Tree of Life. from Genesis, which grows in the center of Paradise, or Garden of Eden. 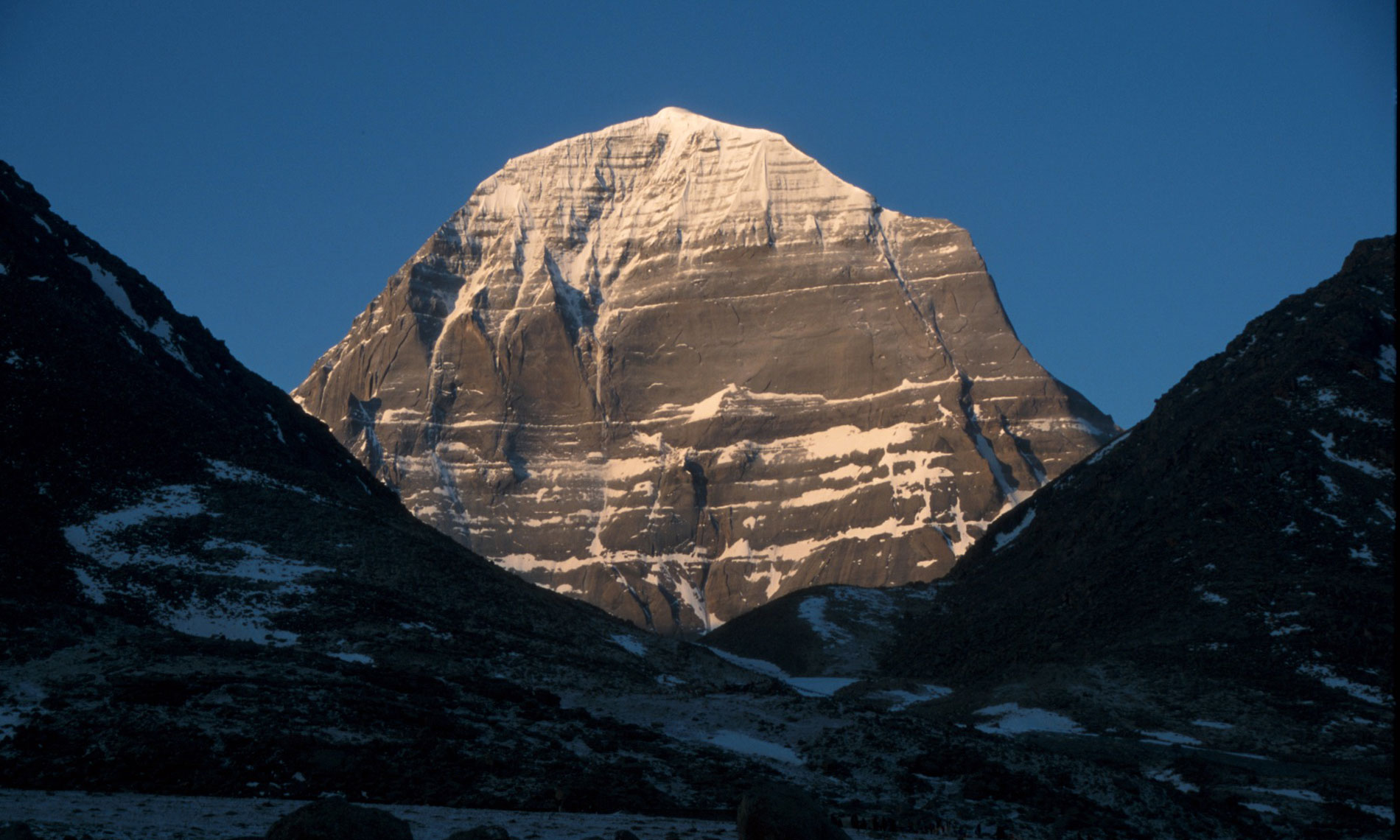 Hindus and Buddhists, however, wanted to relocate the axis of the world, so that it is found at home in the Himalayas. So Mount Kailash is considered sacred in India and Tibet, as a representation of the mythical Mount Meru, located in the center of the world and held for the residence of the gods.

“The Ganges falls from heaven to subdivide into four rivers in the four directions. Its slopes are golden in the east, silver in the west, crystal in the south-east and agate in the north-west. On its slopes are the main residence of the 33 Gods and their king Indra, god of the sky. The Svarga (“Sky-of-Light”), paradise of Indra is also there and Brahma reigns at the top, in his city of Brahma-puri.” (source) The Meru is the Hindu equivalent of Mount Olympus of the ancients Greeks, it also recalls the description of the earthly paradise in the Bible, with the four rivers flowing from the summit of the great mountain, the axis of the world and the highest point of paradise. 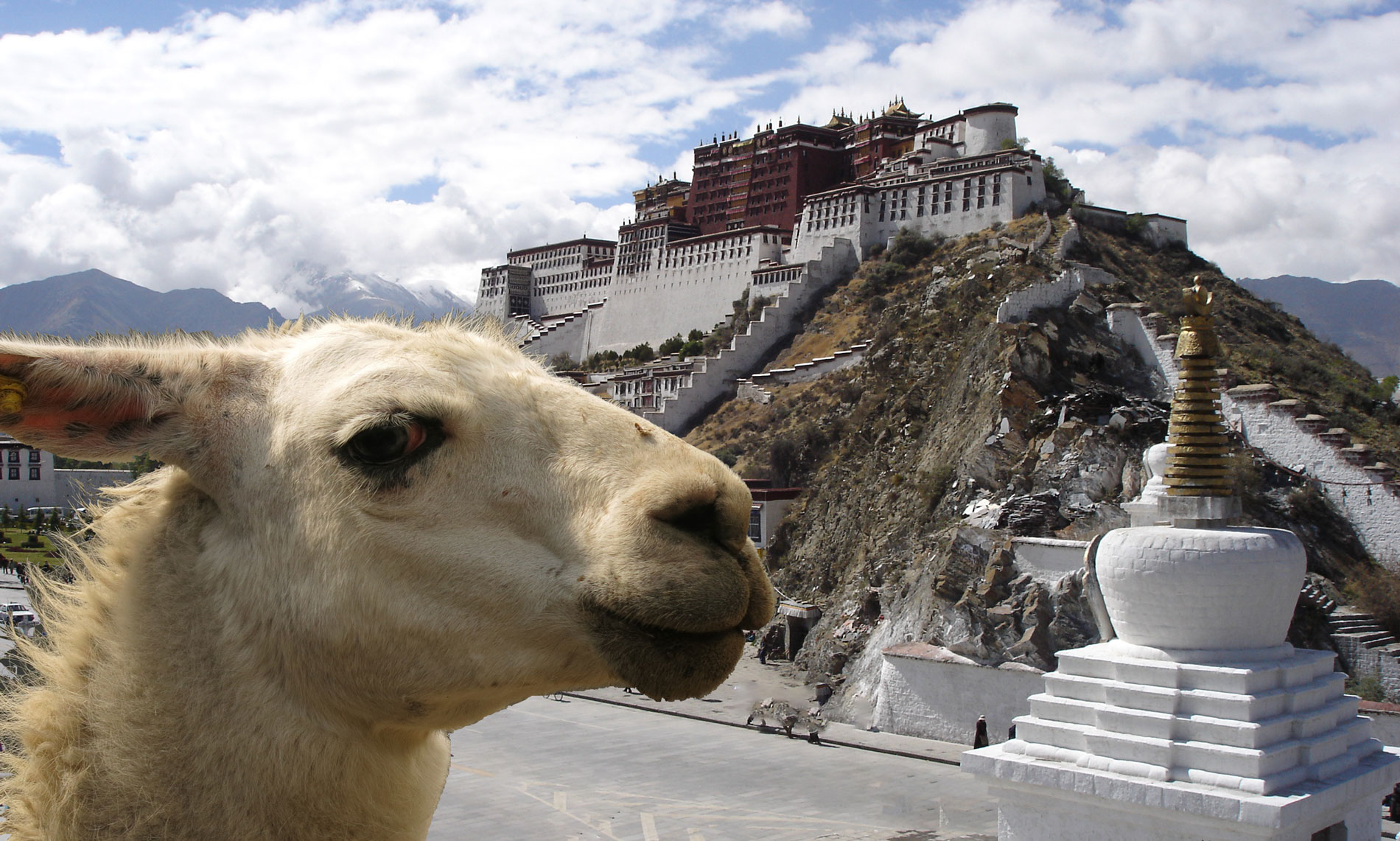 “Formerly, the Hindus located in the same place a country called” Uttara-Kuru “(” Northern Kuru “). This mythical and impregnable country seems to correspond to the country of” Attacores “mentioned by Pliny, and to the country of” Ottorokores “mentioned by Ptolemy It was said that it was a democracy, and that women were free there, others even thought it was inhabited by the Devas (gods) Some texts also seem to confuse Uttara-Kuru with the country where would the Aryas come from when they invaded India?”  (source)

Uttara-Kuru is mythical, because it does not belong to the earth, it is the land that belongs to it. It is impregnable, because out of reach of humans, guarded by angels, fearsome flying warriors. It is inhabited by the gods, which are not immaterial principles as we imagine them today, but superhuman extraterrestrials whose power and technology crushed the meager resources and faint light of our distant ancestors … as they still surpass ours!

For Buddhism, the image of Mount Meru as the Center of the World is taken up in the building of temples, terrestrial replicas of the cosmic mountain. All these sacred constructions symbolically represent the entire universe: floors or terraces are identified with “heavens” or cosmic levels. By climbing them, the pilgrim approaches the Center of the World and, on the upper terrace, he enters the “pure sphere”.  (source)  Is the pure sphere this great dome of crystal that caps Hyperborea and / or Atlantis? On this account, we must renounce the symbolism to enter the description of a reality unthinkable today: this great spaceship, suspended above our heads like a Christmas ball? A big transparent ball that we almost expect to see turn to rain the snow on the roof of the world of the gods.

“Among the ancient Zoroastrian Persians, a mountain similar to the Meru was also known, called Haraiti (Guardian) or Hara Berezaita (High Protection) and its summit was Mount Hukairya / Hokar (Bountiful). Its base was in the Airyanem Vaejah, the home country of the Aryans, in the center of the seven countries created by the god Ahura-Mazda, it was the polar axis and the pivot of the world, and it was said that the Sun and the moon revolved around her, and on her summit lived the Yazata Mithra / Mehr and were the souls of the dead.

The Mandaeans will call this mount the “White Mountain of Syr” / “Mountain of Light”. They say that this is where Anosh-Uthra (Enoch) initiated John the Baptist. This mountain would be at the North Pole.” (source)

John the Baptist, who walks before the Son of Man? A contemporary of Jesus initiated by Enoch? Wait. This biblical patriarch would have lived 2000 years before him. I knew that the patriarchs lived several hundred years, like the son of Enoch, Methuselah, and like his grand-grandson Noah. But this happened 2000 years ago. Twenty centuries is old, even for a patriarch. Unless ?… 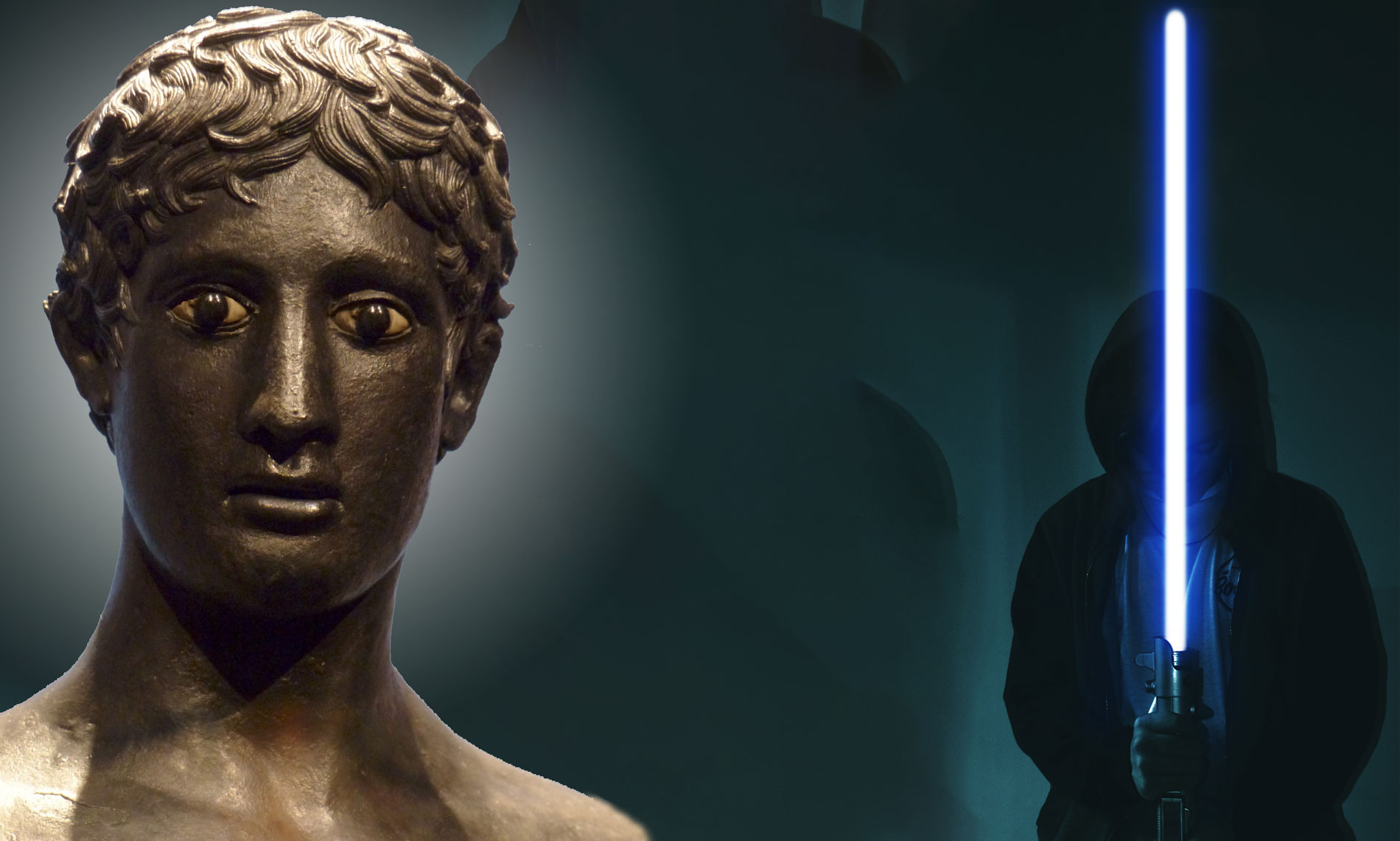