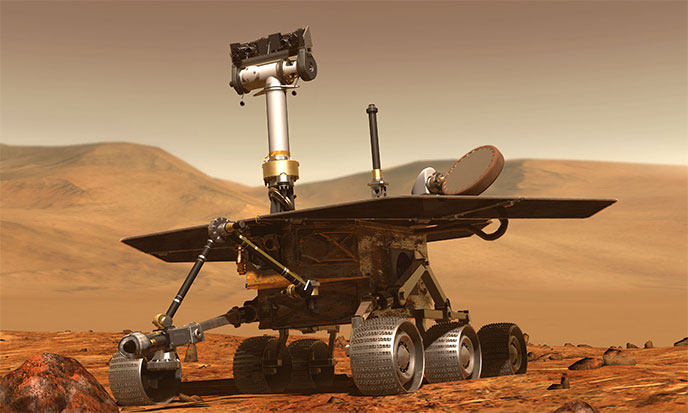 In 2011 David Martines first spotted life on Mars. At the time, NASA scientists laughed out loud and Martines was labelled ignorant. Read the whole story:

American armchair astronomer David Martines claims he has found evidence of, well, something strange on Mars. David Martines’ YouTube video is heading for viral status after he uploaded a flyby of Google Earth’s Mars explorer zooming in on a white, cylindrical shaped object.

The object, according to Mr Martines, is “about 700 feet long and 150 feet wide”. He’s calling it “Bio Station Alpha, because I’m just assuming that something lives in it or has lived in it. It’s very unusual in that it’s quite large, it’s over 700 feet long and 150 feet wide, it looks like it’s a cylinder or made up of cylinders,” he says. “It could be a power station or it could be a biological containment or it could be a futuristic garageThe airtight garage of Jerry Cornelius, for sure – hope it’s not a weapon.”

“Whoever put it up there had a purpose I’m sure. I couldn’t imagine what the purpose was. I couldn’t imagine why anybody would want to live on Mars.” But who’s responsible? Mr Marines says it’s unlikely to be NASA. “I don’t know if they could pull off such a project without all the people seeing all the material going up there,” he says. “I sort of doubt NASA has anything to do with this. I don’t know if NASA even knows about this.” Hmm. Please do not take them for green horns, Mr. Martin.

The men in black of NASA know many things, understand more, but deny all. It’s a habit. Anyway Mr. Martin did not intend to stop there. Is it one of the lucky beneficiaries of fifteen minutes of fame that Andy Warhol promised to everyone? Will he go back to oblivion as quickly as he popped out? Meanwhile, he asked any help to find an image of higher resolution, if it exists. He  gave the coordinates of the Bio Station Alpha: 71 49’19 .73 “N 29 33’06 .53 ” W. If you loaded the software Google Earth you can see.

Mr Martines is seeking help finding a higher resolution image, if it exists. He claims the coordinates of Bio Station Alpha are 71 49’19.73″N 29 33’06.53″W and that anyone who has downloaded the Google Earth software can see it. Of course, skeptics are lining up to shoot down the theory of Mr. Martines. They evoke all the tall stories that could emerge in the past about this fascinating neighbor, Mars the red planet. In the sixties, we talkaed about little green men in their flying saucers.

The word extraterrestrial did not exist. We said Martian instead. We thought very seriously that there were canals on Mars with circulating water. In short, video parodies of the Bio Station on Mars have already appeared on YouTube…

Some are very lol, starting with the Ski Beta Station… And then this morning, there was a new scoop: one NASA specialist said that there was never any Bio Station nor white cylinders on Mars. Astronomers knew it from the beginning: the alleged artifact is only a reflection of sunlight. Or rather light interference due to cosmic rays… Or the DNA of DSK, as we’re at it? It’s amazing the nerve of these morons who always spin the same yarns.

Skeptics applaud the scientists who, once again, have just reduced to nothing the shared dream of Mr. Martines. They also refer, more recently, to the mass hysteria around the infamous “Face on Mars”. And they’re right. This is exactly the same case, that the credible and pretentious scientists tried to smother with a brilliance worthy of Laurel and Hardy. Where does it come from, this annoying tendency of scientists to take all the others for morons?

After a few weeks of delirium, the famous face proved to be the effect of an oblique light on a rock formation. Decidedly light plays tricks on us! This case contains troubling elements. An excellent record of French magazine Top Secret showed that all the images of the “Face” area would have remained hostage to NASA for several weeks. Why? To make alterations? It is so easy to fake documents when controlling sources of information. Meanwhile, video parody of the Bio Station in March has already appeared on YouTube, beginning with the Ski Station Beta…

With this photo released long after the first, NASA wanted to prove the innocence of amateur astronomers.

I am afraid that all these pictures-hidden-in-pictures reveal, in the last analysis, only our thirst for marvellous. And so much the better. Why not to demand the right to poetry, to fanciness, to unbridled imagination? See where this civilisation lead us, leaning on logic, figures and money. And if I want to see a soft profile in this cloud, a butterfly in this stain of ink, I will follow my dream at all costs. Until it becomes reality. And that’s how the world changes. Not in another way.