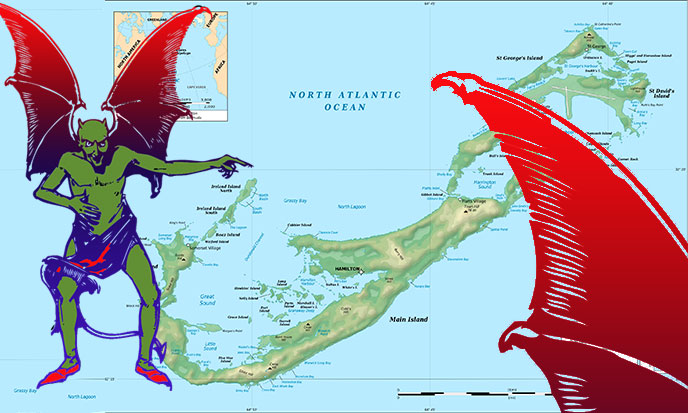 From the end of World War II, in an area between Bermuda, Puerto Rico and Florida, several disappearances of planes and ships drew attention on what would soon be called the Bermuda Triangle.

The name “Bermuda Triangle” is due to the journalist Vincent Gaddis.

In 1964, he described an area of 75,000 square miles, in the Atlantic Ocean, near the Tropic of Cancer, in which occurred unexplained disappearances of planes and ships. Long before being baptized, that damn triangle had already claimed victims. The first drama inside the triangle occurred in March 1918 when a U.S. ship, the USS Cyclops, disappeared with all hands, ie 306 passengers and crew.

But the world was at war. The U.S. Navy suspected that the ship had been torpedoed, the U.S. mourned for their victims and things stayed like that.

The legend will start only after the next war, on December 5th, 1945, when five Navy Grumman Avengers took off from Fort Lauderdale in Florida for a routine flight with 14 crew members. The mission being completed, the planes headed for the base. The radio transmission reported strange phenomena during the return flight, then radio contact was lost. It was 5:35 p.m., the five Avengers were flying over the Bermuda Triangle. They will never reach Fort Lauderdale. The wrecks of the planes will not be found. “Disappearance for unknown reason” will say the U.S. Navy. And the triangle continued to make victims.

Other disappearances occurred there in 1948, 1949, and 1951. On October 5th, 1954, a U.S. Navy ship called Super Constellation vanished with its 52 passengers: no trace of a possible shipwreck. In 30 years, in this area, over a hundred aircrafts and ships have vanished, over a thousand human lives have been lost, no one body or one wreckage have ever been found.

If Americans keep silent on this, their former adversaries of the Cold War are more talkative. The Russian archives of the Soviet period have recently been declassified.

A lot of mysterious events took place in the Bermuda Triangle region, remembers the retired rear admiral Yury Beketov. The instruments go wrong for no apparent reason or detect strong interference. This could be voluntary disruptions made by UFOs, according to a hypothesis proposed by the former officer.

“On several occasions could be observed on the instruments objects moving at incredible speed. Speeds around 230 knots or 250 mph, according to calculations. To navigate so quickly is a challenge, even at the surface. The resistance of water is much too great,” said Beketov. “It was as if the objects were defying the laws of physics. There is only one explanation: the creatures who have built them far surpass us“ explained the former officer.

Are they UFOs of this type, discovered at the bottom of the Baltic Sea ?

“The oceans UFOs often show where our fleets or those of NATO concentrate,” observes for his part the veteran of the Naval Information Igor Barclay.

“Near the Bahamas, Bermuda, Puerto Rico. They are seen more often in the deepest area of the Atlantic Ocean, in the southern part of the Bermuda Triangle, and also in the Caribbean Sea,” he claims.

Two translucent pyramids (glass? crystal? plastic?) has been spotted a decade ago around 2000m deep down the Atlantic Ocean in the Bermuda Triangle.

It was not believed at the time, some said it was a fake, and the affair was forgotten. Now a new report attests to the presence of these pyramids, both slightly fluorescent. Do they still have some activity, disturbed by the centuries, which could explain the numerous accidents and disappearances in the area?

“These strange glass structures were discovered at two thousand meters deep, into the very strange Bermuda Triangle, and were identified using sonar, according to oceanographer Dr. Meyer Verlag.

Studies of other devices have allowed scientists to determine that the two giant pyramids are apparently thick glass. Both structures are really impressive, each of which is larger than the pyramid of Cheops in Egypt! B. Meyer believes this discovery may finally shed light on the secrets of the Bermuda Triangle, that is to say, the many mysterious disappearances associated with it.

In his press conference in the Bahamas, the scientist gave a report with the exact coordinates of the pyramids, as well as maps and a photo …! (Above). In addition, the oceanographer said the technology is unknown to modern science.
Perhaps a more detailed study will give us results that are difficult to imagine. ” (souce)

Another Deadly Sea in Japan

In any case, this feature is not unique. The triangle is intersected by the meridian 78 ° west, the longitude where true north and magnetic north coincide.

On the other side of the Earth, its anti-meridian is 101 degrees east, along which magnetic north and true north also merge. Surprising singularity, especially as some authors have argued that this meridian runs through the middle of Devil’s Sea, near Japan.

The Sea of the Devil is the Japanese equivalent of the Bermuda Triangle:

hundreds of ships and planes have disappeared there in the same way.