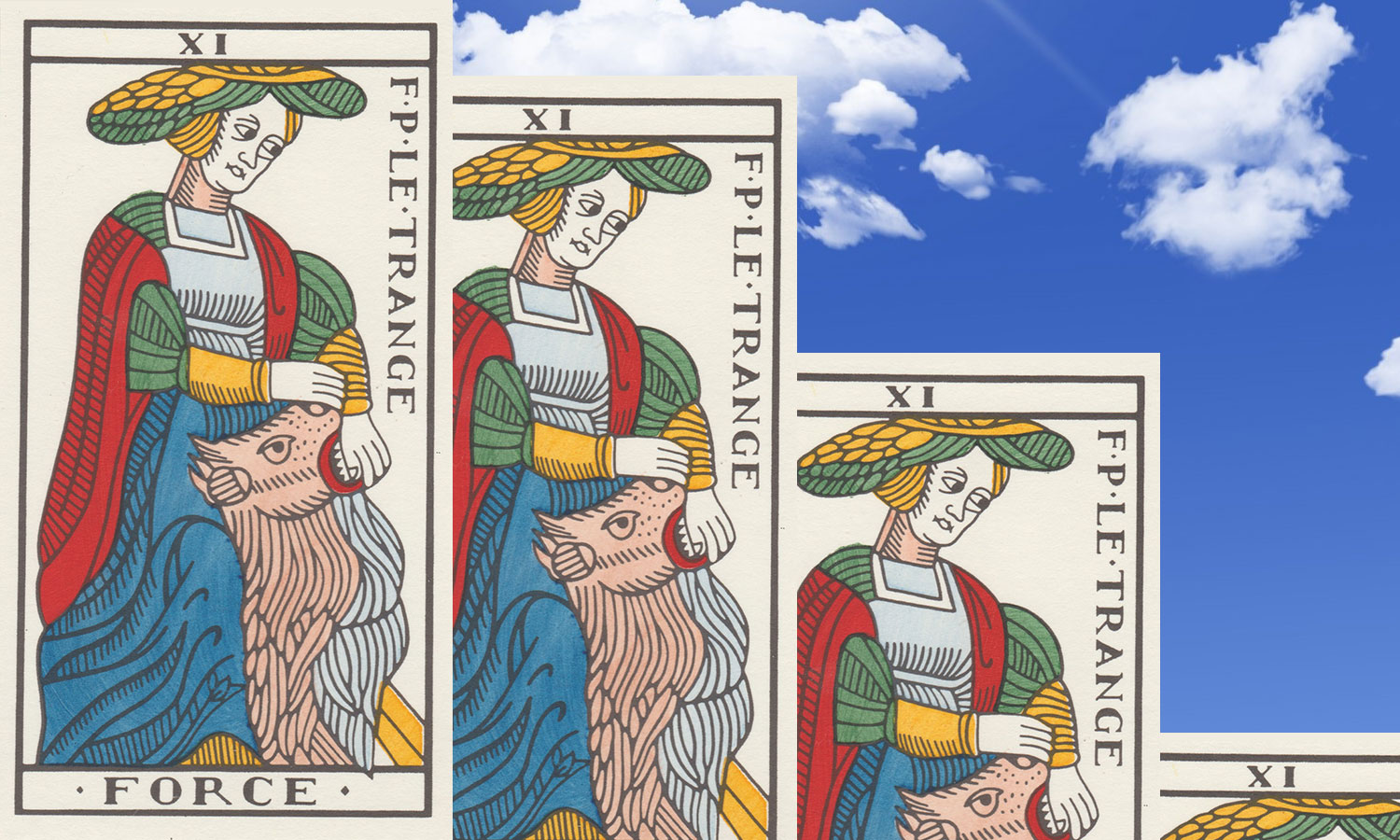 The Arcane XI Strength represents the summit, the climax of our material adventure. It is the accomplishment of earthly chivalry. With the next arcane, XII The Hanged Man, will start the celestial chivalry. There are many who spend their whole lives in Strength, solely concerned with material things. When the age of retirement comes, they suddenly fall into The Hanged Man, and it kills them.

XI Strength, this once triumphal arcane is no longer what it was, as we will see. It is scrambled. Jean-Claude Flornoy had the chance to live each arcane in the right order, with a beginning and an end that he could date without problem. His case is exceptional. Most people are a lot rougher. Some can jump an arcane and come back later for a review. Others, like me, peck left and right, make an arcane chunk, then move on to the next, then go back, therefore it is much more difficult, if not impossible, to date each arcane with the same precision. That’s what happened to me for this arcane XI Strength.

The Force and the West

It is still the dominant arcane in the West as in China, among others. In all places where money and its pleasures play a major role. Strength brings control of money, which is the blood of our society. Just like blood, everyone on a different plane, money is a very special fluid. Societies are living beings, they also go through the stages of life described by the major mysteries of the initiatory tarot. Western society, which has remained several centuries in Strength, finally switches to The Hanged Man. Celestial chivalry is at hand. It will make a big change in mentalities. But it may take a few more decades. Be patient!

Yes, patience. But the impatient ones are numerous. I see many young people who are not at all interested in Strength, they prefer to jump over with their feet together. After The Wheel of Fortune they land directly at The Hanged Man. In fact, they have always been there. Money has never interested them, they opt for the inner life, preferring to be in having it, mind to matter. These young people are living the world of money as something foreign, useless and bad. I can understand them.

Unfortunately, our world today is still subject to the rules of money, work to win, spend, give, save, speculate, receive, buy, sell … Money is not a bad thing in itself, nor a good. Everything depends on the use that is made of it.

One must have to act, and not act to have. All that is received by the gift is worth more than anything that is bought. The money you are given is sanctified by the donor’s generosity, or gratitude. The right attitude towards money requires treasures of balance and delicacy. The money of a gangster or a negative person will never do anything good. But an initiate’s money can perform miracles. 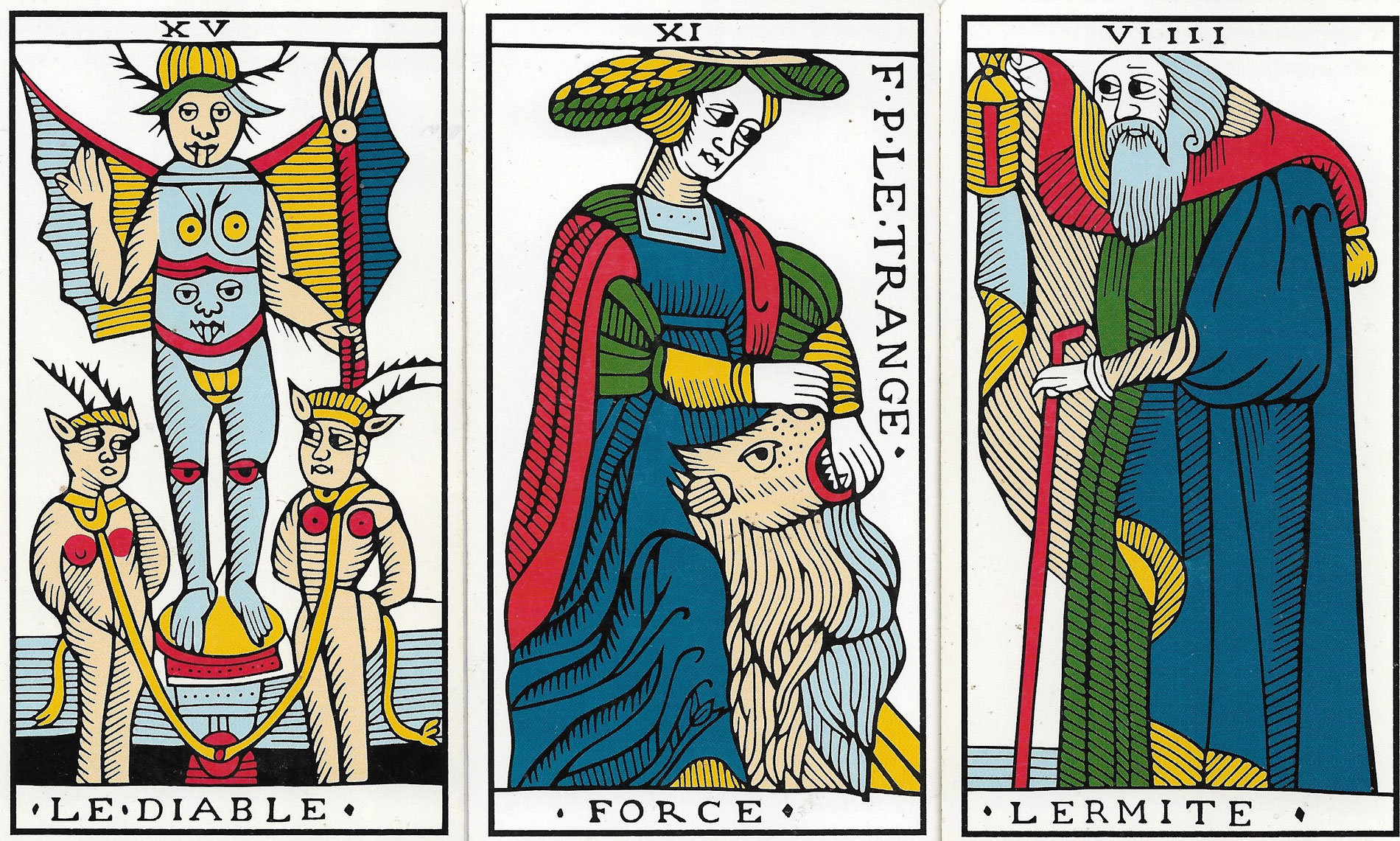 I am, apparently, awake from birth, judging by my crystal aura. At least that’s what a great seer tells me of my friends. But do not conclude that I have always had the behavior of a MAT. The numberless arcane remains an achievement for me as for anyone. And the road is still long, at least I feel it. My special status made me live snatches of arcana, in disorder most often, without my attaching importance. When I was young, I had fun making money because of my angelic countenance and charming smile. Well, that was Strength already. I lived in kit, this arcane. In spare parts without installation instructions. Much less easy to assemble than Ikea furniture. Though…

I had passages where the money flowed directly into my pockets. I did not care, I thought it was normal, and I spent it as easily as he came. I also had periods where nothing smiled on me, especially since I was in The Hanged Man. I made the mistake of asking something to the Living without having weighed the pros and cons. Pay attention to what you ask of the Living One, because he might give it to you, says the proverb. One day, I got tired of the insolent luck that made me pick up thune under the hoof of a horse. So I made this request: “Let the luck that I have had so far for the money and the material realm go back to enlightenment and the spiritual.“

No problem. The Living gave me exactly what I asked. From that day, I found myself in the street, I slept under bridges, or almost. I lived on nothing three times. While on the spiritual level, my progress was spectacular, on the material level the needle of the sorrel counter remained blocked on the zero. Pay attention to what you ask the Living, he might give it to you. The warrior does not pronounce wishes lightly. He does not play to who-loses-wins. When I told him this anecdote, my benefactor was well fucked my mouth.
– Oh, stupid! he quipped. You could very well ask for spiritual luck without giving up your material gift! One does not prevent the other ! Where did you see that?

He is too right. I am too stupid. Too pure. A pure moron. So I learned at my expense that we do not trade with the Living. It was another La Force behavior that I had there. Instead of behaving like The Hanged Man that I had become. I continued my way without money, without friends, without shelter, but with a heart full of love. Needless to say, I won serious! The catharsis of the arcane XIII propelled me to the circle of white light, the Gwenwed of the Celts, the white world of the awakening. But later, landing in the arcane XVI The Tower, I went back to XI Strength, while already beginning the arcane XVII The Star. What a mess!

As I replayed the film of my life – of my lives – I could never have understood the path of the tarot. I followed it in a spiral, and not in a straight line. Now again, I consider that Flornoy’s version is too linear, nothing is so simple. That’s why I wanted to return to the major mysteries that I lived, just to unravel those who spiral like me. And they are legion. For them like me, the future will be under the sign of the gift. Gift of self, gift of money, gift of working time, mutual help, etc. This, in my opinion, is the future of Strength. But we are not there yet.

Barter and gift are spreading, yes. Generosity is a recipe, undoubtedly. It is none the less true that Strength is an arcane that one can not jump or neglect with impunity. As long as we live in a physical, organic, mortal body, we will be subject to the arcane of material power. We will have to control the lion, open his mouth forcibly, like the lady of the arcana under her infinity hat.

Who wants to make the angel makes the beast. We are not angels, but humans. Even though many young and old believe they already live in a paradise without money, these times are not accomplished. They may come, it’s all the harm I wish you. But for the moment, you must pay, must you spit, not possible that you escape. So what has become Strength in a world that does not care? A faded, distorted version of what she has remained in the world who believes in her. That’s why I titled this article Weak Strength. It is in a bad way … But it still keeps us in its hooks. 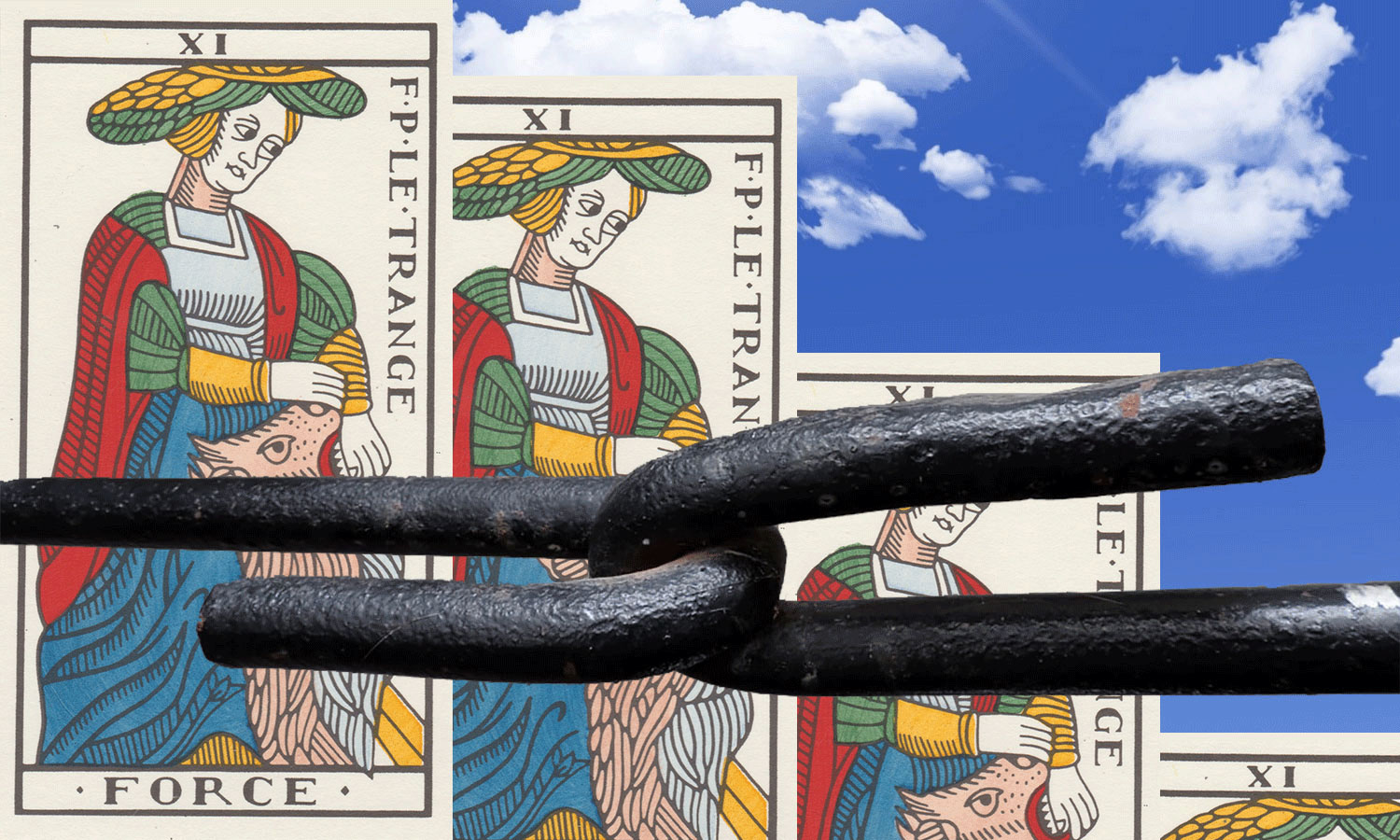