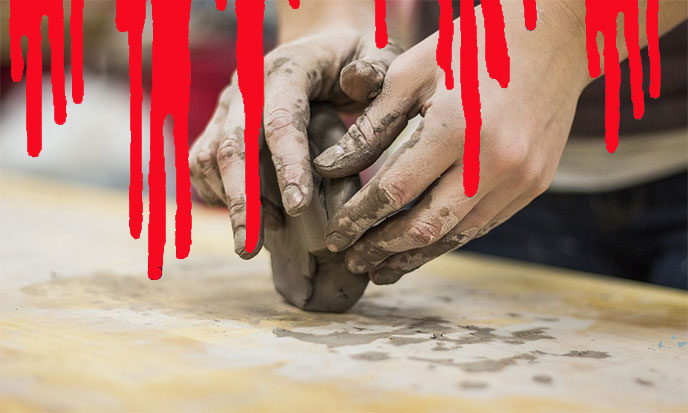 If you believe in Rudolf Steiner, the clay is to the Earth what blood plasma is to our body: a vital fluid of a very special nature.

Austrian thinker Rudolf Steiner (1861-1925) founded the Anthroposophical Society: beyond the purely technical, materialistic and destructive side of modern science, aiming to educate and heal, to harmonize physical and spiritual being by developing the “gift of the heart,” only force capable of balancing the opposites. The devil of a man was right, more than supposed. Like a maelstrom, the vicious circle of the material precipitates people in the petrifying depths of kaliyuga.

The super rich have become accustomed to change their blood as an elixir of youth. What they do not realize, blood is a spiritual fluid: it contains the key to be who we are. Each of us has his mystery engrammed subtly in his blood such an impression in the flour. Change the blood, you block access to interiority. Your blood is your life. The vampire myth has its origins in this spiritual evidence.“If you love me, you drink my blood,” said Jesus. We did.

“Do this in memory of me,” he added. We did too. Then came three movie makers who saw things behind things. They were called Murnau, Browning, Dreyer. Their movies are Nosferatu, Dracula, Vampyr. The myth has taken root, no surprise, people already mimed at mass every Sunday. As always, we took the finger for the moon. It was believed in Vice of vampires, it was not always believed in the virtue of blood. “Blood is a very special fluid,” says Steiner. Treat it like any liquid and you’ll be surprise.

The blood is specific and strictly individual: the blood group is only one – the rudest – of countless parameters that make really a blood identity card, and much more. But when you have forgotten the sacred science, you stick to the square science kidding  and mutilating us a little more each day. Prisoners of the materialist conception of blood, people have less and less opportunity to contact their soul.

Separate from nature, their inner god becomes diaphanous, evanescent, when it does not simply disappear. This is just one example among thousands of what happens when one does not believe in mental life, when one mutilates human nature making it only a mechanistic animal-machine structure. Men of materialistic power swimming in their gold pools have interest in making us believe that we are only machines. So they have been using us for millennia. That’s why I preach enlightenment.

If you let someone control your destiny, this is the end. (Jean-Louis Aubert)

The parallel between the blood as a sacred fluid and the clay as the blood of earth is quite a fertile one.Pardon the joke It is true that clay, in horticulture, plays the part of earth plasma. Horticulturists use clay as an anti-rejection paste to make a plant graft or transplant, as well as a catalyst for rooting a cutting. Besides clay has other qualities to convey information. The clay tablets of Senacherib and Assurbanipal are a perfect example.

There are many uses of clay – all more or less linked with shape design and/or information. Just like blood … Clay is used in many magical rituals, dances and sacred trance at all latitudes. Argillaceous mud baths are excellent for healing, drainage and removal of impurities from the skin. Queen of Egypt Cleopatra already used it for this purpose. I could also mention the flood clay layer  which extended under the ruins of Ur when Wooley made excavations. Or the clay which God shaped Adam with.

Many legends report a god who fashions the first man in the clay. Most of these legends state that the clay alone is not enough, there also needs the blood of a god. In the Sumerian cosmogony, Marduk sacrifices and gives blood for the birth of humanity.

“Clay kneaded with the blood used to model the first men . Ouranos by Kronos is sacrificed and its blood out the Giants , the Furies, but also the beautiful Aphrodite” as the Romans called Venus. “Atum, the creator god of the Egyptians, shoots himself , without the aid of a woman, the first divine couple. This is the blood of the giant Ymir that leaves humanity by Scandinavians. Through the Holocaust of Gayomart in the Aryan mythology, was born the first human couple.