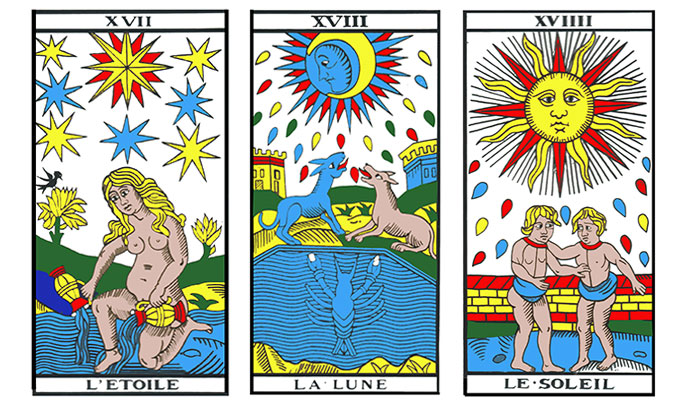 The Tarot of the Awakening groups the major arcana XII, XIII, and XIIII. After the first dive in the white light at the arcane XVI the Tower, the light path awaits our steps.

Enlightenment refers to that broadband connection with the Universal Energy.

This is just a driver’s license in the worlds of Spirit. The holder does not yet know how to drive, only the future practice will give him this control. But the cosmic connection is a unique delight.
By dint of trials and victories, the candidate to awakening put his suitcase down. Here is that white light has singed his hair, he knew the ineffable light, now he thinks he is Buddha.

Our candidate thinks he is awake: that is at that time that sleep awaits him. At this stage he does not yet know that enlightenment is not won once and for all. Nothing is ever granted to man…

“Enlightenment is not something one can say,about: it is this, or it is that. Impossible to say also: this one is awake, this other is not” (source)Lama Gelugpa Being awake is like driving at 186 mph: at first we simply do top speeds. This is how, House of God or not, the fontanel opens when it wants to. We are not connected full-time. You have to learn. “At twelve, I made my first outing of the body. That was in 1961, I was a teenager like any other, I was not taking any drugs or alcohol.

I had no idea of the awakening. During the Easter holidays in Britanny, I was gardening. Suddenly I felt the handle of my spade extending, stretching endlessly. I felt myself thrown into the sky. I was flying some ten yards above the garden. Speechless, I watched the green sea and the white sails. The colors were multiplied by an infinite prism. Balls of fire were rolling down the music of the spheres. Below, a strange man was digging his garden. That was me! While I was flying, my body continued to live without me, as if nothing had happened.” (Source)XS, unpublished 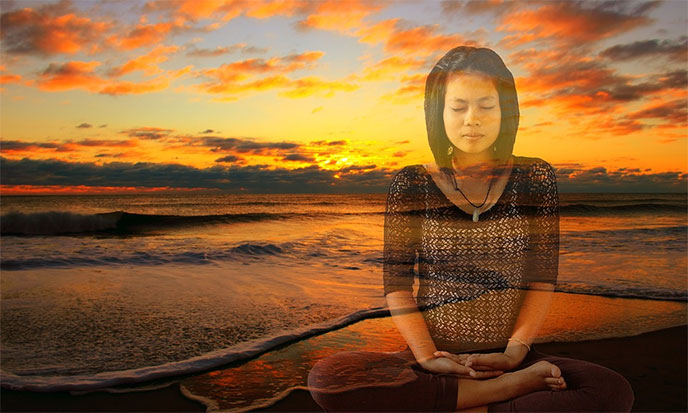 Still. The awakening is often intermittent, after the Tower, the being is over-boosted. Already during the Devil, you feel on top form. After the Tower, it is getting worse. Enthusiastic, you are starting your first sacred project: a piece of furniture, a house, a book, a movie, any invention, each one according to one’s talent, but still within the sacred realm of hollyness.

Once, in Arcanum XI the Strength, the traditional apprentice was to make his masterpiece, a beautiful object carried out professionnally . In the Arcanum XVII the Star, the same scenario is played on the higher plane.

What does the picture say? Under a psychedelic sky , filled with stars in white daylight, a woman pours water into a creek. What is she doing with her two pitchers? “She pours her water into the water of life.” (source)Jean-Claude Flornoy, on his website It is time to add his stone to the sacred building of the Living. Whatever this stone is, the Living will respect it.

The star has often been compared to the sign of Aquarius, the Age of Aquarius we are entering now. The woman on the image represents the true being, truth being expressed by nakedness.

She is unpretentious, she has nothing to hide, this “cleaning of the tonal” makes her worthy of her sacred task. Note that from the Devil, the subject on the arcana is always naked.

As the child who is just born, the awakening gives the being a purity, an innocence symbolized by nudity. 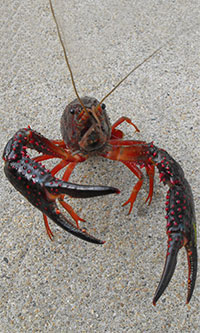 Then comes a long maturation phase, a dark tunnel where are awakening the echoes of black magic. It is the Arcanum XVIII the Moon, with its temptations of black power, “the dark side of the Force” as the Jedi said. Two flesh-coloured dogs howl at the black moon. Below, a blue basin shows a crayfish. Blue is the color of the unconscious. Crustaceans have a weakness, molting, which makes them very vulnerable. They must be hiding deep in a hole until their new shell hardens. This is precisely what happens when living this arcanum. You hide yourself in a hole and you howl at the moon every night.

Wait and see. Nothing great is built without patience and loneliness. Note the pearls in the claws of the crayfish, and three other pearls of the same color representing its eyes and mouth. Arranged in a triangle, these beads suggest the three main points of Freemasonry. The two pearls in the claws express the inability to fight during molting.

Impossible to fight when these pearls prohibit the use of claws. Molting itself is visible thanks to different colors of the shell.

The long magical gestation of the arcanum XVIII The Moon corresponds to an inner construction phase that results in physical languor and lack of intensity in everyday life.

The wise one takes his misfortune patiently, he bides his time. He cultivates his sense of timing, sharpens his personal powers, which will be very useful to him, sooner or later, when will come the next arcanum, XVIIII The Sun. 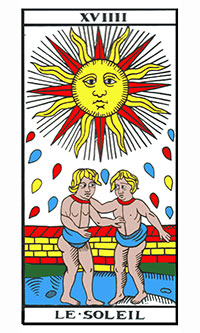 Irradiating a beautiful quality of energy, this Arcanum is very endearing. To express innocence, nudity is no longer enough: the image-maker has chosen to rejuvenate the subject.

And that is what is happening. Power, light and heat of the sun shine on the being and on his double. He recognizes himself in the other half of himself, he discovered the solar magic and the art of being invisible.

His aura shines on every people he meets. Many are those who come to him like moths that the flame attracts.

The temptation here is to think you are god. The god who stretches and takes possession of the subject’s body, of your self. But the subject remains subject. The king reigns, you obey.

Resist any immoderate passion for the arcane. It’s a trap: never play extra time. There is life after the sun!

When you’ll forget how to hope, I’ll teach you will.