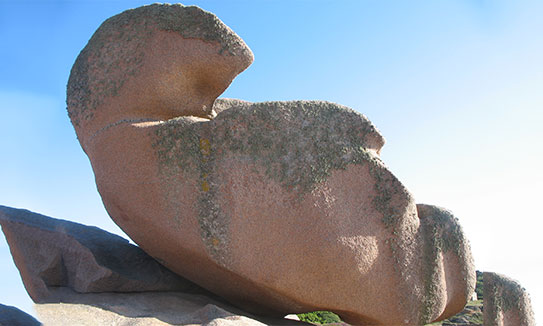 If the pink granite coastsee below also has its bestiary of stone, the Fontainebleau forest contains some very strange rocks with such forms you’d swear that nature had fun reproduce humans or animals, especially animals.

Robert Charroux drew some surprising conclusions: this bestiary stone would be the laboratory where nature has developed animal forms. With a bold personification, Charroux lends to nature a human behavior that discredits his too nice thesis. A touch of freshness in this raw and rude world. Without giving nature a sculptor gift, you can still ask whether these animal forms are really natural. Or if someone would not have helped nature a little.

Robert Charroux drew astonishing conclusions: this bestiary of stone would be the laboratory where nature has elaborated animal forms.

By a bold prosopopoeia, he attributes to nature a human, too human behavior which discredits his pretty thesis. A touch of freshness in this world of brute. Without going so far as to make nature a sculptor designer, one can still wonder if these animal forms are really natural. Or if someone would not have helped nature a little bit. 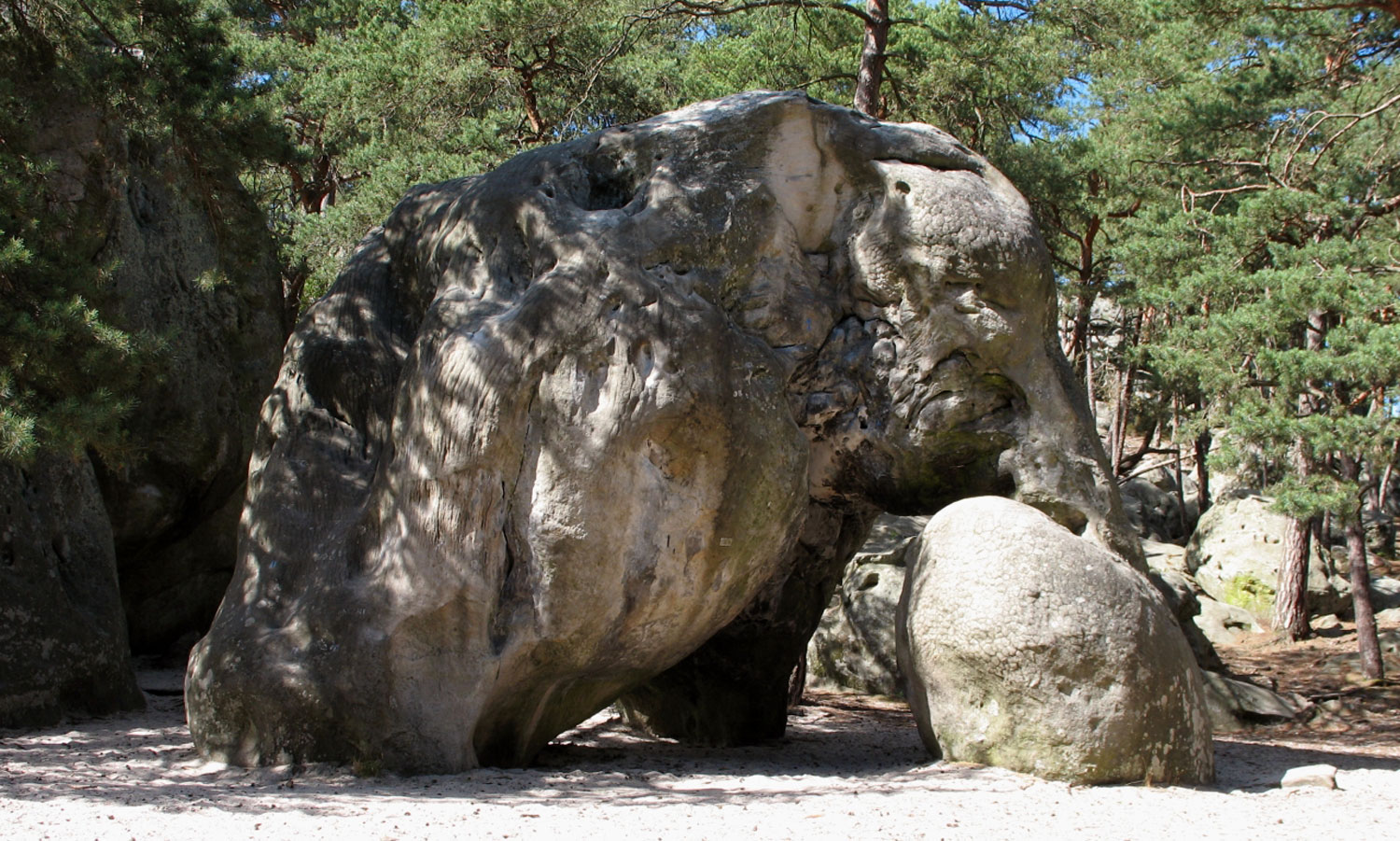 This someone, a giant lover of big stones all over the world, probably belonged to megalithic civilization. He did not sculpt all these rocks without help or tools. Rock fusion technology, such as these modern tunnel boring machines …

This civilization of the megaliths could bring us back on many chapters. Still it would be necessary to admit its existence. The traces she left us are trivialized, backdated or simply ignored, like these yet eloquent stones. This is an ancient stone working technique that respects the lines of the living. No dolmen, no menhirs are squared or polite. The raw aspect of the megaliths testifies to the profound respect for nature that animated their authors.

They were not artists, in the current sense of the word. Like negro art so badly named, these non-works are not art, they belong to the sacred, spiritual register, forbidden to laymen. Nature has a good back, really. In any case, for me, the case is clear: they are indeed artifacts, manufactured products. I chase the natural, will he come back at a gallop?

See below The Lovers Rock, Païolive Wood, Ardeche, Rhône-Alpes, France. Also know as the Bear and the Lion Rock. Unlike Fontainebleau, Païolive wood is an astonishing forest of petrified rock and white oak that extends over 16 kilometres of Park land near Les Vans (Ardèche). 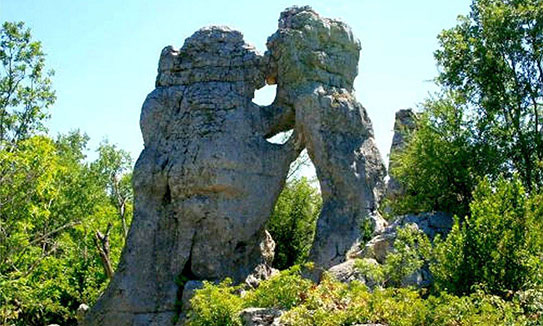 The wood forms a series of labyrinths created by erosion: a mineral and vegetal felsenmeer that contains the shapes of natural sculptures in a white oak forest. A curiosity of nature, this wood is abounding with wildlife and flora. The area has been inhabited by humans at least since the Upper Paleolithic, as attested by the famous cave paintings at Chauvet Pont d’Arc. The plateau of the Ardeche river has extensive standing stones (dolmens and menhirs), erected thousands of years ago.

In Brittany, the beautiful rounded rocks of the Pink Granite Coast still raise many questions without providing any answers. 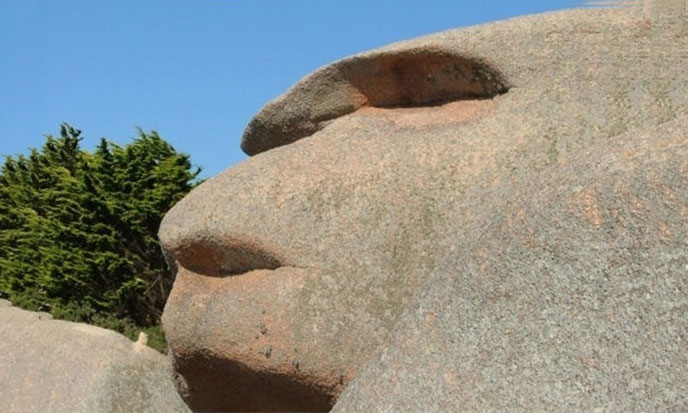 On pagetop appears one of those pink granite rocks, here are two more. But nothing can replace a visit. The pink granite coast extends over twenty kilometers from Perros Guirec Ploumanac’h in the Cotes d’Armor. But it is especially the delightful village of Ploumanac which concentrates the most beautiful “works.”

Land of Ice and Fire, Iceland has many rocks with distorted shapes, shaped by molten lava that solidified on contact with icy water. Some of these rocks are somehow troubling.

Here a monumental elephant head appears from the depths of time, a time that was not ours, but that of large animals and giants. 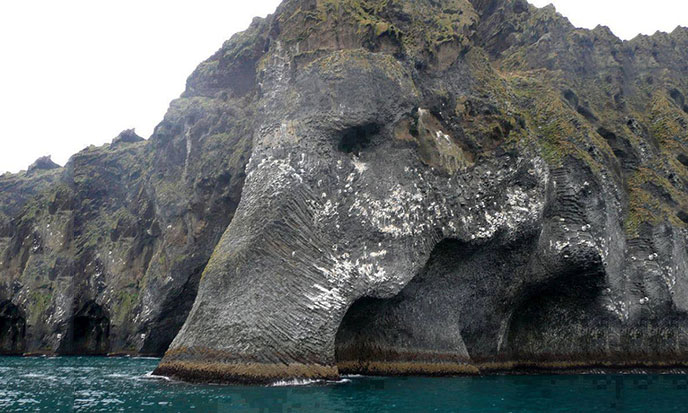 Strangely shaped rocks, are found on all continents. Which doesn’t mean they are natural. Giants were supposed to live worldwide. And they were natural too.

Still in Europe, the famous sculpted rocks of Sardinia, which has more of an archaeological wonder. Or geological? 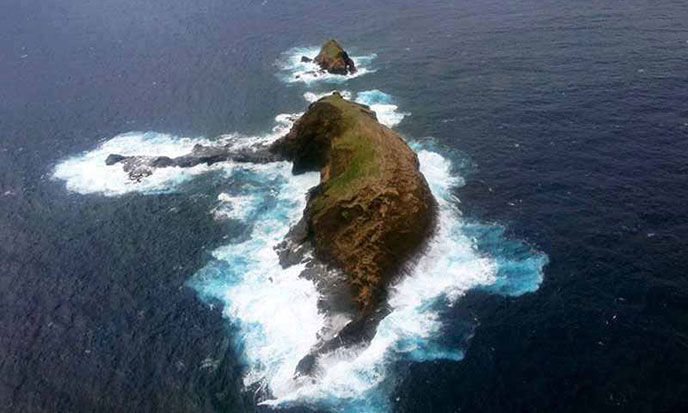 First this reef that offers the visitor a beautiful sky animal figure that you’ll have no trouble identifying.

Other rocks have strange shapes, found on all continents. Some of them seem to have been shaped by nature alone, like the rocks of Fontainebleau or those of Ploumanac.

This natural look is what makes them so disturbing. The rounded shapes, languorous, of Britanny’s rock along the Côte de granit rose contrast with the sharp rocks – somehow cut with a flint –  such as those of Capo d’Orso Sardinia, above and below.

That’s a lot of elephants, I say. We can find -naturally- this powerful figure in many other rocks around the world. Here in New Zealand, an austal island that has never, to our knowledge, known living stock of elephants, apart from those in zoos. 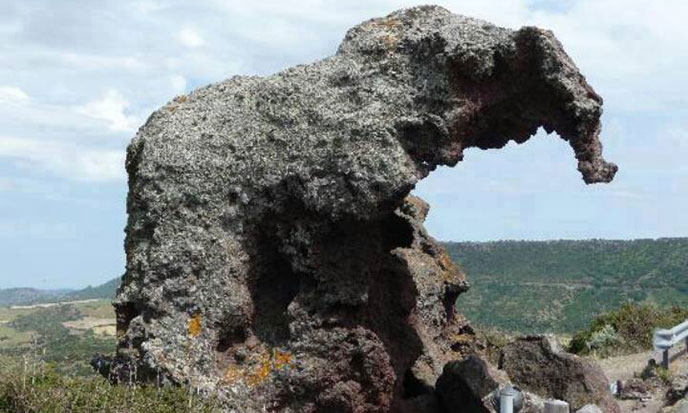 Once again, I tell you! This one comes from Molokai, Hawaii, USA. But what is the buzz with these big beasts? Animals without tusks as you noticed.

Just the beginning of a tusk, in the shadows at the corner of the mouth. The realism of the imitation is too perfect to be attributed to the blind elements. 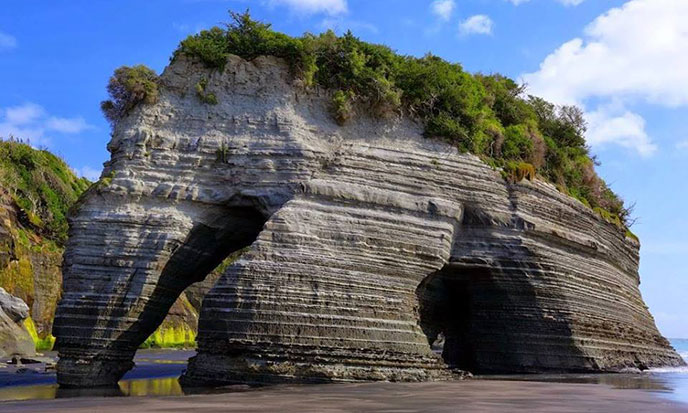 Otherwise we must admit that the wind, fire, ice, earthquake, landslide and all causes that contributed to this artwork are conscious entities as we are, and artists better than we are.

Anyway, if you have knowledge of a elephantine rock around you or in your walks, do not hesitate to send me a photo. How many are they on this planet?

These sculptures can not be the work of chance, since it does not exist. Some rock formations, like the one below the Sahara are considered entirely natural. This does not preclude an unknown artist to have a little remodeling. 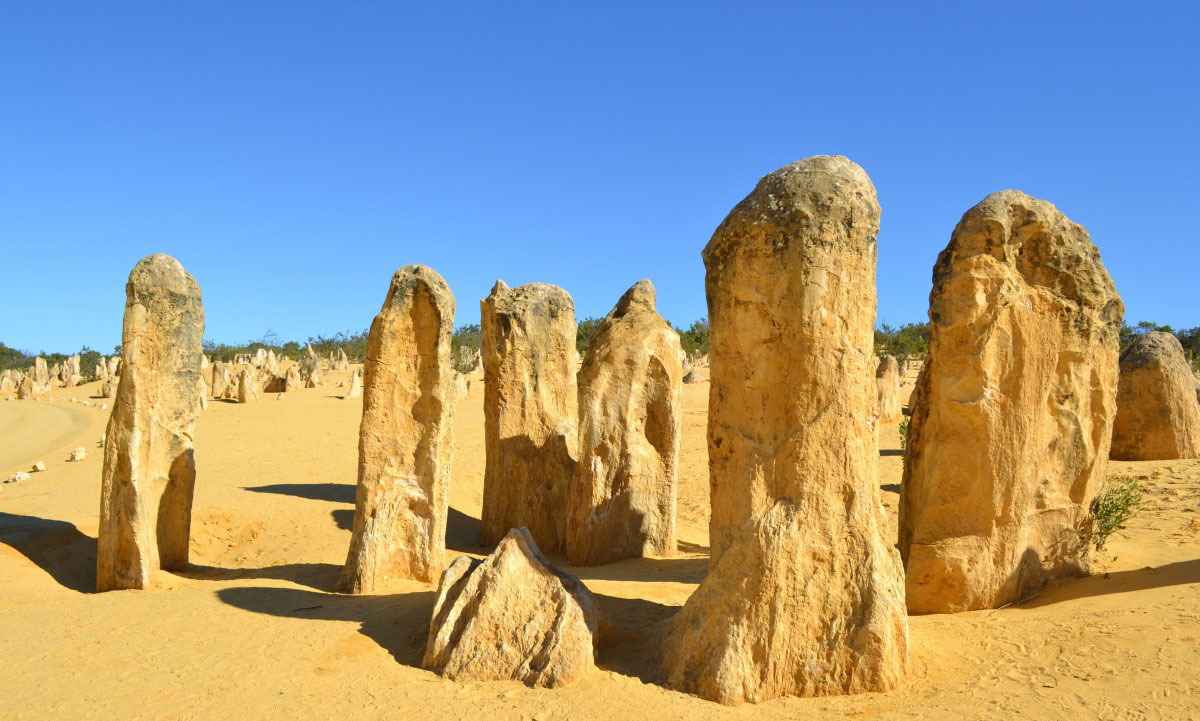 In megalithic wonderland, besides the gigantic blocks carved to perfection, we also find rocks that look natural, but do not have the song. Here it imposing block decorates the courtyard of a tourist hotel in Cuzco. There are cups and bowls in large numbers, the distribution affects a spiral shape. 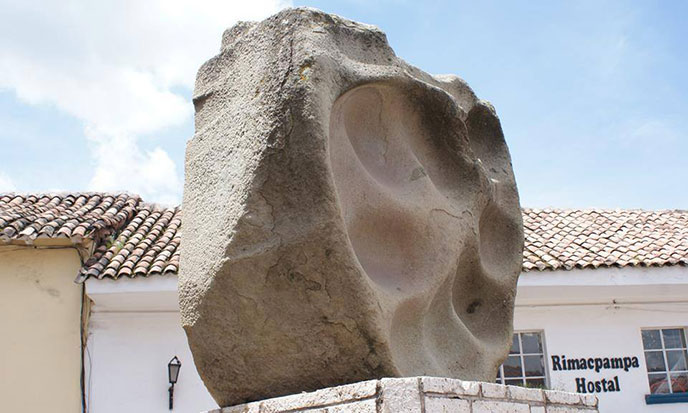 In Thailand, in the natural park of Phu Pha Toep, many bizarre rocks are the delight walkers. Despite the patter of geologists, it pays a lot to nature, I think.

To the extent that we now know that Civilization Pyramid was global, insofar as we found megaliths and Cyclopean walls on five continents, one wonders if these rocks are not a category that we dolmens had escaped so far. 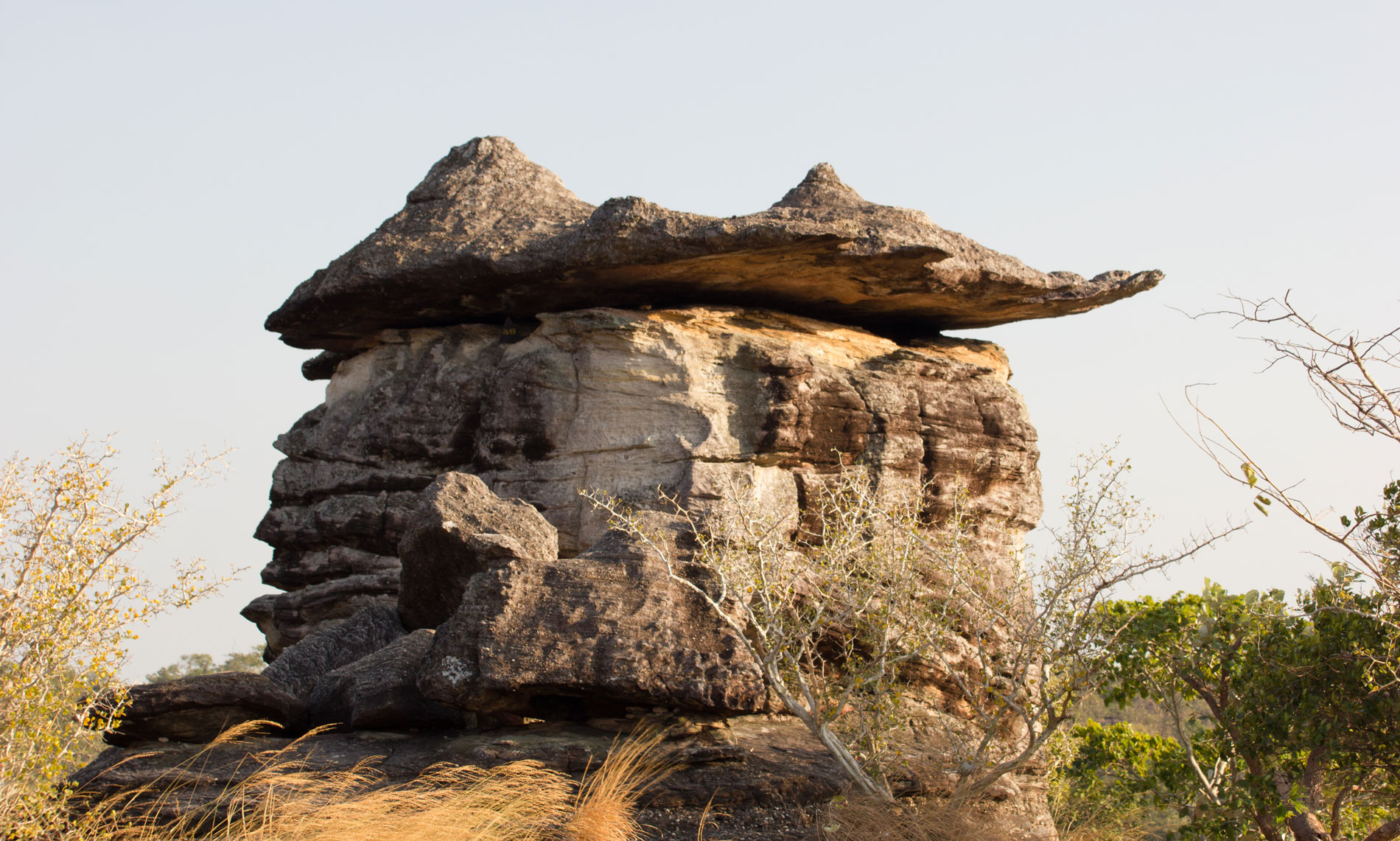 All lovers of the stones around the world are kindly requested to send me pictures of their strange rocks, where they live, or elsewhere. If the photos are quite numerous, a new approach of megalithic become possible thanks to you.