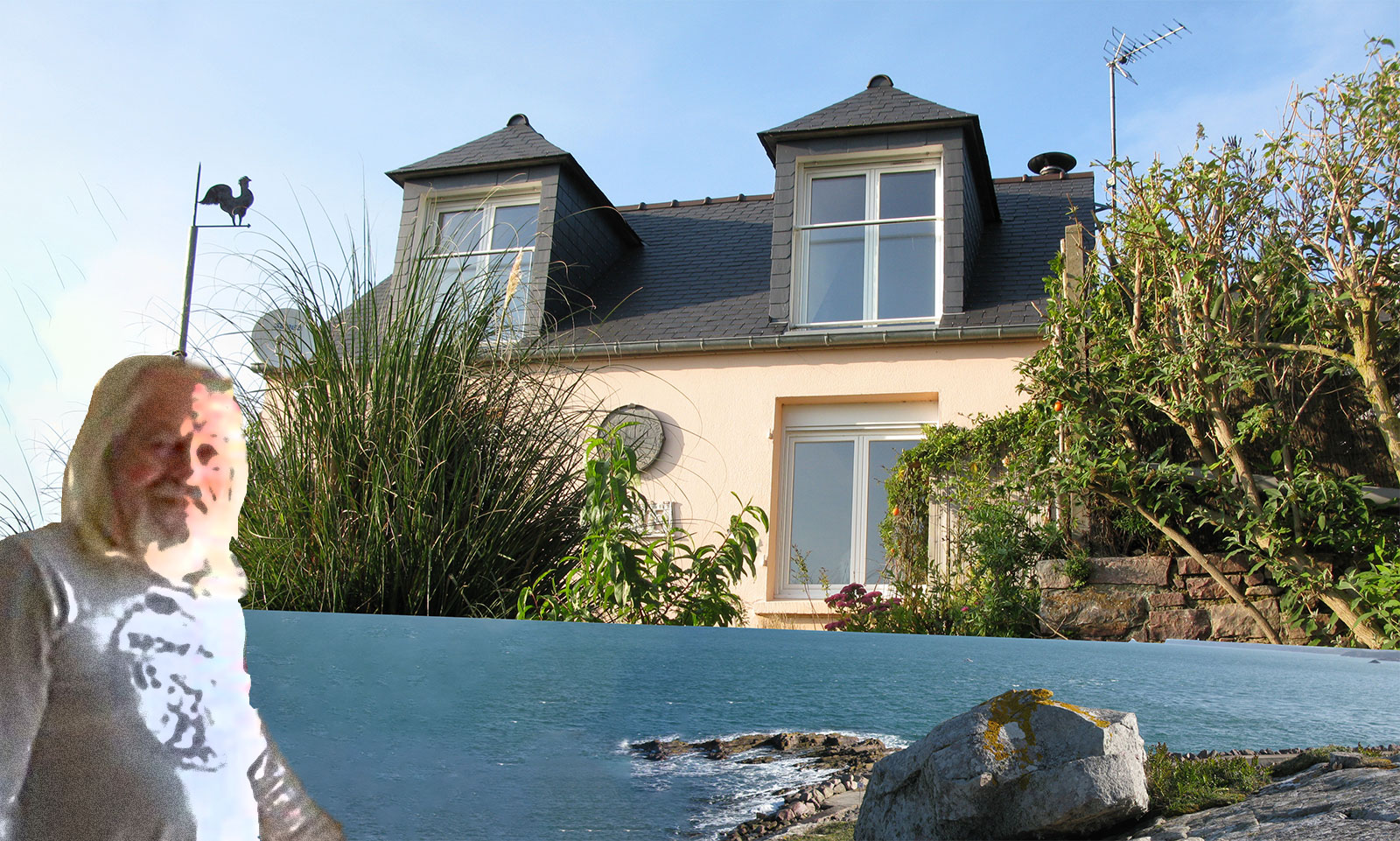 My house is high – so am I. We are both high on top of the Cap d’Erquy, Britanny, which allows us a view of the sea, the port, the sculptural point and some of the ten beautiful beaches of my eternal commune.

Yes, eternal. No chauvinism in there, what do you mean?

Eternal, Erquy is in more ways than one. This pretty fishing and yachting harbour has its origins in a small Gallo-Roman counter, Reghinea or Rekinea, according to the official version of local history. Moment please! Rekinea? The name is not Roman, but Greek. In Latin we would have said Rekinova, The new reki. We dropped the news, and Reki became Erquy. Which should be written Erki or Arki.

Which would be more Breton, by the way. Or more Arab? Arki reminds me of the Harkis, those Algerians who fought alongside Colonial France against their independentist compatriots.

Ar, Breton definite article. Ki is Ki or Chi, the subtle energy of the Chinese. Arki, land of subtle energy, I have known it since childhood. I lived it deep inside. When my parents moved here, I was 4. With Papa, I planted a pine tree – today venerable. A half-buried dolmen, the Devil Stone which gives its name to my street, makes the whole hill vibrate, echoing the powerful emissions of Guihalon.

My life is in Erquy. My liquid roots. My fine sand flowing between my fingers like a silk scarf. My land forever, my wild almost-island, my heather moors, my pink cliffs. This is why I chose to baptize my bio-energy with a famous name, reiki, which I spell reki, yes, the reki of Erquy. The name is certainly famous, but the technique is usurped. It has its origins right here, in Reki Nea, Reki Nevez, New Reki.

The etymology is not fanciful. It was inspired in me by a lover of Erquy, Hervé Kérivel. His father was keen on local history. A few decades ago, he unearthed this Greek etymology which tightens the link between the current name, Erquy, and the ancient name, Reki. Discovery which interested no one, neither then nor today, I suppose. No one is a prophet in his own country, they say.

I got hooked straight away. There is the language of the birds in there. I did some research. Here are the results.

The presence of the Romans in Erquy is no secret. On the center beach, near the pointe de la Hussaye, you can see the trace of a small pool. This is all that remains of the ancient Roman port. In Gallo-Roman Brittany, the port of Erquy was the resort of the rich bourgeois of Condate, now Rennes. A Roman road connected the two towns via Corseul, the ancient Coriosolis where the remains of a temple of Mars are found. Condate-Coriosolis-Rekinea, such was the service of this via Romana.

My garden clings to the slopes of Cap d’Erquy, where archaeologists discovered the remains of a Roman camp in the last century. Is it Laudanum, Bibendum, Babaorum or Petibonum?Names of Roman camp in Asterix adventures I don’t know, but he’s here. The Gauls who resist the Roman invader, a well-known story … Joking aside, did you know that Erquy is the model of the Gallic village of Asterix?

The cover page of the Asterix albums shows a glass onion magnifying a detail of the Côtes d’Armor. This detail represents the village of Asterix. It’s right at Erquy’s location. Uderzo has endowed this village with a cape extended by three reefs. At the end of Cap d’Erquy line up Les Trois Pierres,the Three Stones well known to local sailors.

Before becoming a successful designer, the young Albert Uderzo lived through the war here in Erquy. When his friend René Goscinny asked him to draw the adventures of the little Gaul, Uderzo, quite naturally, chose to locate him here, in Erquy. In my village. Today the invader is no longer Roman … But the Celts still resist!

Spicy detail, when Uderzo drew his Gallic village surrounded by the four Roman camps, he did not know that Cap d’Erquy once housed a Roman camp. Astonishing, no? I love synchronicities, coincidences that aren’t. On this point Erquy has always served me the lion’s share. I have always let Osiris guide me, and I praise him every moment under his real name: Al Hazar.

As I said, the suffix nea is not Latin, but Greek. This clearly shows that this ancient Reki was first a Hellenic trading post before becoming a Roman port in conquered Gaul. Oh yes, conquered, alas! The Gallic village did not resist the invader, and the little Gaul with the winged helmet is called Astericus.

Before being a Roman port, Erquy was therefore a Greek trading post. Apart from the name, there isn’t much Greek here. Nothing at all, even. However, to go back in time, we must not stop here. Erquy has much older remains. There is the Pierre au Diable dolmen in my garden. Another ruined megalith, the Ville Hamon dolmen, can be admired in the street of the same name.

There are also the carved rocks of the wild beaches. L’ourtoué, le Portuais, le Guen and Saint-Michel conceal astonishing sculpted rocks, giant heads or animals for the most part, that the curious walker will have fun spotting on the beaches in question. Continuing towards Cape Fréhel, other remarkable rocks – black as coal and rounded by the waves – emerge from the white sand of La Fosse beach. They represents a very rare rock formation. On this same beach, many eroded sculptures can be discerned in the pink cliffs.

The air is crisp and light, the spray loaded with iodine, the sandpipers run for their life at the water’s edge. Their compact band seems to be moved by a single pilot, as their movements are coordinated. 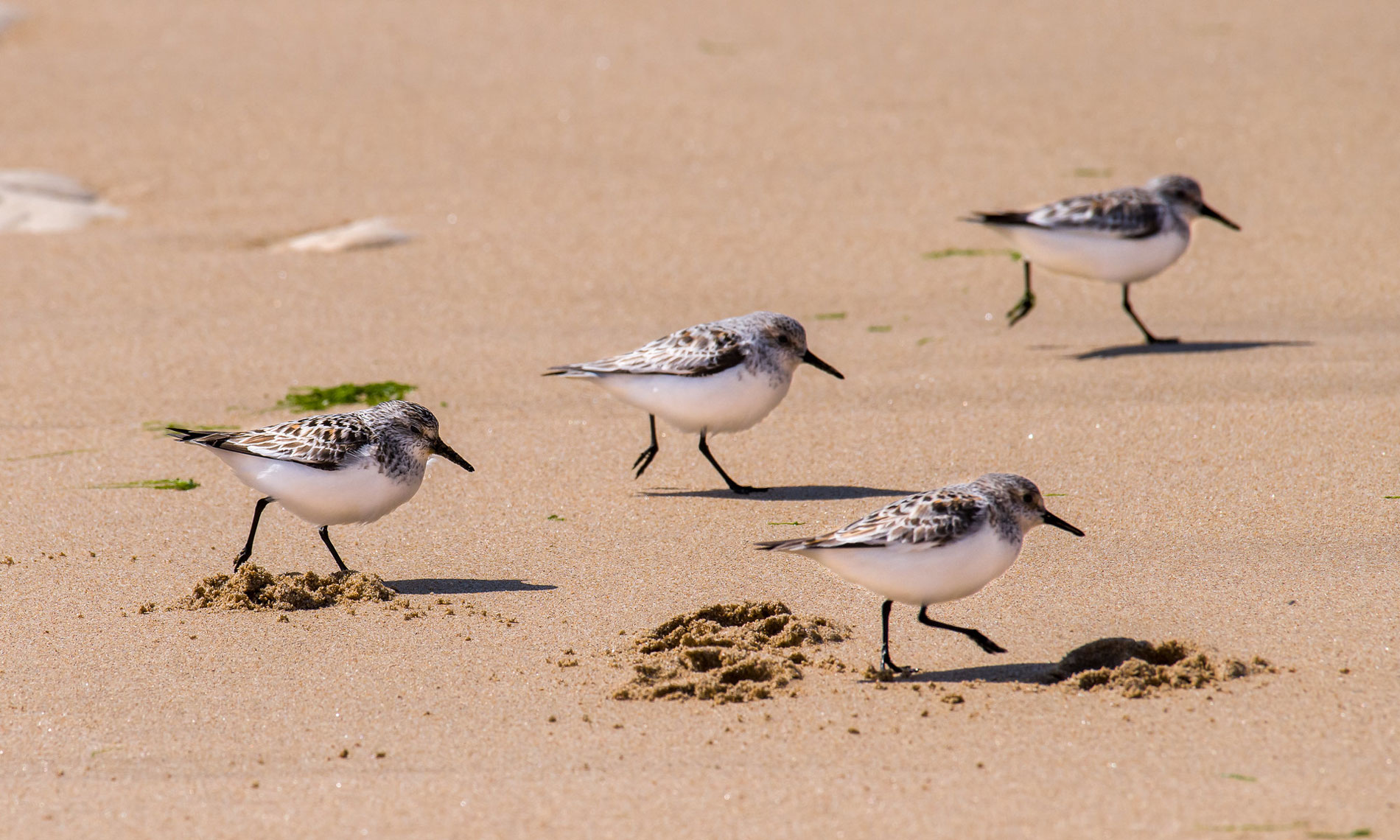 I walk, I get oxygen, I fill up with queen energy. The offshore wind brings the echo of Celtic lands. He speaks of Ireland and Scotland, Cornwall and Wales, lands dear to the heart of Little Britain, which watches the Great receding, just opposite, across the Channel.