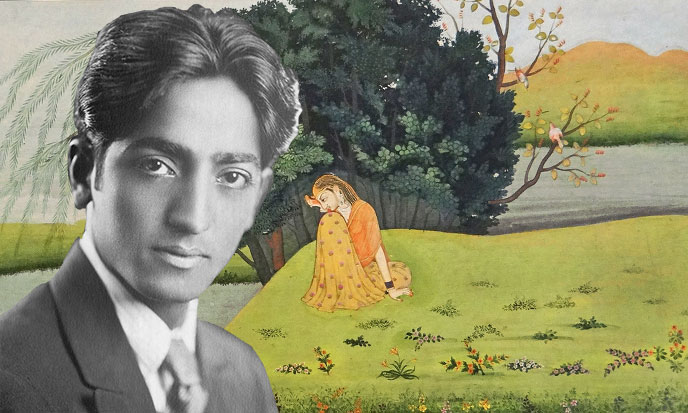 Appeared in theosophy and the counterculture of the 1960s, the thinking of Krishnamurti exerted notable influence to authors and personalities of different disciplines. Indian philosopher Jiddu Krishnamurti was born in Madanapalle in India May 11, 1895. He died in Ojai, California February 17, 1986.

He has managed the feat to have a profound influence on the history of ideas without ever yielding to the temptation of becoming a guru – chilly refuge for egotistical fools. His merit is even greater for when a young boy, he was spotted by Mrs. Helena Blavastsky, high priestess of a sect called the Theosophical Society, who immediately saw him as a messiah in power. Breaking with this nonsense, Krishnamurti enrolled at the opposite, advocating the refusal of sects, religions, priests and gurus.

“I do not know if you are aware of the image that each built around him and himself. This is done at every moment, and how can it be relationships with others that exist when personal impulse, the desire this spirit of competition, this greed, and all the forces that are maintained and exaggerated in our modern society, how could there have relations with another if each of us is launched in pursuit of his own personal success, its own success, I do not know if we are aware of this.

We are so conditioned that we accept as normal the pattern of life, each of us to pursue his own peculiarities, his own trends, and nevertheless seek to establish relationships with others. Is it not what we all do? You may be married , nevertheless you go to the office or factory all day every day. Whatever you do during the daytime, that’s what you pursue. And your wife is at home with her own troubles, her own pains, her own vanity, with all that is happening around her.

What could be the relationship between these two people? In bed in their sex life? So many superficial, limited and circumscribed relationships are in themselves the essence of corruption. One may ask: how do you propose to live if you do not go to the office, if you do not pursue your own ambition, your own desires to achieve or result? If we do nothing of all this, what can we do? It seems to me that this question is absolutely wrong.

Do not you agree? What we are concerned, is not it, to bring about a radical change in the structure of our minds? The crisis is not in the outside world is in our consciousness itself. As we have not understood this crisis deeply and not according to the ideas of some philosophers, but until we truly understand ourselves watching ourselves in us examining ourselves, we will be unable to cause such a change.

The psychological revolution is what concerns us, and this revolution can only occur if there is harmonious relationships between human beings. You say : ” If we doubt everything, we have nothing left” So much the better! How important are things that you hold if doubt can destroy them? What value are your traditions and all that you have accumulated , if the storm of doubt can sweep all? All that is build with sand: when powerful waves come, everything is completely destroyed.

Avoiding life, avoiding fear, you shelter in the dying things, and suffering is in this shelter. But by calling the doubt and suffering in the fullness of your heart, you will create what will be eternal and bear the stamp of happiness …

We must doubt everything until the climax of the doubt gives birth to certainty. It’s not when you feel tired or unhappy you must doubt: anyone can do this. It is in moments of ecstasy that you have to doubt, because you learn so if what remains is true or false.”