Left brain, right brain … Reasoning, intuition … Logic, creation … Architect, poet … The tragedy of our time is to deny half of our brains.

To see the future is impossible because no one can be judge and judged. No one can see the whole river from a boat  which one sails on. As the river is always changing, as one sails on a moving boat, no one can foresee what will happen. No one, no way. So how does the sighted one work? HeShe just use hisher right brain’s hemisphereOr his left side, to speak like Castaneda. Becoming double through ubiquity, heshe has two points of view. One is from outside.

Let’s say he is looking at himself from the river bank. Or from upside. But it doesn’t help to foresee dates. On this point, he is in the same mess as the scientist lacking of hypothesis. Because the art of sight, as well as the intuition of a hypothesis, implicates a complete commitment in the right brain.

At the opposite, logics and fixing dates are connected with the left brain. The sighted or the scientist have both to be at the crossroad between the two hemispheres. And this is not easy. The left brain is the rational, the logic one, while the right brain is dealing with the meta-rational.

Among scientists, the logical mind is highly developed, as a necessary – but not sufficient – scientific activity. They feel the chilly heights of unexplored right brain, so far from the left brain where they used to be so comfortable.

Thus the scientific method is reduced to strictly rational, pure logic. In this game, we run the risk of producing half-baked assumptions. Without the validity of the assumptions, there is no scientific progress. For a bunch of reasons, our civilization confined us in the left brain. And not just scientists, we’re all concerned. Generally, biologists find that the right brain is much less developed than the left. They have evidence that our right brain is atrophying. This is the kind of information that leaves anyone indifferent, because the right brain, for a majority of people, is like a spare tire when you have no car.

Is the majority of people mistaken? Don’t we behave like zombies? Disliking the right brain, or the left side, to speak as Castaneda, which is the key to the invisible, the key to the alpha wave, the key to the astral plane. With our left brainor right side we’re reasoning, calculating, it’s a perfect production tool.

By all means, productivity must eliminate alterglobalists and other rebellious cases: artists, awake people, truth seekers and light beggars. More the new era will accomplish, more the societal ego will strengthen.

The rulers of this world will not surrender without a fight. Hold on, damn it, let out your light, gradually the last piece of cheese will disappear with the last rat. According to Friedrich Nietzsche, this rational overdose originated somewhere in ancient Greece, when the Dionysian, or excessiveness of hubris, gave way to the Apollonian, the right order, the light of reason. For the west, it was indeed a milestone. But for the French, the real coup de grace was named René Descartes.

Cogito ergo sum, said Rene Descartes in his stove, in the vapors of the hemp of Holland, where he lived. I think therefore I am. Did he have to think hard to lay such a fine egg! Here’s the story: seeking a solid foundation to build his thinking up, Descartes ran a demolition company, called the methodological doubt. With this tool, Descartes demolish all information reaching us: our senses deceive us, our dreams deceive us, our wives deceive us,Sorry, just kidding. nothing can resist the Cartesian doubt.

More and more excited by the smoke of cannabis, he came to doubt his own existence. Feeling down, smoking the strongest grassThis is not only a joke, but the thesis of Frédéric Pagès in his book: Descartes and the Cannabis in Holland, the philosopher get out of his depth. At the very end, drowned as he thinks, Rene found this land to earth: “I think!” He saw him saved already. “If I think, therefore I exist! And if I exist, everything is becoming possible again!” He is reborn.Lost in translation : in french René means reborn While excited by his cheap discovery, he writes without rereading a square little book, the Discourse on Method.

Booklet which meets an immediate and inexplicable success and becomes, what a bad luck, the french rule to think for the next four centuries… and may be more. That is why France is square. While Rene was wrong all along. To be is unthinkable. Being is not thinking that you exist. Who wants to be, instead, stop thinking. The mental flow impedes arousal, thus separating us from being. Too bad that Rene has not supported the Batavian hemp. “I think, therefore I am not” he should say. 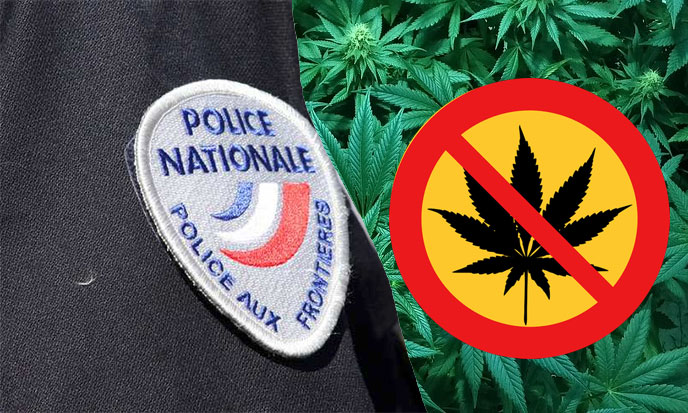 Yes, too bad. Without the shackles of Cartesianism, Europe would have won four centuries on his way to enlightenment. It’s quite curious that everyone has swallowed this outrageous without saying a word. Not everyone, indeed. A small Celtic island still resists the invader.Tribute to Goscinny and Uderzo with this Asterix’ quotation : a small Celtic hamlet still resists the invader. An island that perversely refuses to act like those damned French: Albion, the 18th century England did not fall headlong into the snare sound. Instead, English philosophy chose sensationalism.

This bright achievement reached the United States, giving birth to protestant pragmatism. Despite of that, human race is suffering with this reason’s inflation. Europe knew Kant Comte and Hegel, while hyper-reasoning became its golden rule. Primitive People consider this reasonning excess as our worst side, that is making mutants out of us. Unlike us, they’re always using both hemispheres. They know how to stay in between, on the Middle Path.

The major invention of Descartes, rationalism, does not mix with metaphysics. “Rationalism is defined mainly by the belief in the supremacy of reason, proclaimed as a true “dogma” and implying the negation of the pure intellectual intuition, which logically leads to the exclusion of any true metaphysical knowledge.” (source)René Guénon, The Reign of Quantity & the Signs of the Times Western philosophy is a time-machine: every new part depends on the former gears. One wonders if the Cartesian rationalism was the basis of individualism.

The same individualism whose awful excesses poison all aspects of today’s social life. Is there still time to turn the tide? Do we have the means to achieve this? And the guts? Release individualism and rationalism, is descending into madness and collectivism, we think. If the devil is in the details, it is often still in their absence. Sweeping generalizations that erase the subtle differences are more evil than the hair-splitting.

This is a common mistake: “Every day Science postpones a little more the limits of the known world.”

How many times could one read, from the pen of a scientific communicator or from the mouth of the Bogdanoff brothers, this famous cry of victory “that is in fact the exact opposite of the truth: these limits have never been as narrow as they are by this alleged secular science, and the world and man have never so shrinked, so much that they are reduced to simple units deprived, by hypothesis, of the slightest possibility of communication with any other order of reality.” (source)Rene Guenon, The Reign of Quantity & the Signs of the Times

That’s how Rene Guenon complained a century ago, and since then the situation has only worsened.

Admit that human life be ruled by reason, is to destroy all possibility of life. (Sean Penn)