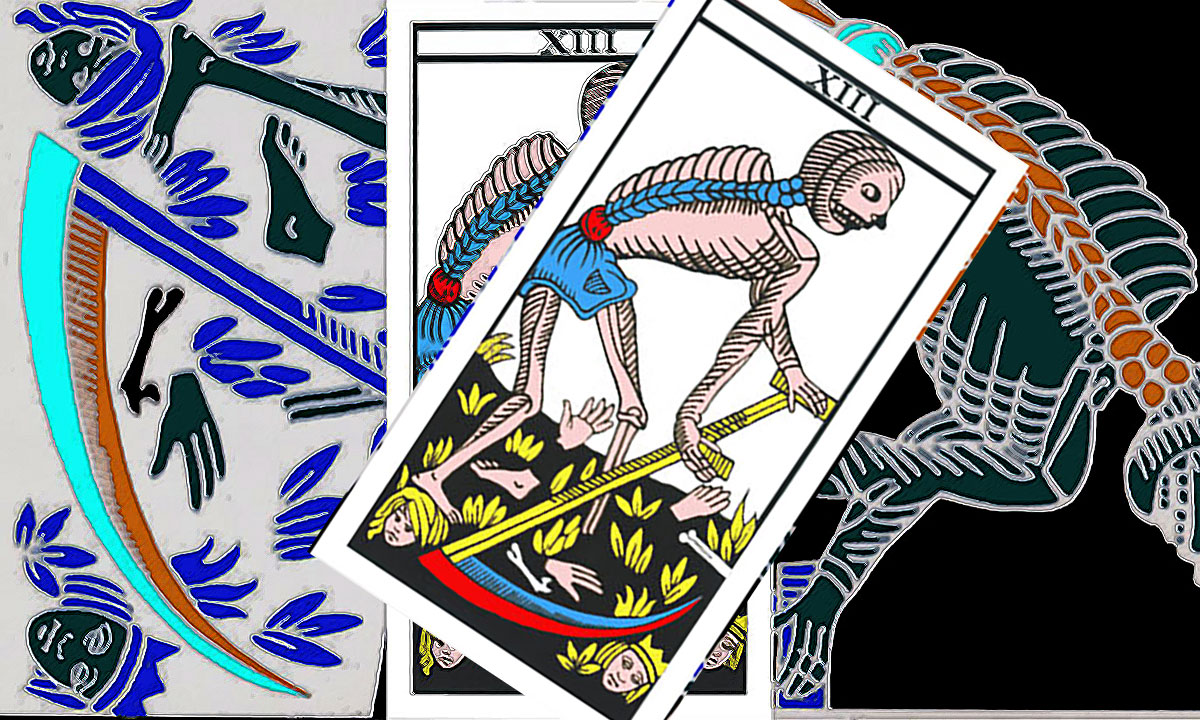 The Sleeping Beauty syndrome is the pleasant nickname of the arcanum XIII of the Tarot of Marseilles. Waking up your sleeping childhood is no small matter. The child grew up. The adult has come. But the secret wounds wake, opening round of the monsters inside.

A person often meets destiny on the road taken to avoid it. (Jean de La Fontaine)

You’ve found your way, you’ve made your place in the sun, you’ve built your nest. Yet you have not solved all your accounts. Suddenly, you are blocked. Vortex, maelstrom, insanity. Your trivial horizon turns into a complete mystery. Your daily life is plain and dull. Until the end, will you have to repeat every day the same empty gestures, the same vain acts, the same absurd rituals? Suddenly you’re tired.

Time stretches, the emptiness of your life obsessed you. Morbid, you look like a skeleton. Endless nausea, you’re upside down. Then comes the day you’re fed up being fed up. Thus you’re ready for Arcana XIII. Yet, since the dawn and the Magician, you’ve crossed so many steps!

You have vibrated in your flesh and suffered in your heart the pangs of the Lovers. You have known your first triumph of short duration, like di Caprio, you thought you were the master of the world, but the Chariot cut you in half.

Today, do you really know what you want? 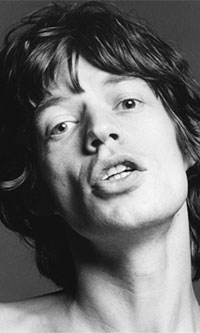 Then, in the footsteps of the Hermit, you’ve been looking for yourself. You tried, somehow, to look inside yourself. You felt so old, bent and broken by age. Your research disappointing placed you at the breaking point and the Wheel of Fortune took you into its vortex.

You have experienced ups and downs-mostly downs-that left you breathless and without juice. Step by step, in horrible pain, you have waived your childhood to build your “me” society. Victory after victory, you’ve made your place in the sun. Strength brings the realization of your fondest wish: you have money, success, social status. You feel in top shape.

Downside: this background concern that never leave you, unformulated. An obsession that always prevented you, ultimately, to fully enjoy your success.

By a sad day, this shadow invades the whole picture. Your wife fired you, your boss too. You are alone, desperate and stony broke.

Everything you’ve built over the years noisily collapsed, and  you too. When you awake, you are naked.

For the first time in your life, you consent to ask yourself the right questions. And the total lack of answer – not a single bit! – freezes you to the bones. There you are head over heels.

Welcome to the Hanged Man. You do not understand a thing, and for good reason : you’re upside down. What was up is at the bottom, and vice versa. All values are reversed.

Money, social success, the hustle … it all seems ridiculous to you. In your distress, you glimpse a way out. Guess you confusedly see the light at the end of the tunnel. 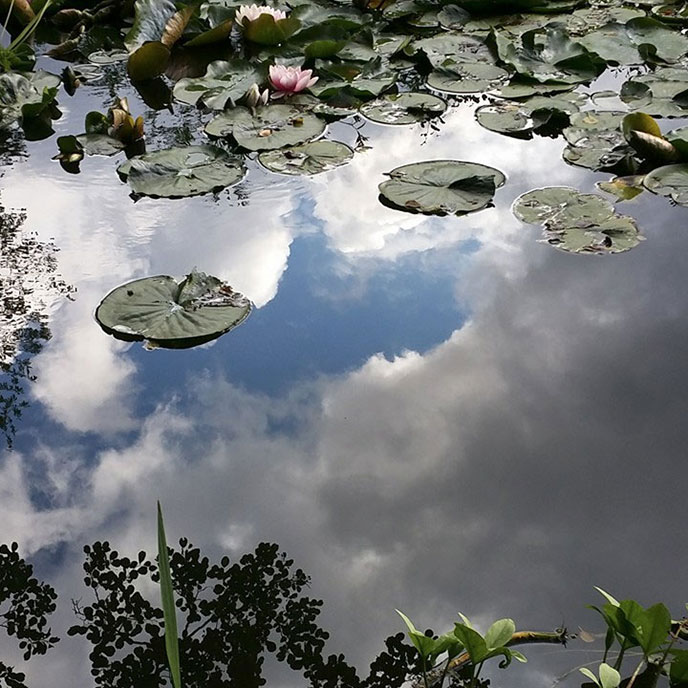 Yet, you are in the dark of yourself, poor visibility, where the terrors and traumas of childhood appear. You’re down in your cellar to raise awareness of the starlight. And there, in the light, lies the disturbing figure of the arcana XIII, the skeleton with a scythe, the image seen a hundred times in the chapels of Brittany, the familiar figure of the dance of death… 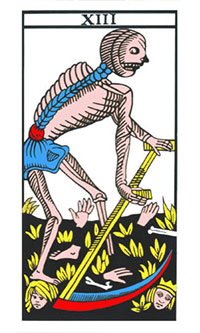 The skeleton in which everyone, without hesitation, can recognize Death. Well, no. This is not death. There is no chance or approximation in the Tarot. The arcana XIII – a skeleton with a scythe – is the only arcana without a name, while the Fool is the only arcana without a number. You can bet that the authors of this path of light had good reasons not to name this arcana XIII. It deals with death, yes, anyway. It deals mostly with rebirth. Initatory, the Death of arcana XIII is a true ending, an initiatic death.

This death of which the Templars had made the strange saying: “If you do not die during your lifetime, you will die by dying”

The strange saying of Templars is echoed by Jung. Awesome Jung! He is incomparable. “It is not by looking at the light that one becomes luminous, but by plunging into one’s own darkness, but this work is often unpleasant, and therefore unpopular.”

Arcane XIII represents the death of the old man who is in you. The death of old Adam, says the esoteric tradition. Look at you ! How old you feel since the Hermit! Look at this bent old man: his psychic structure, you have stretched it like an elastic through several arcana. Here she is tense to break. Patience: you will eventually meet a smuggler who will make you cross the river.

Tradition says that Arcane XIII is the only arcane where the help of a smuggler is necessary: ​​few succeed without this help. I have exercised this pious priesthood for more than fifteen years. I stopped ten years ago. In my opinion, this role becomes historical.

The smuggler is no longer necessary. Many young people go by themselves. It does not need to rebuff his engrams with a spoon, according to the formula of my benefactor Jean-Claude Flornoy. The tradition of smugglers has been restored in the last century, it seems that it must return to the distant past where it comes from.

Celtic Druids and Bards, ferrymen of the Boar Clan, have continued this ancient tradition through the dark ages. The tradition that is resurfacing now is still earlier. It dates back to the brave Tuatha De Danaan, masters of Ireland before the arrival of the Celts. Warriors of the Wolf Clan, the Ferrymen of the Sidhe can be said from the Atlanteans, and the Irish will confuse them with the Elves.

Centuries later during the spring of cathedrals, in the pure white light of the early Middle Ages when entire Europe was covered with sacred sites, most of the prime contractors were, coincidentally, the Irish.

Worthy heirs of Atlantis, the sons of the Wolf Clan gave us wonders as cathedrals and this passage to light. As powerful as ancient dolmens, and built to the same geobiological principles, the medieval cathedrals, like the megaliths, are due to this same sacred builder talent.This sacred parentage is an honor and a wonder that involves crushing responsibilities. The passer as I had known how the door is narrow. The initiate is always chosen by the living. The Living beckons the passer. The passer obeyed.

Once I was a passer. And now I am just a passer-by.

When I wrote this page eight years ago, those words were still true. but many things have changed since then. Everything is going so fast. Nothing is like nothing, for a regular from before. Well, I’m used to that time too, well obliged. The main change is the necessary presence of the smuggler during arcane XIII. It is much less true. Now many young people do it all quiet, they pay a complete cleaning without even knowing their engrams, it’s really the dream I think, when I compare with how we shit in the 90s. very close, right?

In those years, we had to bounce our engrams with a spoon (source)Thank you Jean-Claude Flornoy and digest everything in pain, without the slightest detail being spared us by the smuggler, who repassed us twenty times the horrible spectacle until ‘to complete disappearance of any negative emotion. And there only came the catharsis. Heavenly relief. Intense moments. Laughing rest. After the effort, the comfort, says the proverb. It seems that the young candidates to Arcane XIII no longer have the effort or the suffering in the cramming program. Good for them. They benefit from an epidural delivery.

So, it’s useless to write for an arcane XIII, I do not practice anymore, and I tell you it’s useless. when the time comes for you, the passage will be done alone. Buena suerte, amigas y amigos. (8/12/2018)