Be careful not to laugh when someone tells you about his misfortunes. It may have a bad effect. The unfortunate one thinks that empathy is not your strong point, but he is wrong. Your empathy is full, his misfortune is false.

Quite simply you have seen what he does not see. No word can express this reality. Your laughter can show him, as long as it only contains empathy.

Merlin doesn’t laugh at anyone. He’s never laughing at, ever laughing with. The enchanter doesn’t care about fate. He’s a seer, remember. Merlin’s laugh is neither mocking, nor sarcastic, nor hurtful. It’s a seer’s laugh. This kind of laughter is frowned upon because it is not understood. And that is understandable : so rare it is. Like the seers.

Do you mean sensitive?

Let’s take a look at the unfortunate man you had the misfortune to laugh about and who had the bad idea of ​​getting upset. Being at this point susceptible testifies to a strong ego, certainly too intrusive for the work that I propose. Precision that will concern more than one: the level required for individual internships is sensitivity, which is the possibility of perceiving the pressure exerted on the subtle body.

I insist: the definition of sensitivity I give doesn’t match the usual one. I’m only dealing with subtle waves. No moral censorship is exerted through this reiki practise. Sensitivity for me is the ability of perceiving subtle waves.

I am speaking to awakened beings, in whom clear consciousness is dominant. The test question is simple: do you feel, yes or no, a pressure exerted a few centimeters from your skin, on your subtle body? The test should be performed not by you, but by a third party. If it is conclusive, you are sensitive. The subtle feeling must be strong and clear for Erquy’s reiki sessions, otherwise the benefits will be invalidated. Non-sensory, please refrain.

But you will say, why the laughter? If the interlocutor is likely to misunderstand and react badly, would it not be better to refrain from laughing? Perhaps. Or maybe not. The image that opens this article presents us with a disturbing face of Merlin and his working magic. Looks like a mix of Hitler and Doctor Struggle. Very repulsive. Grave inhuman.

Yes, maybe it will have that effect on some, but I doubt those will read me. And precisely, in the event that they have landed on this page by mistake, this disturbing image is likely to put them back on the right path, that of Wikipedia. Useful, precise, archi-false but always strictly consensual in the dominant way.

As long as you live, take care not to judge people on the look. (Jean de La Fontaine)

If Merlin once could embody evil, he only worries fundamentalists and other naive Christians, all infinitely respectable, but misguided if they read this. They will have the intelligence to sprinkle their screen with holy water and avoid returning to it.

For all the others, Merlin’s laugh is essential, as we will see. 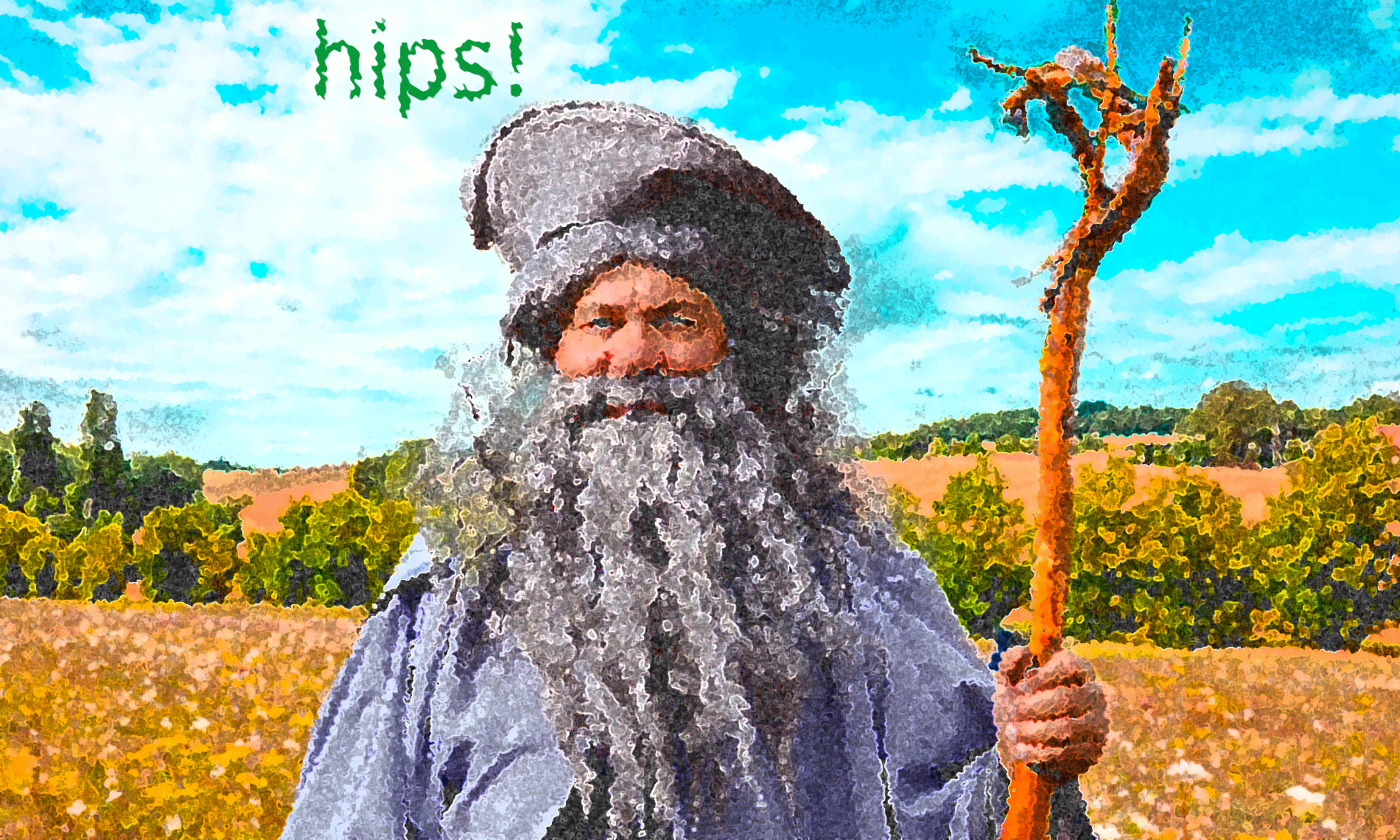 In the Arthurian cycle of the Quest for the Grail, this anecdote is reported which illustrates very well the famous laughter. A furious trooper pounces on Merlin, his great sword raised, ready to strike the wizard. “Say your prayers, Merlin! You’re going to die right here, right now!” And Merlin bursts out laughing. “Death will come that is not mine,” he said. His opponent stops his gesture, taken aback. A crossbow bolt pierces his throat. He collapses in a gurgling noise.

Merlin couldn’t help but laugh because he sees the future. He saw Perceval’s intervention just before it happened. What made him laugh was the precision given by the trooper: you are going to die right here right now. Here and now, it is whoever says it who is. The soldier condemns himself with his own words. It will teach him how to cast spells at a wizard too powerful for his weak strength. The negative energy that is sent to such a man returns to the sender multiplied by ten, by a hundred or by a thousand, depending on the power of the wizard targeted.

Knowing the future is also what makes me laugh when an intern tells me about his misfortunes. I see that all this will very soon be the least of his worries. I see the improvement coming for him, the blessed time when he will have much more to do than feel sorry for himself. But there is still more.

My laughter is affectionate. It is the laughter of the young mother who is moved by the first steps of her child. The amazed laughter of the father who discovers that his little girl can swim. The fond memory of the moment when I myself went through it. And I can already see that soon, very soon his turn will come. This laughter is a kiss to hear.

You tell me that your blockages make your life impossible. To be finally rid of it is your dearest desire. It would be a real relief for you. For any answer I’m laughing. And you start laughing too. My laughter is not aggressive. He is not mocking or demeaning. It is a laugh of connivance. That’s why you laughed with me. You don’t know why you’re laughing, but you know who: you’re laughing at yourself. Here you are healed.

As long as desire holds you, you are in the ego, you keep your blockages. The warrior hopes for nothing, he has no lack, he has no desire that gnaws and prevents life from unfolding its unexpected splendor. And above all, he does not expect results from his actions. He always acts, without getting discouraged. He remains indifferent to the gifts that come to him as to those that are withdrawn from him. In both cases, humbly, he thanks the Living.

The way of the warrior, the bushido, the ancient Rule of the naguals, the Round Table, the Poor Knights of the Temple, the Teutonic Knights, the Shaolin monks etc, all these ancient disciplines foreshadow the martial arts, practicing the close union of the spiritual and the combat. Our time has forgotten the very meaning of this union. Our times have forgotten many things, starting with the most essential. We are so deep in the dark age that we have forgotten the effect of the light.

The fantasy of the godsFrench: La fantaisie des dieux singularly complicates the human adventure,French: l’aventure humaine but if we say to ourselves that it is for our good, where is the problem?

When a fine chai has calmed our laughter, I said to him: If you want to get rid of your blockages, you want. If you hold, they hold you. Let go.

You laughed again. I had the feeling – not giving you advice, who am I to do that? – but rather telling you good jokes, and your reaction made that impression even stronger.
–If these blockages poison your existence, why did you put them in place?
You laughed even more, a little too loudly perhaps.
–And why use so much energy to maintain them?

There was something cracked in your laughter. Your certainties? Is it bad? Do you have to be iron to face awakening? It is necessary to be of flesh, to hold like a rock,French: rocher to let go for the adventure.