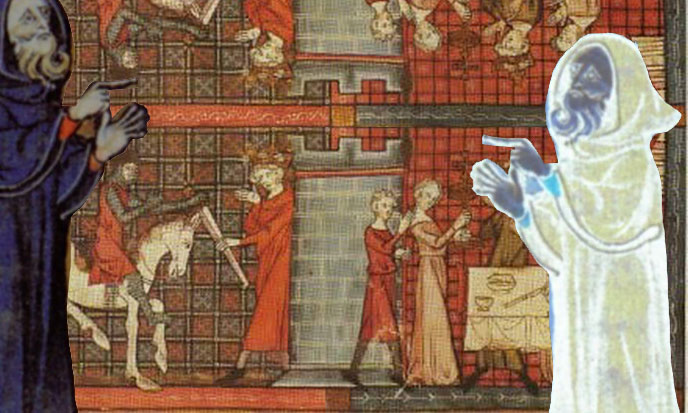 The bearded figure of Merlin belongs to the most famous druid in the history … or in the legend. Let us track the magic steps of the miracle maker and wonder-storyteller.

The adventures of Merlin are part of the storybook cycle of the Round Table which places him in the 6th Century AD.

Even if we know it, we can not help seeing in this early Middle Ages of chivalry, resurgence of a far more distant past, that of the Bronze Age, that of the Lord of the Rings. The same ideal of chivalry link them. This is why Heroic Fantasy, although describing the lifestyle of the Bronze Age  -i.e. the period between 9000 BCE and 2000 BCE- looks so much like the early Middle Ages, ie 5th, 6th, and 7th centuries AD. Same armors, same values, same technology, same dreams and same nightmares.

Tolkien, perhaps unwillingly, tells us about historical events. His Gandalf, wizard gray then white, might well be the wizard who guided the Tuatha of the Bronze Age, the famous people of Dana, the Great Goddess. Similarly, the Orcs would be the hominids who disappeared at the same time. History is cyclical, it often stutters; the tone of the Bronze Age was revived seven millennia later, in our Middle Ages. Tolkien has drawn on the Akashic Records to give us back the original version.

Gandalf and Merlin have too much in common. Everything joins them up, so that overtime it becomes increasingly difficult to make a difference between them. Our exciting Middle Ages are full of time doors through which flow some visitors. Dark Forest is a perfect symbol of that, which combines in its valleys medieval ruins and megalithic tombs. 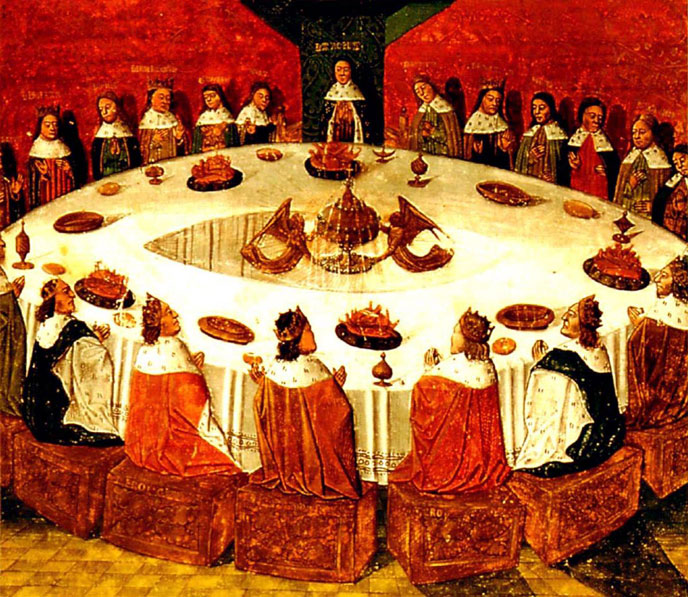 After starting in half shade, Merlin and the Round Table got some colors back in the 19th century… Does it all began in the Middle Ages of the 6th century CE … or thousands of years before, with a druid named Ram? What is certain is that the emblematic figure of the wise healer resurfaced in the Middle Ages. The spirit of Merlin, ever present, is embodied so powerfully in the dangerous and magical world of legends.

Such were Merlin, Gandalf, Rama and later the Templars or the Shao Lin monks. Tradition once started ever goes.

The chivalry and feats of arms leave the secular field to embody in the orders of soldiers monks, like the Templars. And the springtime of cathedrals revives a science even more ancient, the art of sacred building of the Antediluvians and the Tuatha, dating back to the Silver Age, or to the time before the flood. No one won’t ever be suspicious enough of time shifts: they are sometimes sufficient to spread distressing falsehoods. When they do not sign the pure invention of an era that has never happened!

Obelix, for example. He must have taken a menhir shot on the head, this friendly Gaul. For he illustrates an anachronism as big as him: his profession of menhir cutter is a huge historical mistake. The Gauls are obviously not those who set up these stones; the megalithic civilization is far anterior to the arrival of the Celts -or Gauls- in Western Europe: 3000 years separate them! Obelix is closer to us than to megalithic people!

The ancient Celts have never claimed the menhirs, dolmens and stone circles, even if they considered them as sacred stones. Unfortunately, the huge blunder that spreads in the Asterix albums makes all young people think that the Gauls have straightened the megaliths. Nay! They’ve been erected by the Tuatha. The Gauls respected their priests healers, the Druids, who embodied both wisdom, symbolized by the gold of their billhook, and light, symbolized by the white of their dress. 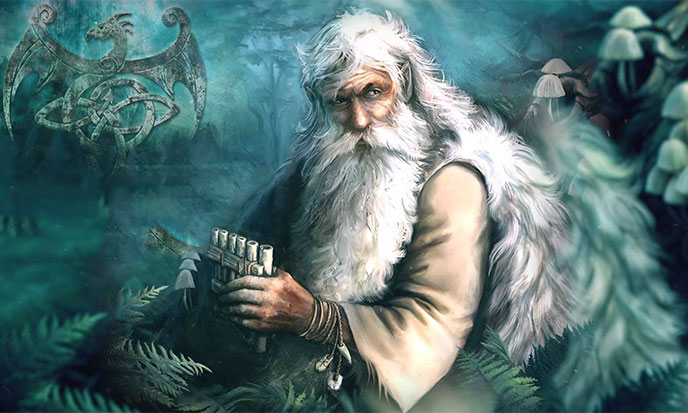 Who is really the enigmatic Merlin? “Druid and enchanter of the 5th – 6th centuries, he would be born of a FætogThis is a Man Fairy in Norman and a young Druidess. Some place him at the time of the Ancient Celtic Druids. What is known is that the names of Merdhin and Myrddin were successively used to describe a single character. The name of Merlin was adopted later, associated with different qualifiers, the Magician, the Enchanter, the Man of the woods.”

Many characters have had his name, and despite everything, “It is not known whether Merlin really existed, the handwritten sources of that time having disappeared. From the 13th century to the 15th century, most books that talk about Merlin also evoke Arthur and the Knights of the Round Table. But stories featuring Merlin date back much longer time. There are traces of a Merlinus Ambroisius, of royal descent.” (source)wikipedia His origin is probably former to Rome, it is said that his mother was a fairy…

“Son of a witch or a fairy, his origin remains obscure. Ancient legends link his life with the cycle of Atlantis, from where would be native his mother Charis, daughter of King Avallach of Atlantis, while his father, the Breton Taliesin, would be the son of Elphin, king of Caer Dyvi. These differences of origin come from the fact that no real history has yet been discovered, and therefore, all the versions remain possible.” (Source)wikipedia The door is wide open. All dreams are allowed. 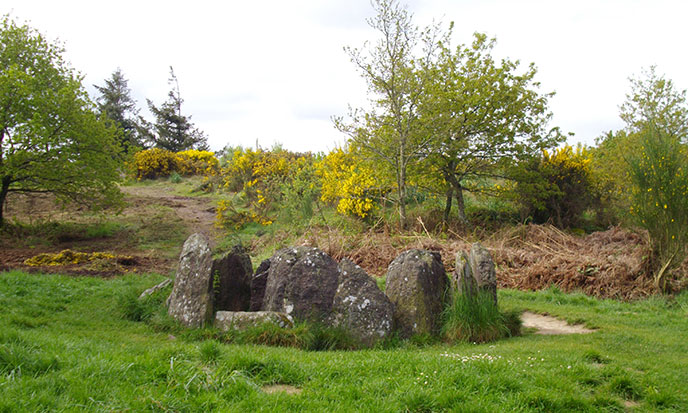 According to legend, Merlin was living either in England, in a small tower on a big hill in Wells, or in Armorican Brittany, in a subterranean home in the Dark Forest, at the feet of the beech of Ponthus. “His role in the Arthurian legend is to help carry the fate of the Kingdom of Britain, grouping together the present England, Wales and Brittany. Thanks to a legendary wisdom, he became the friend and adviser of the king Uther Pendragon.

On the death of the latter, he organized the challenge of the sword Excalibur which allowed Arthur, illegitimate son of Uther, to succeed his father. Then he encouraged Arthur to establish the Round Table to launch the knights on the trail of the myth, the famous Holy Grail’s quest. At the end of his life, despite all his knowledge, Merlin could do nothing against the fate of the Kingdom of Britain and the tragic end of King Arthur. Originally, the legend of Merlin was not part of the Arthurian cycle. He had existed long before Arthur.” (source)wikipedia

Multiple and shifting, inexhaustible source of inspiration, Merlin continuously evolved through time, to become the protean character of popular literature, “enchanting, prophet, man of the woods, master of the animals, wise, a magician pure and close to nature, close to the god Pan in the Greek mythology. Symbolically, Merlin represents goodness and dream, nature in its original power.” In him, everything fascinates us “because he is the representation of an eternal archetype.”

Transcending history and legend, Merlin embodies the druid, emblematic figure of the Old Religion. “The character will somehow be christianized afterwards to be included in it, but we can recognize in him the archetype of the druid: proximity to nature, magical powers, supernatural knowledge, wisdom, long life, role of guide or of adviser of the mighty. In a growing Christian world, he represented what remained of the old tradition: the dying druidic world.” (source)wikipedia

On the evening of his long life, “Merlin fell madly in love with the fairy Viviane, to whom he confided the secret to bind a man forever. The fairy Viviane began therefore to achieve this magic, drawing the “nine circles” around Merlin asleep. The magic being powerful, Merlin was trapped for eternity in his jail, to the great regret of the fairy Viviane who did not believe that the thing was possible.” The legend says he still lies at the lake bottom of the castle of Comper, the home of Viviane.

But we can find his grave in several places, as the old bard is still popular. “Thus, in the forest of Paimpont, often identified as the Dark Forest, there is a stele on which is written: “Here was imprisoned Merlin by the fairy Viviane.” (Source)wikipedia 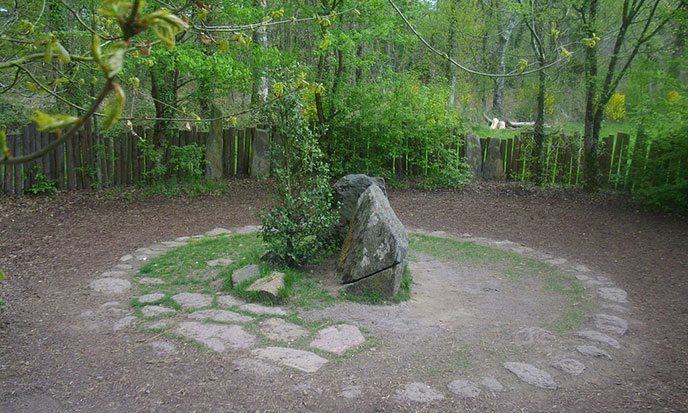 Nearby, still in the Dark Forest, is also venerated a megalith called the Tomb of Merlin, since nothing is fixed in the burgeoning and proliferative legend of the most famous druid enchanter.