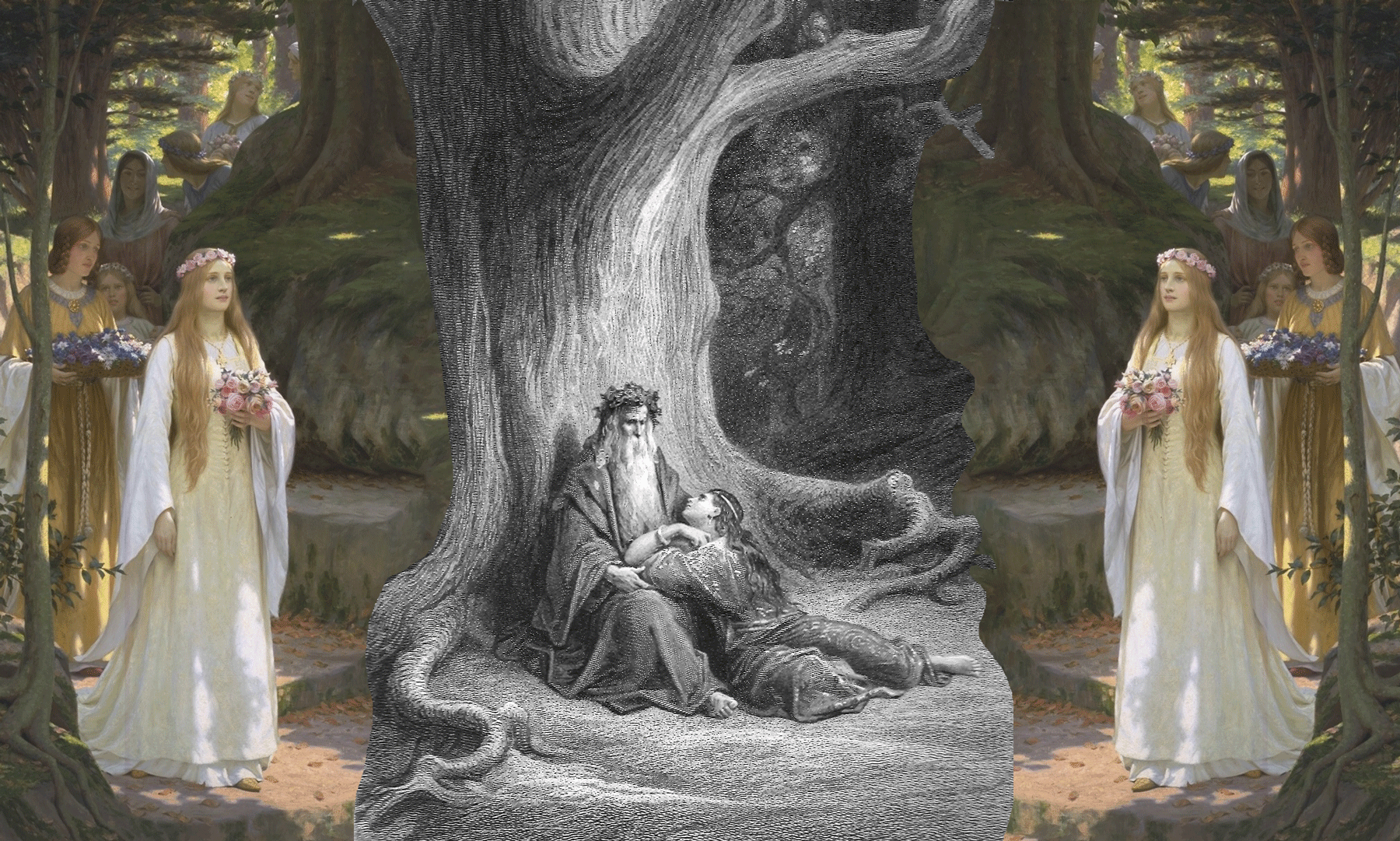 As he approached his seventies, Merlin grew tired of playing the magician for King Arthur of Brittania. Leaving the Brotherhood of the Round Table, he crossed the English channel to settle in Armorica,Britanny chosen land where to end his days.

He loved its windward coast, its torn rocks, its bird cliffs, but above all, he cherished the great forest that held the heart of the peninsula. Bro Killian, the mother forest.English: Dark Forest Dark Forest, which was not yet limited to the small forest of Paimpont but covered all the center of Armorique, along the backbone which divides the waters between the south and the north coasts.

Often he followed the course of the rivers, bathing naked in the streams, drinking in the water like a bird, watching the large animals, singing gambling refrains, alone like a conger out of the water. He crossed all the sunken lanes, which in Argoat are plenty. He was looking north at noon,lost in translation and noon at two o’clock. But above all he loved the forest. His forest.

In Brocéliande la Grande,Dark Forest he loved the Hôtié dominating the dark vault of the Val Sans Retour. And Guihalon father of stones, great menhir Guihalon at the gates of Méné. He also cherished the large rocks and chasms of Huelgoat, in the magical forest that forms the western tip of ancient Brocéliande.

But he loved the enchanted site of the Barenton fountain even more. He spent beautiful days there, unused, serene, sitting alone on the threshold stone. It is said that a few drops of the spring thrown on the said stone immediately brings a nice downpour. I tried several times. All I had, in the heat of the heat wave, was a shower of kisses. My fairy was cuddly. Frankly I prefer.

Near the fountain, he dreamed of Arthur, replayed in his head his former conquests, lands, fiefs, women. Seventy full years escorted her to the brink of death. He could see himself there already. The good life, the loud cries, the battles, the feasts, it’s all over now. Everything was behind and belong to his past. At last.

Choose your words well for they are what create the world around you.

From time to time, a string of bubbles rose from the bottom of the stone vulva. The bubbling spring is always a good omen. The water rises from the depths loaded with natural gas… like radon. Possibly not natural, but highly radioactive. Present in Armorican granite. But let’s move on. Merlin couldn’t take his eyes off the emitting bubbles that seemed to come from far away, from central earth perhaps?

As he looks better, his eyes get used to the darkness. For a long while he scrutinizes the abyss. He fixes the dark void near to grill his eyes. It was once made into a song that begins like this: I burn my eye at the bottom of a well. Sad news: the air is lost. But an image is found in the black water. A bright vision that balms his itching eyes. Such a race. A long dress as a trace. White arms. Such a grace. The features of a child crowned with a virgin’s face. 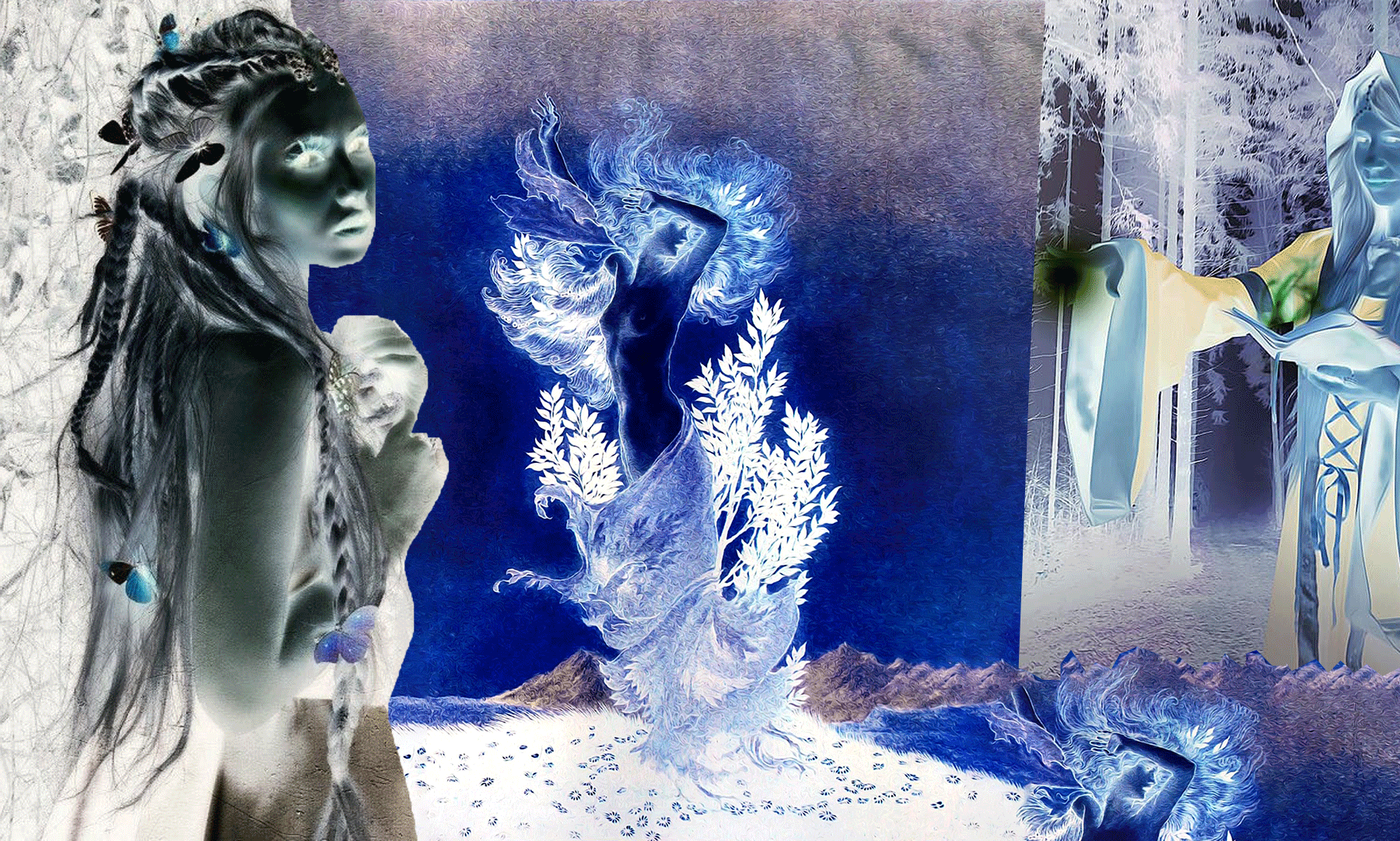 The most beautiful of woman’s faces. Or a child? The features of a fairy, a fresh face sparkling with youth, nothing that evoked the hideous specters of the depths. The old wizard was delighted, but the flesh man was upset. Incredible image that arose by miracle from the bowels of the earth. It seems so real! If this woman exists somewhere under his feet, the enchanter feels ready to dig to the center of the earth. He will turn into a mole, he will advance with the force of nails and teeth, but he will find this beauty queen.

Merlin jumps. The face has moved. He looks up and sees that the apparition is not. A woman of flesh stands before him, even more beautiful than his reflection in the fountain. She smiled at him with all her pretty teeth. The powerful sorcerer loses all his means. He stammers incessant sounds. The beauty bursts out laughing.

Merlin is so perplexed, and at the same time so seduced by the sublime apparition that he does not know what attitude to adopt.

-I know you Merlin. I saw you in a dream. I know you often come near my fountain. If you love this place, then I love you already.
They stared at each other for a long time. Long time. Recovering some assurance in the light of the beautiful frank smile of the young girl, Merlin manages to articulate two words; he says more, but only the last two are audible.
-Mmbllgll bllhh your name?
-My name is Viviane, but they call me the ivy fairy. I die where I am attached. And I want to die in your arms.

Thus begins for the old man his most beautiful love story. And the page of violence turns for him.

The Wedding of Flesh

The ivy is made flesh, and the flesh is made great on the two lovers. Nothing matters more to them than the increasing intensity of their antics. For the old man, all shame drunk, the forty years of difference are a good way to rejuvenate. He can’t change his physical appearance – or he doesn’t want to. But in him, the sap began to circulate again as in the fine weather of his maturity.

This indomitable energy that he used to fight, to kill, to hurt, to spill blood. No need to regret the mistakes of the past, it would be committing another mistake, even more serious than the previous one. Her excuse was the great youth and short sight of warriors.

Only Lancelot honored his Queen of Hearts. The Queen of Brittany who was the wife of her King. Lancelot broke his word. He disappointed the knights his peers. But love took it. He ran away with the beautiful Guinevere. He loved her more than reason, with a love that has no season, in the woods that have no home.

“He did well,” said old Merlin to himself. “And when I look at you, my ivy fairy, I understand that I did well too. It was time.”

A whole life to fight among this band of demented knights, all these years under the orders of Arthur, bastard of Pendragon and heir of Excalibur the Magic, terrifying gift from the former gods.

And Viviane embraced the old man, so that he would become young again in the loving arms of the ivy. Ivy best describes the fairy Viviane, adopted daughter of the Queen of the Fairies, Morgane de Brocéliande. Merlin goes mad with her, he puts her on top of his very charge, and transmits to her all the secrets he had wrested from the stranger during a life of research, work and pain.

One hundred times on the loom, hand over your work. (Boileau)

Patience and length of time are more than strength or rage. (La Fontaine) 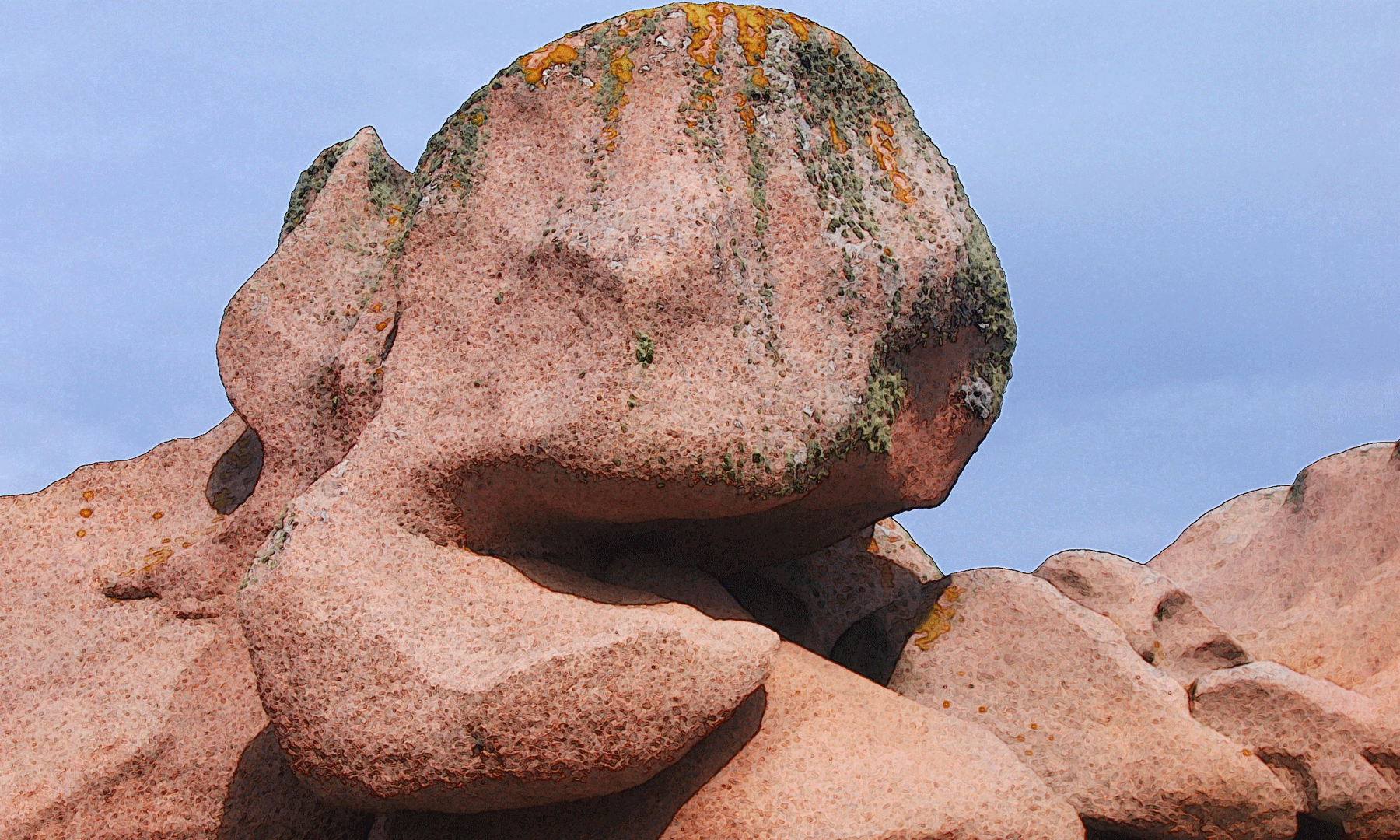 The legend is solid. For centuries, it has been repeated over and over without really understanding it. Here is what she said: “Viviane who wanted an exclusive love of Merlin, captivated him at first at the fountain of Youth, rejuvenating the old druid, she then imprisoned him for eternity in a glass tower.”

It’s succinct, it’s clear, it’s straightforward but it’s completely false. This macho and misogynistic version was peddled on purpose. But it cannot make us forget the prominent place occupied by women in the 6th century AD.

In the 50s and 60s, Denis de Rougemont made himself known through a book, I was going to write a manifesto, which turned a whole era upside down. First published in 1939, Love in the Western World,  had the effect of a paving stone in the duck pond. They could not believe that a man betrayed the male cause by raising a statue to the ladies of old times. Their heirs still haven’t recovered.

Apology of free women, liberated as they said in the 80s. Devils who pervert youth by promising their buttocks. This is what the Fachos machos are wrong. There was no sex in love classes. Or so little. The whole trick is there: play on the young man’s desire, make it go up without consuming, go through stages from the sexual chakra to that of the heart, and climb again, and again.

Merlin has lived the best years of his long and terrible life. With Viviane, the moments counted twice.
His first name breaks down into Vie Vie Ahn: doubly life, and the title of ancestor. See on the subject The golden tongue and The archetypal language.

Another time, when it sounds good to me – yes I am like that – I will tell you the true story of Merlin and Viviane. The Lady did not take the old man into her lakes. He did not die by spell. She didn’t do anything against him. He does not sleep in his glass crystal at the bottom of Lake Comper. It was there that Merlin, to please his beauty, had built a sub-lakeside city for her, made of glass palaces and diamond cupolas. This earned Viviane the beautiful nickname Lady of the Lake.

These two lived the Thousand and One Nights. A strong passion and desire brought them to heaven on earth, yes I know it exists, I am going too. It’s better than here, especially now. Merlin did not die in Comper. He left on a balmy summer afternoon in the middle of winter. Her body fell asleep in the ivy arms of her fairy yesterday.

-The following to live is for her here. The time allotted to me ends today. I was buried near another magical source, the Fountain of Youth.

Viking in Normandy, I left at the said time for the prairies of the Great Spirit. Hear my laughing heart, be blessed, my darling young one. The gold of the sky which flows in your veins chains the gold of the depth to your steps. Don’t go. 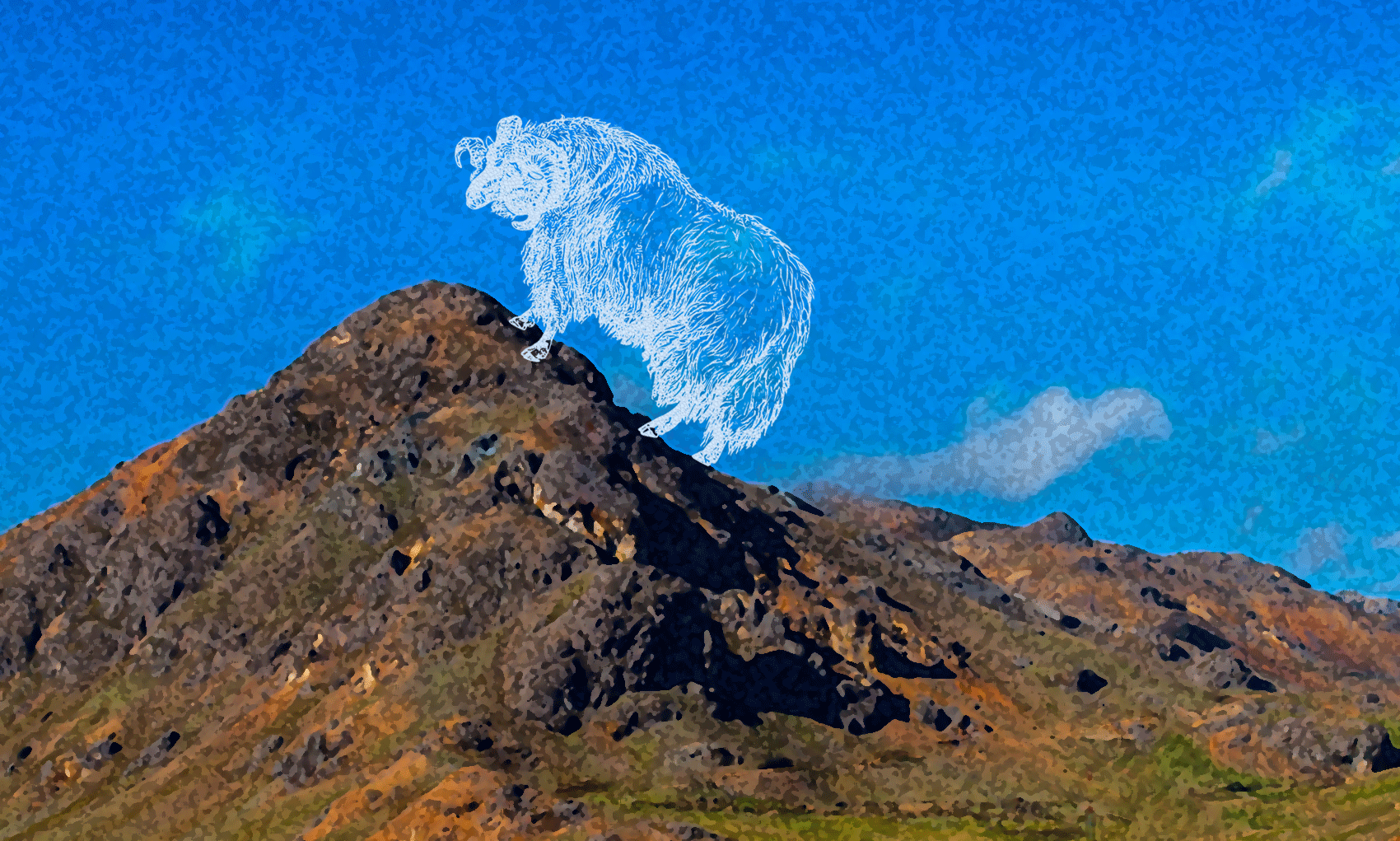 I didn’t want to tell you about the punchline, it’s done, that’s it. I’m not the one writing.

For something to be worth saying, it has to be good, useful and true. All three, and in that order.