“Homer is a plagiarist, or rather a jester who, to entertained his contemporaries, did not hesitate to distort the powerful saga of Ram to make his laughable Odyssey.” (source)Lao Surlam, Morceaux choisis

In a few well-chosen words, that is what many prominent Greeks thought of the bard Homer, who was but a lyre player, honkey-tonk singer, regular barfly with retsina wine drinkers. The great Plato is not kinder to him: “In the Republic, one of his major works, he spoke vehemently against Homer and Hesiod these dangerous storytellers who distort the historical truth.” (source)R. Charroux, Le livre du mystérieux inconnu  Plagiarist, the word is violent. Homer is not one, he only imitated another author whose writings are lost. We only know the pastiche, since the original is still missing.

To be honest, we did not try to find any. No doubt this lost original version was recounting, in the epic and gallant mode of Rāmāyaṇa, the fantastic gesture of global hero that Rama has been. No doubt. But how can be sure? Is Ulysses a Greek avatar of demigod Rama as found in the Ramayana epic? We’ll have to find it one day. Meanwhile, the parallels between Ulysses and Rama deserves attention. While Ulysses was invented by Homer, the figure of Rama was told by hermit Valmiki in his Rāmāyaṇa.

The Rāmāyaṇa begins with the complaint of Devastated Earth: in the form of a cow,Earth puts God Vishnu in front of his responsibility.This evokes the planet destroyed by the flood while the people of the earth were blaming the gods. The cow marks the origin of agriculture and livestock.

The Rāmāyaṇa chronicles the birth and upbringing of Prince Rama who is the seventh incarnation of God Vishnu. He grew up, conquers his wife Sita. Then comes the exile of Rama, the abduction of Sita, her release and the return of Rama to the throne.

When he is deprived of his father’s throne although he is the rightful heir, Rama is exiled from Ayodhya, accompanied by Sita and his brother Lakshmana.

Then Sita is kidnapped by the demon Ravana who trapped her in Lankâ – generally identified with the island of Sri Lanka, but some authors like Louis Frederick placed instead on a group of seven islands – perhaps Heptanesia of Ptolemy – which were the origin of the city of Bombay. These assumptions do not satisfy me. In my view, we are facing a relocation. 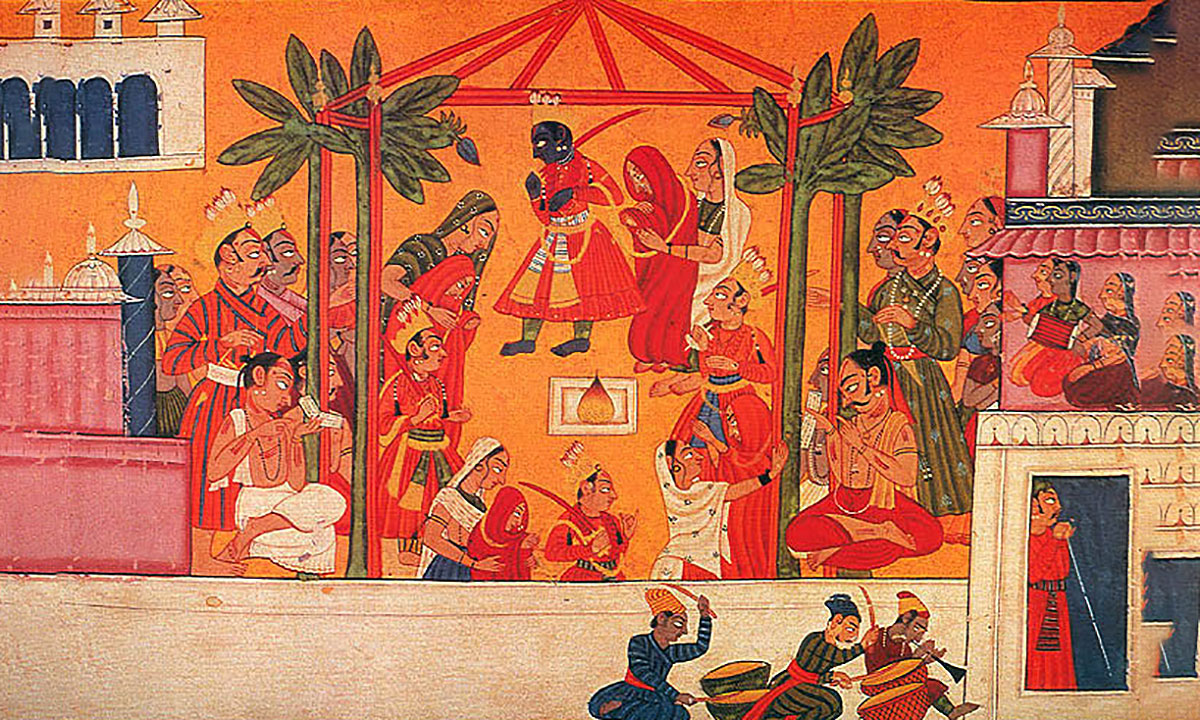 This part of the original story does not take place in India, but in Celtic Land where Ram was removed from the throne by his father Shining Face Lugh. Ram came from Hyperborea and first settled in Celtic Land of Northern Europe. Valmiki never mentions a foreign origin to Ram: in his time already, details of foreign childhood of Rama had worn off, or had been relocated to India.

Many legends have been relocated by many peoples. All Indians now believe that Rama was born at home. The whole world seems to agree. We know that it is not.

Rama and his family are precisely the mysterious contribution of Celtic blood that makes today India a racial enigma, and that brought white descendants of Rama to form a racialist or racist caste, that of Brahmins. Which is the opposite of the philosophy taught in the past by the great Ram.

Now let us pick up the thread of Rāmāyaṇa. After a long and arduous search, Rama freed Sita with the help of Hanuman, chief commander of apes army. Ravana was killed by Rama who then gets the throne and ruled his kingdom with great wisdom.

Rama’s lieutenant Hanuman is supposed to be ape god, able to talk and to pilot a vimana. Human language is impossible to apes and monkeys but quite normal to Homo sapiens neanderthalensis, ie Neanderthals. Hanuman was actually the leader of a Neanderthal clan loyal to Rama.

Other Neanderthals were against him, as Ape god Salva demolished with Rama’s nuclear bombs. Ifever you are surprised to hear about so recent Neanderthalians, remember the scientific position has greatly evolved on the chapter recently.

Later in his Indian empire under a wild fig tree, Emperor Ram received enlightenment. Thus he went directly from the Force to the Fool. Idiot Buddha, he retired in Tibet and founded the Lamaist religion fifteen centuries before historical Buddha Sakya Muni.

In the adaptation of Homer, Rama is Ulysses – a married king who abandons his wife Penelope, first throughout the campaign of Troy, and then for many years of wandering, from bed to bed, from heart to heart and from bad to worse. The Greek people have a good laugh, the sages blanched. For those who had kept the memory of the great Ram, ridiculing its fascinating and terrible saga was a crime, at least a serious lack of taste. The memory of the great Ram was already fading among the Greek.

“On 16th April, 1178 BC, a solar eclipse occurred and is believed to have marked the return of Odysseus, legendary King of Ithaca, to his kingdom after the Trojan War. He discovered a number of suitors competing to marry his wife Penelope, whom they believed to be a widow, in order to succeed him. He organized their slaying and re-established himself on the throne. The date is surmised from a passage in Homer’s Odyssey, which reads, “The Sun has been obliterated from the sky, and an unlucky darkness invades the world.” This happens in the context of a new moon and at noon, both necessary preconditions for a full solar eclipse. Further clues from the text included reference to Venus being visible and high in the sky six days before, and the constellations Pleiades and Boötes both being visible at sunset 29 days before.”  (source) 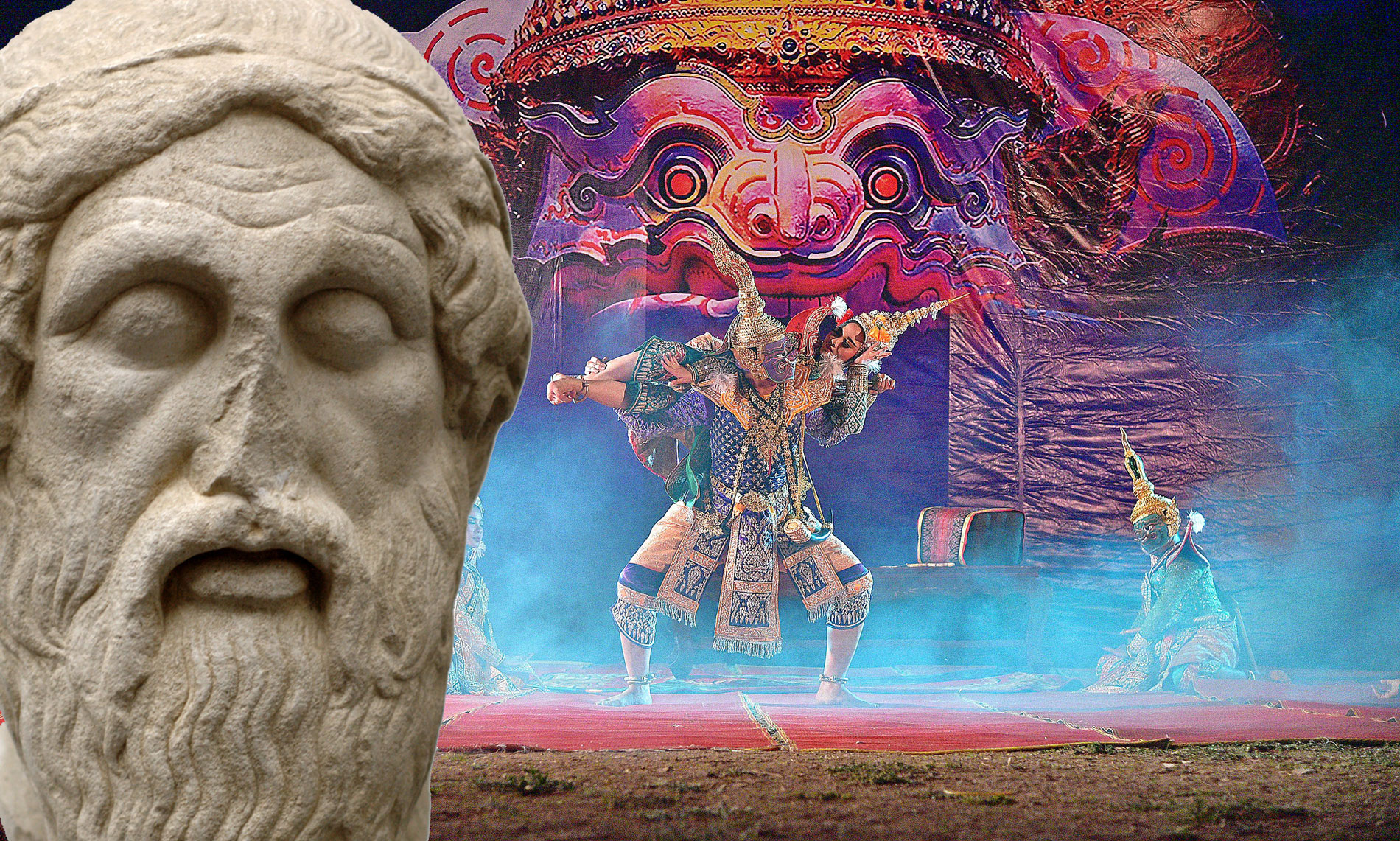 This odd text contradicts itself from the second line. How could this eclipse marked the return of Ulysses, called “legendary king of Ithaca”? If Ulysses is legendary, why look for vain traces of his existence? Ulysse has replaced Rama, and this eclipse marked the sudden return of Ram after his wars of conquest in Asia. Rama found his Western Kingdom in the hands of unworthy suitors. He resumed his throne, restores ramaic order, and returns to manage the other kingdoms that comprise his global empire, ie Egypt and Middle East, India and China, Central and South America.

But Rama was undergoing his curse. “Your name will no longer be” Sheikh Abdel Razek pronounced in an underground room of the Great Pyramid.

When the eclipse occurred, everybody knew Rama. But from the time of Homer, forgotten the many, he was known only by educated people.