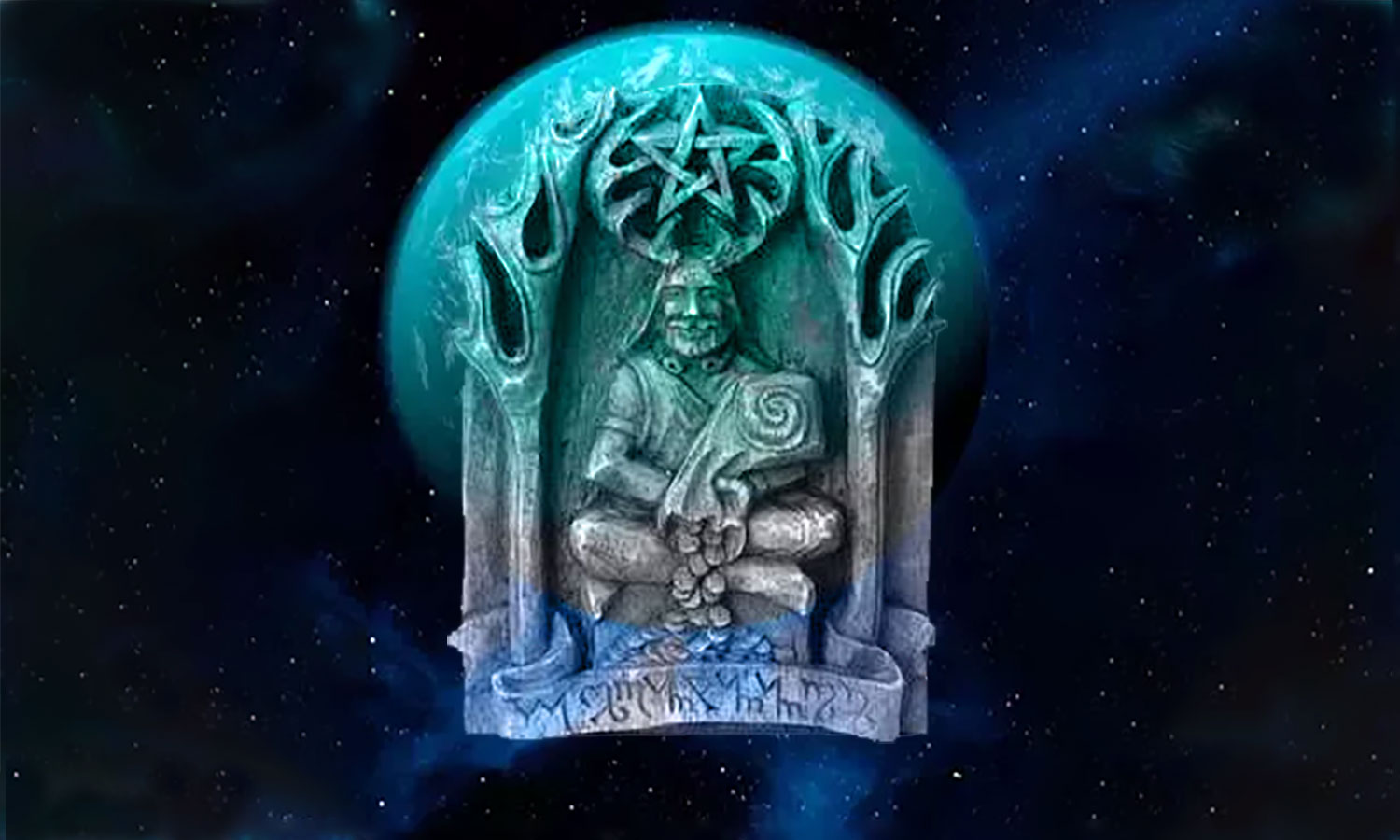 He is a god about whom we do not know much, a Celtic and Gallic god, and probably more ancient. His horns and his surroundings made him a host of woods and forests. But that requires further investigation. Unfortunately the Gauls did not write their language, nor the ancient Celts. We are therefore reduced to iconography to know it, and to conjectures to expose it.

Keep it easy, the Akashic records are not made for mad dogs, I intend to bring back some golden apples to you, from the pretty garden of the Hesperides. As usual. I check my temporal auto-connect, easy, it’s plug and play.

Cernunnos is not a bull god like Thor nor a ram god like Ram. Its horns are those of the deer, as its name already indicates. Wait and see? Horns? For the deer we speak rather of antlers. And all of these antlers constitute the antlers of the deer. Now listen carefully my dear English readers. In French, my language, the antlers of the deer are called Ramure. So you can understand the following.

To break down the word according to the original language, little effort has to be made. Ram Ur, the god Ram who comes from Ur, horned god like the sons of Thor the Taurus and Hathor the Taure. Ram gods and Bull gods, the two clans of horned gods, eternal rivals, tireless competitors. Or heavenly brothers?

The antlers are antennas. Like the mini branches of the Devil and his imps from the Tarot de Marseille. These antennae indicate that the horned god has a special connection with the gods. From these, he holds powers that the others do not have. Is he cherished by the gods, or is he their victim? Having such powers comes with heavy responsibilities. We must be available to those who need it. We do not have the right to refuse help to deserving people. But how to define them? How to ward off the impostor, the psychopomp, the cuckoo, the madwoman, the ghoul, and all the other deviations?

The antlers have this sublime name to remind us of this profound truth: no power without duties. No greatness without bondage. The impeccable warrior is made to serve, not to crack down. Some police officers should remember this. Vigilance, tolerance, assistance.

Cernunnos (or Carnunnos, Cernunnus) “The Horned” is the god of virility, wealth, woodlands, animals, regeneration of life and the guardian of the gates of the other world (Annwn). It seems his name is more of an epithet than his real name. Cernunnos wears deer antlers and a torque. He is often accompanied by a ram-headed serpent and a deer. (source) 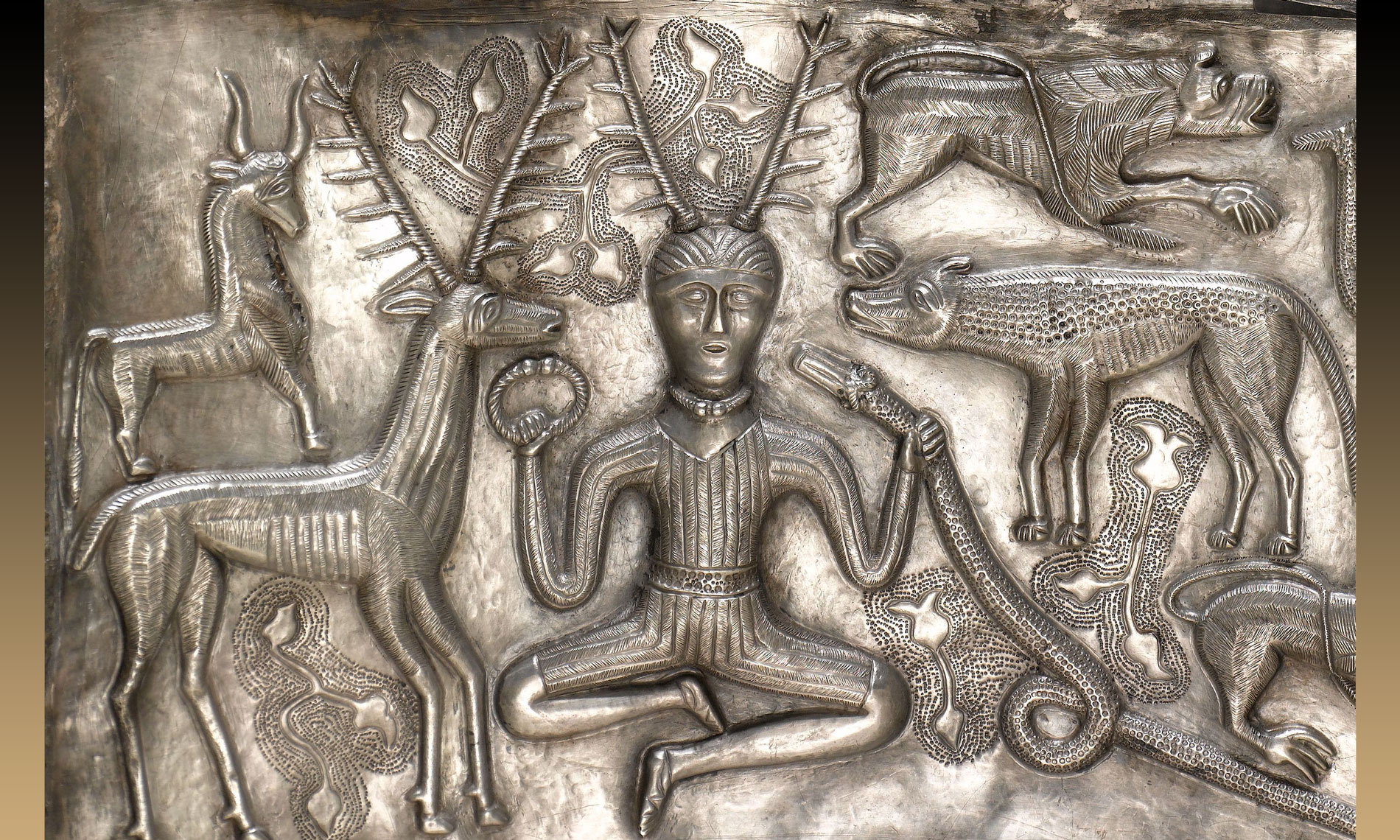 This is why Cernunnos embodies all the values ​​of life, positive, enjoyable, natural. If he keeps the doors of the other world, it is by indulging in the natural pleasures of earthly life. Until drunkenness. In this sense, he resembles Bacchus – Dionysus. Those who imitate him will have the privilege of seeing the doors of the other world open wide before them. Hyperborea in its splendor will welcome them to the Eternal Stay of the Winners. Make no mistake: these winners are unknown to rings, racing, fair or battlefields.

By a patient Jihad exercised at every moment on themselves, emptying, cleaning, purification, check, cleaning again, check again, emptying again, tireless repetitions over endless years, through failures and discouragement, shaken by the recurring storms of the wounded ego, panting, more dead than alive, they finished their obstacle course. They are true warriors of light.

It will happen to you too. Don’t lose sight of your goal. Always be you, no longer make any concessions to the times, to customs, to bleating morons. You are a thousand times better when you love. Stay in the center of yourself. Flee the pale nights. Bream. Lent. Theme parks. The anathemas. The supreme evil. Schemes. The items. Spring rolls. The second. The antepenultimate. Baboon Wakatepe.

Dying is nothing. It’s getting old that kills. (Lao Surlam)

The ram’s-headed snake is one track that I wish fruitful. Who says ram says Rama, and my little finger adds that Cernunnos the Deer could well be a rival of Rama the Ram … Or a successor?

There is in Cernunnos a benevolence, a bonhomie which can be read on his features. Rama does not express this simplicity. He is orientated. Internalized. He seems very far from the deadly contingencies and the little worries of his ex-fellows … Cernunnos is closer –too much perhaps? A loving father, a companion, a strong guide, a comforter, an easy protector who helps you relax yourself. God the Father? Another avatar of Zeus, Elijah, Yahveh, Adonai, Elohim and other unique gods? 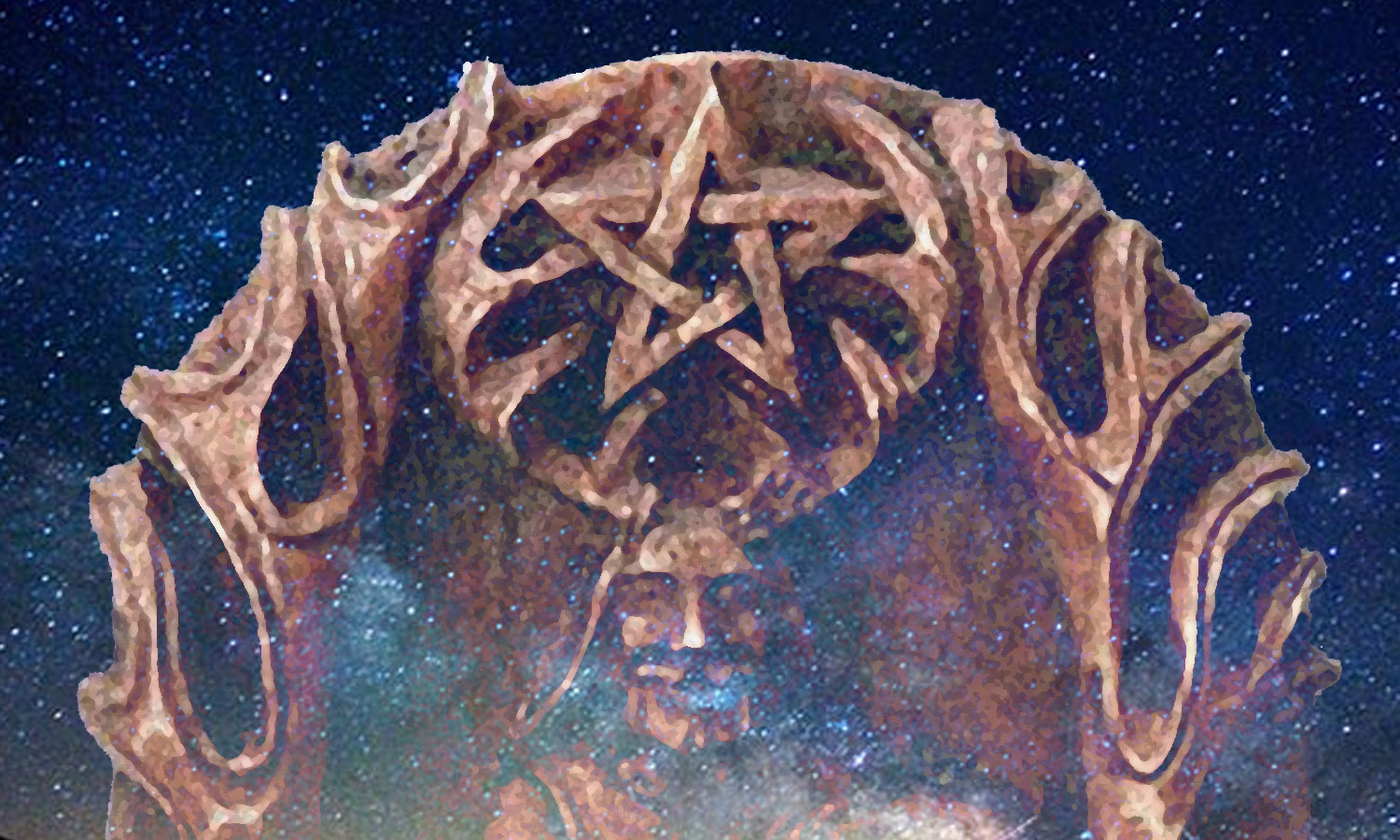 When Cernunnos smiles, he holds the keys to Heaven. Guardian of the other world, he carries the door. Through it the human reaches greatness. See the shape of its horns. They espouse the pentacle, which usually means magic. Here the pentacle tells us about the planet of the gods. See the five points of the Star. They represent the four island-continents of Hyperborea. And the top point designates the fifth continent, Mount Olympus, the sacred mountain, Amarnath, the abode of the supreme gods.

In Greek mythology, Olympus is the home of the gods of the gods, Zeus and wife Hera – in whom it is fitting to see the true patroness of the whole gang, ie the Great Goddess. Out of chauvinism, the Greeks relocated Olympus to their homeland. No need to blame them particularly. These relocations are systematic. Each country wishes to appropriate the legend by situating it on its territory. Thus Great Britain and Britanny ie Little Britain have been fighting for centuries for the location of the tomb of the Merlin. In Dark Forest ie Brocéliande? In Glastonbury? Considering that we are not sure of the historical existence of Merlin, neither of Arthur, nor of the Round Table. So finding the tomb of an obscure magician is a joke. Find Jesus’ tomb first.

Cernunnos (or Cernunno, Kernunnos) is by no means a devil or a demon. He is a Celtic, and possibly even Preceltic, god whose name means “Horned.” And it is precisely his aspect of a horned god that, following Pan, made him assimilate to the Devil by Christianity. We see, of course, in Cernunnos, a “Lord of the Underworld”, but this infernal quality, as in the case of the Greek god Hades, for example, must be taken in the sense of “world of the dead” and not as the synonym of ‘a realm of perpetual penalties as Christianity conceives it.

Cernunnos is also a Master of animals, a King of the forests, a god of the Hunt who embodies the renewal of Nature: don’t the harvests come from the underground domain where this formidable god reigns? He is also a god of magic. In any case, Cernunnos is an important divinity who is sometimes identified with the Dis Pater, that is to say, the Sovereign of the underground universe who reigns over the world of the Dead (which is buried) and who patronizes fertility (grains germinate in the soil). (source : triskele-elkablog.com)

I chose this excerpt from the blog cited as a (source), I could have chosen another one. This one is far from the worst, sounding quite sincere and moderate. Apart from a disturbing preference for dominant thought from the old paradigm. I am engaging in this bias detection exercise to demonstrate this to you: no need for censorship, no need for conspiracy, everyone does very well to censor and plot on their own. It has become a game, a hobby, a pastime which hurts the truth more than fourteen encyclicals. That is to say.

Celts make Cernunnos the guardian of the other world? At this trigger word, the bias intervenes: other world = hell. So Cernunnos is the devil. But our author just said no. So a pirouette: this is not about Christian hell, with the flames, the torture and everything. Cernunnos protects the entrance to hell. Still. This restriction does not eliminate the misunderstanding. By dint of juggling with words whose meaning is imprecise, the author is a little lost, like all of us.

Let’s be clear. I think Cernunnos is the gatekeeper. He presides over the supreme initiation: the discovery of the other side of the scenery. The entry into the astral. Another world where people are less visible, less material, but more present since they are always with us. Space and time do not exist there, they are reserved for the world where we are bored. Another world where wonder takes precedence – which is rare here.

No, Cernunnos is not the god of death, he is just the opposite: the god of life. My proof? He sponsors fertility. Death is fertile only by giving life. Aware of the contradiction, our author hangs on by his fingernails: he is the god of the world below, therefore of the crops (the grains germinate in the ground) he tells us in parentheses. Another great balancing act without a net. Anything that could make him tilt, put him on the track, he ignores and explains without flame, without panache, without vista. Fascinating work of mental jamming. And we are surprised that our children are pissed off at school! Those who like it worry me more … 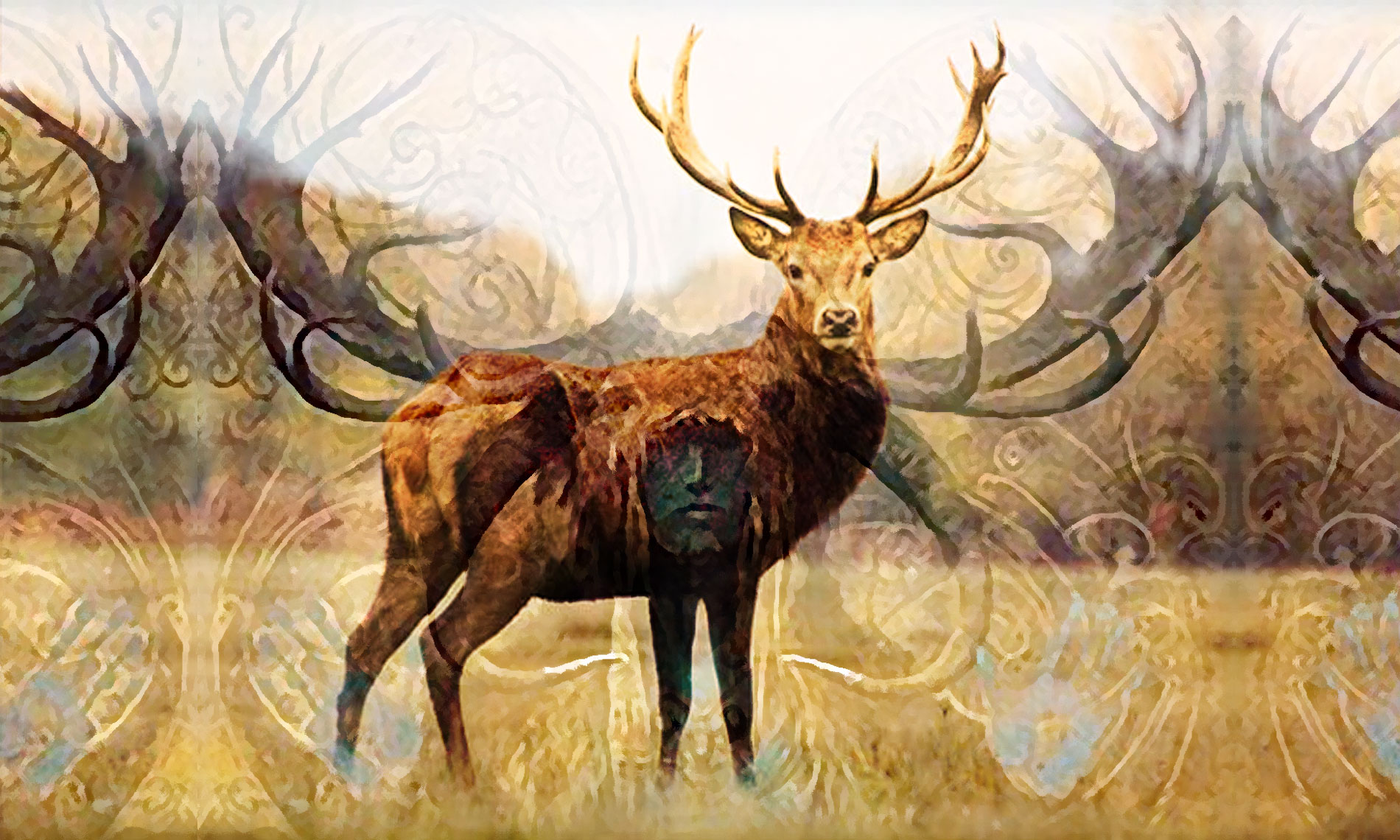 Now the final question: Is Cernunnos heir to Rama? Is he more ancient? To try to get an answer, one can scrutinize his name. What does Cernunnos mean? By questioning the original language, to which German is very close, we get Kern Nun Aus = heart / center, now, out. What I could interpret as: Cernunnos was the One, the chief God – maybe this namerepresents a wholme people, as we have seen before with Lugh or Enoch. He is the Kern. And now the Kern is gone. Out. The secret meaning of Cernunnos could be: Former Gods are gone now.

Another conclusion: as an ancient god, Kernnunos automatically becomes the devil of the new religion. But Rama the horned is likened to the devil also by Western traditions. These two are so alike. Would they be just one person once again? What do you think?

Why not Kernnunos, brother of Rama? The Gaulish version of Cuchulain? Cuchulainn Kernnunos, a remarkable identity. As plausible in my opinion as that of Cuchulainn and Kukulkan –ie Quetzalcoatl for the Mayas.