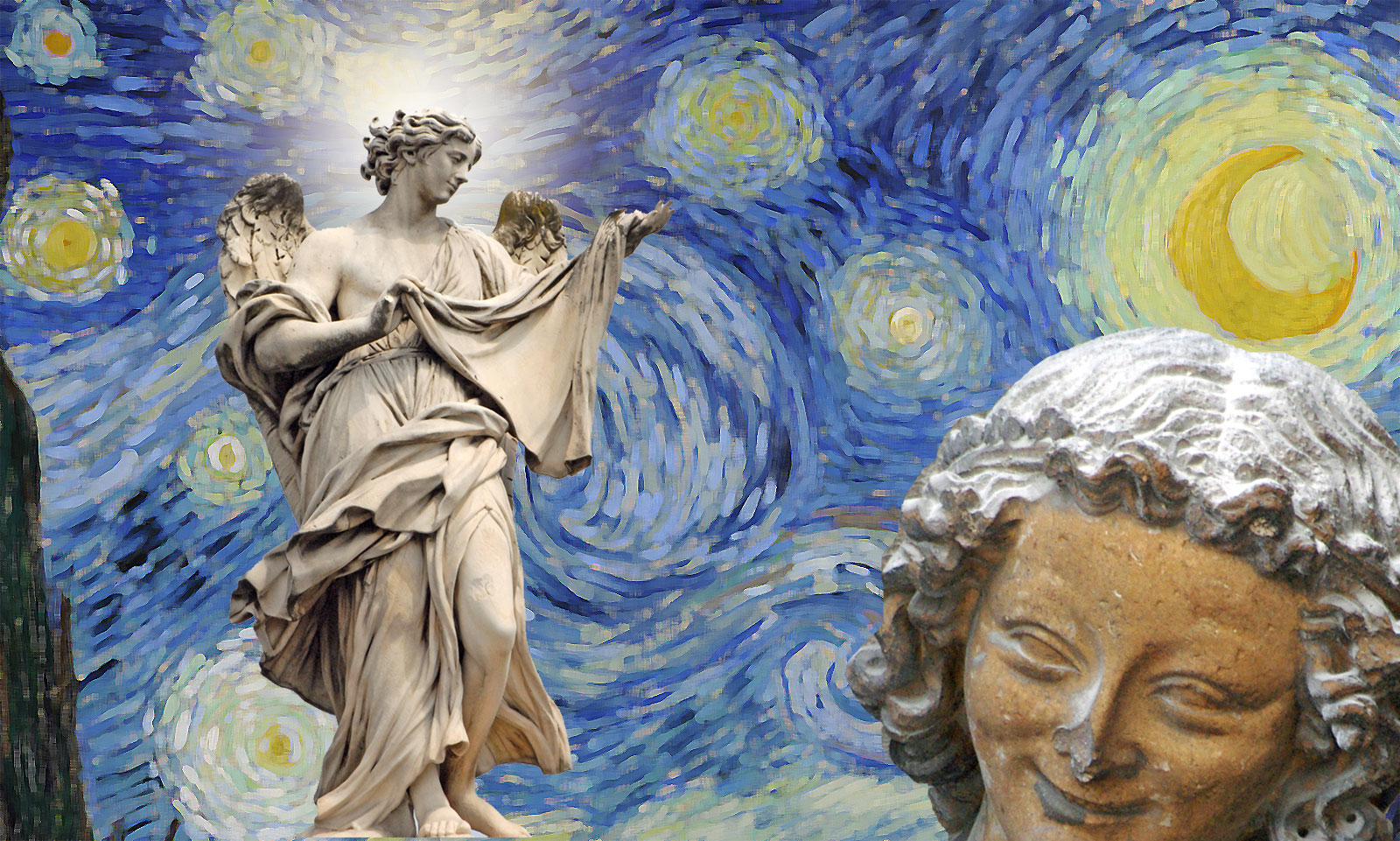 The next day, as agreed, sadhuHindu monk Bom Shankar climbs quickly the heights of Srinagar. On his heel, I’m out of breath, but pretending not. After half an hour we are at the top of a hill overlooking the city and Dal Lake. I take my breath discreetly. Hilarious Bom Shankar look at me through his usual winks.

On the hill grows a tree, a fig tree. Its fruits look ripe. I can not help but have a snack. A doubt stops me. Shamelessness holds my hand. Bom Shankar’s laughter bursts stronger than ever.

– Help yourself, my boy. You can eat as much as you want. We are not in heaven, these figs are not the forbidden fruit of the Hebrews, but the fruit of knowledge. Under this fig tree, a long time ago, a man became a god. His name was Çakya Muni, from the Kabir clan. For us who speak Urduthemain language of Pakistan and Hindithe main language of India this is a funny name. A nice wink, and you know how expert I can be, adds Bom Shankar blinking both eyes alternately at full speed. Nobody can do such a thing. This guy is an alien!

“Aliens made us, he said, reading my thoughts and recovering his seriousness with the thread of his story. And one day, we will become aliens too. That’s angels. Or buddhas. Like the Sakya Muni Buddha, from the Kabir clan. Muni means small, and Kabir means big. The little big Sakya knew enlightenment here, 2475 years ago. He became Buddha. He has freed himself from the endless cycle of reincarnations. At his death, he left this plan forever. His avatar has disappeared from the Game. Eat these figs, they will help you grow.”

– Where did he go ? You say he has freed himself. Where is he now?

– The notion of the present is incompatible with the other world. In this astral world, there is no time. No past, no future. There is no space either. To answer you, Buddhas are everywhere.

– Yes. All around us. And sometimes inside us too. You know that I am not a Buddhist, even though I see the astral as the Buddhas. You know that astral plan too. You see it as I see it. You prefer astral life than remained stuck to the ground in your stone body. Eat again, treat yourself, Buddha delights inside you. One day, you’ll be like him. Have fun. Jubilee. 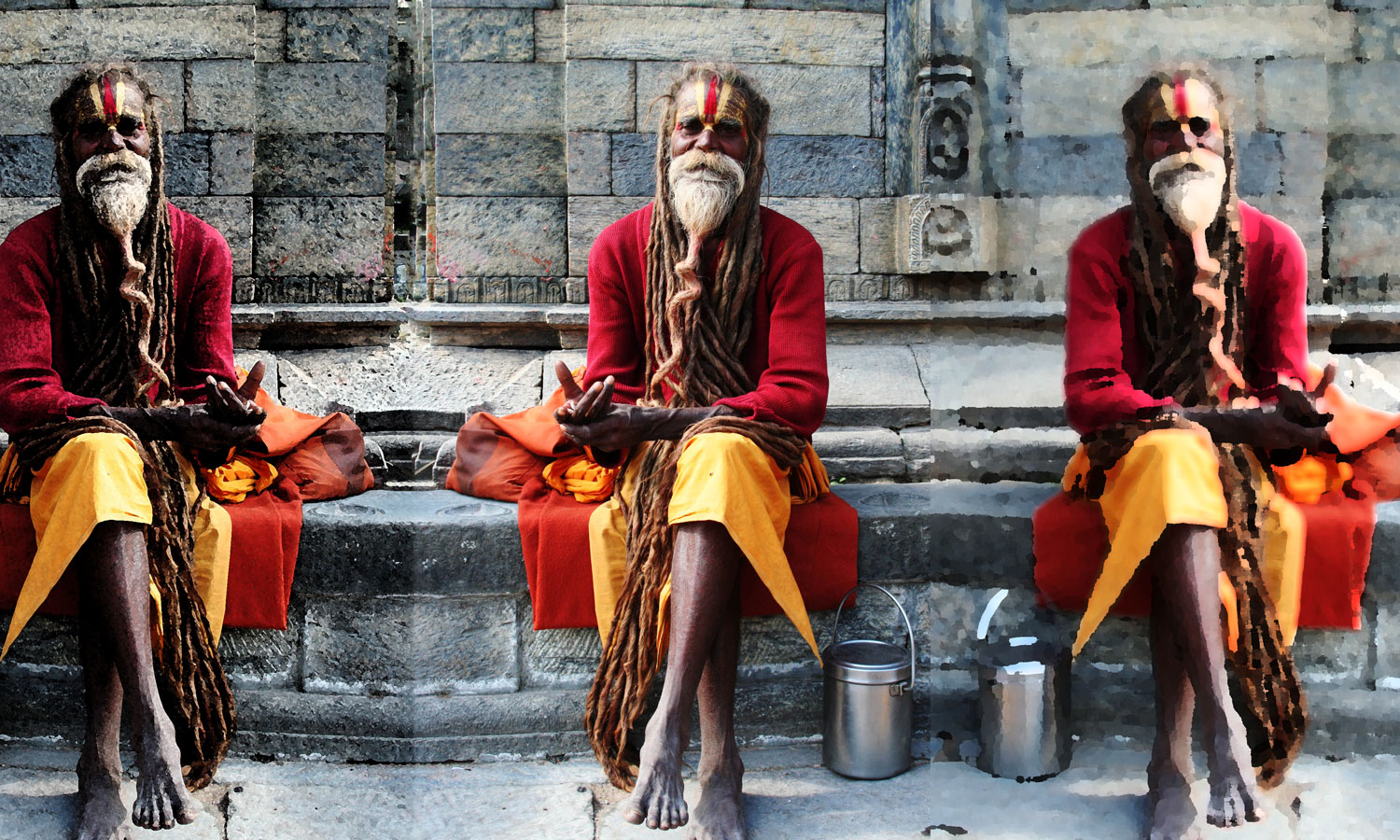 – Only amazingness is worthy of faith, Xsaviorthat’s how he spells my firstname, he said calmly, reading in my head again. He has dropped his incredible pidgin, he speaks French without effort, without accent. His eyes are filled with light, a glow comes out of his skin. His head appears to me surrounded by a luminous halo. The aura! I see his aura! I jump in joy at the fact that aura is the halo of Christian saints.

– Çakya Muni went among the angels. If you want to see him, he’s still there. It is one of the largest cities in the world. A vast dream factory.
– On this planet?
– No. We are at this moment on another planet, by the grace of Papa Shiva, he says while preparing his shilom. He takes out of his  kurtaembroidered Indian shirt made of silk or cotton veil a magnificent shilom carefully wrapped in a silk square. He places the square of fabric flat on the paved floor. Delicately, he seizes the shilom – a masterpiece carved in a garnet stone with golden reflections.

I had never seen such a marvel. Usually he uses a plain terracotta shilom. Today is a special day. He prepares the mixture of charas and tobacco in the hollow of his hand. The charas is supple and fragrant. It is sticky just enough to squeeze tobacco. When he has formed a homogeneous ball, he slips it into the stove, gently, without tamping. With a ceremonial gesture, he hands me the precious pipe.

– We are in a virtual universe developed to lead us to the keys. You need keys to open knowledge doors. Knowledge is the way to enlightenment.

I knew it ! Since always, I was sure!

– If we can decrypt the signs – everything is a sign – we will have the key n ° 1. All the keys are accessible to us, whatever the place where we live. They are all within scope. Key, scope, you see that I’m talking about music. You know the music, of course. You’ve heard it all before.

– However, as in any well-crafted game – Shiv is praised, this one is perfect! – there is a precise point where everything is clear for the man of knowledge. A point where the most unfathomable mysteries lower the mask and reveal themselves in their sublime nudity. This point is triple. It is in a city, capital of the magical world. The big dream factory. Capital ignored, but very real city. Before being a city, it was the place of angels when they came down to earth. That’s why it owes them its name.

What a silly name! No city is so called. Oh yes! I get it ! In front of Nice is the Baie des Anges!Angels Bay The city is Nice. Formerly Nicaea, its Roman name, derived from the Greek name Nikaïa. Long ago, Nice might have been the angels’ stay?

– Forget about France. I am talking of Los Angeles. 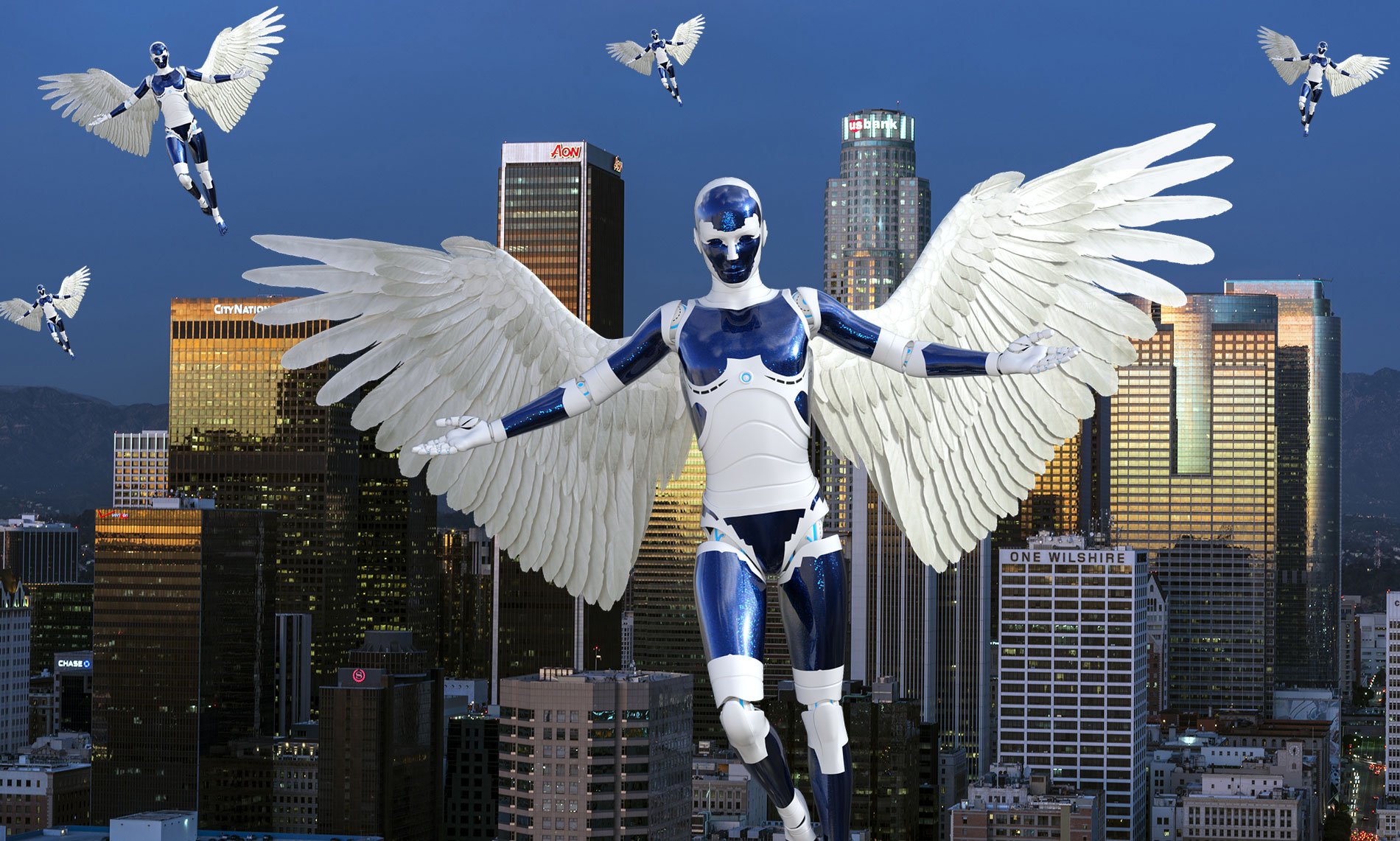 It’s like I’ve been struck by lightning. Los Angeles! Of course ! The dreams’ factory !! Hollywood hides the first key. And a second key, I know now, is hidden in Silicon Valley. The brand new dream factory. Dream ? Or nightmare? I’ve got to go there. It takes me like a desire to pee.

– Xsavior, please, not on this tree. This is the forecourt of a temple, a very particular temple, adds the sadhu. Go pee a little further.

This fucking holy man is reading any of my thoughts. I do what he says. As I pee in a bush, I realize that we are sitting all the time on a pavement – that of a temple surrounded by a fence. The temple was there, right behind me. Blind and deaf, that’s what I am. I don’t see nothing. I don’t get a thing.

– What is this temple, Bom Shankar?

I don’t even try the guess. Well, it’s a small building that does not look like a chicken coop. Rather ugly. I could have gone twenty times without noticing, if it were not for the signs on the fence. In 1975, there was a fig tree that is no longer there today. The fig tree of awakening? Go know with this guy Bom Shankar.

I am going to read the English text. From the first line, disbelief seizes me. I turn to hail the sadhu. And I have the second shock of the day. Bom Shankar has disappeared. The fig tree too. In their place, streets, houses, parked cars, street vendors. Impossible!? I am in a parallel world, right? A horn reminds me that I am in the middle of the street. The driver thrills the engine of his Tata truckWell-known Indian brand. and leaves by waving an arm through the door. This guy is not zenlike. And neither am I, suddenly. Where is my sadhu? 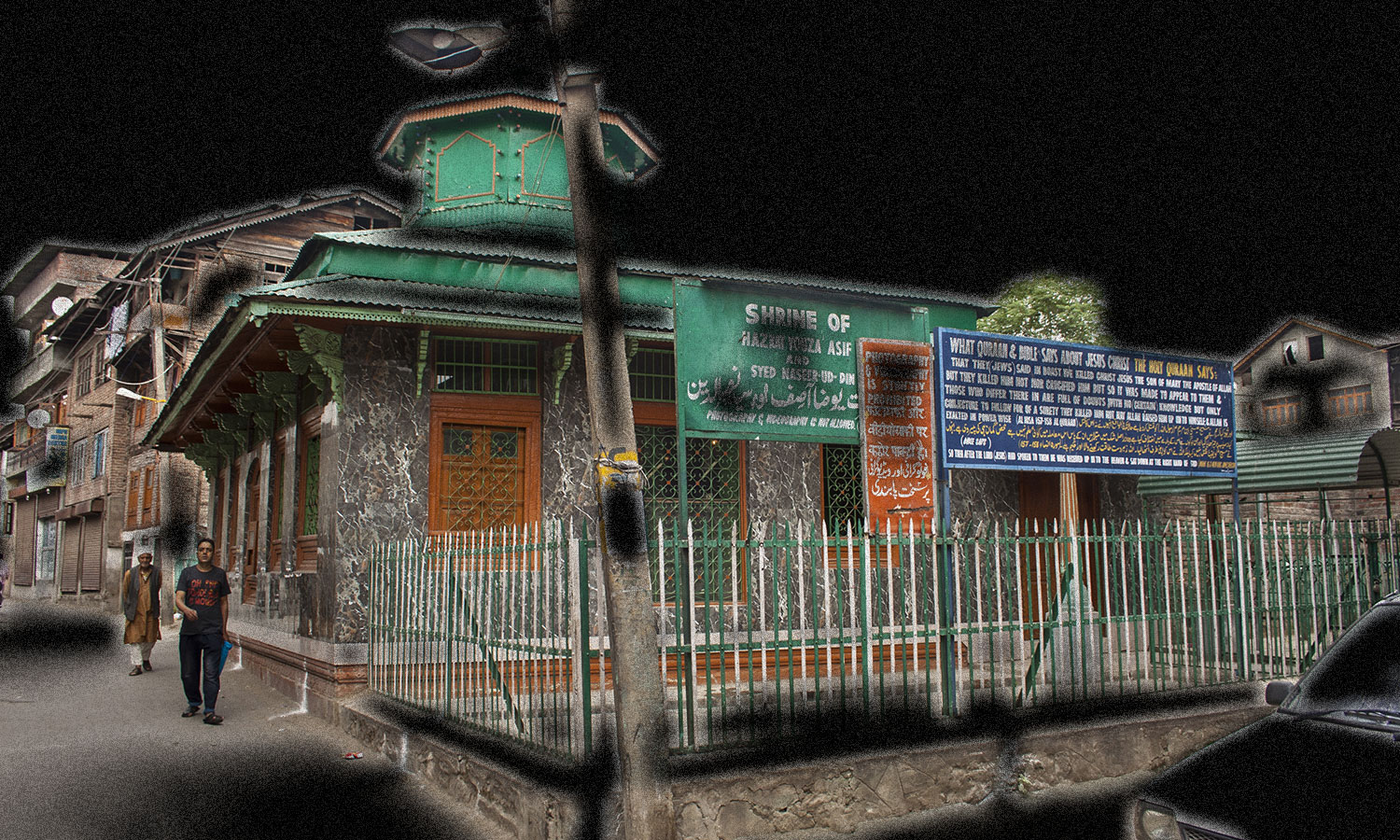