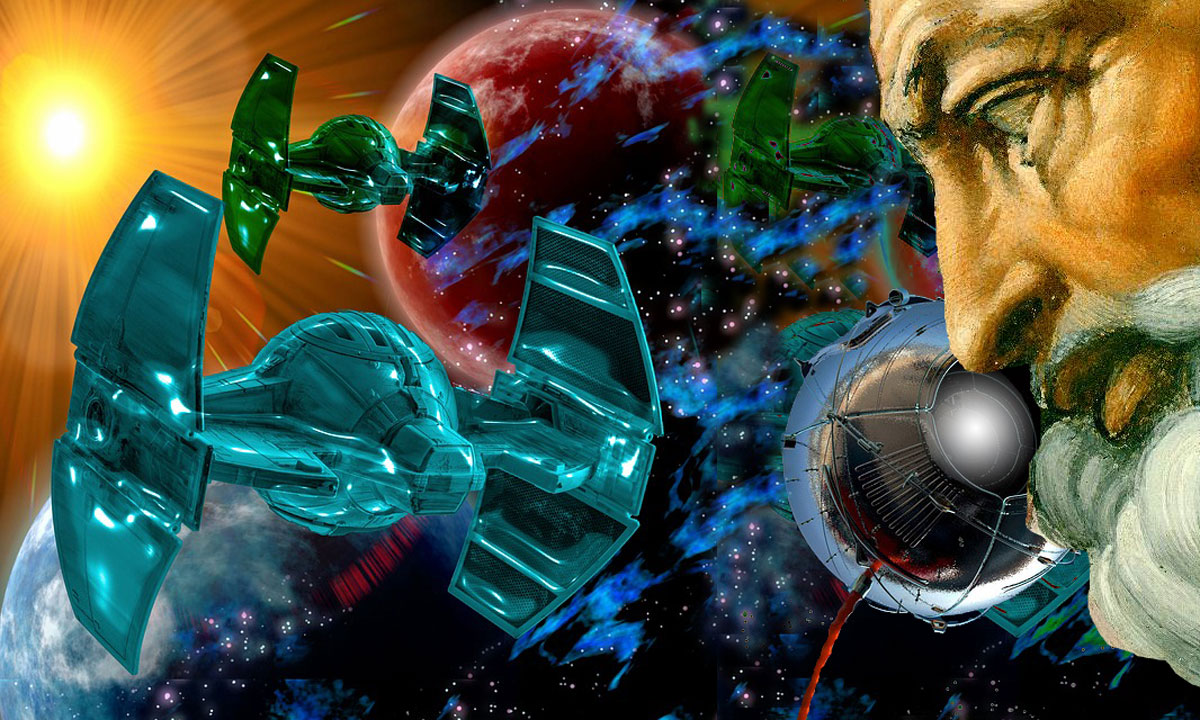 “I, Enoch of Alcor, stars visitor, I give you thanks, O Hathor, O Mother of all life! Humbly, I kiss your small foot, I touch your divine foot, I put my lips on the softness of your living foot. Proudly, I implore you to rise to the rank of captain in your divine fleet.

To obtain it, according to the most famous custom of wisdom that reigns over Ursa Major and all the suns it administers, I composed this opera. O Mother, inflexible panther, ultimate defender, object of unique desire and subject of total existence, listen to him, love him, then give your verdict in my favor to make your servant the happiest of men! “

All the audience, very numerous and upscale, utters the sweet cooing of satisfaction that is uttered in the gods under such circumstances. When calm returns, the Goddess is standing. In the center of the vast amphitheater, its throne dominates the orchestra pit where musicians already give their instruments while the servants have the scores on the desks. Hathor reigns over the audience as she reigns over the Empire. Standing, his dominance is all the more obvious. So, immense, his iron imprint imposes the gold of silence. She says :

“A man you’re no longer, Enoch of mine. You’ve lived 365 years in the skin of a human, and at the age of 65 you’ve added to Apple, who gave you a son, the great Melchizedek of Armor: When this son was 300 years old, your trials at home being over, you received your new task: to recover the whole memory of all that you saw at home, you did it. second part of your life, under my governance, oh my son, you came to Alcor shining on the natal planets of the gods, in this constellation that you name Ursa Major, the Big Dipper.You have finished your classes. ready to become captain and put on the cardinal’s purple, as the elect of your world will wear in Rome, many years from now.

But you, will you see that? How old are you ? No one can say it. Melchizedek is dead here more than one eon. As for you, will you die some day? Will you live forever? I do not know yet. Your efforts may make you the god you can be. It is also possible that this great work is your ultimate failure. Everything will be played here. Curtain! I’m all ears.”

The singers rise from the bottom of the starry space. Hands in conch, they pick new stars. Sweet music, almost lullaby, Andean flute.

The choir: Order and beauty are there Luxury, calm and sensuousness

The chorypheus: There was nothing, they were there already. In the blue night, there was only them.

The infinite night is torn apart, a brighter star dominates the scene. The rhythm accelerates, djembe, drum, and barrel of brent.

The chorypheus: Thus was born Alcor at the dawn of all life.
Crescendo. Electric violins, explosion that zebra black. Din.
The choir: Order and beauty are there Luxury, calm and sensuousness

The chorypheus: The sublime beings of the Galactic Heart had wanted it perfect.
Cimbals, gong. Tintamarre. The drums in the Bronx are shaking the floor and the walls.

The chorypheus: They populated it exceptionally. They created the most beautiful girls, the bravest warriors …
A silence falls and continues. The ticking of a clock becomes audible and goes up again, like Pink Floyd.

The chorypheus: … the greatest scientists, the purest artists: nothing there but order and beauty …
Wake-up alarm clock. Then nothing, like a long curly silence. And, in the distance …
The choir: Order and beauty are there     Luxury, calm and sensuousness

In the extreme sweetness of the song, while the audience is already rising for the first intermission, a violent explosion reduces the scene to ashes, while human and divine debris are flung into the air, pieces full of flesh and members awful. The room is won by panic. 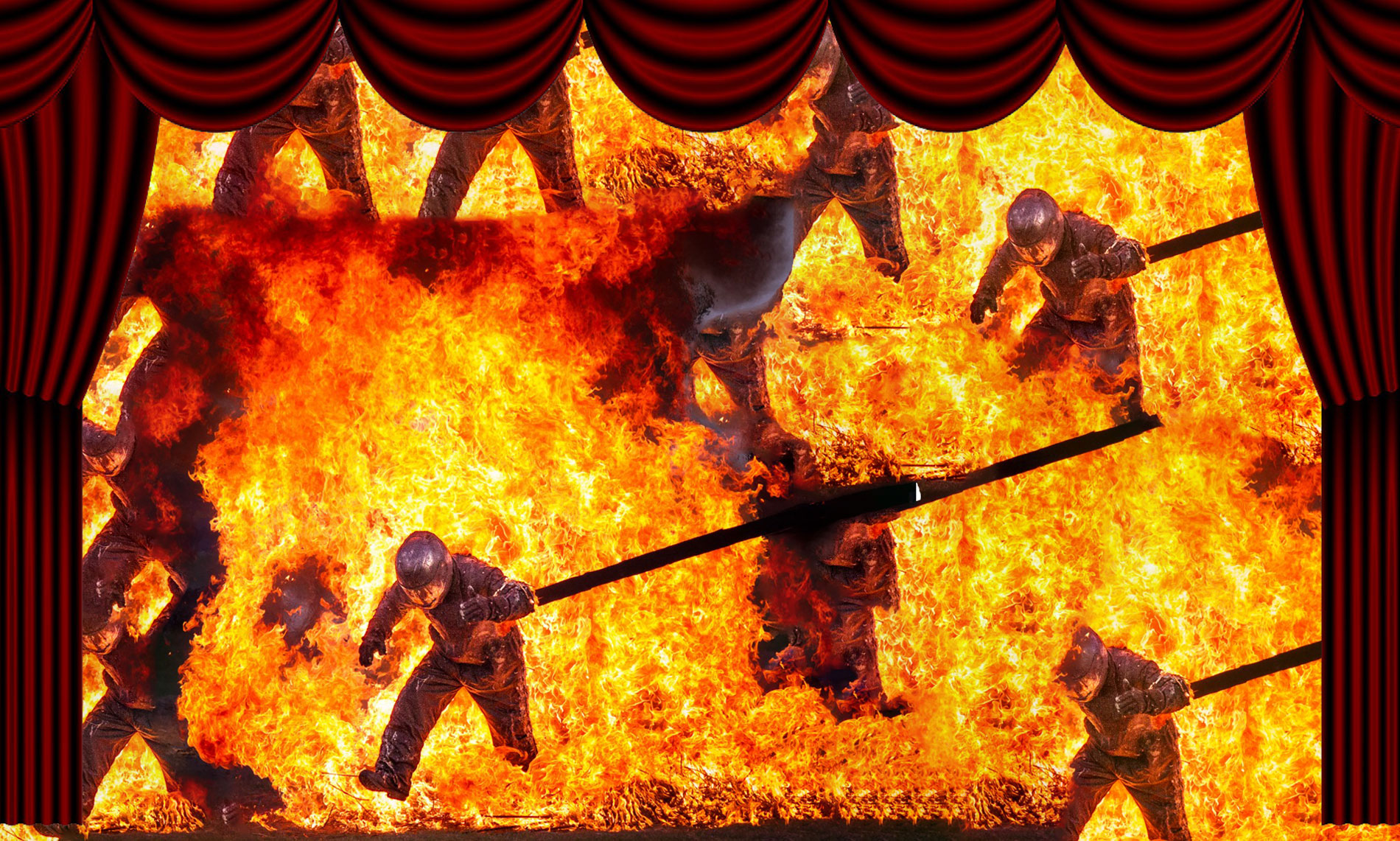 The public calms down when three pretty pépettes begin to distribute cold drinks and ice creams. The illusion was realistic. Everyone takes his place in good order while the curtain rises on the second table. Suddenly, without warning, large nets fall from the hangers that imprison the pretty openers. In nets that go back, we see wagging legs tapered and tanned arms. Then the nets gather above the stage and drop their loose peach on a foam trampoline. While the girls bounce gracefully, their tutus and their beautiful attire disappear, and there are three beautiful all naked that line a platform in the middle of a market.

The chorypheus: Now it’s time to tell the mourning of the beautiful days.

Lancinante, the chant of the coryphaeum is accompanied by rolls of drums followed by brushes on the snares.
Lizards, iguanas, lizards and other reptilians rush to the market place. Noise of crowd, laughter, obscene chuckles.

The choir: Heavy to whom only fears oneself
Slaves auction is starting, girls got heavy looks, palpations, pinches by concupiscent lizards.

The chorypheus: Autumn, after so many winters, here comes back the circular time.
In fact of music, one hears only the wind.

The choir: Heavy who only fears oneself     Sharp to whom is waiting for no one help

The three girls are embarked under the arm of brutal giants. We see only gambettes and round buttocks that flutter.

The chorypheus: All things being planned are now fulfilled, so are many others.

The wind whistles in the shrouds of a pirate ship that scrolls in the background, on a sea of ​​clouds.
On a rock whipped with foam, a human sacrifice is being prepared.

The chorypheus: The only me, lonely soul, with no friend nor company.
My gray head and me, up to memory, to the haven.

The wind bursts into a storm, sinister creaks, insane waves, the ship sinks into the raging sea.
An excessive tentacle comes out of the raging wave. On the reef, the poor girls start screaming.

The choir: Heavy who only fears oneself     Sharp to whom is waiting for no one help    Deep doom for all: our three people
The three parks are devoured by a sea monster. 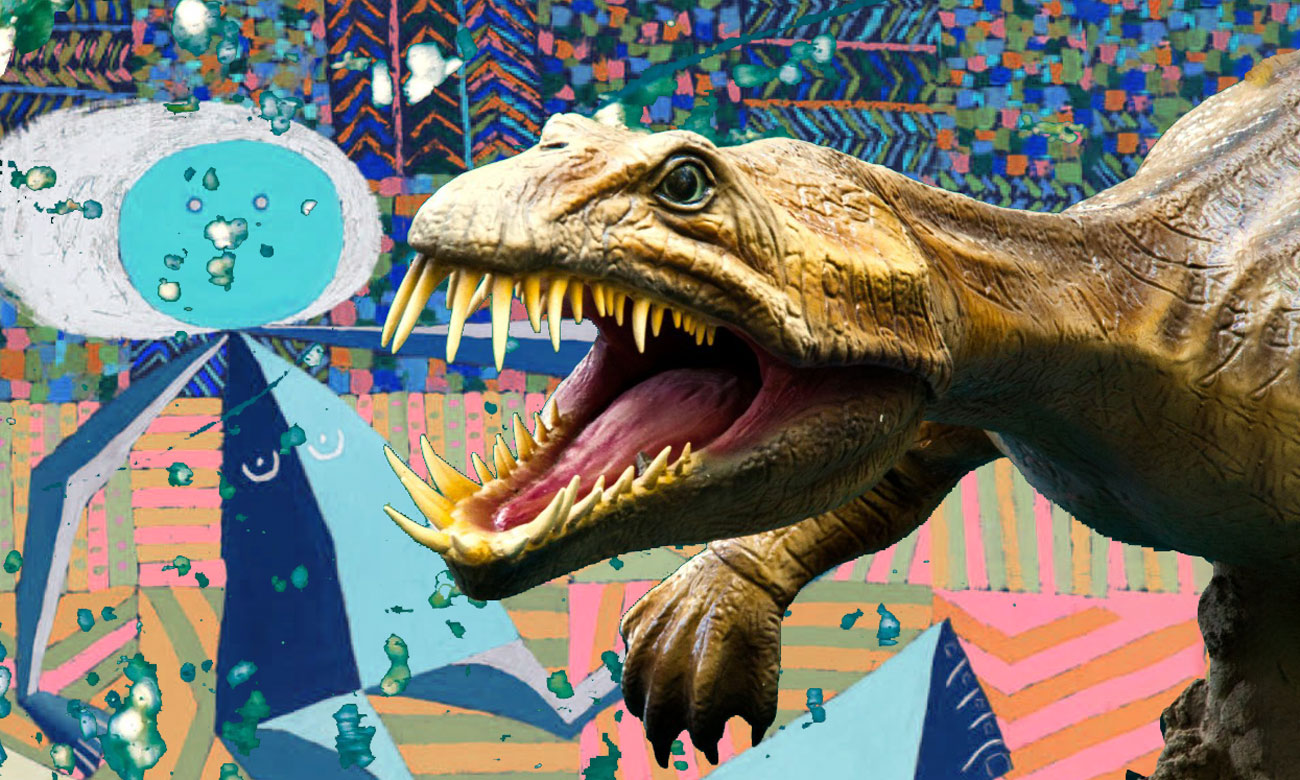 Gap. Missing text. Despite all our efforts, it is impossible to retrieve the exact content of this painting. We only know that this episode deals with the occupation of Alcor by their reptilian rivals, the Anunnas – and also the escape of the Goddess Hathor, who manages to escape them. The Anunnas are the new masters of Alcor, they make reign the terror and the bloody arbitrariness on the empire. The Earth, like the other possessions of Alcor, must undergo the yoke of cruel reptilians. The watchtowers circulate the spotlight on the concentration camps where the fallen gods are piled up. Judging by the last painting, complete this one, the Goddess escaped the forced internment.

The scene represents blue hills, more and more clear up to the vaporous horizon. On these hills, the long processions of the Anunnas loaded with chains, under the whip of their new masters who direct them to the pyre of vanities.

A wanderer: The dawn of dawn
Flickers in the sun
On steep slopes
Near icy torrents

A wanderer has just appeared on the stage. He is only a shadow, crawls, hands outstretched toward some goal. His face is veiled. He staggers. Electronic music follows its hesitant approach, it insists on every misstep. Setting in abyss, echoes. Jerks. The same awkward gesture, a hundred and a thousand times repeated by a crowd of screens of varying size around the entire perimeter of the vast auditorium.

A wanderer: To the mountains of gold
Honey leaking
In solitude
You need to go forward

Close up 4D on the veil that covers his face. He is stained with filth and blood. The room emits a coo surprise: rrrrrRRRRRrrrrrr …..

The chorus: Who held you back
However
The path is waiting
The weight of your bare feet 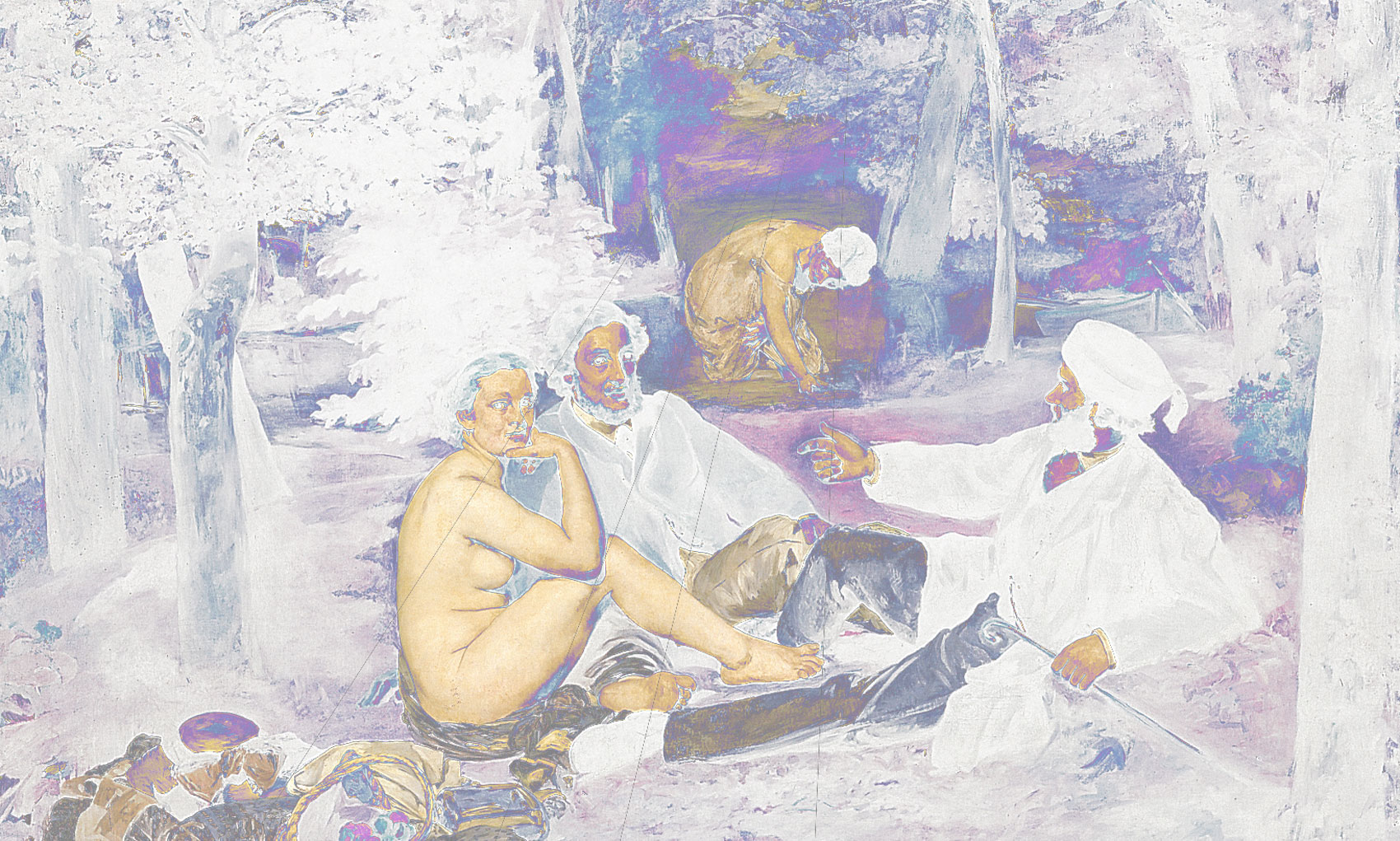 Enoch: I’m the knight they say the Twine
Maid rapist
And dreaded of these
I am the knight we say of the String
Sacred love I reserve it to my braces

The Goddess, also naked, appears above the stage in an unreal nave of prismatic clouds. She raises her left arm. At this signal all the assistant is undressed in turn, according to ancient venerable and sacred tradition, everyone puts a blindfold, and blindly, everyone stomps breast or buttocks, each takes hold of a penis close [(ecstasy?) lacunary text]. In joy, everyone prepares to celebrate the Sacred Immisce of the Buttocks.

As soon as the Sacre-immisce is finished, the Goddess disperses the faithful with these holy words: Come on, the buttocks are gone!
With the banner off, the audience answers in chorus: We make room for the eyes. 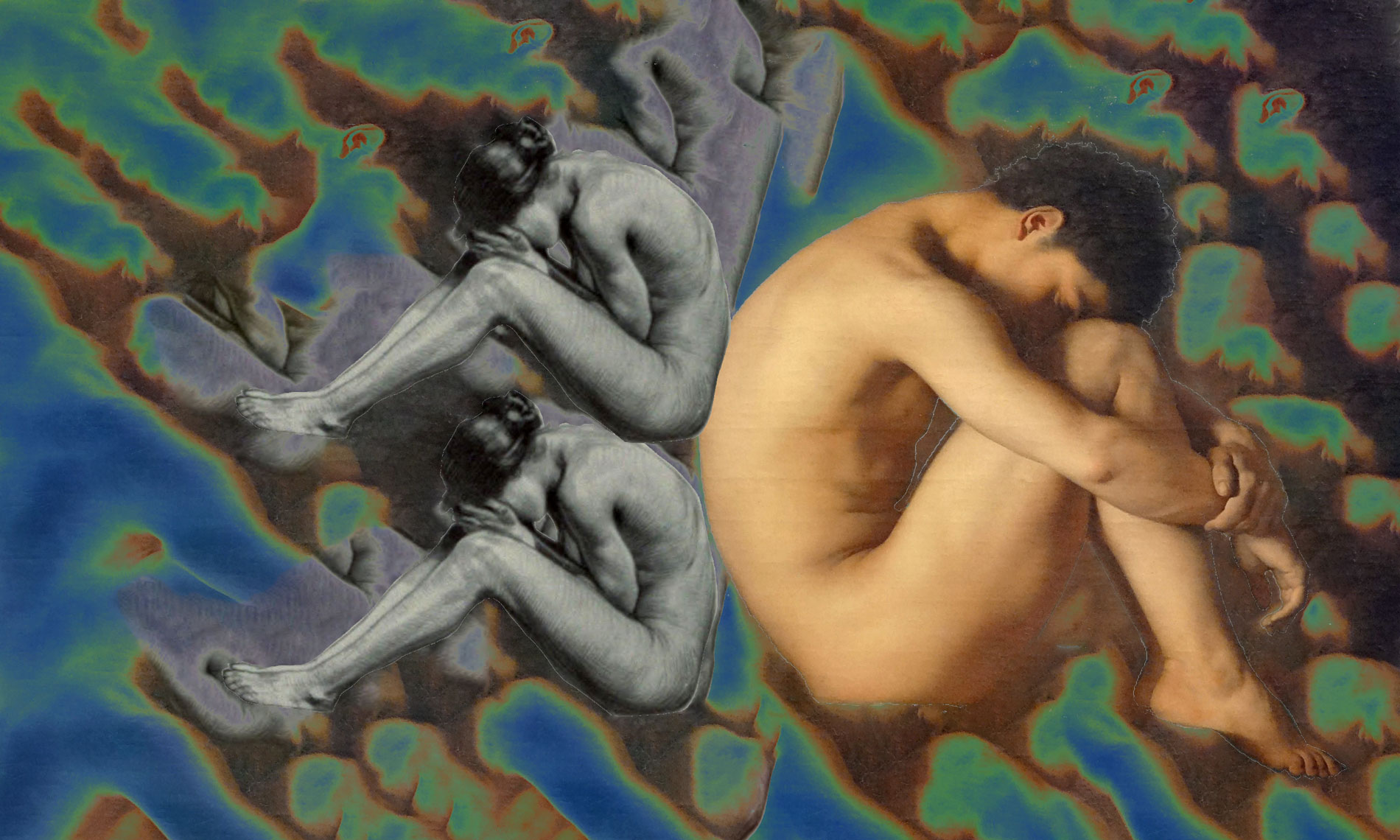 The crowd of gods coo and swoon. Hathor, the real one, raises his arm. Immediate silence. His crystal voice adorns the silence of gold: “Enoch, O my beloved son, I congratulate you. Your piece is fair and beautiful, and the skillful fall forces my decision. You have shown your bravery in a hundred battles, your skill in a thousand competitions. You are warrior, hero, artist, magician, diviner and poet. You have all the skills you need – not the least of which is patience – to order a cruiser in the Guard. Your appointment is accompanied, as is customary, with a private palace on the planet Wahn.”

Enoch bows to the ground, without pity for his exhausted loins. But he is raging. This apparent victory is a semi defeat. He only got the Close Guard. He who already saw himself at the controls of a great subliminic vessel, he will command a mercury cruiser. In his spite, he forgets that the Goddess searches souls and hearts and reads thoughts like you on your screen.

“Which shows that you have not finished with your shitty ego and your unbearable pretensions, my dear Enoch. There is a long way to go. You discover it at your expense. I’m demoting you for your sake. You will be tonight second watch at the canteens.

Take off this usurped uniform, you look like a dressed monkey, you’re pitiful.”

If Christianity had been arrested in its growth by some mortal disease, the world would have been mithraic.