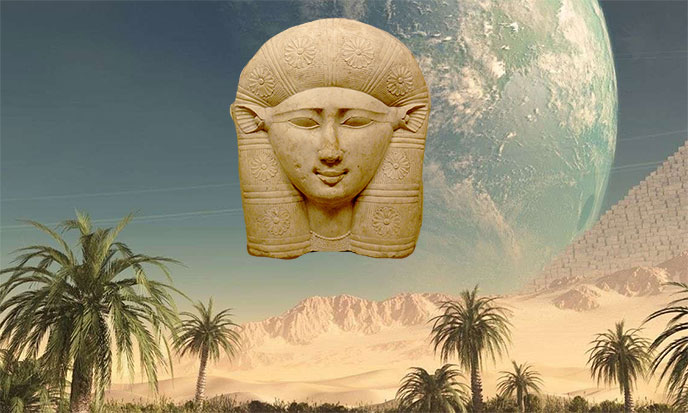 These are the (male and female) key names that define and summarize the era of Taurus, around 4000 BCE to 2000 BCE. This era should be called the era of Cow, since it is dominated by a woman, or rather a dynasty of women, I mean the great goddess Hathor and following Amazons Queens. At the time, Queen of the Amazons meant Empress of the World, since their power was worldwide. That was the triumph of matriarchy, female domination in all areas including war.

“The most widespread religion in the ancient world was perhaps the cult of the bull, the animal dedicated to the Great Goddess. Although it dates back to ancient times and myths, when the supreme goddess reigned, one finds the sacred bull behind it. The excavations of Nineveh, Babylon and Ur, as well as smaller towns of the Tigris and Euphrates valley show that bull accompanied the worship of the great fish goddess Tiamat, often represented by a mermaid, as on a seal discovered at Nineveh “(source)

The author makes the too widespread confusion between the worship of the Bull and that of the Cow. The Bull is not, as he believes, the animal dedicated to the Great Goddess. The Bull is her stallion, rare and precious among oxen-men of matriarchy. 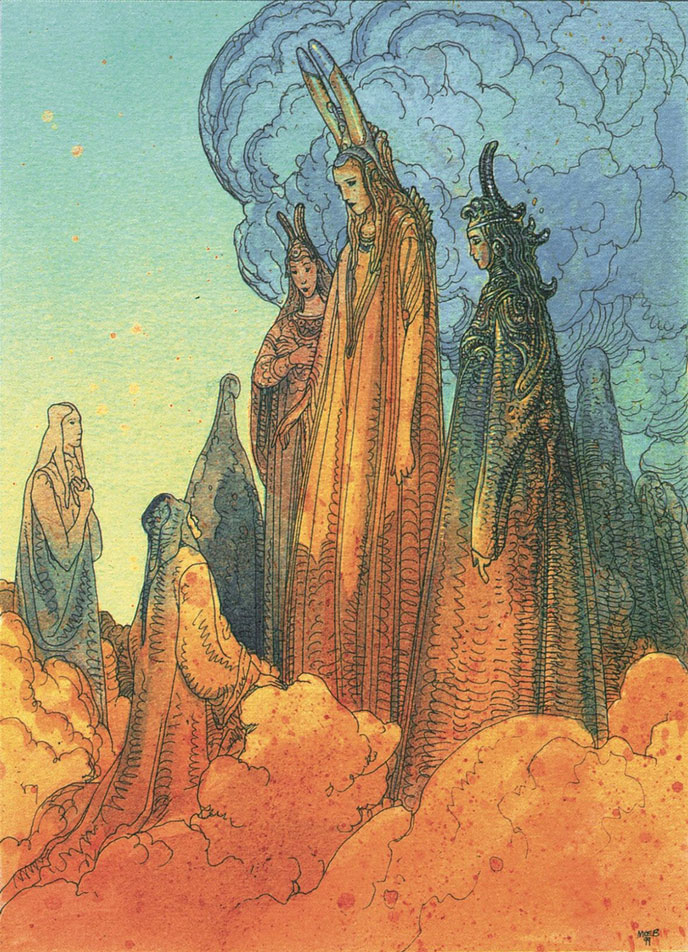 The astrological era of Taurus led the systematic cult of this animal, it is true. But you have to remember that Hathor got cow horns, and that the sacred cow in India wins the bull.

When Nietzsche evokes the most ancient of cities, he calls “Multicolored Cow”. This is Babel. It is funny to note that these two syllables are still devoted to the cow and its milk with Bel dairies and famous Babybel.

Hathor is a Hyperborean goddess, she came with the astronauts gods on the artificial planet Nibiru also called Hyperborea. The Tuatha de Danaan called her Dana An, ie An’s wife. An or Anu was the chief god of Anunna. These people revered Hathor above all other gods, they proclaim she is the Great Goddess who protects humanity. The Sumerians called her Ninhursag.

“The goddess Ninhursag is also called Ki, which means Earth. She is the queen of the mountains. Goddess of fertility, she created all the vegetation of this planet. Ninhursag is one of the older members of the Sumerian pantheon. She prestigious title “mother of the gods”, “mother of all children.”

She is also called Ninmah, Nintu or Mammi. She was the deity of the Sumerian governors, who called themselves “the children of Ninhursag.” Under the leadership of Enki, she participated in the creation of men in a late Sumerian text. Under the name Nintu, she is the goddess of childbirth.” (source)

“Hathor was known in seven forms that played a role both with the deceased as among newborns. They are represented sometimes as seven cows sometimes as seven young women wearing the solar disk and cow horns, playing the tambourine and sistrum. 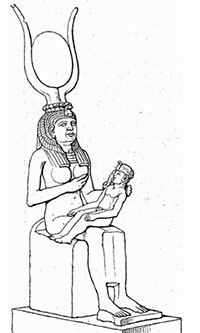 Under their form of cows, they are rather met in a funerary context and are accompanied by the “bull of the West”. Their role is to feed and protect the deceased. In the tomb of Queen Nefertari, each has a name: Master of the Universe, Clear Sky, You Earth Silence, You Land of Kemmis, Red Hair, Bursting Red, Your name blooms through knowledge.

They are also found on mythological papyri, paintings from tombs or temples reliefs. In the Book of the Dead, the chapter 148: “To feed a blessed in the afterlife”, ends with the sticker “seven cows and the bull” (source)closed website MaatdeBelgique

The Greeks know and revere Hathor under the name of Athena, in which is found the root Ath, Hat. Ninhursag-Athena attended Enki–Prometheus for the creation of our species. To her we owe our soul, ie the direct link with the transcendent, a link that each of us possesses in the secret core of self. As such, Matriarch Hathor is the great benefactor of mankind.

For the Sioux and the great tribes of Indians of the Plains of North America, Hathor is the White Buffalo Woman.

The Buffalo indicates the time, ie the Taurus era. Buffalo because in those days there were no cows or bulls in America. White, because that was the color of her skin, while her hair was bright red. The Lakota Sioux have transmitted her words when she gave the red men the sacred Pipe Chanunpa:

Note that Mother Earth is said Unchi in Lakota and Ki in Sumerian, suggesting a common origin – no offense to the most cautious linguists. Note also that Unchi and Enki seem to be one and only name.

Hathor is the great Goddess, the Incas called Pachamama. Closely related to fertility in the Andean cosmology, Pachamama is the earth-goddess in some cultures present mainly in the space corresponding to the ancient Inca empire. The figure of Pachamama is particularly strong among the Aymara and Quechua peoples. It is a major goddess of pre-Inca Tiwanaku culture in Bolivia. (Source)

Mama as Mammi in Sumerian, as Ama in China, as Mom, Mammy, Mum, Mamma, in European languages.

Pachamama where we find – in addition to the universal root mama, Mother – the roots pa and cha, also present in Cha (nun) pa, the sacred clay pipe of the Lakota. Clay, as we have seen, is a very special material, a kind of blood plasma of the Earth, closely linked to the creation of humans. The pipe is sacred because it brings fire to clay, and because its steam opens the divine kingdom. It is thus understood that Pacha means Earth, Clay. Pachamama is thus translated: Mother Earth.

Pachamama is the Mother of Amerindians all right. But Hathor is also the Mother of their ennemies the cowboys. Aren’t they called “cow boys”, sons of the Sacred Cow?

Hathor is doubly divine: by her mother earth function or Mom of the World and by her lover function, as sexual initiator, divine consort and sacred portal to gods’ pleasure.

She is the origin of all plants of this planet, if one believes the Sumerian tradition. I believe she was a chief-gardener who contributed grandly to the development of imported cereals and vegetable. Moreover Hathor is the source of our divine or transcendent side. She is indeed our divine mother, without whom we would be fossilized apes. As such, she is the object of our eternal adoration.

But she is also the eternal object of male desire. Lover Isis, irresistible Venus, Hathor who loves Horus and Ra:

Looms She-Snake Melusine, fairy daughter of Isis who gave awakening with sexual potency and through lightning, both raising equally the kundalini. For the Hebrews, she became the initiator Lilith, first wife of Adam-Ra.

But she is also the Queen of Sheba in the Song of Songs. Just like the Queen of Sheba to Solomon, just like her mystical beloved lady to Djallal ad-Din Rumi, Isis is the awakener, she is spiritually and carnally desirable. Her worshipers nicknamed the Great or the Golden because of her aura. 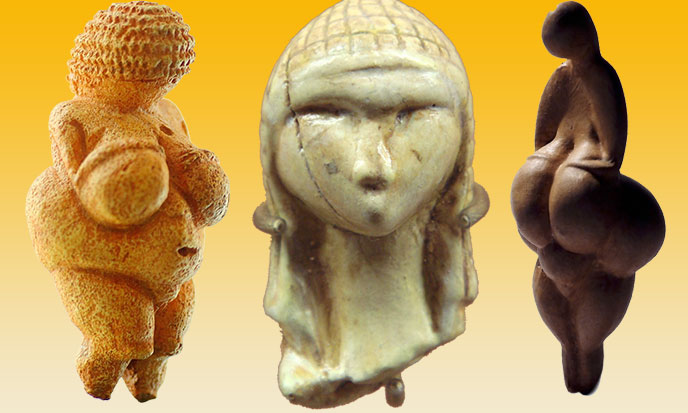 “O You Great, you who go away in the distance,
You who sow the emerald, malachite and turquoise
To make stars
If you shine, I will shine the same.
O you invaluable you the mother of my fathers,
Giver of divine power, vigor
And the great age inaccessible to human,
The beauty of your face glows and sparkles
O Hathor! You’re welcome
The head turns us in front of your lovely little face
O Hathor! O Gold!” (Source)verses of Hathor, cited by Jean-Louis Bernard and Siegfried Schott

Eroticism and mysticism were in Egypt two sides of the same coin; what is above is like what is below. (source)J.L. Bernard, Aux origines de l’Egypte

The original cult of the goddess Hathor was a controlled sexual ecstasy, codified in a ritual practice that gave origin to Tantrism of India. If Hathor cannot satisfy by herself the lust she arouses, she will send a real substitute to fulfill her worshipper, as evidenced by this eloquent prayer: “I love the Golden, I praise her majesty, I celebrate the mistress of the sky, I sing the praises of Hathor and the glory of the sovereign lady. As I implored, she heard my prayer and sent me a lover.” (Source)verses of Hathor, cited by Jean-Louis Bernard and Siegfried Schott

It cannot be clearer: Hathor is one that awakens through sexuality, or rather through the control of sexual impulse.

It is clear that Christianism did not dig this aspect in the sad avatar it produced. Virgin Mary mates with archangels only. Poor Joseph and poor us!  All cuckolds except our priests who are pedophiles instead. 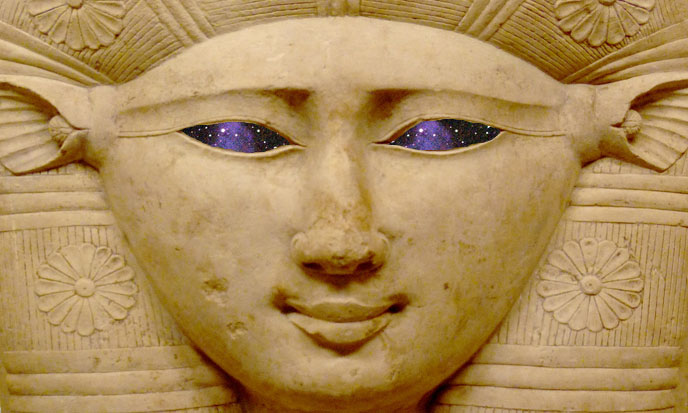