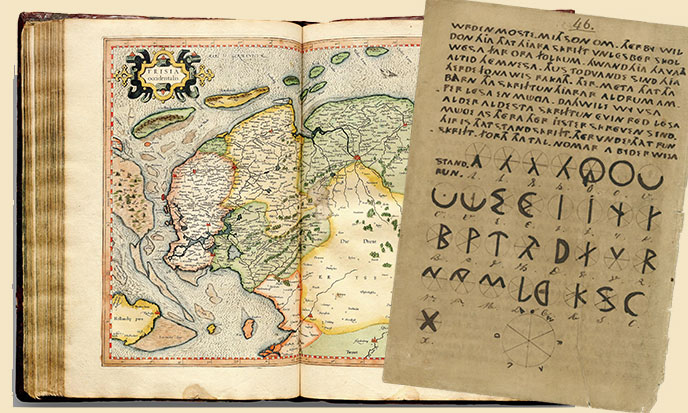 There is in the Netherlands a mysterious ancient book that tells the flood as it really happened !! The book is certainly very old, it belongs to the same family for ages. Authentic testimony? True bogging? Impossible to decide.

The Dutch memory seems to have kept a very precise recollection of the Flood and the sinking of Atlantis. Take, for instance, the plan of Amsterdam: it faithfully reproduces that of Poseidopolis, capital city of Atlantis, according to Plato. “When we had crossed the three external ports, there was a circular wall beginning at the sea and everywhere distant of fifty stadia from the largest enclosure and its port. This wall served to close to the same point the channel entrance on the side of the sea.” (source)Plato, Timeus  Plato describes an island city surrounded by several circular canals, it seems that the memory of this mythical city was gathered by others that the Greek philosopher. It is true that the Netherlands of polders might one day know the fate of Atlantis : disappearing under water.

But there is a more troubling link between the two countries. A mysterious Dutch book, the Oera Linda Boek, gives a detailed and puzzling description of the different episodes of a global turmoil, dated at -2193. Prior to scrutinize its authenticity with the help of a specialist, let us plunge into the book in question. “This is written on all the boroughs: Before the coming of bad weather, our land was the most beautiful in the whole world, the sun was rising high and there was rarely any frost. Trees and shrubs were producing various fruits, which are now lost. In the fields, we had not only barley and malt, but there was also wheat which was shining like gold baked in the sun. The years were not counted because they were all more and more beautiful.” (source)Pierre de Châtillon, Climatic Changes

There are lots of information in this first excerpt. Before the disaster, the sun was rising high on Oera Linda and frost was rare. The climate has therefore changed abruptly. The good wheat land, located in the temperate latitudes, was brutally moved in the far north. The same episode froze alive thousands of mammals in Siberia. This sudden cold might be attributed to a change of place of the poles, either by a tilting of the Earth, or by a shift of the Earth’s crust over the layer of viscous magma. (source)Immanuel Velikowsky, Worlds In Collision

In any case, the result is the same for all lands that are located near the pole: the fauna and flora are suddenly inadequate. The climate becomes harsh, the sun remains low on the horizon.

“How the bad weather started: Throughout the summer, the sun remained hidden behind the clouds, as if he dared not look at the Earth. It was the perpetual calm and fog drenched the lungs as a sail set on a marsh house. The air was heavy and oppressive and humans were troubled in their heart. In the midst of this calm, the Earth began to tremble as if it was dying.” Why does the sun stay hidden before the disaster? Why this unusual wetness and this oppressive climate?

It has often been remarked, at the approach of an earthquake, a singular behavior of the animals, as if they already knew that a bad event was coming. Wildlife has antennae to perceive the danger before it happens, this is a key to the survival of species. In this version, no god warns the men to build an ark. Instead, there is that sad feeling in the hearts of men. “The mountains opened up to vomit fire and flames. Some have even sunk in the heart of the Earth, while elsewhere mountains came out of the plain. Aldland called Atland by sailors, disappeared in the wild waves which rose so high on the coasts that everything disappeared under the sea.“ 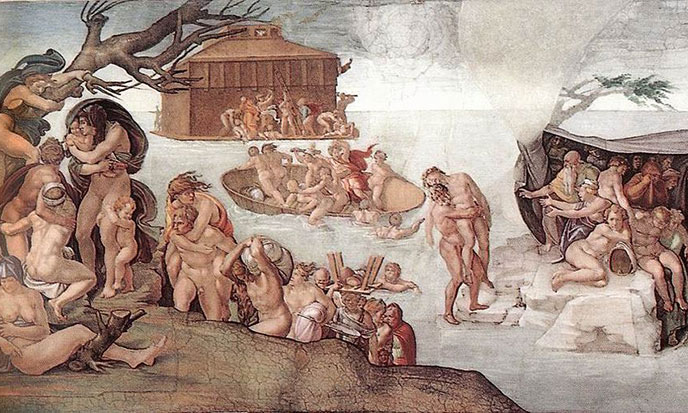 “Lots of people were swallowed by the Earth and the others who escaped the fire perished in the sea.” Nice precision on Aldland, in which everyone has recognized Atlantis. Let us note, incidentally, that the Boek gives us an original etymology of Atlantis. According to Plato, the name comes from Atlas, the Titan who gave his name to the ocean where was his island-continent. But according to the Boek, Atlantis come from the Nordic Aldland, the old land, the ancient land. All these details make you feel dizzy.

What a pleasure for the researcher to find another source that Plato to attest the existence of Atlantis! And of its sinking … The fortieth day of the flood, Noah let fly a dove, which did not return. The dove had found a piece of dry land. The flood was over. Noah gave thanks to the Lord, and took out his menagerie.