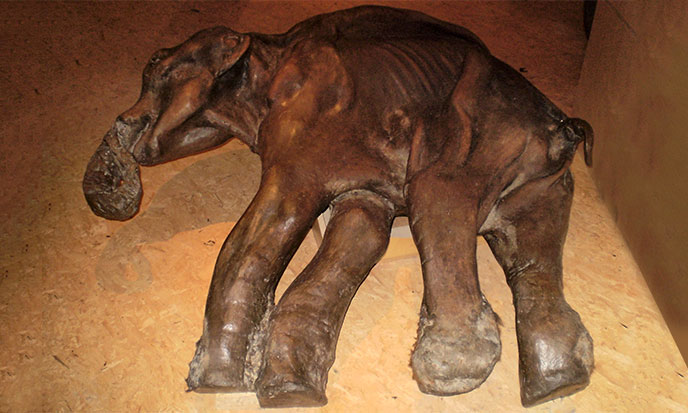 A number of geological clues suggest that the Earth’s poles have held different positions in the past. But geologists cannot agree that these changes have occured in just a moment. And yet …

“The North of Alaska and Siberia appear to have suffered the most from the climatic changes that occured between 13,000 and 11,000 BC. A gigantic ossuary lies around the boundary of the Arctic area, collecting the remains of countless large animals, with a still intact flesh, and astonishing quantities of perfectly preserved mammoth tusks.” (source)Graham Hancock, Imprint of the Gods Where do these carcasses come from?

Why this mammoth graveyard?

“Hundreds of thousands of animals have probably been frozen immediately after death, and they remained so, otherwise meat and ivory would have rotted. An extremely powerful force was certainly at work to cause such a cataclysm.” (source)Charles Hapgood, The path of pole From the late 19th century, Russian hunters have discovered these ossuaries of mammoths with woolly hair, and saber-toothed tigers, animals that disappeared long time ago.
Missing? Not anymore. We found them back. By tens, by hundreds of thousands, perhaps by millions.

“By discovering this exotic mixture of macherode tigers, camels, rhinos, horses, donkeys, deers with gigantic antlers, lions, snakes and antelopes, one cannot help wondering about the world in which these animals lived. This wide variety of species, so different from those encountered nowadays, raises a question: wasn’t their environment also completely different?” (source)Dr Dale Guthrie, The paleoechology of Beringia, 1988

Until recently, we could see that article in the archaeological press: “The frozen subsoil of northern Russia has once again delivered an exceptional record of the animal past of our planet.

It is in the peninsula Yamal, on a bank of the river Iouribei, that the discovery was made by a reindeer herder of the people Nenets living in this remote region of Russia. According to Natalia Fedorova, deputy director of the museum Chemanovsky in Salekhard, it is an animal in exceptional condition. “It was lying on the shore. Its conservation status is absolutely unique. There is no other like this in the world… It is entirely preserved. His eyes are closed because he has been dead for 10,000 years, but his trunk, his small ears, everything is there.” 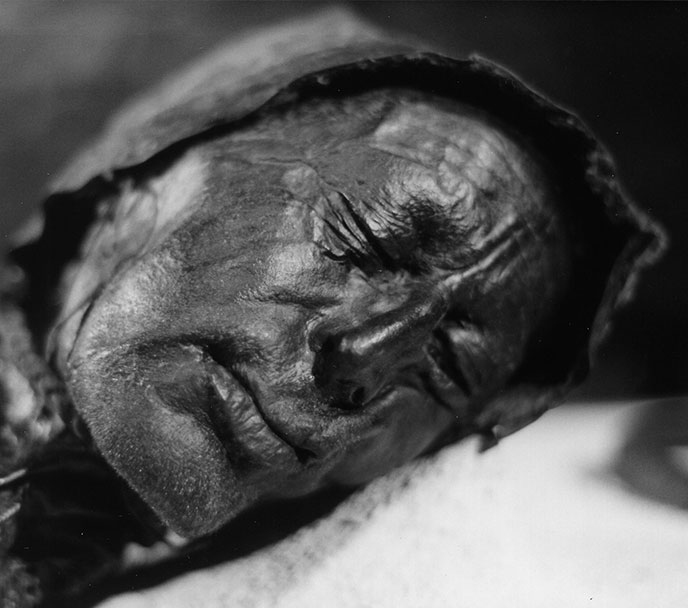 For comparison, we will note the smoked look of the skin of the Man of Tollund. His body was found in a bog when it began to thaw. He was frozen gradually after his natural death, 2,300 years ago.

“Across the Alaskan deposits, there are also traces of atmospheric disturbances of extreme violence. Mammoths and bisons were crushed and rolled as if the wrath of God has descended upon the Earth. In one site we found a mammoth leg with pieces of flesh, claws and hair still hooked to the blackened bones. Near that, we could see the neck and the skull of a bison with the vertebrae held together by tendons and ligaments, and the chitinous outer covering of horns was still intact…

The animals were simply broken up and scattered over large areas such as straws, even though some of them weighed several tons. Tree stumps, also grinded and crushed, were inextricably mingled with thousands of bones, and everything was covered with deposits of frozen sand.” (source)Charles Hapgood, The path of pole Obviously, this area of warm-temperate climate was suddenly plunged into a deep freeze. All the animals of warm-temperate climate, lions, antelopes, bisons, mammoths, would have been drifted by the huge wave of flood, and at the same time, the crust would have slipped.

The warm-temperate area Alaska-Siberia would have suddenly been located where it is today: around the North Pole. But the ragged look of the animal corpses suggests another agent that tsunami and outbreak of the freeze. An explosion could better explain the blackened remains of some animals.

Asian legends mention the day the gods have decided to get rid of large animals that were destroying their crops. They gathered all the big mammals in a vast plain, and there they have them coldly eliminated with the fire from the sky.

But what credit can be given to these sources? Legends never tell what really happened, they are interpreted at the whim of peoples and eras. The painstaking work of mythologist leads to an interpretation, a decoding: restore the events in their proper context.

What explosion could produce such damage? A nuclear explosion is not accompanied by a fall in temperature. It could be an explosive unknown in our time.

In the theory of gods astronauts and wandering planets, Nibiru, Asgaard, Valhalla, Atlantis, Mu etc facts are more easily reconstituted. The disaster would be a human, or rather divine. Pilot error. The mother ship of the Atlanteans or Anunnaki missed its takeoff, he fell heavily to the sea, its sheer size caused a giant tsunami, destroying all coastal civilizations, but the Atlas captain avoided the divine disaster the giant spaceship could regain space and his native Pleiades. The countless disasters that struck the old and fed hundreds of legends are all rooted in the facts. A simple pilot error. On a spherical machine of 3600 km in diameter …

Here no pilot error, but a brutal removal of energy: coming over the pole, a giant machine – the same or brother – pumped suddenly all the energy he needed heat. Hence the sudden drop in temperature. You have to be a heat pump combined with a vacuum pump. Oxygen, photons, electrons, all that can turn into motive power was drawn in by the huge machine. The sunlight had become invisible under the icy shadow of the ship. As he remained hovering above the northern ice on earth humans have dubbed Hyperborea, the land above the pole … and the gods that live there have become Hyperboreans.