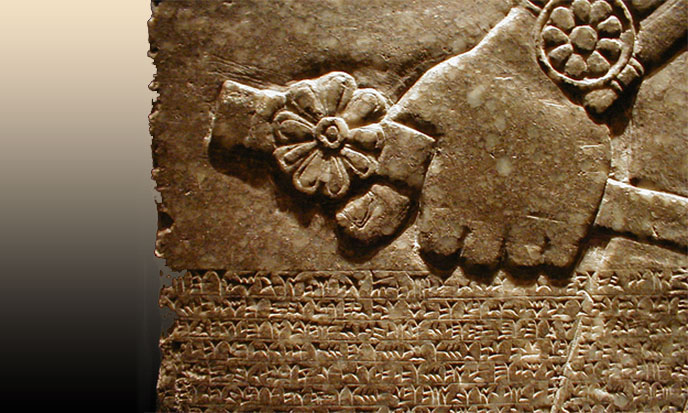 The Sumerian tradition has strongly influenced the writers of the biblical Genesis. We can see identically in it, the myth of Noah and his arch.

Let us enter the story of Sumer, to which we associate, in red, the version of the Bible.

After having created men, gods wanted to destroy humankind through floods. Human beings had indeed multiplied to such an extent that they were making too much noise, disturbing the precious gods. They quickly reacted. Namtar, the god of death and plague, was in charge of unleashing a disease upon men and women as an example. Enki, the god who created the human race, managed to save them. The gods sent other calamities, but each time, Enki helped women and men. Enlil, sonor brother or both of Enki, was jealous of the creatures of his father. He decided that a universal flood would drown all mankind.

Then Enki appeared in dreams to a human, Atrahasis also called Utnapishtim, and gave him his instructions. (We already know them: “Build an ark soon, embark animals couples, and all your people”, old story). So Atrahasis did what Enki had requested. He built a large boat, embarked birds and livestock. (Some pure animals and some which are not pure, some birds and everything that creeps on the ground – Genesis 7:8)

Atrahasis also embarked in the ark members of his clan. (Come, you and your whole family in the ark – Genesis 7:1) Then a heavy rain began to fall continuously. And then, first variant: the 40 days and 40 nights of the Bible have shrunk in the wash. No wonder, with all this water! “After seven days and seven nights, the storm subsided. Atrahasis left the boat and made offerings to the gods who were hungry. Enlil, enraged, noted that men had survived the flood.” (source)The Epic of Gilgamesh, by Jacques Cassabois

A Subtle Change In Human Program

Enki suggested a compromise: humans will not multiply so fast anymore. Diseases will decimate a third of them. Constantly, in the Sumerian version of our creation, we can see genetic manipulations involve to restrain us, lessen us, limit us in many ways.`It is possible that the advances in genetics allow to correct these changes of our genome.

In his venture of degradation of his creature, Enki added an obstacle which is probably not genetic: the deliveries. They became painful (Eve gave birth in pain), and dangerous for both mother and child. This seems to allude to the large size of children. The gods had reproduced with humans, giving birth to a race of giants. King Gilgamesh, who told us this story, was a giant indeed. In his opposite portrait, we can judge of his proportions and his strength by the size of the lion he strangled in his arms, with no apparent effort.

A Giant King of Men

If you believe this portrait, Gilgameshhad to measure between 27 and 36 feet high. A giant thirty-six feet high, that’s great. 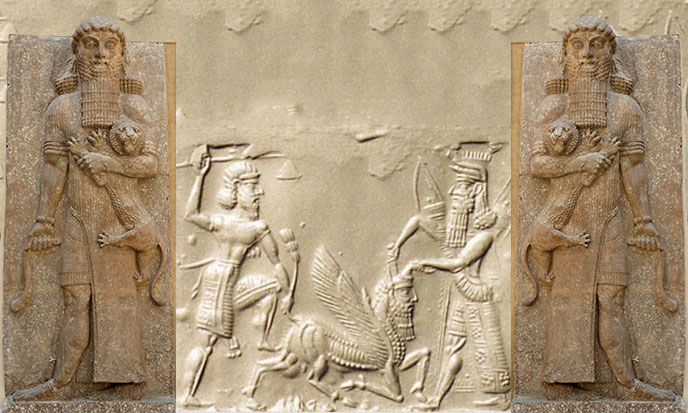 The similarities between the story of Atrahasis and that of Noah are too numerous to be the result of chance.

Atrahasis is the original version of the biblical myth, as the Sumerian version is much clearer than its Hebrew copy. We feel like the Bible writers have copied a story without understanding the real meaning. The Sumerian tablets were detailing the stages of reproductive science, the Hebrews saw there only fanciful legends. At that time, no Nobel Prize among those brave Hebrews. They were all goatherds and leaders of donkeys. How could they understand the technology of the former gods?

They reacted like the gods had wished: with admiration, submission, devotion, commitment, and a lot of sweating. The Babylonians made them work like donkeys. But they have also taught them to read and write. As soon as they could, Hebrews returned home, or almost home: among Philistines, ie the ancestors of Palestinians, taking drafts of a book which will be a best-selling book for twenty-five centuries: the Bible.