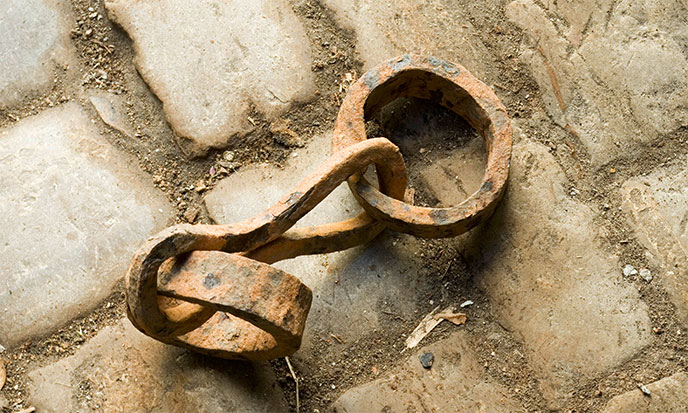 After the Conquest, America was wide open to the whites: an almost empty continent to cultivate and exploit.

The Reds were reluctant to adopt any cooperation with the Whites. Then began both the Indian wars and the African slave trade. To govern the slaves, the 17th-century France wrote the Black Code.

This is not a book strictly speaking; this is the name of an array of legal texts regulating the lives of black slaves in “the French islands”. Originally intended to curb abuses and mistreatments of blacks in the plantations and also to stop the illegal trafficking, the Black Code had the effect of bringing the condition of slaves close to other categories of persons. But also of making legal the practice of slavery and the slave trade.

The Black Code gives to slaves and slave families of the American islands a civilian status of exception in relation to the customary law of France of that time, and gives masters a power of discipline and police over their slaves. This power is similar to that in force for soldiers, with corporal punishment. It requires that the masters have have all their slaves baptized, negroes, black women and negro children in the Catholic religion, Apostolic and Roman, especially Roman.

The Black Code, as the Koranic Law, allows corporal punishment but it prohibits the mistreatment of slaves, male or female. If a slave is pregnant by a man, whether he’s free or not, the fruit of this union will be a slave. The slaves may complain of mistreatments to the common judges and people of the king, they can also testify in court, marry and build a savings fund to buy their freedom. But their children will be slaves by the law, property of the mother’s master.

Originally designed for the French islands, the Black Code does not apply to New France nor French Canada where the introduction of slaves and slavery will always be prohibited. 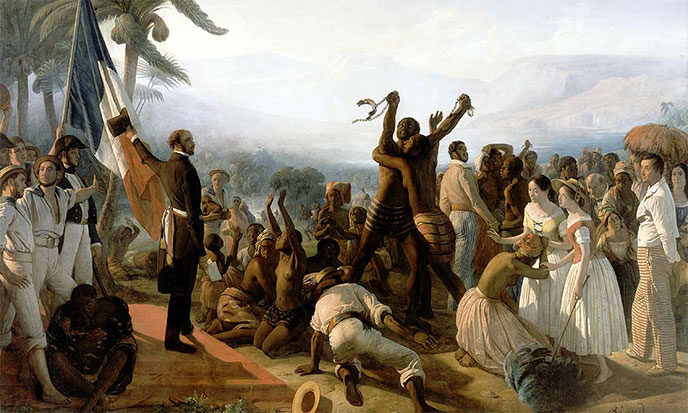 The Declaration of Human Rights of 1789 outlines the abolition of slavery, but a last-minute restraint “applies it only to residents of the mother country” where there has never been slave and not to those of the American colonies. In other words it is useless. Politicians possess the secret.

Moreover, just emperor, Napoleon restored slavery in the islands, because, well, you would not want all the same that it be the white planters who do the job? The slave trade shall be prohibited in 1815, but slavery will be definitively abolished in France on 4 March 1848. In France.

However, an article in the South Carolina Black Code contains the following clause: “Anyone who willfully cut a slave’s tongue or gouged out his eye, castrates him, cruelly scalds him, burns a limb, will deprive him of the use of a part of his body, or will inflict on him some ferocious punishment besides that the penalty of the whip, the blackjack, the stick, the irons, the prison and the dungeon, will be punishable by fine for each of these offenses.“

The fine is set at $61.25. In Louisiana, it can reach $200 and even $500. Which are not given to the victim, do not mess around. The judge has other jobs for these sums. Besides, were there a lot of complaints? Considering the treatment that is inflicted on the brown negroes, the hanging without judgment, I guarantee that many “cruel punishments” were disguised as an attempt to escape followed by hanging, six feet under the negro and you have it in the room. ‘bone. Who knows if the judge didn’t close his eyes? Justice of whites.

For black Americans, hell went on even after the Civil War. And ordinary racism continued everywhere … Segregation, ghettos, discrimination, institutional humiliation, bullying and even summary execution or human sacrifice with the crazy guys of Ku’Klux’Klan…

We are no longer whipping black slaves on slave tubs, but we gunpoint slaughter them in the USA, we exploit, kill and rape them in Africa, and without saying so, many whites are still convinced of the superiority of their race over all others. Yellow people believe the same thing. Are we out the woods yet? I doubt it.

Affluent blacks pay fortunes to straighten hair and skin depigmentation. We have not healed our wounds. We need to dig how deep the gap remains. Equal rights and justice for all, no matter of faith, colour of skin, colour of mind, of ideas, of acts and words. The best colour is yours. Ever. Remember.

Revisiting the Black Code with the eyes of the heart is a journey toward reconciliation. What is in this famous code? We will provide details.