In MesoAmerica, the Olmec statues and legends say that Atlantis population consisted of two races, blacks and whites, Negroids from West Africa, and blue eyes blond Celts. Next to these two races living in big stone cities, some redskins people lived away in the outback as hunter gatherers.

However samples of every race and colour were found in Atlantis, as it happens today in the world’s capital cities like New York or London. Each race has its own speciality and monopole, forever established by Tradition.

They all live in harmony, the social roles were dispatched into four colleges or castes. Please note that the races did not mix due to strong social and religious taboo. Judging by the Olmec statues, these many races were in good terms and had a mutual respect. But each ethnic group grew its specialties: for instance the blacks were skilled in magic and martial arts, the blonds were engineers and builders. (source)Popol Vuh, Book of the Events In anticipation of the flood, officials of both ethnic groups had found refuge on the Andes’ Cordillera.

They are a handful, but thanks to their knowledge and their powers, they begin to educate the natives who take them for gods.

The indigenous populations, probably of Asian origin, had remained away from the pre-flood civilizing currents, or it is that after having known development long before, the natives had returned to natural wild life.

With a propensity for human sacrifices, what is abhorrent to Viracocha,  Andean name of the Atlantean gods. In Mexico, they are called Quetzalcoatl, or Kukulcan. These peacemaking gods preach the love of neighbor, as the apostles of Jesus.

What is disturbing is that it happened 10,000 years before himThe Feathered Serpents arrived just after the great cataclysm, called the Pop Vuh.. History is repeating indeed, in such a precise way that we are puzzled. Is time cyclic, as the Ancient said? Those peaceful gods were also civilizing teachers. They showed many sciences and techniques to the fascinated natives. Thus, thanks to the control of the energy of lightning and to the Atlantean science, a civilization restarts.

For ten years, it has prospered. Or for ten centuries, we do not know.

It is a new golden age, like that of pre-dynastic Egypt, or the Eden of Mesopotamia, which is contemporary. Like their counterparts in Sumer, the Feathered Serpents were invested with a mission, to restart a civilization in America. Mission accomplished, Whites and Blacks could finally return to their homelands.

They were the Atlantean colonies of Africa, Western Europe and the Mediterranean Sea. Another god, Tezcatlipoca, routed Quetzalcoatl who fled on a raft of snakes. Tezcatlipoca, Smoking Mirror, dark and cruel, observes all what men do with a ‘smoking mirror’, oval slab of obsidian carefully polished, with a surface veiling to show distant or future images. A video screen? Telecommunications? 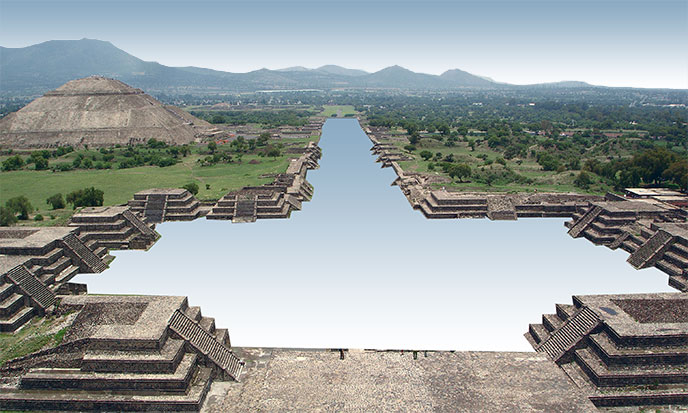 Tezcatlipocah can see distant or even future images. Was it some Fon or Yoruba magic which qualifies Tezcatlipocah as the Emperor of the African branch? … One can imagine that there was no conflict between the Serpents of Meso-America but a simple dividing of troops: those who stay in America with Smoking Mirror, and those who cross the Atlantic with Feathered Serpent. Perhaps the Serpents have quarreled. And have broken up. In any case, if all the white gods have left America, the black gods remained.

For any reason, the White Serpents and the Black Serpents eventually felt cramped on the American continent. Pop Wuh tells us that the gods were nostalgic for their country. (source)Popol Vuh, Book of the Events Which country? Surely not their home island, Atlantis, engulfed under the ocean. The Feathered Serpents have therefore returned to the Atlantean colonies before the flood, Egypt, the Celt Country and the Yoruba Country. Several millennia before our era, the Atlanteans (re)discover Europe. A new page of history is turning over …

During that time, on the American continent that was once an Atlantean colony, Tezcatlipocah and the Black Gods would develop a brilliant African civilization, urbanized and agricultural, over several millennia, while keeping close contact, across the Atlantic, with the Mother Land Africa… it is the civilization of Toromagen, that the ignorant archaeologists call the Olmecs.

Do not look for followers. You will have only zeros.