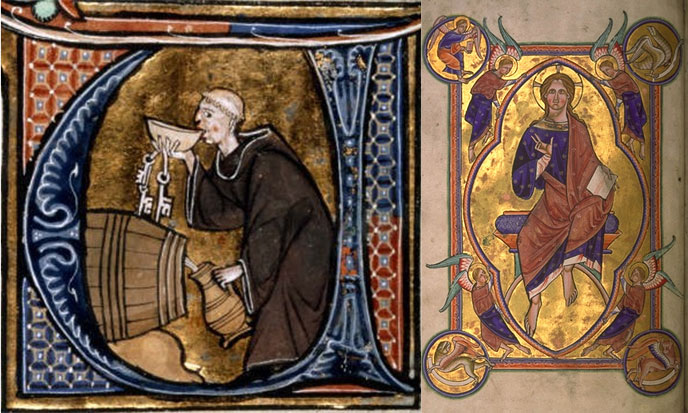 “I fear that we should set the record straight and in a drastic way: the Middle Ages never existed. This is a pure invention, a lie, an incredible manipulation of consciousness made by the religious dictatorship which settled in Europe starting from 1320/1350 from the palace of Avignon.”

Thus begins one of the best articles of the site of my friend Jean-Claude Flornoy. By dint of exploring our past in search of founding visions, my benefactor fell (it was inevitable) on the Fomenko thesis or recentism. And it was another big bang in our small circle of researchers. However, the shock gone, the recentism took time to make its way into our brains.

What is the recentism exactly? A very serious thing, if we are to believe Fomenko.

The New Chronology or Récentisme 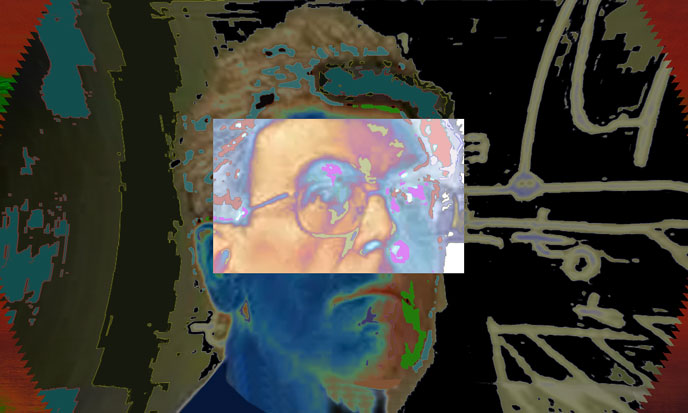 Another History Of The Middle-Ages

Following a humanitarian disaster, a very serious epidemic of plague, the Roman Empire ended abruptly for lack of populations in a Europe almost deserted.

A terrible episode of lawless cruelty would inevitably ensue, unless… Unless an elite of Roman legates do invent urgently a good magic recipe, a reason to live and behave themselves for populations returned to the wild.

Roman legates gathered in Avignon and laid the foundation of a last chance religion. To throw it to survivors of the plague, without memory, without horizon, ready for all and especially the worst, it had to be a religion of love.

Christianity was the religion of the empire initiated by Constantine 1st, Byzantine emperor. He had covered Europe churches and cathedrals who only wanted to serve; only problem: they were dedicated to Christ Constantin, the overwhelming tyrant of Rome, whose image had become hateful.

So what ? It was enough to replace the old emperor by a poor young man like them, operated by Rome like them, tortured on the cross like them, all the survivors of the disease, pain and hunger. It was enough to invent these ingredients with a nice story acceptable, by drawing for details in similar legends, which are legion …

Neo-Christianity that we know thus rests on a beautiful fable, moving at will, entirely made in 1350 for the requirements of the cause… It was nothing less than to save what was left of civilization in the West! The Great Plague spared no one. France was in flames. Any town, any village has burned its dead.

The stench was unbearable everywhere. The stakes have destroyed the corpses of plague victims, before burning alive the followers of the Old Religion, these male and female druids that the new priests accused of witchcraft. It was absolutely necessary to restart the civilization, to regain control of the rabble.

Giving men the fear of God is always profitable. The Druids were an obstacle to the new religion, intended to the “simple-minded” brutal and harsh. Transforming wolves into bleating sheeps: “Pay my lambs, pay my sheeps.” This is how in Avignon the Roman religion was created, and the first pope was called to reign. Subsequently, the popes moved to Rome, but the origin of Christianity would be located in Avignon by 1350. Still according to Fomenko. How such sleight of hand has it remained so long unnoticed? 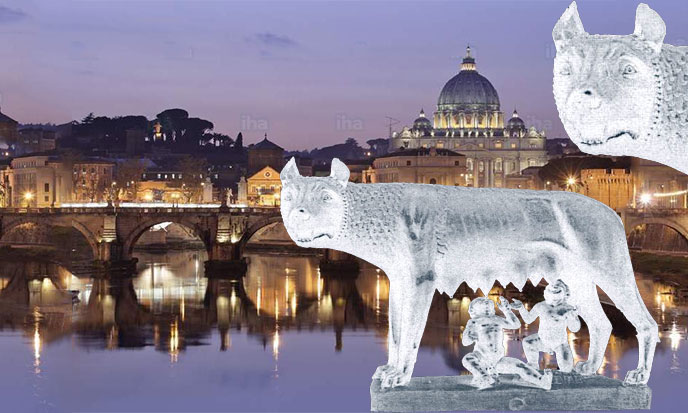 Here Is A Clue

“We have, it seems, moved directly from ancient Rome to the Renaissance. The year 0 of the birth of Jesus probably did not exist as it is presented to us, and neither did Jesus. What a mess! It is a historical “gulp” to which I invite you, a quantum leap. Accept tread with me upon these paths still little frequented of the world’s memory. Like me, hallucinate and participate in the huge thinking that begins and must be done to put the record straight.

So, the year 0, the very start of our calendar, is the foundation of Rome by Romulus and Remus. To all Christian dates, we must add 753 years and adopt the system of AUC, Ad Urbe Condita, year of the foundation of Rome. We are in the year 2012, but not after Christ, oh no: 2012 after the founding of Rome! Then everything becomes clear: in 1078 AUC (325 + 753 = 1078) it is right in the era of the Roman Emperor Constantine and the First Council of Nicaea.

So he is the organizer of this cultural revolution, he is the culprit! He alone could afford this, he had the means, those of the World Empire of the time. The Romanesque is a work of Romans! It is for his own cult that he had built these myriads of buildings, for his personal glory! The “Christos”, “God’s anointed”, it is him and only him, the undisputed master of Rome, the emperor of East and West, the founder of the city that bears his name: Constantinople. What kind of religion was his?”

The baptistery in Ravenna

Some may object to me that there are many proofs of the existence of Jesus, all over Europe since the Middle Ages and the introduction of Christianity in Europe. Would that stained glass, mosaics, frescoes and sculptures of the cathedrals representing Christ.

Well this is not so sure. The windows are never earlier in the 13th century, we know very little, and if some well represent Christ, he could be Imperator Constantine disguised as a penitent, wearing the Mithras robe as he liked to show the obverse of his coins.

Before the 14th century, if we find in fact representations of Christ, the name of Jesus and his Biblical identity are never mentioned. For then Christ was not Jesus but the Roman Emperor Constantine dressed like Mithras. 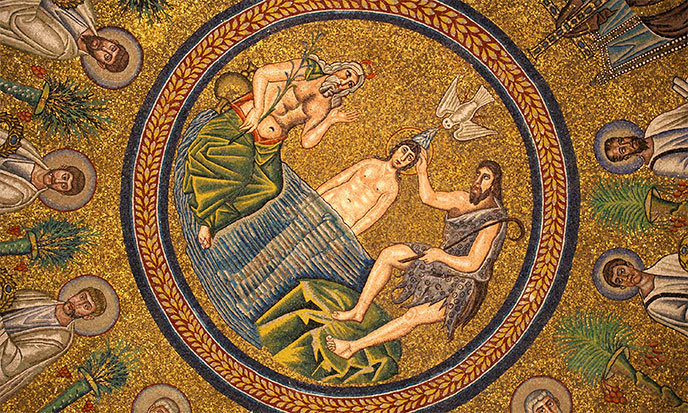 And then came the case of the Baptistery in Ravenna. A dear friend sent me the photo above. And then I pulled the mug. I think my friend did not realize the scope of this photo. I saw evidence that, suddenly, ruining the beautiful theory of the missing centuries. Indeed, the baptistery is dated 6th century, so as Fomenko prior to Jesus’ invention. Yet the mosaic really represents Jesus Christ with John the Baptist, no problem: that Christ then is absolutely not Constantine.

This mosaic by itself shattered the thesis of Jesus invented in the 14th century. One can imagine how it made me shit. So I thought taratata! look see!
Well took me. Wikipedia tells me that: “The Arian Baptistery was located near the church of the Holy Spirit also built by Theodoric and originally named Hagia Anastasis (Holy Resurrection) This church, Arian cathedral was re-consecrated as. Catholic cathedral under the invocation of St. Theodore (soldier and martyr of Amasea in Porto) in 526. very little remains of the original building since its reconstruction in 1543 “.

Rebuilt in 1543, the mosaic is from the 16th century: it is no longer opposed to the hypothesis of a Jesus invented only in the 14th century. The hack is as it were proven … But if a previous baptism in the 14th century were to be discovered, not panic, nothing proves whether Jesus invented. This is the baptism of Mithra – Esus among the Celts. Bloody schemers! They really thought of everything. Well no, actually. They laid a lot of blunders.

Now we get the pix. From the 14th century, all of a sudden, this brave Jesus appeared everywhere to cover the old image of forgotten Christ-Emperor Constantine, Basileus of the Roman Empire of the East, in his capital Byzantium he renamed Constantinople. Today Istanbul. 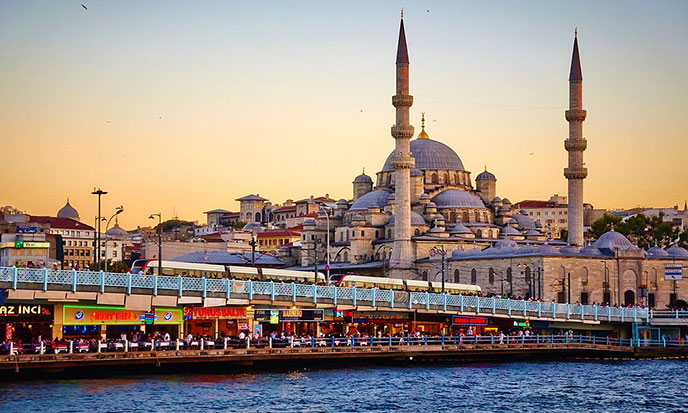 It was time to move on. The old myth is dead, churches and basilicas demanding a new Christ in Constantine’s image. They choose the Jewish people, not next to Rome, not far from Constantinople. They wrote the first manuscripts where Jesus’ name and story appear. Paradoxically, the Jewish archives have no trace of the called Jesus. No more than the Roman archives, yet very comprehensive.

To make the new Christ more credible, he was given the look and facts of an illustrious semi-god from antiquity: Esus, Yves, Mithra, or whatever you call him. Et voila. The trick was played so well that it’s still lasting.

My reading takes strict against the foot of the historic called official version, which makes a new Constantin Christ, wanting to overshadow Jesus, which he considered too Jewish. This thesis, vaguely anti-Semitic policy voluntarily, is contradicted by the facts and the absence of non-Christian archives.

Unlike mine, the so-called historical version does not explain the parallels between the life of Mithras and Jesus, too numerous and too precise to happen by chance – which as we know does not exist. 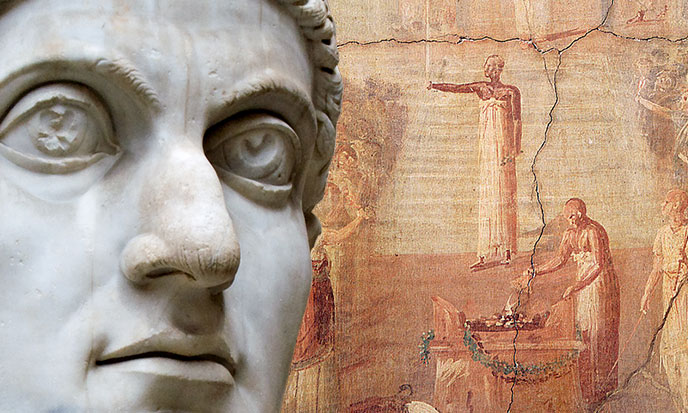 As long as you live, take care not to judge people on the look.