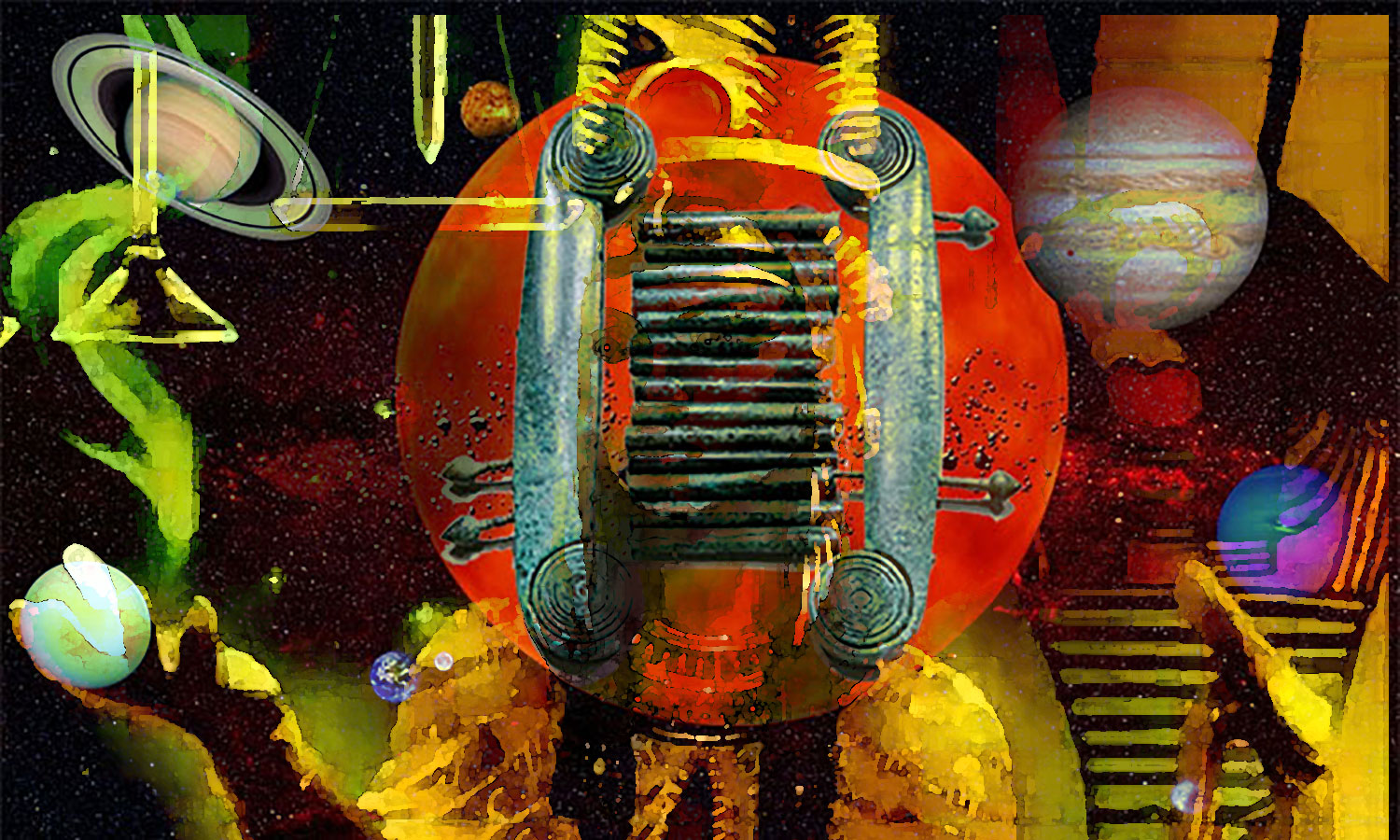 There is a great ancient mystery that has its roots in the night of time. Musica Universalis, the Music of the Spheres. Pythagoras has given us this mystery and its key. The strength of sound has been known since ancient times. But what strength is it? Sound is the origin, the mystery and the key.

Our time is forgetful of pre-antiquity. In the field of sound, our industrial and mechanical age has focused on a very small aspect of sound science: that of sound reproduction and conservation. Amazing! Those stubborn money slaves can be so shitty! There are so many other aspects of sound, it has so many other properties that are unknown now, but that pre-antiquity knew very well.

Pre-antiquity? Don’t be shocked by this neologism. I know it’s wobbly. It is clear enough to designate the vast period when the gods walked among men, as can be read in many legends. Latin: legenda, which deserves to be read. To read absolutely.

Musica universalis (lit. universal music, or music of the spheres) is an ancient philosophical concept that regards proportions in the movements of celestial bodies -the Sun, the Moon and the planets- as a form of musica (the Medieval Latin name for music). This ‘music’ is not usually thought to be literally audible, but a harmonic and/or mathematical and/or religious concept. The idea continued to appeal to thinkers about music until the end of the Renaissance, influencing scholars of many kinds. (source)Wikipedia

In the beginning was the Word and the Word was God. Sound, the source of creation. Let us examine it in the conformist light of our dear academics. That of Wikipedia. That of the soft consensus of the all-powerful ignorant who are making the law at this time. Then I will share my thoughts. You’ll make the menu. 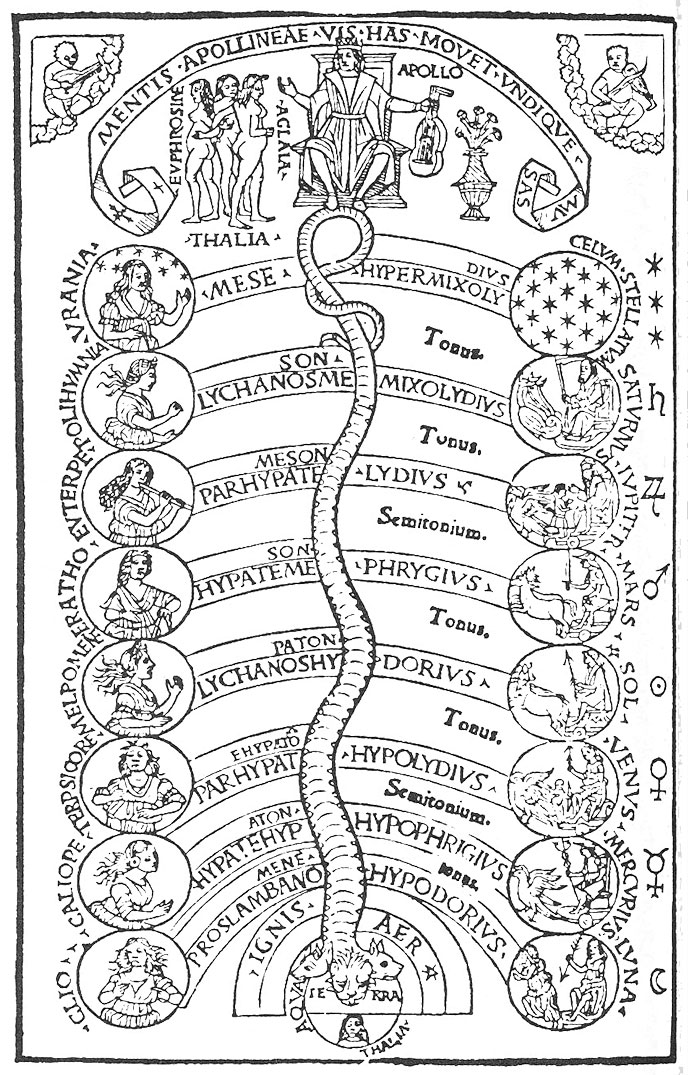 The power of sound, the effect of certain sounds combined with certain rhythms, is amazing. Certain overacute sounds can break glass or crystal. The Bible evokes the destructive role of such sound frequencies in the episode of the trumpets of Jericho.

Joshua led the Jewish army against the Philistines entrenched behind the high walls of Jericho. The Jews mouth their trumpets, they go around the city ringing them. In the third round, the walls collapse. We know that a regiment that goes at a pace can bring down the strongest bridge: that’s why the troops are instructed to stop the rhythmic step to cross a bridge. Can the walls of a city collapse for the same reason?

The march makes the bridge vibrate because the step of dozens of men hits the apron in cadence. As long as this rate corresponds to the frequency of the bridge, it collapses. Even a modern bridge does not resist. When a violent wind subjects it to a vibration that corresponds to its frequency, it will twist and break apart all the more dramatically as it is high and long. This is why we test in wind tunnel models of all future bridges, like aircraft fuselages.

The covered alleys were once positioned on chakras of the earth. They were awakening lodges by concentrating under their vault the flow of the Vouivre. The Romanesque crypts work in the same way. Land-based energy still pulses there, often, as long as the groundwater flow is not dried up or diverted for agricultural purposes. Dolmens like churches are sacred buildings. Their polarized stones transmit energy optimally as long as they are animated by a groundwater stream. 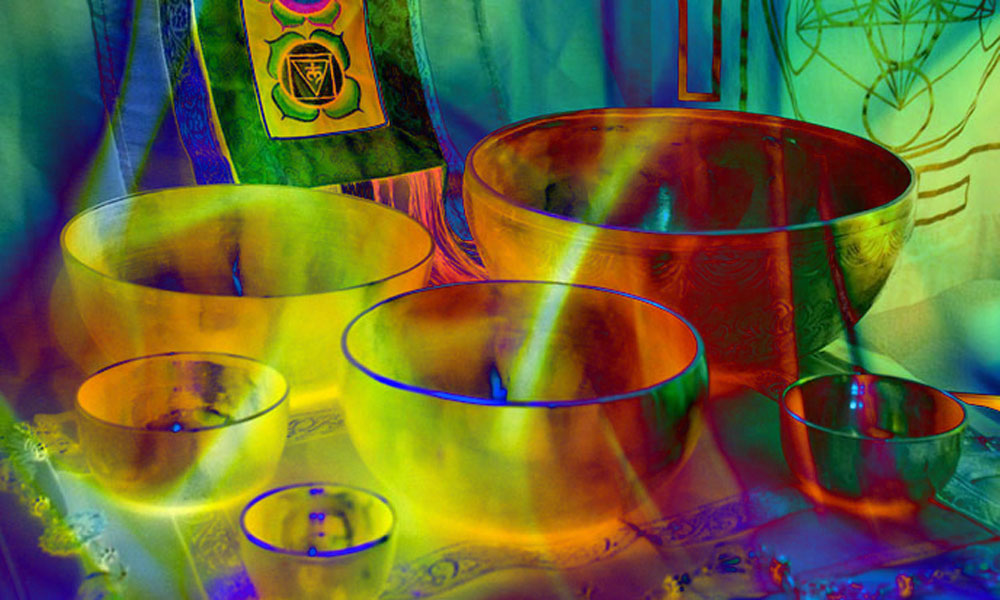 You carry your door

The covered alleys like the crypts concentrate under their vault a powerful telluric energy that makes them doors to the great elsewhere. And that’s what they are according to their builders, the Tuatha Dé Dana-ann. They called them “Doors of the Sidhe”.

For this people of giants, the Sidhe is a parallel world which has many points in common with the astral world well known to the mediums, shamans and warriors of the Nagual. Practice has shown me how these doors can open, and how far they can lead. There is the art and the way to roll under the stone table. One can use its power, focus its intensity on the destination or the person of one’s choice to be there immediately. In astral, one can understand.

When you vibrate a Tibetan bowl under a covered alley, you get the impression that the sound comes from nowhere. Or rather from everywhere at once. You’re in the heart of the sound, wrapped up to your ears in the sound vibration — and the door opens. We may need a place and a sound to open the door. But the dolmen is not the door. Nor the sound. The door has always been in us.  You carry it in yourself.

To glide a little, here is the oldest known music, it comes from Sumer, it was played there 55 centuries ago…

History is a lie agreed upon.

What do I think of all this, so many centuries later? I’ll tell you. Look carefully at the image that follows. In the center of a farandole of planets is an ancient musical instrument. See the shape of the two sidebars. Doesn’t that ring a bell? Yet it’s obvious: telephone handsets. At the top you listen. At the bottom it’s the microphone. It already existed in protohistory!

My loyal readers already know what to expect. If we find so many traces of modern technology in distant times of protohistory, it is because we have forgotten the second principle of thermodynamics: “Any transformation of a thermodynamic system takes place with an increase in global entropy including the entropy of the system and the external environment. It’s called entropy creation.”

This principle is summed up in a simpler form: Over time, everything degrades. This is the law of entropy. Why would we still want to believe, in these conditions, in the reality of progress? We have always lived in permanent decline. Long ago, this world experienced technological advances that Egyptian and Greco-Latin antiquity used to “rediscover” physical laws and manufacturing techniques directly inherited from the former gods.

Ignorance is the mother of all vices. That is understandable. The ancients, stunned by the countless prowess of the astronaut gods, how could they name these flying balls? Depending on their size, they are wandering planets. Singing balls. Musical spheres. The unfortunate had not seen Star Wars. They could not recognize a mother ship or a spaceship.

Once again, a very real and material physical phenomenon is interpreted in a symbolic, abstract, bizarre way, when it is not.

We saw the same process at work in the mental interpretation of yin-yang, or in the smoky exposition of the cave myth by Plato. We also saw how a medieval religion substituted its invention instead of the cross that adorns our crossroads since the dawn of time, and that has nothing to do with a crucified god.

Protohistory was a brilliant period, marked by technological advances unparalleled today. Visitors to the stars were not content to develop the human species from their genetic bank. They brought their progress, their vision of the world, their teachings to which our forefathers understood nothing. Weapons, flying machines, rockets, all the technology inherited from our creators was developed here, on Terra, the third planet (ter) of the solar system (ra). As for this curious thing in the picture… look carefully. 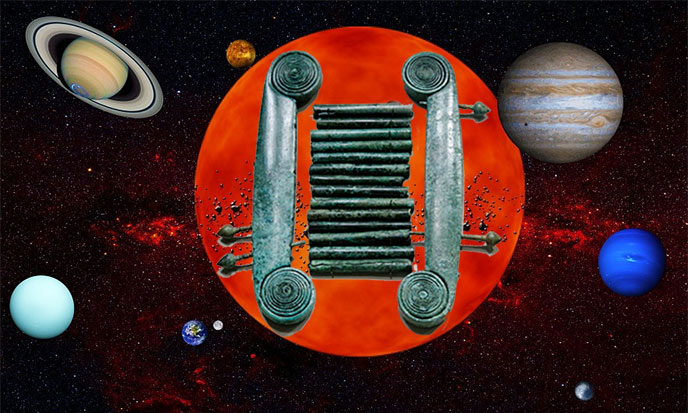 No doubt: these are phones. If the ancient luthiers have chosen this particular form, do not see in it some astonishing coincidence. They had an excellent reason: to pay homage to the former gods by imitating one of their gadgets. A magic trick to talk to the absent. The sacred object par excellence. You could hear the voice of the gods!

Certainly the homage is incomplete because the copy does not work. Because it is only a tribute, a fake imitation that made music, failing to emit voices. The instrument makers of antiquity made it a musical instrument for lack of better, because they no longer possessed the technology of the telephone. The pre-ancient gods left and took it with them, like everything they had of value.

The proto-history is certainly not a half wild period, certainly not the beginnings of civilization, quite the contrary. It is a period more advanced than the historical period by many aspects. Thank you the gods of before! The Greco-Roman Antiquity rediscovered as well as it could, and often very badly, the revelations of the early times. And modern times still have a hard time going back…