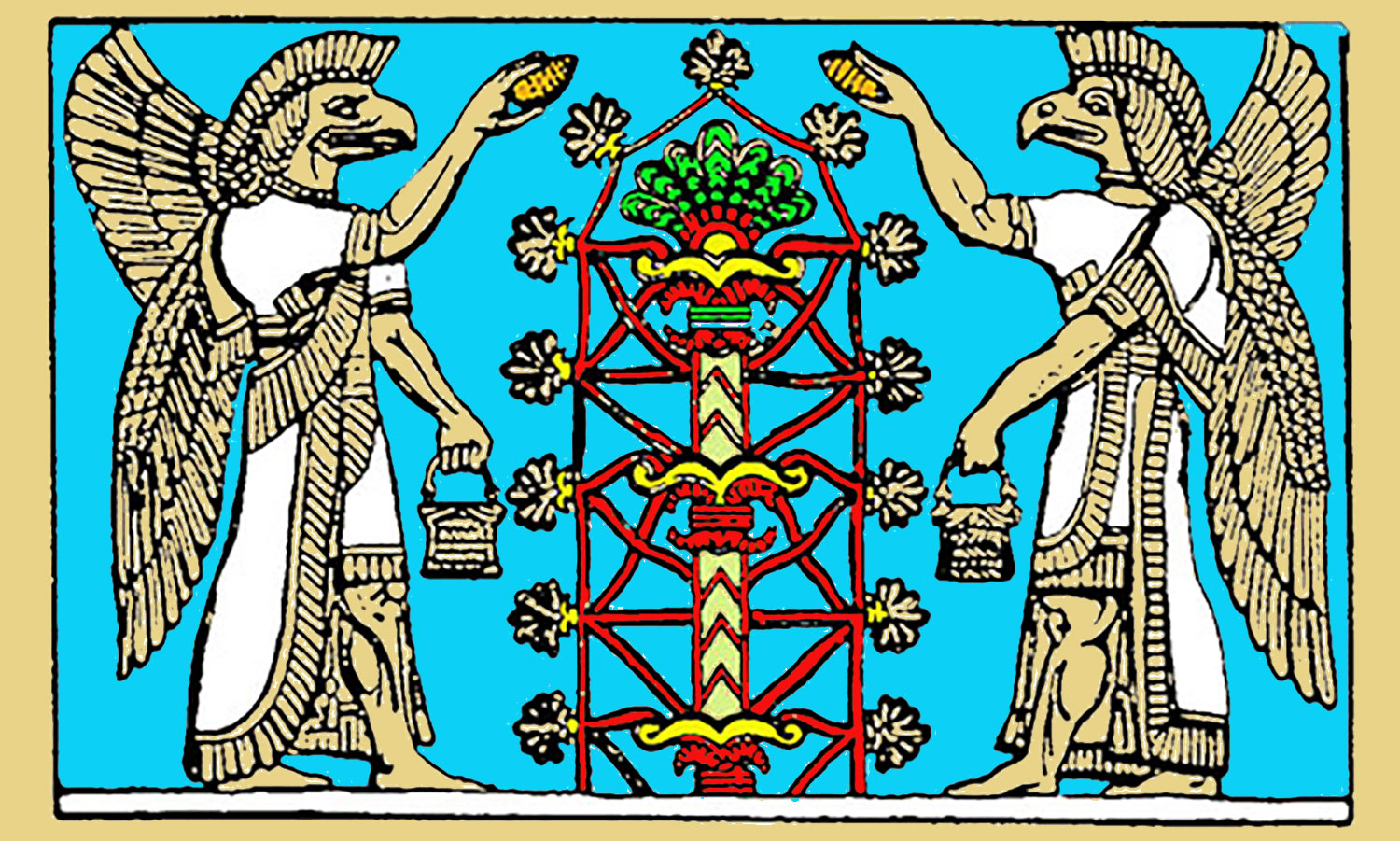 If the Old Testament appears straight out of ancient texts of Babylon, no Sumerian myth tells of the fall of man as was told in the Bible. This time, the Hebrew writers have used another source that we do not get. However a cuneiform poem could well be the source of the story of Genesis.

The Tale of Adapa was found in two places in the ancient world: El-Amarna in Egypt in the archives of the Egyptian kings; and in the encyclopedic library of the Assyrian king Ashurbanipal. It is assumed that this distant time, this tale was known everywhere. Just as in the Epic of Gilgamesh, the subject of this story is the quest for divine immortality, as in Gilgamesh, the quest ended in failure. ll there is great similarities between the two stories, and despite some differences, one may wonder if it is not the same hero. While Gilgamesh is presented as the first king of men, Adapa is a perfect prototype of Homo sapiens, designed and built by Prince Enki in his Abzu. Remember Enki’s Abzu was a secrete estate he owned underneath – in the hollow earth.

“With great wisdom, Enki gave him wisdom, but not eternal life” this is the beginning of the tale. Enki’s wisdom was elementary caution to avoid possible rival. Anyhow Enki uses his smart prototype as a servant. He teaches him to make all kinds of services in the home and in the fields. On this reading, it is troubling that we have imitated this guilty casually inventing slavery. Moreover, we have not invented: it is gods’ example.

Adapa got no time to rest, and a plenty of jobs: hunting, gathering, fishing for his master, cooking and helping his Prince like Friday with his white god Robinson. One day he was fishing, Adapa suddenly saw “the South Wind that rose and flooded the boat.” In great danger of capsizing, Adapa lost his temper and “broke the wing of the South Wind.”  How can the wing of a wind be broken? Everyone knows that the wind does not need wings to fly.  Only birds have wings. Birds, insects, angels … and airplanes.

The Myth of Zu, another Sumerian poem confirms this track: Zu is struggling with the gods, who send him several weapons to beat him. One of these weapons, the South Wind, will wound Zu. In the myth, it is clear that the South Wind is a killer drone. Automatic hunting aircraft, patrolling along the border to destroy everything that presents. The Land of Gods was well kept. Especially the area of the spaceport, true umbilical cord linking Lebanon to the orbiting Gods’ mothership. Myths are written in a coded language that one has to decrypt. In light of the Myth of Zu, we will be able to read the Tale of Adapa otherwise.

“Meanwhile, in his heavenly abode, the chief god Anu is worried because the South Wind did not blow on the earth for seven days. His deputy investigates and informs Anu that a mere mortal has put off. Full of fury and contempt, Anu summons Adapa human in the mothership.” (source)R. A. Boulay, The Reptilian Past of Mankind

This is where we learn that Adapa the human – with near beast a status to the chief god Anu – got his own shumu. A shumu was a personal space shuttle he piloted perfectly. Gee! this Adapa is not a normal guy. Of course not, since he is a special prototype that Prince Enki has developed for service. Enki gave him all the tools to work, and the shuttle is included. Adapa also received weapons – otherwise how could he broke the wing of the South Wind?

Enki the rebel prince was the creator and defender of mankind. His Greek counterpart Zeus Prometheus brave in defense of his creatures, which will culminate in exile. But not in Russia, not “beyond the Scythian plains” as stated by the Greek poet Aeschylus. Enki was exiled to America with his son, and all his people. For now, the prince protects Adapa and briefs on how to behave in front of the mighty Anu.

“Up there, he said to his protege, no funny tricks. You better remember it every single second.”

Then prince Enki lavishes great advice. Thus, he hopes, Adapa should be able to overcome the trials that Anu, his dear uncle, is sure to hand him. “First tip: you won’t go to SipparBaalbek spaceport in DilmunLiban. Here the gods are strong together they buzz like bees – you will lose your means, if not your life. To go to the star city of Anu, you will take the shumu I made for you. Your shumu will easily take you to Olympus Hyperborea Avallon Nibiru – the radiant city of the gods in space. You can not miss: it shines above Borea as a nearby star.”

So that’s what Adapa did. He arrived at the all-powerful gods in his personal shumu, as if god himself, not a mere mortal created by his master geneticist Prince Enki. Then he landed his shumu next to the Superior Gods’. The Sumerian word shumu – which derived the Hebrew word shem – means name, or fame. But it has another meaning according to R.A. Boulay: rocket, or UFO, or Vimana in Sanskrit. His erudite and sensible demonstration convinced me.

Anu is impressed by the intelligence of Adapa. He wondered how this half-ape could acquire forbidden knowledge, which are reserved for gods and their semi-divine bastards. The god of gods is said that this is not a Adapa like other livestock. He asked angrily, “Why Prince Enki he disclosed to you in terms of earth and heaven to you, half-ape, human slave strain vile and worthless, period, without any force? what right have you insolent he built a shumu? “

Adapa kept silent and felt no fear, as his master told him. Suddenly calmed, the powerful king said blandly, “Drink this Water of Life, and live eternally Eat this bread, and your pineal gland will glow giving you divine powers that you miss. Stay here with the Snake Gods and you will know eternal bliss!” But to get it, he must renounce his human appearance, and agree to become reptilian like all the eternal gods. Enki warned Adapa to refuse any food, any drink if he wanted to come back to earth safe and sound.

The pineal gland is also called the gland of awakening. It can be concluded that the Water of Life of the gods was a magic potion that gives enlightenment, and his divine povoirs. And eternity and youth, for that matter. Sumerian priests are represented with “situla” or brandy bucket in one hand, while in the other they raise a pine cone at the height of their eyes. It’s not a fruit, or anything that may be eaten, as some scholars have imagined. This is the pineal gland. This gesture means enlightenment.see on top 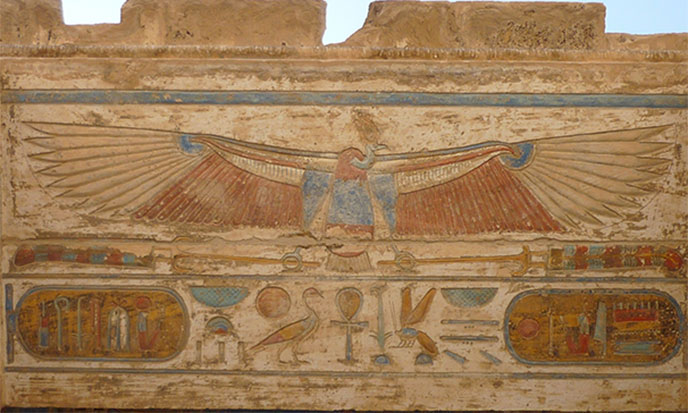 Adapa hesitated eternal life, tempting gift. Enki has warned him to refuse! So he does refuse. Anu is furious at the affront. He feels a scheme hatched by his nephew, this cheeky Enki who respects nothing. “Why do you refuse eternity and happiness, you stupid monkey?”

Adapa naively replied that his master told him not to accept anything. That does not calm the anger of the god of gods. Anu sends an archangel to punish this dog Enki. Adapa is said that his last hour has come. Anou relented but it was too late to Adapa Symbolically, the man had missed his chance to have eternal life Adapa retournna on earth, a journey during which he saw the wonders of space. “As Adapa could see the sky from the horizon to the zenith, he saw its glory.” (source)R.A. Boulay, The Reptilian Past Of Humanity