“To the whole world I declare that the earth is hollow and habitable internally,” said John Cleves Symmes in 1818. Needless to say, this statement made the biggest noise. And it was not the first time. Neither the last.

Symmes believed there was another world beneath our feet, where superior men, bigger and wiser than us, bathe in the light of a central sun that never sets.

He spent the rest of his life to defend this thesis, which in turn influenced many fiction writers as Jules Verne and his Journey to the Center of the Earth or even Edgar Rice Burroughs’ Tarzan at the earth’s core. Which, not surprisingly, made the hollow earth theory increasingly popular. In 1900, two new essayists take up the Symmes theory, developing it. 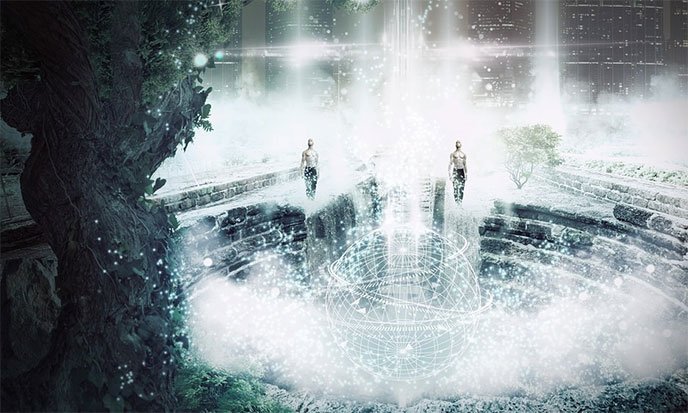 For Reed and Gardner, the earth is hollow, open at the poles. Reed imagines that auroras are actually the reflection of light phenomena that would happen inside the earth. Perhaps volcanic activity? His books are not successful, but the idea is gaining ground. Later, Raymond Bernard wrote in The Hollow Earth:

“We saw something so strange that we stood in silent amazement. In the open sea before us, stood suddenly a sort of big mountain where, at a certain place, the ocean seemed to spill! Puzzled, we went in that direction and we soon found ourselves trying to navigate a vast canyon leading to the center of the Globe. We were not out of surprises. We realized later that the sun was shining inside the earth.” (source)Raymond Bernard, The Hollow Earth

Helena Blavatsky, a famous esoterist of the 19th century, concurs with the thesis of Agartha, an underground Atlantis.  This underworld is not identical with the hollow Earth, but it makes the hypothesis even more appealing.

The scene is set, the earth is a hollow sphere with two openings at the poles, and at its center a shining sun that does not hide.

This inner sun maintains within a mild and pleasant climate, which special light much extends the people’s lives.

Because there are inhabitants

Beings more beautiful and stronger than us, having a lifetime much longer than ours. Beings may well be called gods. It reminds us of something.

Let’s see? By scanning the Greek mythology, the story emerges of Ouranos who takes refuge in the underworld. But not only in Greece …

In Celtic mythology, the Tuatha take refuge in the underground world of Sidhe. In Christian mythology, under the earth is the hell where the damned will stay for eternity.

And in Sumerian mythology, Enki the creator god, tired of his ongoing clashes with his brother Enlil, left the surface land to Enlil who became the administrator, in Sumerian the Sadam, or Satan. And Enki-god where did he go? He joined the Abzu.

According to Sumerians, all planets are hollow and their inner space is called abzu. Such a share between the upper world and the world below is identically found in Egyptian and Greek mythologies. As well as in Roman mythology dell’inferno.
Sovereign of the world, civilizing god Osiris taught the Egyptians the law, agriculture, and respect for religion.

But his popularity with his subjects, provoking the jealousy of his brother Seth. It kills Osiris, the dismembered, and scattered the pieces across the country. Isis, sister and wife of Osiris, collect what remains of her husband and, with his incantations, managed to resuscitate him.

Then what is conceived Horus, who avenged the death of his father. and who will reign long time on the land of Egypt… or that of Atlantis. As for Osiris, he joined the underworld where he became the ruler of the realm of the dead, and the judge of the souls of the dead.

In Greece, after the victory over Cronus, Zeus rules the Earth, Poseidon rules the Sea, Hades and  Hephaestus rule the hell and the underworld.The presence of this world beneath our feet is definitely recurrent in many traditions.

All these people would have been wrong, stupid or naive? We are not the best nor the first to think. The Mayans are supposed to be the keeper of undergrounds dug millennia ago by unknown machines. These tunnels pass through Latin America, extending their ramifications from the Gulf of Mexico to the Antarctic.

I believe myths to be the will of the gods; in any myth, nothing is useless. Even such an incredible legend deserves to be taken seriously.