Tezcatlipoca is a Nahuatl name meaning “smoking mirror”. (source) It is the name of one of the four main Aztec gods, it is also a common name that applies to each of these founding gods. Tezcatlipoca, god most feared of the Aztec mythology, is the second son of four Ometecuhtli and Omecihuatl, parents of four Tezcatlipoca: Xipe Totec red, black Tezcatlipoca, Quetzalcoatl white and blue Huitzilopochtli. (source)

Here we find the same idea as the Maya: the four jaguars with the four colors of human races. Xipe Totec is the red race, Tezcatlipoca is the black race, and Quetzalcoatl is the white race.

As for the last, Huitzilopochtli, he should represent the yellow race, yet he is blue. As the Smurfs. As the Avatarians. As the people of Aquablue.a French comics that inspired Avatar But mostly, the blue colour means the divine race, which is still present in the memory through the title of “blue blood”, which, in many languages, refers to the nobility, the ruling caste, the sons of the former gods. 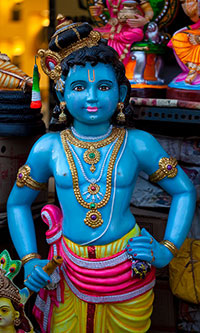 Who knows? In any case, Krishna is blue. Some black people have very black skin with blue highlights. Kali is blue as well. Osiris is blue, Nut is blue like the starry night she symbolizes. The sky is blue, the outer space appears dark blue. Were they blue skinned, those supermen who came from the faraway stars? Nut the Egyptian, the Blue Night of the starry space, Nut is our heavenly mother. First representation of the mother goddess we find in almost all mythologies, she has the attributes: the thunder is her. But not the thunderbolt that kills, burns or destroys. The lightning that animates, awakens and flourishes.

Thunder is the laughter of Nut. And when she cries, her teardrops fertilizes the soil. Black Tezcatlipoca is also associated with the night.

Another thing: none of the Maya and Aztec main gods to represent the yellow race. Why? I assumed in another article that these gods represented only the races present in this part of the world. The red race -the oldest probably- with Blacks from Africa and Whites from Scandinavia. Note however that Tezcatlipoca body is all black, except for his yellow striped face.

According to Aztec legend, Black Tezcatlipoca shamed the first god, White Quetzalcoatl who fled the country on a raft of snakes. But this racialist legend is, in my opinion, too recent to provide any indication of the true Tezcatlipoca. Before being black like mica, Tezcatlipoca is a steaming mirror. Or he’s the master of this mirror. 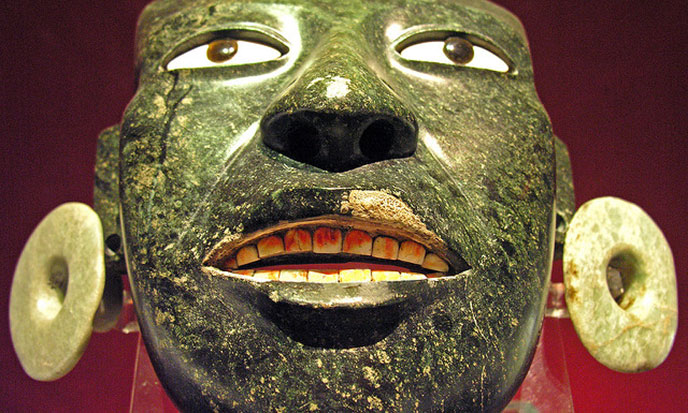 Tezcatlipoca is a magician. Spells master, he can also reveal dreams and real images in the Smoking Mirror. What if it were the screen of a TV or a PC? If it were a laptop or a pad?

According to legend, this mirror was polished obsidian plate, the surface is disturbed by the will of Tezcatlipoca to reveal near and far images from the past, present or future. I think it may be a technological object. Put a 11th century man in front of a flat screen, he will see a polished slab of obsidian. This is the natural material that most resembles a screen. And the wild has no other word to describe what he sees.

This Mr. Clarke, for the record, is the author of fabulous SF books, like 2001 A Space Odyssey or Rendezvous with Rama. His feather is golden, his words are crystal clear, his novels are diamondlike. In this case, Tezcalipoca is a portable TV that all gods can use. For the savages who witnessed it, this television set is such an unimaginable power that they personified it. The Smoking Mirror, divine gadget, became a god himself for their descent.

This is how all the myths were told and distorted by generations of savages who had no word for science or technology. So they talked about the magic of the gods.

All myths were narrated and deformed by wild generations who did not have any word for science or technology. Then they talked about the magic of the gods. Any sufficiently advanced technology is indistinguishable from magic.

If we see the Smoking Mirror as a human person, Quetzalcoatl and Tezcatlipoca form the universal god-devil tandem that is found with Osiris and Seth, Enki and Enlil, Zeus and Hades, Yahweh and Baal. He sided with the Aztecs, the dark god chased the offending God, he taught the men to follow the rules imposed by the white god.

Tezcatlipoca represents the second generation of terraforming astronauts, he would be the equivalent of Prometheus, or Dionysus, the gods who took over from Zeus. Because contrary to their claims, the terraforming gods are not immortal. No living being is. They claimed the opposite, because they could afford it: with a life a hundred times longer than ours, the lie was unverifiable.

And that’s not the only lie these false gods made us believe. Because if we see Smoking Mirror, no longer as a living god, but as a television screen, we can well imagine how the former gods exploited this false miracle. The savage witnesses of the thing were very close to worship.

This is not the first time that my mythological research has led to an ancient confusion between beings and objects. The same order of things happened with the kerrubim of the Bible and the holy Jewish books. They were taken for super angels. I believe they are devices of death and final destruction. Kerrubim are the tools of extermination, they exterminate species that proliferate inappropriately: if this proliferation endangers the balance of the biotope and the good health of the planet.

This article was reviewed and completed on December 5, 2021