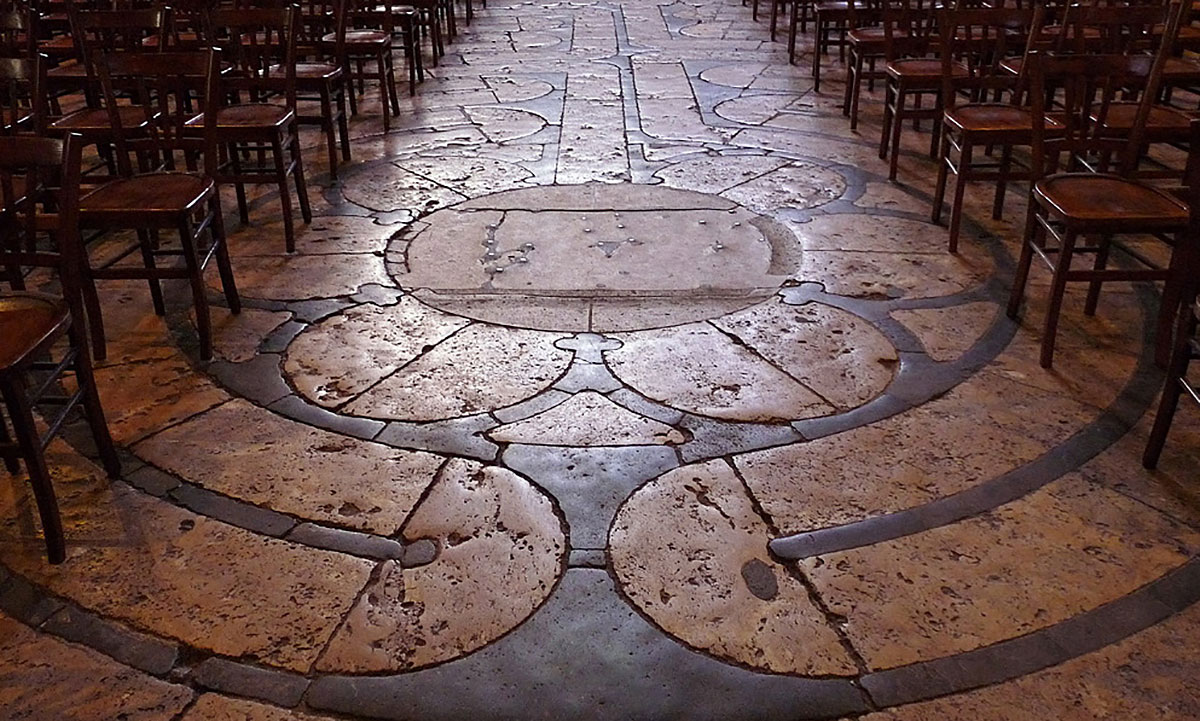 I have a great affection for medieval sacred construction. Gothic cathedrals and Romanesque churches, crypts and labyrinths have always fascinated me. I have a very special tenderness for Chartres, its hill, its cathedral and its labyrinth.

The sacred hill of the ancient Druids overlooked the ancient Carnutes forest, destroyed by the tail of Gargantua’s horse, if Rabelais is to be believed. Now in place of this magical forest, the giant tractors of the Beauce cereal producers produce industrial wheat.

All cultures, all wisdoms have sought harmony, with a beautiful constancy and more or less success. But it is undeniably in the Far East that the art of perfect balance between the forces of nature has found its most subtle developments.

Feng Shui is a Chinese art that seeks to balance the energies that surround us in our homes, our workplaces. By the link of the man, Feng Shui connects the telluric energies to those of the cosmos. People who live in places where energy is harmonious have a happier life, a more united family, higher incomes and healthier lives. In the Chinese mentality, everything is codified, everything has a double meaning, nothing is innocuous. In ours, more Cartesian, everything is measurable.

Largely inspired by Feng-Shui, geobiology is the quantified study of cosmotelluric influences on life. The cosmotelluric activity is measured on a scale, that of Bovis. To this day, the most powerful point is the eye of the labyrinth of Chartres Cathedral, which vibrates at 18,000 bovis, slightly ahead of the Potala in Lhasa, Tibet, whose nodal point vibrates at 17,800 bovis.

The eye is the central, usually circular, part of a labyrinth. In the same way, we are talking about the eye of a cyclone. At the top of the Bovis ladder, therefore, there is the eye of the Labyrinth of Chartres. It is the central point, in the form of a rose, of a large labyrinth embedded in the pavement. Before doing so, the pilgrim describes a spiral path, or rather a double helix, because of incessant U-turns. This eye shares the highest vibratory rate known with the Potala in Lhasa.

We know that the present cathedral was built on a powerful dolmen, at the top of a Druidic hill. At the time of the Gauls, the hill of Chartres, where this great dolmen rose, dominated the forest of Carnutes, sacred forest for the Druids, which became the plain of Beauce. It vibrates well, this old dolmen, with its celebrant’s point just under the eye of the labyrinth. Admittedly, we do not visit it — its existence is even a pseudo secret.

Under the nave, a crypt is open to the public. It includes a side chapel and a central space enclosed by a thick wall. Behind hides the powerful dolmen of the Carnutes. Hence the labyrinth above him.

Just for that, Chartres is worth the trip. The visitor wanting to test the power of this chakra of the earth has only to hold it for a moment. He will feel a subtle flow through his feet to the head … the rest of the feeling must be lived. The experience is safe, but watch out for the load: leave at the first unpleasant feeling.

If you want to attract someone to a point of energy, draw a hopscotch on the ground, taking care to position the hopscotch sky on the vibrating point. All children, and even grown-ups, will put their feet in the semicircle of the sky.  Thus they will feel the energy entering their body.

The pavements labyrinth is working the same way. It urges us to travel to the end of its spiral to savor the triumph of the central point, which is vibrating divinely.

Or, failing to go through the spiral as a whole, it invites us to hold a moment on its eye. Turning your back on the choir, plunge your eyes in the big magic rosace. And leave the place to the feeling from the eye.

For many people, in this corner of the world, the round is the labyrinth of Chartres. We don’t soon forget his first stay at the start of the Camino de Compostela. When you finally stand, barefoot, in the center of the eye. Unable to tell you about my first meeting, too far away, with this devastating eye, I give the floor to Anatole who experienced it recently:

Approach Chartres Cathedral once again. Before even entering it, you will learn a detail that only a lover of its history can reveal to you: by entering by the right door, you pass under a devil so sneering that it would almost dissuade you from continuing. An hour later, when, calm, you go out on the other side, it is a sleeping twin who will accompany you. One of the mysteries of Chartres which conceals many others. Go forward into the nave. Choose a seat, strip your feet, stand on top of the labyrinth eye, your back to the choir. 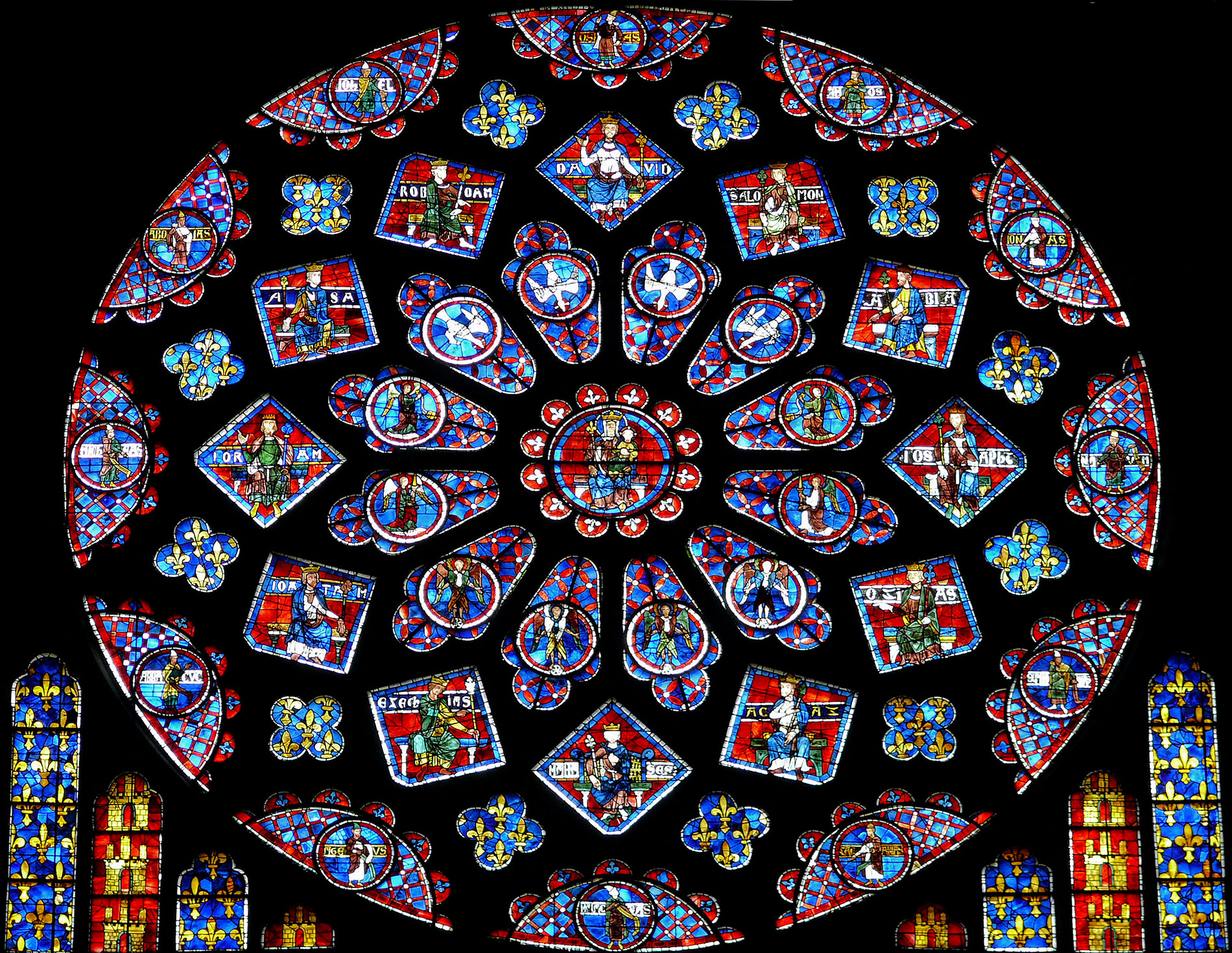 So take a look at the huge rose window. In a few seconds, it comes alive, deforms, bursts in all directions. A strange sensation enters your body. Suddenly, you have the feeling of falling back. A voice whispers to you “withdraw”. The streak lasted barely a minute. My guide, apart from these two words, revealed nothing to me about what to expect. The other “novice” will experience the same sensations. But it is not finished.

Immediately out, we find that our laptops, charged the same morning, have become unusable, dead batteries. How to explain such a phenomenon ?

Alas, Chartres does not indulge in the first comer. (source)

Anatole makes me laugh. If he had come here without me, would he have experienced the same phenomena? Let me doubt it. His subtle perception capacities are not developed enough yet, he needs a guy of my ilk to boost his fine sensations. Which was unquestionably the case. Anatole still talks to me about it, he didn’t get over it.

He returned with a receptive friend, he told me. Probably not receptive enough, because as I would have bet they did not feel anything at all. You’re right Anatole, places of power do not give themselves up to the first comer.