I, Aorn son of Thyann, also called Enoch the traveler, Enoch the apprentice, Enoch the bard, I’m afraid to die the first night. Just arrived at the Reptilians, day of madness, I lived tons of insane stuff. I do not know where I am, my head is dead.

One hundred years at this rate, for sure I could not stand. I had learned from cyclops to protect me by mechanical or cybernetic inventions. I knew to do almost anything with a spring and clothespin in less time than it takes to hit this on my keyboard. I had learned with witches how studies are conducted among powerful representatives of distant stars. Each one is formed as he wishes, according to his rhythm and his fantasy. To instruct the body counts as much as to nourish the spirit. And the education of the heart is always at the rendezvous. I thought myself complete, clad, ready for anything. I did not see anything.

The island where I had just set a hesitant foot was the kingdom of Reptiles. All my experience of two centuries, all accumulated knowledge is useless. These people are not like us. At home, it’s out of the question to learn as you please. They are known for their great intelligence and exponential memory. The program of studies is considerable there, it is necessary to develop its 36 most sharpened senses, no question of wandering or balking, it is chew or dream. I found myself immersed in the distant past of the Earth. I have lived hundreds of lives, rubbed shoulders with thousands of people, fought millions of battles, all in one day, appalling, endless. I am broken in pieces. This first day of teaching reptilians was so dense that it seemed to last a lifetime!

“A life, no doubt, said Sanghor the reptilian. But a life of one hundred years. Where you thought you were living an intense day of discovery, you lived a hundred years among us, and you know all our secrets, big and small.
– What do you mean ? I’m afraid I do not understand, I replied, upset.
– Let’s say you’re afraid to understand. The hundred years are up. It’s time for you to leave this island and our company.

That’s what I did. I spun without asking for my rest. For a whole long day of a hundred years, Sanghor the Reptilian told me in 6D the so-called of the past. Everything is engraved in my body to the word. This is what he told me about origins.

Two billion years ago, an extraterrestrial expedition arrived on the third planet of the solar system, the Earth. I, Sanghor the Reptilian, am very old, but I was not born yet, neither my father nor my father’s father. Darthgan, the first ancestor of my lineage, commanded a reconnaissance and intervention patrol.

The Earth lived its first age, it was a wild, uninhabitable planet. His landscapes looked like terrible chaos. We did not distinguish the waters from the emerged lands. Everything was disproportionate, hostile, dangerous. Mist and fog covered the ground with a uniform sail that made any exploration of the land hazardous. Darthgan and his patrol hovered on the surface of the waters.

We reptilians are specialized in this type of mission, make the planets habitable. Most often, we simply arrange the interior. Because all the planets are hollow. And all the planets have an inland ocean not of salt water, but of fresh water, very pure and mineralized. The ocean lines the edges of the inner world. In the center, visible from everywhere, shines a big crystal of auriferous quartz. All planets, all natural satellites are just envelopes around a large and comfortable interior space. This interior emptiness is the best place to live away from the dangers of the surface.

To move from one world to another, we have the traveling star on which you are with me. You call it the Sun because it shines with dazzling light. It’s not a sun but a floating paradise, a perfect world. In any case perfect for the gods, since it is made for them. Your descendants will give it a thousand other names: Nibiru, Hyperborea, Sky of the Intelligibles, Paradise, Eden, Celestial Venice, Sidhe, Walhalla, Tlalocan, Gwenwed, Amenta, Olympus, Island of Light, Beyond …

It’s the size of a planet, it has the shape, it has several continents, a mountain range, four mighty rivers, but it’s a spaceship. The gods have all the facilities that make life a dream of every moment. As you understand, each continent has its own laws, adapted to the people who live there. 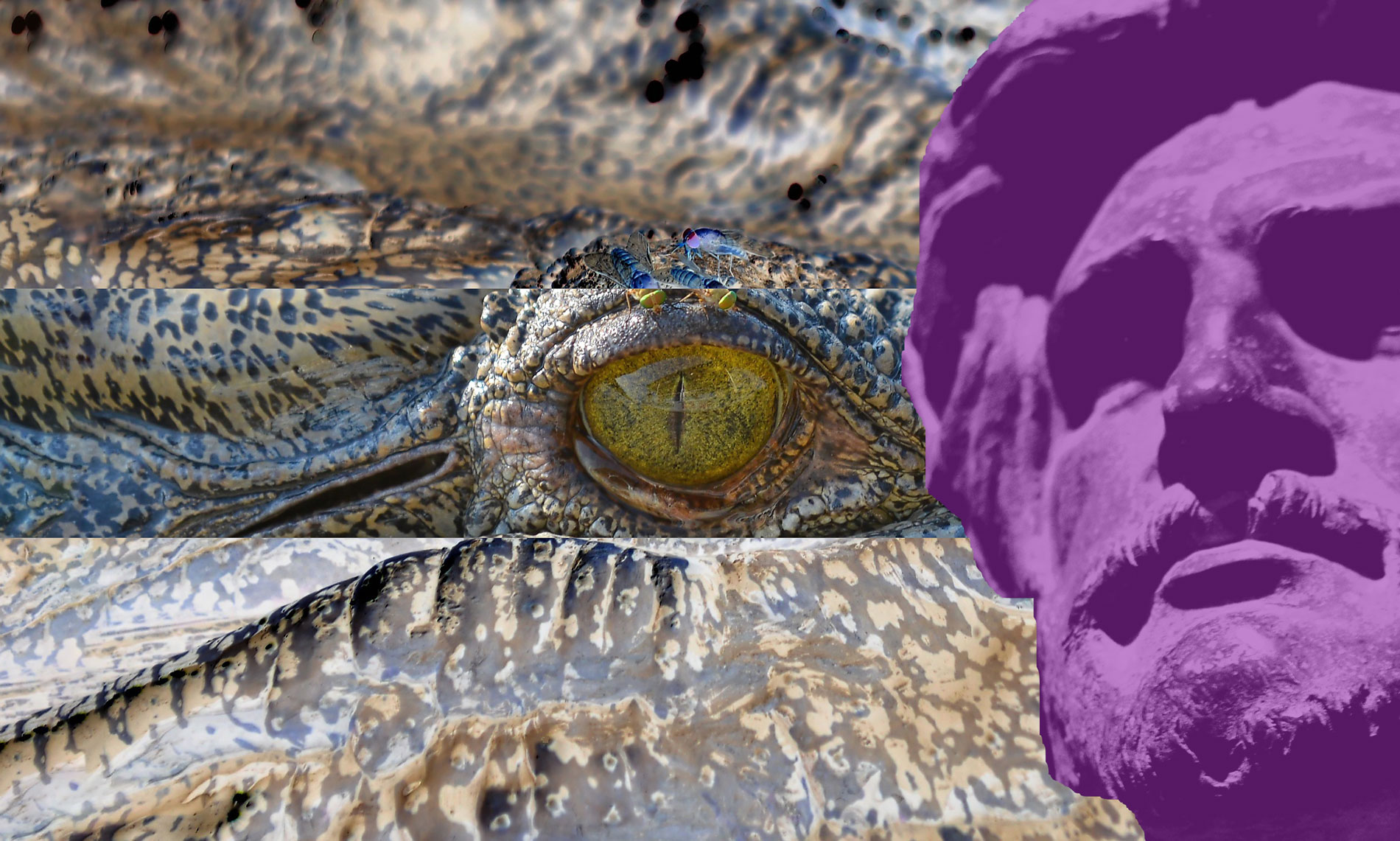 The island of Reptiles where we are is the place of remembrance, the absolute memory of the worlds. The reptiles are the oldest, the primordial, the great fathers of the world. Before the tender flesh of humans could flourish, it took a long time for the hard scales of the reptilians. We are the first people on this planet. Children of the fish, relatives of the birds, we gave you the organ of eternity which lodges in the heart of your skull and which one names the reptilian brain. This precious organ makes it possible to go back in time, to go up the time and to take apart time. That’s what you’re doing right now. Be careful, do not go out of the memory bubble where my mind holds you in spite of your jolts. Calm down. Stop gasping around, you will cut the contact.

Without warning, I found myself at the witches’ house. Time and space behave oddly on Reptile Island. It’s hard to fix. Back on the island of witches, the world of women. The few males are servants or visitors. I started a beautiful story with a passing man. Orane is the name the witches gave her. A juicy blonde with good red cheeks and small apple breasts. So round, so blonde she was, Apple is the name I gave her.

Jogging around me slices of life with her. As we were, as we lived, as we loved each other, what we did together. Before me, Apple was a young virgin for the feast of above. By the witches, she was introduced to the finer points of sensual pleasure – not her pleasure, of course ! That of the powerful. Her doom: sacrificed on the altar for Gods pleasure. I was her first love. After, she was much less a virgin. When she got pregnant, the witches grew mad. Orane had known the male, my sweet Apple did not interest them anymore. They fired us like messes. I had to row ten years to return to the Sun. My darling wanted to stay on earth to raise our baby.

Apple ! Perfect fruit! King’s piece! The softness of your silk fingers, the warmth of your arms, I am in you. Oh, the long years on earth, before the gods from above took me back. I was a man, nothing more, nothing less. I had taken a wife, she was fat with our child. Long years of happiness and peace on an island off any coast and hope, away from human eyes. But the gods see us wherever we are. They have eyes everywhere. They do not lose sight of me. One day, for my joy, they took me back. I have left my wife forever, and my child who must have died of old age centuries ago, poor little thing!

Poor me, rather. Is every goodman good? Every place, every life, every home where I live or die, I passed like the rumor, I vanished like the noise. A derisory toy in the infinite kaleidoscope which constantly recompose the multiverse, I am the nothingness, I am the source, I am the I, the game. A dream of existence that wants to be an existence of dream? No respite, no rest, it starts again. It takes me back. A hundred turns in the drum of a wringer, and I am dry, ready to iron. 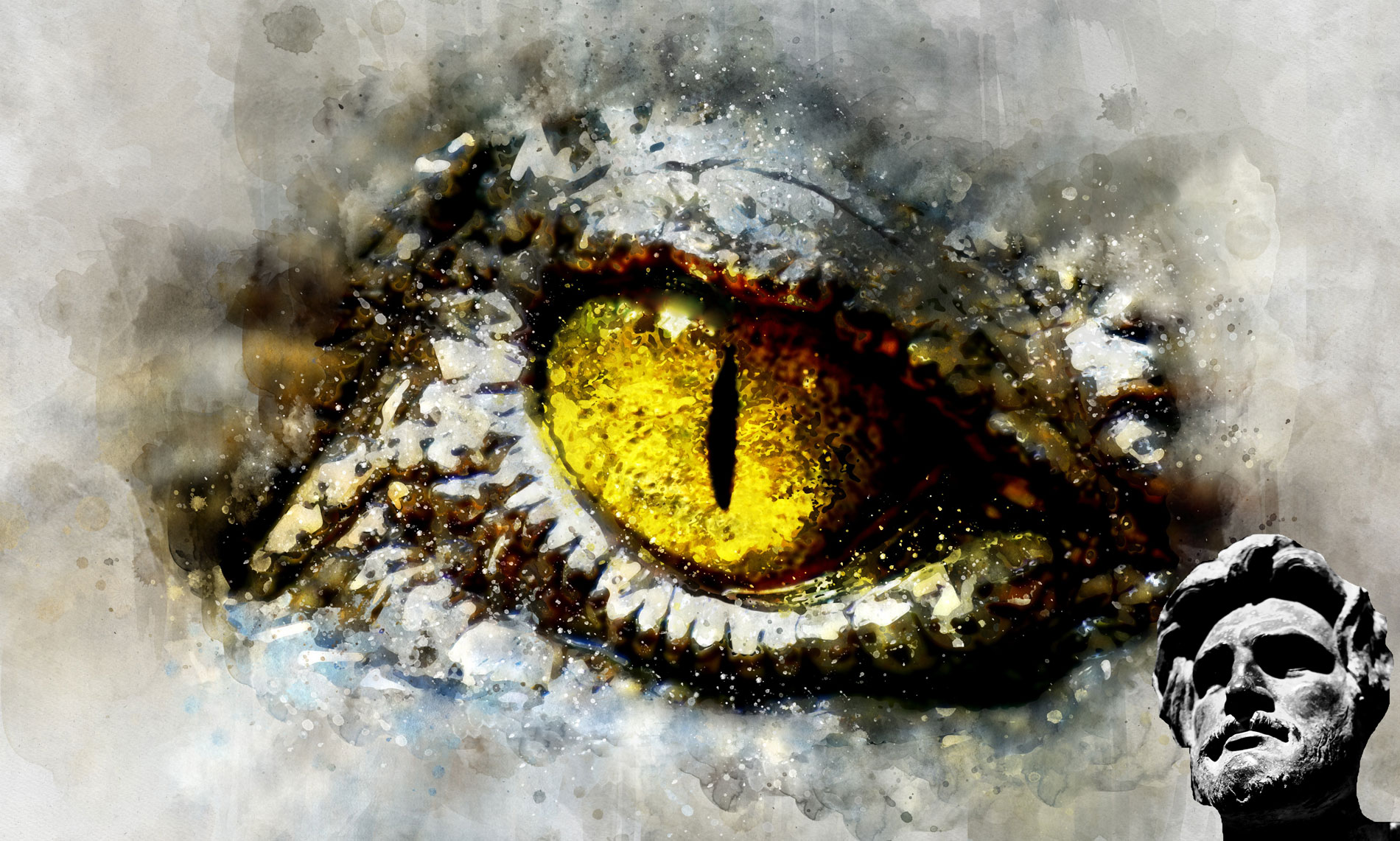 It’s my life going back to the face of Sanghor. A flash of anger stains his eye with a burst of gold. But it does not last, nothing lasts here below. Here above, too. When the weather is longer, it passes faster, we do not realize it.

Sanghor then tells me the thousand adventures of my race. She has lived Myrtho, the young Tarantine. Her soft body rolled under the sea wave. Number of wars, mass killings, an ocean of human blood. They go, they come, never fleeting, never tired, crush the sword with the sword and jump the ditches. What’s left of it, except the smell? A pestilence fades into silence. We made moonlight for our palaces and statues. What does it matter now that we are killed? The nights will fall one by one. China has become common, we made moonlight. No trace is left behind. The earth closes in my steps, do not wait for me. Go your way, my soul. This body that you animate is only a suit too narrow for you. Over time, it wears off, fades and goes out of fashion. Go, my soul. Go away! And please do not look back on your way.

Back to wandering. The long journey is far from an end. I do know that. Eternity keeps the moment alive.