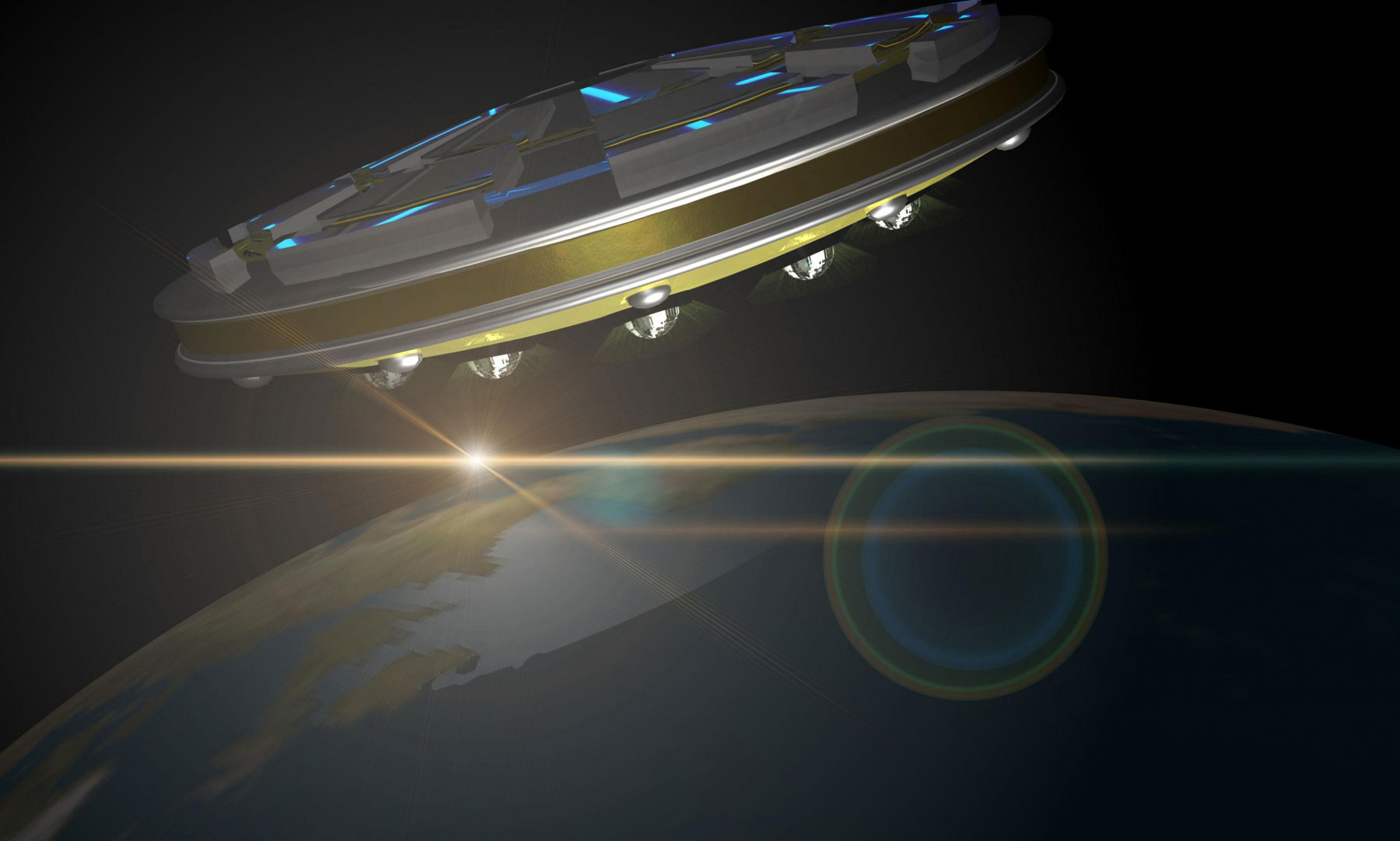 To match the flying machines of ancient Atlantis – or the UFOs which are perhaps of the same origin – we still lack a number of knowledge, including, not the least, the control of gravity.

The Atlanteans mastered a science inherited from the gods, gravitology, which allowed them to move through space faster than light, and to remove the weight of objects. They could move blocks of stone weighing several tons, and they even managed to straighten the enormous mass of our planet. But for us, antigravity remained SF, until an Australian engineer, Ted Roach, sets a cat among the pigeons in astrophysics and cosmology.

What is the common point between a galaxy and a flying saucer? Both are gravitational lenses, answered Roach, who announces he has discovered the technology of gears with controlled gravitation.

“I publish this technology today to prevent it from being retracted into the secret military projects and therefore concealed to the service of humankind. This technology could propel the world to a new level of innovation” says Ted Roach who knows what he speaks about. After his initial researches on gravity, he has been seized his provisional patents by the Australian Department of Defense and the Australian Safeguard Office. He had to emigrate to continue his work in a quiet place.

He delivers today his results in a  book like a bomb which proposes a new definition of graviton. This hypothetical elementary particle transmits gravity in the quantum system. Essential in theory, the presence of the graviton has never been demonstrated so far. What does not stop Roach. To him, not only gravitons exist, but also the gravitons’ lenses: they divert their course by driving the incredible expansion of the universe that relativity does not explain.

“Our solar system, for example, is a flat discoid set in which the sun produces a solar wind composed of positive ions moving at 280 miles/s.

I assume that stellar systems and galaxies are gravitons’ lenses. By diverting the gravitons, they change the structure of the gravitational field and generate the expansion of the universe.”

That will not rejoice Joel Primack, father of the “dark matter” forming 90% of the total matter in the universe.

Primack adds to it the hypothesis of the dark energy, other undetectable phenomenon, to explain this phenomenon: why the universe is in growing expansion, while the great mass of its stars should, instead, incite it to contact? Ted Roach’s hypothesis has the merit of being verifiable. What he did. Initial results have been achieved in Sidney in 2007, using a disc of 1.15 foot in diameter, slightly concave and treated with mercury. We remember the very special role played by mercury in the engines of Atlantean flying machines.

We also remember that the god Mercury with winged feet was the messenger of the gods … Very often, myths have served the gods before transmitting specific messages for men, they include the time comes. Most often, we took these messages to mystical or symbolic, when they dealt with science or technology. The example of Plato’s cave is eloquent.

Placed on a pivot support, the disc has been set into rotation: no weight loss was recorded. The underside of the disc, aluminum-made, was loaded with 400,000 volts. Rotated, the disc showed a weight loss of 24%. Note that the weight loss, and so the antigravity, occured only on a disc loaded and rotated. Moreover, the disc reached 4 yards high in the air, remaining suspended for a moment, before falling down. Certainly this is a modest beginning, but for Ted Roach it is a great victory.

Will we see one day these flying lenses overflight the country of kangaroos? Much better than that! exclaims Ted Roach. Commercial applications are limitless: transports, space conquest, but also heavy lifting, production of clean, renewable energy, telecommunications, medical technology, etc … This high level of enthusiasm is a pleasure to see. Is Roach the new Einstein? Will he be able to carry out his promising work? If the Army bogeyman doesn’t get him …